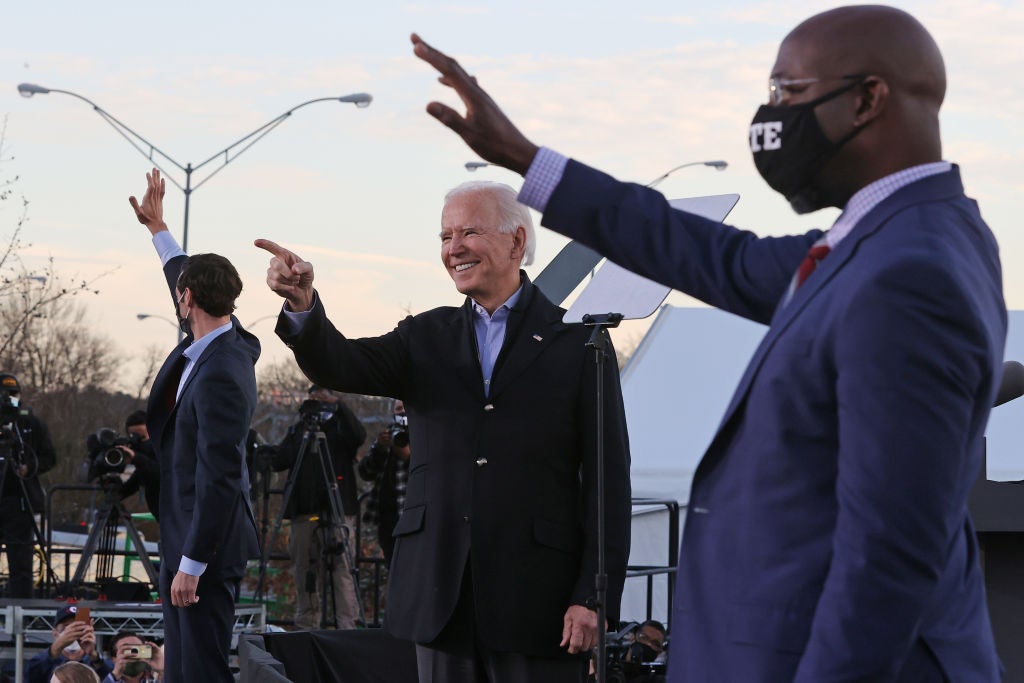 The election of these three men has shifted control of the White House and both houses of the US Congress to the Democrats: (left to right) Senator-elect Jon Ossoff, President-elect Joe Biden and Senator-elect Raphael Warnock. (Photo by Chip Somodevilla/Getty Images)

As the US reels from the shock of violence unleashed by President Donald Trump and his marauding supporters at the Capitol Building on Wednesday, the Democratic Party’s victory in two run-off elections in Georgia means local and state governments across the country can now expect aid for their pandemic-strained budgets in 2021.

The surprise sweep of both of the southern state’s US Senate seats means that on 20 January, incoming President Joe Biden will have a unified Congress controlled by his own party. That has major implications for the fiscal future of US cities, which are facing painful cuts to public jobs and services.

As a result of Covid-19, local governments in the US have seen revenues from sales and income taxes fall while the costs imposed by the pandemic have further burdened their balance sheets. These governments don’t have the capacity to run long-term deficits, so 2021 had looked like it was going to be ugly for the US public sector.

“2021 is going to be tougher,” says Eric Scorsone, a professor of local and state government at Michigan State University, who notes that there are lags in impacts to public finances related to economic downturns and that the pandemic’s effects on property taxes haven’t been felt yet.

“What you’d see is state government cutting local aid and local revenues falling [even further],” says Scorsone, who advises struggling cities such as Flint, Michigan. “You would see service reductions in critical functions like police and fire at a time when service demands are growing, as the pandemic results in homicide and domestic abuse going up.”

Since the earliest days of the pandemic US Senate Majority Leader Mitch McConnell has stood firmly against fiscal support to states, cities and counties, which he characterises as being inefficient and corruptly governed. The Republican leader’s depiction of such aid as a “blue state bailout” bore no relation to reality on a number of levels, but it was nonetheless echoed by the conservative media.

The twin victories in Georgia sharply change these dynamics. Now Democrat Chuck Schumer, not McConnell, is expected to control what legislation gets voted on.

That fact doesn’t guarantee anything. The Democrats’ barest of majorities means many of Biden’s most progressive priorities likely won’t pass muster, because the party will have to keep every one of its Senate votes unified. That includes the most conservative Democrats, including West Virginia’s Joe Manchin and Arizona’s Kyrsten Sinema, who are both on record opposing initiatives like Medicare for All. It could even threaten the possibility of the $2,000 relief checks that Biden has promised if Democrats control the Senate, as Manchin has expressed concerns with such proposals in the recent past.

But even the party’s most conservative member supports state and local aid. Manchin has sponsored numerous bills in 2020 to provide support to these governments, including in the initial compromise legislation he put forward that formed the nucleus of the most recent $900bn stimulus package. (That provision was stripped at McConnell’s insistence.)

The implications of such relief will be profound. Before the surprise results of Tuesday’s elections in Georgia, it looked like the US was locked in an austerity doom loop. Mindless cuts to the public sector would further hinder economic recovery, just as they did after the Great Recession, sucking demand out of the economy. On a more basic level, the morale and capacity of these governments would be reduced just when they were needed to facilitate the distribution of vaccines, reopen schools safely and address rising violent crime rates.

A Democrat-controlled Senate also allows for the possibility of movement on long-frozen legislation for which Manchin and other conservative Democrats have expressed support, like an increase to the federal minimum wage (which has been frozen since 2009). Mass transit agencies are more likely to get the additional assistance they will need to maintain previous levels of service after the pandemic fades.

The conservative Democrats’ priorities are not the only limit to what Congress will be able to pass in the next two years. The filibuster rule, which allows a single recalcitrant senator to block any legislation that does not have 60 votes (with the exception of budget-related measures that can sometimes be moved forward through a process known as reconciliation), will still limit some legislative ambitions. (Manchin has said he wants to preserve the filibuster despite its undemocratic and dark history.)

The ideological battle lines of the new Congress are also not yet clear. It is possible that the chaos stoked by Trump and his supporters, especially the violent storming of the Capitol, could compel some Republicans to move away from the radically obstructionist strategy they pursued when Barack Obama was president. Non-party-line coalitions are possible on issues like land use reform or the Surface Transportation Reauthorization bill (which allocates federal money for streets and transit).

“It is likely that 60 votes will be needed to pass the reauthorisation [of the surface transportation act], and thus Democrats will have to compromise in some ways,” says Yonah Freemark, a senior research associate at the Urban Institute. But politicians in both parties claim that infrastructure is a non-partisan issue, and in theory they could finally act like it.

“I expect that a reauthorisation bill or a major transportation infrastructure stimulus will be passed through a compromise route intended to achieve support from senators on both sides of the aisle,” says Freemark.

The partisan battle lines around zoning and land use reform are not clear-cut, partly because they’ve never really been tested at the federal level. While Trump tried to scaremonger regarding upzoning and affordable housing during the 2020 election, some Republican congressional representatives have supported legislation aimed at deregulating land use.

“Zoning reform has implications outside big Democratic metros: prohibitions on manufactured housing are the rural equivalent of anti-apartment zoning in wealthy suburbs,” says Jenny Schuetz, a fellow at the Brookings Institution’s Metropolitan Policy Program. “Pushing back on regulations that limit housing development could help jump-start construction, a key job sector for economic recovery.”

All of the interviews for this article were conducted before the chaos and bloodshed stoked by Trump in Washington on Wednesday afternoon. The optimistic reflections on the Democrats’ surprise victories in Georgia have since been overshadowed by violent riots in and around the Capitol.

Nonetheless, the fact remains that at the end of this month, Biden will be president and will enjoy a unified Democratic Congress at his back. No matter how slim the majority will be, this gives policymakers in Washington a path around the reflexive obstructionism of the McConnell years and the potential to move forward on some of the policy issues that matter most to US city leaders.