The Covid-19 pandemic has thrown public transportation into chaos.

Sporadic stay-at-home orders and general fear of public spaces have undermined the missions and finances of agencies in North America and Europe. In the US, where Congress is considering offering less than half of the funding that transit groups have requested, the situation looks especially grim, and many major systems are teetering on the edge of a death spiral.

It is unclear how long it will take ridership to recover or if remote-work trends will fundamentally and permanently alter commuting.

“This is a deeper and stranger challenge than we’ve ever faced before,” Beth Osborne, director of Transportation for America, recently told City Monitor. “This is a new kind of emergency.” 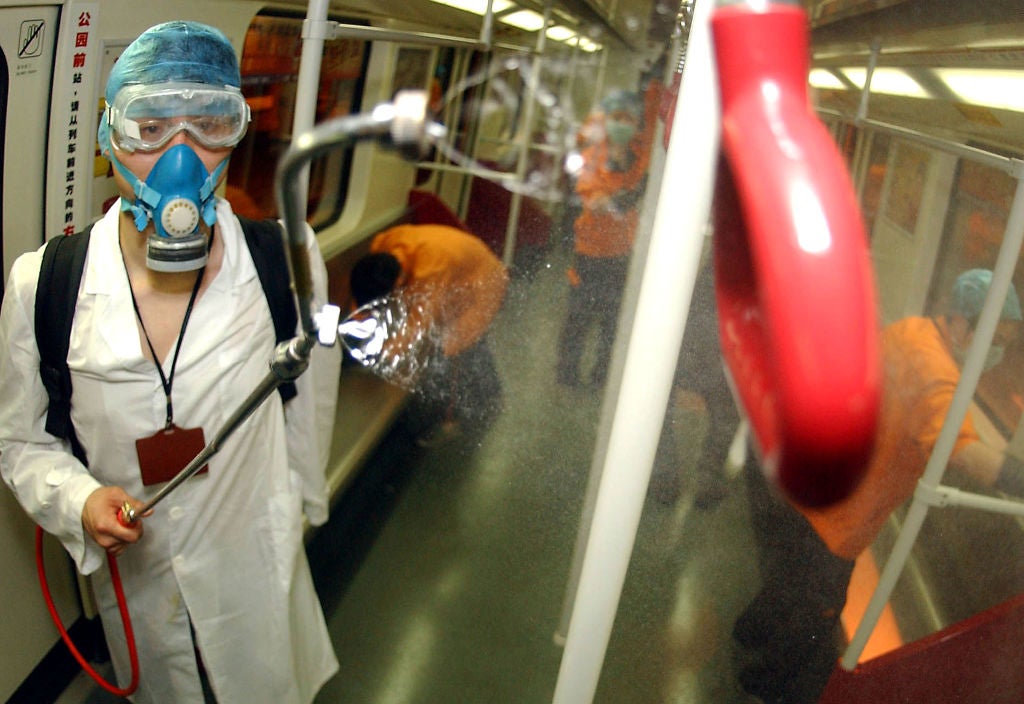 A health worker sprays disinfectant while others wipe clean a subway train in Guangzhou, China, on 16 April, 2003 in the latest effort to fight SARS. (Photo by STR/AFP via Getty Images)

It’s impossible to say what the coming years will look like because there’s no neat, analogous experience with which to compare this pandemic. The 1918 flu was too long ago, and many cities did not have the scale of transit infrastructure they enjoy today. And public-health awareness and official countermeasures were far less robust than they are now.

The SARS epidemic of 2003 was bottled up in a handful of cities, in large part because policymakers were able to successfully act to contain it. Nonetheless, it is the most – perhaps the only – relevant example that can be drawn upon when looking at the effects of a respiratory epidemic on mass transit ridership.

Despite the fact that the 2003 SARS outbreak was so much more limited in scope, both spatially and temporally, than the current pandemic, it is worth zeroing in on some of the cities that suffered the most during those months: Hong Kong, Taipei and Beijing.

Planning and transportation experts say that a number of habits acquired by both passengers and agencies had serious staying power after the SARS outbreak. Most notably, masks became a widespread accoutrement in many cities that were wracked by the contagion, and they continued to be a fixture of transit ridership to an extent that many residents did not need a reminder when the Covid-19 pandemic began.

“Individual behaviour change definitely sustained after SARS, so wearing masks is not mocked after that,” says Yan Song, director of the Program on Chinese Cities at the University of North Carolina at Chapel Hill. “Especially in Taipei and Hong Kong, people began to have this habit of putting a mask in their bag, and [before boarding] they put it on.”

But Song says the measures city governments implemented to attract riders back to mass transit, some of them quite expensive, also persisted. More intensive cleaning regimens were implemented, better ventilation was installed, and trains were run more frequently to ensure they weren’t overcrowded.

Many of these policy changes required extra funding, which of course took an additional toll, as systems were getting less from fare revenues than before.

Month-to-month data for Hong Kong and Taipei unsurprisingly shows dramatic declines in public-transport ridership during the worst of the outbreak. (One study of Taipei found that 1,200 subway users were lost for each new SARS case reported by the news media.) But notably, ridership did not return quickly after the crisis. In Taiwan, it took roughly half a year for ridership to approach normal levels again, even though the peak of the virus there lasted only a month and just 668 people (out of a population of over 22 million) were infected.

Researchers like Monash University’s Graham Currie expect that something similar will happen this time, but with an even longer wait for ridership to return because of how much more widespread the Covid-19 pandemic has become.

Certain types of vehicles will likely see a slower recovery, both because of safety perceptions and because of who tends to ride them.

“Subways and heavy railways will be affected more, because of fears of crowding and being uncomfortable with being locked up in steel tin cans with strangers,” says Currie, who is a professor of transport engineering at the Melbourne school.

He has been conducting research on how transit agencies are coping. Currie notes that in three cities that had done an exceptionally good job of containing the Covid-19 pandemic – Auckland, Oslo and Vienna – none had seen full ridership return. In all of these cases, even when Covid was virtually eliminated from the community, only about 80% of riders came back.

He expects that riders will eventually fully return to transit, especially after congestion and parking gets bad in central cities again. But that could take years. Will there even be functioning transit systems to serve as an alternative when riders try to come back?

Currie says most governments understand that public transit is an essential service that must be provided if their most economically productive cities are to remain functional. Even though US politicians in Washington, DC, are unlikely to supply the public-transit support that the moment calls for, Auckland, Vienna and Oslo (and their respective national governments) are providing that aid now. Back in 2003, Beijing, Taipei and Hong Kong did what they had to do too, and their respective governments did so again in 2020.

“In so many ways, when Covid-19 came along, those cities did the same thing they did in 2003,” said Currie. It wasn’t just mask wearing and other safety measures – they also quickly provided fiscal backing. “They just said, well, subsidies have to keep going for a while. They learned that they have to have mass transit systems; otherwise, they don’t have their cities.”