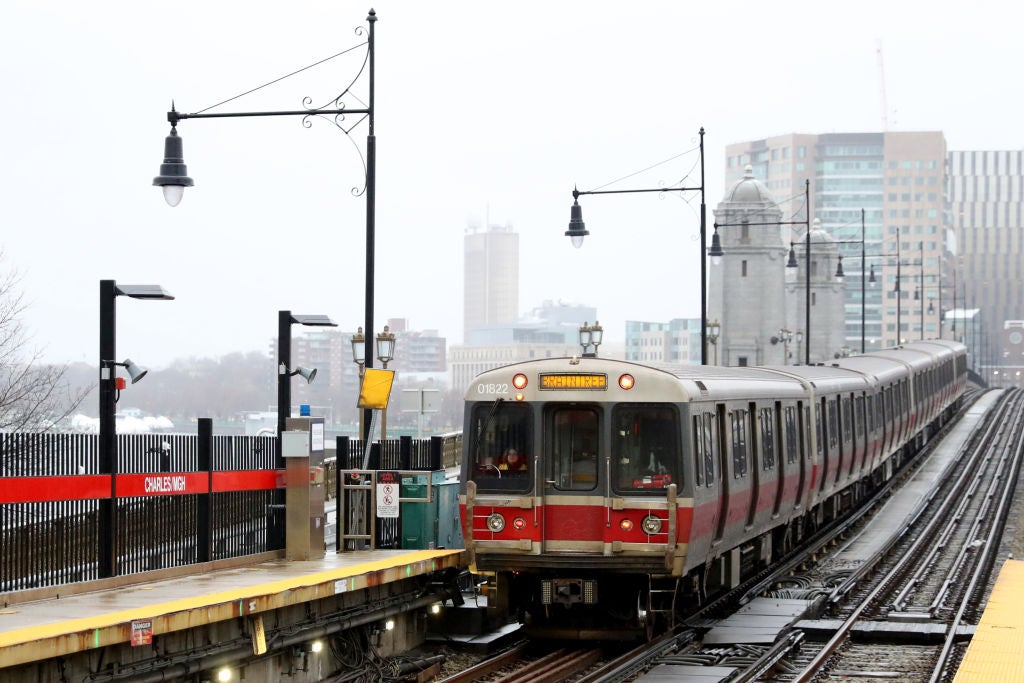 A view of a Red Line train pulling into Charles/MGH MBTA station in March 2020 in Boston. (Photo by Maddie Meyer/Getty Images)

No big-city mass transit system in the US is looking at a secure future, but each transport agency has prepared for doomsday in its own particular way.

Facing a staggering $600m funding hole in the next budget year, the Massachusetts Bay Transportation Authority (MBTA) last month announced massive cuts. The heaviest toll would be on modes tending to serve white-collar commuters, who are largely working remotely. Weekend and evening commuter rail would be eliminated and ferry service scrapped entirely.

Service within the city centre would be reduced too, but to a much lesser extent. In comparison with cities like Washington, DC – where weekend Metrorail service could stop entirely and 30-minute frequencies instituted all day – the bulk of Boston’s public transportation riders look like they would be getting off comparably lightly. In June, the New York-based non-profit TransitCenter estimated that the US’s mass transit systems face a collective budget hole of $21.75bn next year.

For Jarred Johnson, executive director of the Boston-based advocacy organisation Transit Matters, the MBTA’s targeted cuts come with their own worries. In recent days, the MBTA has modified its doomsday scenario, preserving some amount of ferry service and the most heavily used weekend commuter lines (but moving up the implementation date for reductions). Johnson argues that slashing commuter rail, which tends to serve higher-income riders, would make the MBTA politically weaker.

That dynamic could exacerbate the inequalities that lie at the heart of why US mass transit systems are now facing an existential threat – while their counterparts in many other wealthy countries feel secure in their ability to survive the pandemic intact.

“Boston is one of the few [US] cities where the relatively well-off ride transit,” says Johnson. “That’s why the Boston system is so well resourced: wealthier, whiter folks ride. If they go through with these cuts, we could potentially lose champions in the legislature.”

The MBTA is going to need those champions in the years ahead, especially as almost half of its funding comes from the state of Massachusetts. As the US Congress attempts to finalise a stimulus package that would include some money for mass transit (though less than half of what advocates were pushing for) but none for states and cities, it is likely that support from within the state legislature will be under serious threat. Both the governor and the legislature have already indicated that they plan to reduce the state’s commitment to transit.

That could mean these service reductions are just the beginning. Transportation activists fear that cuts to mass transit will induce a death spiral, where fewer residents choose to ride infrequent and inconvenient trains and buses, leading to further declines in fare revenue and reduced political support, all of which lead to still more cuts.

“I don’t think any of these transit services can survive if there is not another stimulus bill passed,” says PS Sriraj, director of the Urban Transportation Center at the University of Illinois at Chicago. Specifically, more dollars from Washington are needed to fund operations. Although historically the federal government only supported capital spending and operating budgets, since the 1980s it removed most of the latter supports from major operators.*

“The need is so far greater than what the local and state entities can provide,” says Sriraj. “If the feds are not able to, then you’re looking at a situation where significant cuts have to be made, laying off the workforce, and there’s going to be so many cascading effects from that.”

In this looming disaster, the US is an outlier among the world’s wealthy nations. That’s partly because US leaders utterly failed to respond to the pandemic, so viral cases have been persistently high and far fewer people have returned to workplaces. As public fear kept the cautious off trains and buses and the commuting public radically shrank, fare box revenues were low all year.

By contrast, most rich East Asian and Pacific nations got the virus under control quickly, and life has largely returned to normal. European nations and Canada fought down their first waves, and ridership increased again in the summer as people went back to their offices and got on with their lives – until the second wave hit. Further stimulus has already been delivered in some cases, like in London, while transport advocates in Germany, France and Canada have no doubt they will get the funds they need to maintain service in the medium term.

“Our government has committed gigantic sums to transit systems, but it has so mismanaged the coronavirus that their needs are much larger.”

This isn’t to say that the US federal government hasn’t supported transit in 2020. In the early days of the pandemic, Congress was able to shake off its extreme case of gridlock and enact the CARES Act stimulus, which provided $25bn to keep the trains running. Lawmakers in Washington acted far faster at the beginning of the crisis than their counterparts in Canada or Europe.

Fast-forward nine months and the situation is once again dire.

“Our government has committed gigantic sums to transit systems, but it has so mismanaged the coronavirus that their needs are much larger,” says Yonah Freemark, a senior research associate at the Urban Institute, a think tank based in Washington. “The transit systems are just the most visible thing. The losses that cities and state governments are going to experience in the coming years, all the public services that rely on user fees are going to be crushed by the Covid situation.”

That’s why advocates like Transit Matters’ Johnson are warily watching how cuts today could reduce the constituency for transit later. They know what public transportation looks like in the rest of the US, outside a handful of major cities, where it is seen as a service of last resort for the poor and the elderly.

“Once a system gets above a certain percentage of its riders’ being low-income minority, the quality drops because that’s when elected leaders stop paying attention,” says Johnson, who grew up in Oklahoma City, where he says he saw that exact paradigm play out.

The marginalisation of transit in the US is also the result of a two-party political system with institutions – like the US Senate and many state legislatures – that empower rural and exurban areas at the expense of urban centres. In recent decades, these systemic quirks have lined up with the Republican Party’s increasing dominance of those very geographies, leaving an empowered minority party with little incentive to adequately fund, let alone expand, services that are most used by city residents, who don’t tend to vote for conservatives.

“Republicans have disappeared from the congressional delegations of the Northeast Corridor, which is where the heaviest mass transit use happens,” says Steven Conn, a professor of history at Miami University and author of Americans Against the City. They’ve largely vanished from other relatively transit-rich jurisdictions, too, like the Chicago region and California.

“Power politics is absolutely in play,” says Conn. “There is no incentive for Republicans to back public transit, because you can’t tell the folks back home that it’s important.”

As much of the Republican elite have embraced culture war rhetoric and extreme partisanship, that posturing has infected their transportation policy. The 2016 party platform called public transit “an inherently local affair that serves only a small portion of the population, concentrated in six big cities”, and promised to end federal funding for it. (In 2020, the party adopted the same platform.) 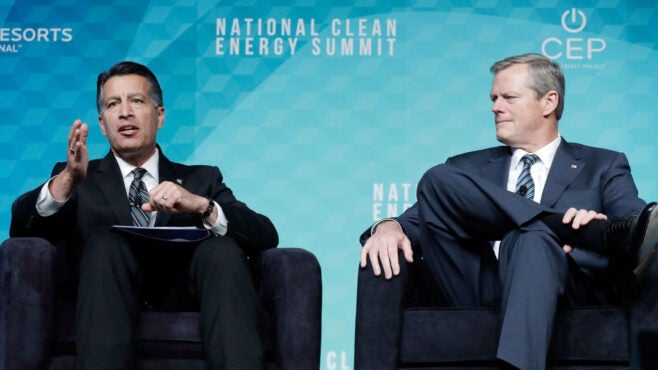 In recent months, public transportation has not become a flashpoint in stimulus negotiations, unlike state and local government funding, but Republican Majority Leader Mitch McConnell’s proposal included no money for the beleaguered systems. While transit lobbyists on Capitol Hill report that some Republican senators say behind closed doors that they are willing to vote for transit funding, it is not an issue they will fight for.

That’s why the $32bn in relief that organisations like Transportation for America and the American Public Transportation Association called for has been reduced to $15bn in the bill that looks likely to pass in the coming days. (As a point of reference, the nation’s largest transit system, New York City’s MTA, is seeking $12bn to right its capsizing finances.)

Although current stimulus negotiations promise some immediate relief, the medium to long term does not look as hopeful. Even as newly available vaccines promise a return to something closer to normal, previous viral outbreaks have repressed public transport ridership for months after diseases have been brought under control. That means fare box revenue won’t be back to pre-pandemic levels anytime soon. State and local governments are being forced into austerity by McConnell, who has declared these lower levels of government special interests that should not be bailed out. That too will undermine key sources of transit funding.

All of this comes at a time when heightened attention is being paid to climate change. In the US, transportation accounts for 28% of greenhouse gas emissions, with private automobile use amounting to two-thirds of that total. It doesn’t take a Green New Dealer to see that reducing the US’s reliance on driving will play an important part in addressing climate change.

In Boston, Johnson is warily watching as Massachusetts Governor Charlie Baker, a moderate Republican, is embracing the idea of austerity for the MBTA. Although he has tried to stake a position as a centrist on climate change and environmental policy, Baker has said he is not willing to raise the gas tax or tolls to stave off cuts to public transportation.

“We know what the future needs to look like,” says Johnson. “Nothing this year has made climate change any less worse. To abandon transit is foolhardy.”

*This article has been updated to clarify the level of federal government support for the operating costs of American transit systems.
Topics in this article : Mass transit