Two weeks ago, sitting in isolation in his Toronto apartment, Vincent Puhakka realized that the public transportation system he’s built his life around might never fully recover.

Like their counterparts across the world, Canada’s transit agencies are seeing precipitous declines in ridership and revenue — by some estimates, more than 70%. 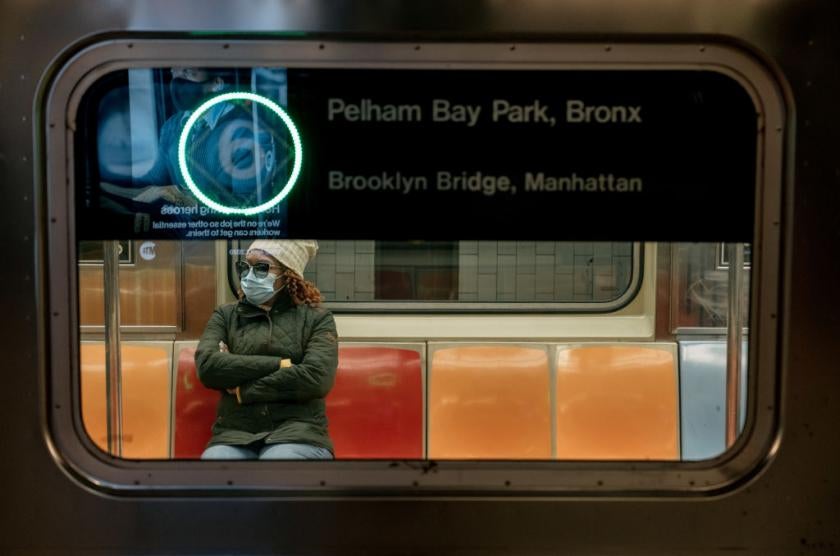 A commuter wears a face mask while riding a subway train on 17 April 2020 in New York City. (Photo by Scott Heins/Getty Images)

But the Toronto Transit Commission must continue providing robust service – while at the same time committing additional resources to deep-cleaning its vehicles – to ensure that essential workers can traverse Puhakka’s city.

On the other side of the country, in Vancouver, transit ridership has plummeted in a similarly spectacular fashion. On 14 April, Vancouver’s TransLink pleaded with the national and provincial governments for a bailout so it can continue to provide service despite its devastated budget. Relief hasn’t been immediately forthcoming.

“It hit home for me when we found out that the government would not provide emergency funding for Vancouver’s transit,” says Puhakka, who is a member of the transit advocacy group TTCriders. “Honestly, it made me feel a little powerless. I still do”.

Toronto’s public transportation system faces the same dire challenge, and Puhakka believes the national government will be equally uninterested in providing aid to the Toronto Transit Commission. That speaks to a larger flaw in how political elites see public transport, he says, which isn’t always perceived as an essential service like water or roads.

Puhakka fears what the sluggish reaction to mass transit’s needs in Canada may foretell about public transportation’s future.

“It’s depressing to realize the mode of travel you’ve chosen, that you believe is the best way to get around, isn’t valued at all by your government,” says Puhakka. “They certainly aren’t shutting down highway maintenance”.

Transit agencies around the globe are confronting similarly intractable dilemmas, from the San Francisco Bay Area’s BART – which relies on fares for almost three quarters of its operating budget – to local transit operators in France, which rely more heavily on payroll taxes. No matter whether they get the bulk of their operating funds from the fare box or through local and state taxes, mass transit systems across the Western world are facing serious shortfalls.

As ridership and revenue streams plummet, the question now becomes whether  governments will heed calls for unprecedented infusions of cash to maintain public transportation during the crisis. And after the pandemic wanes, whether they can be convinced to continue funding beleaguered systems that will surely need help to return to normal levels of service.

It is far from certain that transit agencies will get what they need, leaving many experts concerned that public transportation may be crippled for years to come.

Outside of the $25 billion in aid to transit operations in the United States CARES Act and  £400 million for bus companies in England, few developed nations have yet to provide a bailout for public transportation.

“We are in the middle of the conversation [in Western Europe],” says Sylvain Haon, senior director of strategy at the International Association of Public Transport in Brussels.

In Italy, transit agencies are asking for €600 million to cover initial losses and another €500 million for the rest of the year, says Haon. Paris’s regional transit system is seeking €1 billion in aid from the French government. Meanwhile, the Canadian Urban Transit Association says its members will need $400 million a month to keep services intact.

Even the United States’s unusual display of transit generosity in the CARES Act won’t last long.

“The stimulus money will help them operate a barebones schedule, but it won’t let them get back to where they were,” says Megan Ryerson, of the University of Pennsylvania’s Department of City and Regional Planning. “Do I think they will eventually get the amount of money needed to return to pre-Covid levels? That seems unlikely given the extreme losses they’ve all had in the past month”.

In the U.S., transit advocates on Capitol Hill say they were pleasantly surprised by how few barriers there were to the initial call for aid. Both the Senate Republican proposal and the House Democratic proposal offered similar amounts of funding for transit.

The CARES Act represents the first time mass transit systems in the United States have received support for their operations from the federal government since the 1980s. Usually federal assistance is limited to capital projects.

“We didn’t have to make a really strenuous case about it,” says Beth Osborne, director of the advocacy group Transportation for America. “It was a really different feeling going to Congress [this time]”.

Still, no one believes the money from the CARES Act will be enough. In Philadelphia, the Southeastern Pennsylvania Transportation Authority received $643 million, but the Authority estimates that its losses will surpass that by early summer. The Metropolitan Transit Authority in New York City received $3.7 billion from the CARES Act, but the Transit Center projects America’s largest public transportation system will need as much as $8 billion more by year’s end. Overall, the research organisation thinks mass transit in the US will need between $26 billion and $38 billion to make it through 2020.

It is far from clear how much more aid can be expected from the federal government. Conversations about a new round of stimulus have turned rancorous. Democrats are demanding funding for local and state governments, which are facing apocalyptic shortfalls, while Republicans accuse them of holding up a relief package they want to offer solely to small businesses.

President Donald Trump’s penchant for using the crisis to punish his political enemies and help his partisan allies also makes some experts fear for transit agencies that are essential to urban areas, which are almost exclusively represented by Democrats.

“With everything our president is doing, he is more against the big cities,” says Vukan Vuchic, professor emeritus of electrical and systems engineering at the University of Pennsylvania and a longtime observer of public transportation policy. “We do have that problem with transit also”.

Still, some are cautiously optimistic about using the crisis as a moment to reframe how we think about public transit and its funding. The transit consultant Jarrett Walker argues in CityLab that it’s time policymakers understand that “transit makes urban civilisation possible,” and then spend accordingly.

Osborne, of Transportation for America, says that during the CARES Act negotiations lawmakers from both parties saw that preserving transit systems was necessary for ensuring that essential workers like nurses, grocery store clerks, and home health aides could get to their jobs safely.

“A lot of the past arguments about transit never came up, the notion that buses should be jammed full of people to be justified was not an issue,” says Osborne. “Congress at first didn’t think we needed to get to transit immediately. But they responded pretty quickly when we showed them the numbers. That was really different from anything I’ve experienced”.

Osborne wonders if the need for a federal bailout in the United States was especially acute because transit is so poorly funded in comparison with its international counterparts. Perhaps as the crisis drags on, other countries will start spending more on their systems too.

But international transit advocates are anxious.

“This is calling for some very stark choices,” says Matti Siemiatycki, an associate professor of planning and geography at the University of Toronto. “Either we’re going to get government subsidies very quickly to keep the services going, or there’s going to be dramatic cuts”.

So far Canada’s stimulus has focused on individual and business relief. “Everyone has said they recognize that this is an issue, but no money has started flowing yet,” says Siemiatycki.

For Puhakka, the issue is existential. In the midst of the crisis, essential workers need to get to work. One of his friends works in the social housing sector and still rides the train to help her clients with their utility and health care needs. Service cuts would hamper her ability to work and rob already disadvantaged city residents of the help they need.

Puhakka fears that in the long run, ridership will likely remain low even after the worst of the pandemic recedes. People may shy away from buses and subways and rely on cars and bikes instead, potentially crippling transit systems that rely heavily on farebox revenue. That means operations support from higher levels of government will need to continue into the medium-term future.

If they do not, cities will have to live with weaker mass transit systems.

“If ridership declines, and then stays low, we’re screwed,” says Puhakka. “But this is how a dense city is able to function. After the crisis there still isn’t going to be room for everyone to have a car”.