Public transportation has never known a period of uncertainty and upheaval like the Covid-19 pandemic. While most transit authorities and policymakers are promising to maintain their commitments in the months and years ahead, substantial questions loom over the future of downtown office districts, the extent of remote work in the future and a widely theorised exodus from the urban core.

Like any major city, especially in nations where Covid has run amok, Montréal is grappling with these questions as ridership levels have sunk to previously unfathomable lows. But this radical restructuring of transit demand comes just as public transportation in Montréal is seeing a major expansion and as advocates and policymakers are generating big plans for the future.

“[We want to] use public transport infrastructure and investments to create jobs and build long-term and sustainable assets within the region,” says Daniel Bergeron, chief planning officer of Autorité Régionale de Transport Métropolitain (ARTM), the Montréal region’s transit-planning organisation. “We are using public transportation as leverage to restimulate economic recovery. We really need short-term action consistent with this long-term vision.” 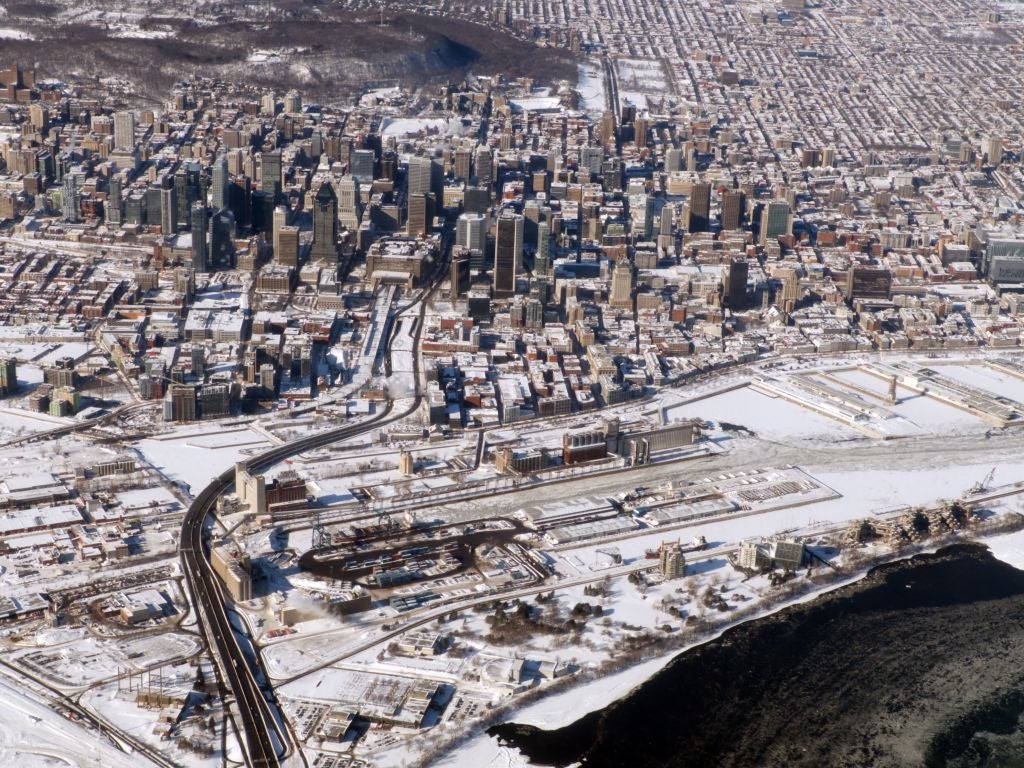 The pandemic struck as the region was building a massive new light-rail line to provide service to the west side, adding almost 70km of transport (which is roughly the length of the current metro system). This first major rail expansion since the 1980s is being accomplished through a complex public-private partnership involving the province’s massive pension fund. This first-of-its-kind plan went even further at the end of 2020, announcing an additional 32km of light rail for the city’s east side.

These plans fit well with the vision of ARTM, which was created in 2017 to organise transit planning across the region’s multiplicity of systems. Actual operations are left to agencies like Société de Transport de Montréal (which runs the city’s subways), but ARTM is enacting reforms such as simplifying the regional fare structure to allow smoother transfers between various transportation modes and transit systems.

How to get riders back on trains

When Covid struck, the nascent transit-planning agency was about to submit its ten-year strategic plan. In March, ARTM will finally release the document, updated to account for trends accelerated by the pandemic, launching an ambitious effort to steer more residents into public transit and out of their cars.

“The government wants to use those infrastructure projects to rebuild the economy, so that’s good news,” says transit activist Francois Pepin, chairman of the board of directors of advocacy group Trajectoire Québec. “I think the projects will continue. Transit authorities in Québec have maintained their service levels the same as 2019. That’s good news because people will go back if the services are offered. If there’s not enough buses or Metro crews, people won’t go back.”

But getting substantially more riders on transit may be a heavy lift, even in the absence of a deadly respiratory illness.

The immediate challenges are substantial, of course. In the early months of the pandemic, ridership collapsed everywhere, sending transit systems into a fiscal crisis. In May, Trajectoire Québec conducted a survey of transit users, and a full 25% said they would not use transit again.

Such a strong reaction wasn’t surprising in the heat of the first wave, but it is unclear how long that sentiment might hold up. Research based on the experience of the 2003 SARS epidemic and cities where Covid has been eliminated, like Auckland, New Zealand, suggests that lingering fear depresses ridership even after a disease is suppressed. But in a worst-case scenario, downtowns could see a permanently depressed ridership.

Then there are the structural challenges. Although Montréal itself is one of the most public-transportation-rich cities in North America, the metropolitan area covers four million people and 83 municipalities. Most of them are beyond the central city, where transit access is densest, and only about 25% of daily peak-hour trips in the region were made by public transportation prior to the pandemic. That proportion has been roughly consistent for decades. ARTM’s goal is to drive that total up to 35% in the next decade, which outside experts say is a radically ambitious goal.

People will go back if the services are offered. If there’s not enough buses or Metro crews, people won’t go back. Francois Pepin, Trajectoire Québec

As the plague year unfolded, policymakers realised that their goals would have to change to reflect the new reality. Some of ARTM’s core strategies remain the same, like encouraging density and a mix of uses around stations and increasing transit-oriented commuting. But others have been altered by the past ten months.

“What changed between now and before is a larger part of this increase of services will be now not during the peak hour period but all the time,” says ARTM’s Bergeron. “That’s a quite specific impact of the pandemic – all-day services rather than mostly centred around the am-pm peak period.”

Other elements that have received renewed emphasis include more bus rapid transit and increased connectivity between communities without a radial connection to downtown.

ARTM’s strategic plan and the new light-rail extension proposed for the more working-class east end are the exact kind of grand proposals that advocates hoped to see emerge from the turmoil of Covid-19.

Where can public transit compete best?

Pepin and Bergeron expect that many white-collar jobs will return downtown but that office workers will be given the opportunity to work from home a few days a week. Some positions will be made entirely remote. The International Association of Public Transport agrees and argues that moving forward, transit operators should offer less service during their traditional commuter hours but more at other times of the day.

That gives cities like Montréal an opportunity to refocus resources on those who are still riding transit even at the worst time to do so in modern history.

In the major cities of many wealthy nations, as downtown commuter traffic almost vanished, other kinds of workers in the low-wage service industries, healthcare, construction and the public sector still had to go to their jobs. Routes between suburban communities or urban neighbourhoods beyond the core of Montréal were busier. Even with lockdowns and curfews in effect, this December transit ridership in the region was at 36% of 2019 levels.

In many North American cities, bus lines tend to serve a more working-class ridership and are deployed more evenly around the city. They can operate in more of an orbital fashion, moving residents between suburbs or urban neighbourhoods that do not have downtown’s job density. These routes remain relatively busy during the pandemic.

“We’re going to see a greater focus on all of the lower-income people that we are forcing to buy cars by virtue of having inadequate transit service,” says Jarrett Walker, a prominent transit consultant who has worked in Canada. “The market that we can compete for most effectively, and that in many cases we haven’t been allowed to before, is going to be people who already have good reason not to ride and whose lives could be improved by not having too many cars.”

ARTM’s strategic plan seems to align with these priorities. In many of these non-downtown areas, where transit use has held up better, buses are a better option than trains, especially for adding more capacity quickly. Bergeron says that in Montréal, transit service is best from north to south and that many areas, especially in the eastern part of the city, are neglected. Enhanced east-west connectivity would be a particular boon for these areas that are not now connected by rail.

“East and west is typically an area where improvement in bus services might be really efficient and quite fast to implement,” said Bergeron, “and implementing fast bus services within each zone of the region, with the help of bus reserve lanes, is definitely something we want to do.” 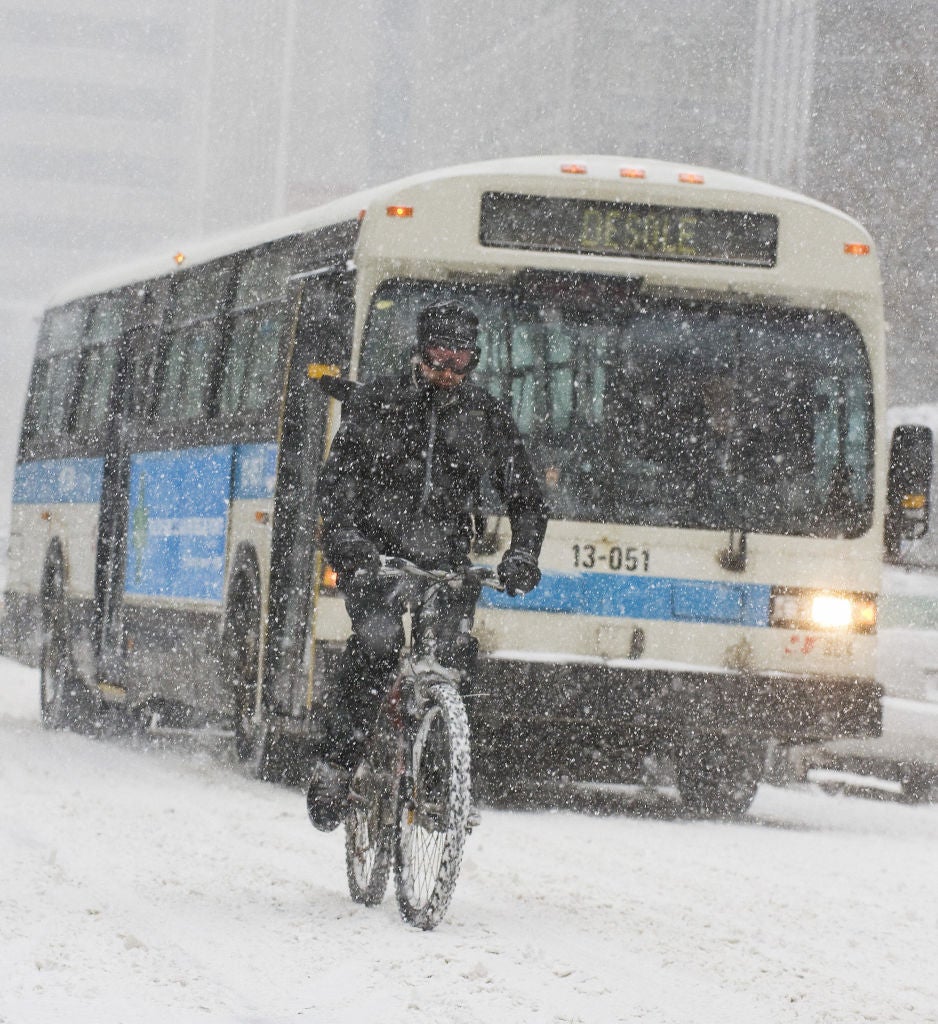 A man rides a bicycle in Montréal during a winter snowstorm. (Photo by Rogerio Barbosa/AFP via Getty Images)

Montréal’s oldest and most heavily used commuter rail line is also being bent to a more equitable end. Last year, it was scrapped, as ridership was low anyway, and will be replaced by a light-rail line that offers shorter carriages that come more frequently.

Among ARTM’s various ambitious proposals in its strategic plan, the biggest contributor to shifting substantially more people out of cars and onto transit will be the brand new light-rail projects that are bringing trains to neighbourhoods that never had them before. Around the time when ARTM was being created, a separate set of institutions, including the provincial pension fund and even the federal government (which rarely involves itself in public transportation), came together to create a new rail system.

“ARTM has the mandate to do planning for the region, but only after this project was initiated,” says Craig Townsend, associate professor of geography, planning and environment at Concordia University. “It was done really ad hoc, out of nowhere. It’s a strange set of circumstances. ARTM is trying to rationalise something that’s already under way.”

Townsend is sceptical that the light-rail system will be as expansive as the current plans outline. The original project, which is under way, has already suffered a series of delays. Financing for a spur to the airport has evaporated, as the airport authority is suffering a Covid-related financial crisis. It is not yet clear if the provincial or federal government will foot the bill.

That’s why the announcement by Québec Premier François Legault and Montréal Mayor Valérie Plante that a massive $10bn extension to the east of the island shocked Townsend. This extension would also be operated under a public-private partnership, when the fare revenues from transit look more tenuous than ever.

But for Pepin, it cannot be a bad thing that policymakers are committing to revolutionise public transit in neighbourhoods that have been traditionally ill-served by transit. He remains confident in the future, even as Québec has struggled through rising infection rates, lockdowns and curfews. And if politicians and bureaucrats start to get squishy on transit, he’ll be ready.

“We have to be vigilant because the first reflex of the politician with the pandemic was to cut services,” says Pepin. “He wants his money back because there is no one on the system right now. But they have to keep the service; as we’ve seen, there are all these essential workers who do not have a car.”