“Ban cars” has become a clarion call of contemporary urbanism.

Whether it’s grand car-free plans in Paris, the evolution of deeply rooted traditions in Amsterdam and Bogotá or the patchy beginnings of car-free streets in Seattle, citizens and city leaders around the world are pushing to reorient urban areas away from cars in favour of pedestrians, cyclists and mass transit. 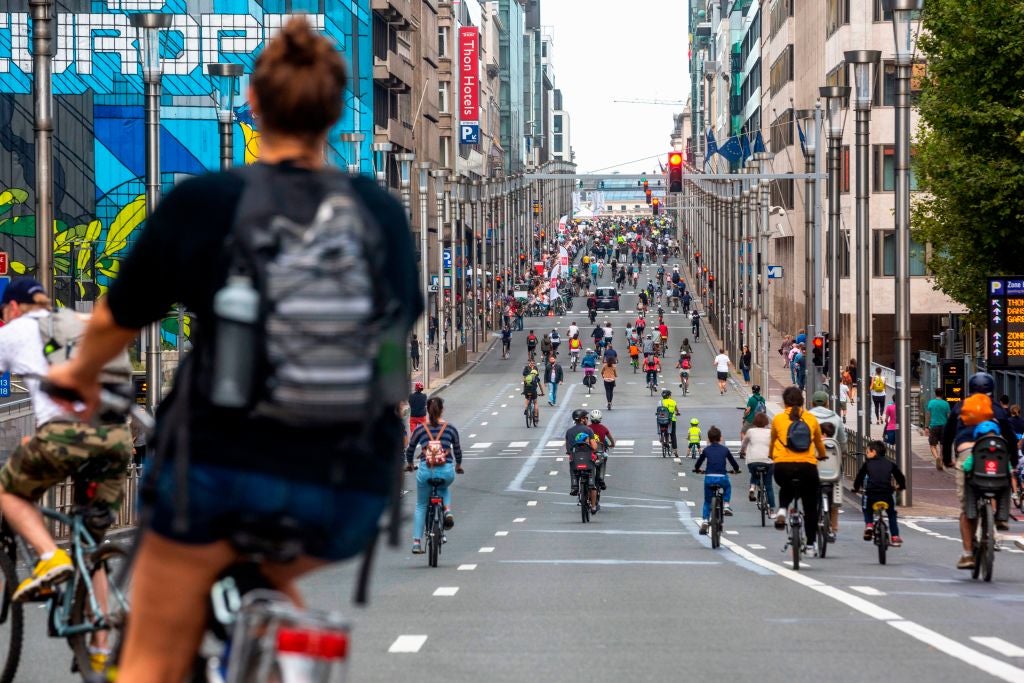 Cyclists and pedestrians enjoy a Car Free Sunday event in Brussels in 2019. (Photo by Hatim Kaghat/AFP via Getty Images)

On a small scale, the goals are relatively simple: a ban on cars on individual blocks, streets or neighbourhoods generally makes those places safer for walking, cycling and socialising while also cutting down on air and noise pollution caused by motor vehicles.

On a larger scale, the goals are more profound, envisioning a culture shift when people and cities realise they can create spaces that don’t depend on cars. At that level, the movement to ban (or severely restrict) automobiles is viewed as a solution for traffic congestion in urban areas, as a way to cut carbon emissions and as a tool to design more-livable cities.

What happens in a city without cars?

Urbanists and city leaders can’t test many of their ideas in a lab – cities are too immense, too complex and too interconnected to observe in a controlled setting. But a naturally occurring experiment emerged in the first half of 2020, when the coronavirus pandemic prompted lockdowns that virtually emptied streets. The moment provided an unusually broad glimpse into an increasingly important question: what happens when a city gets rid of cars?

While several cities had already demonstrated successful designs and policies to restrict cars, the Covid-19 pandemic brought a radical shift in traffic conditions that couldn’t be ignored. Rush hour disappeared in Los Angeles, per INRIX, a firm that analyzes global traffic data. Many European cities saw 80% less traffic during the peak of the shutdowns, according to navigation app TomTom. And per UK climate site Carbon Brief, 2020 will see the largest annual decline in carbon dioxide emissions. 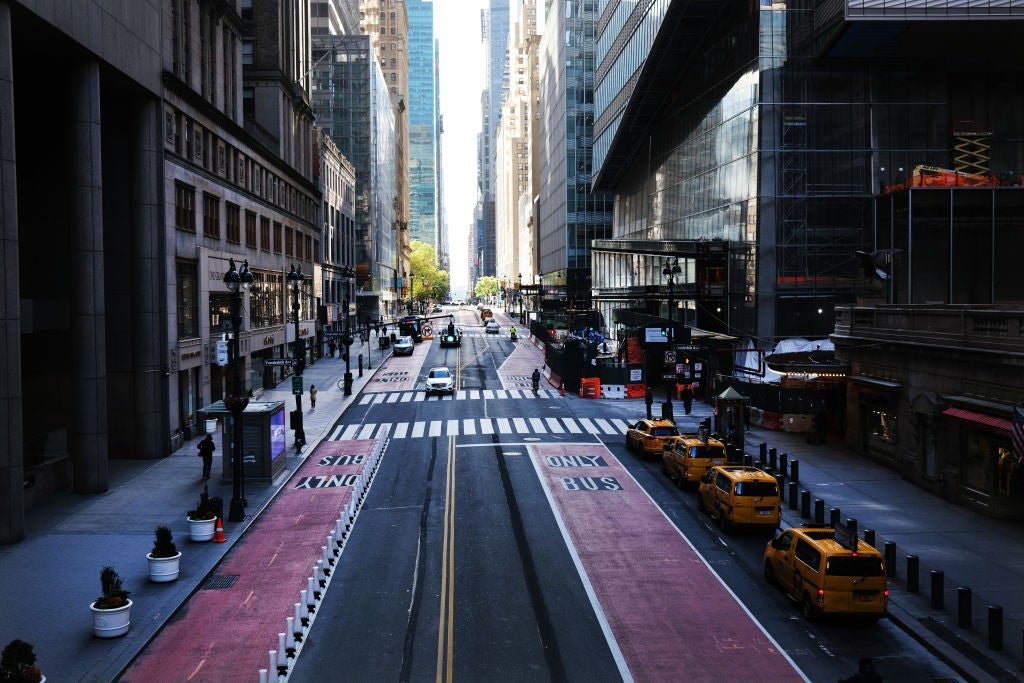 In many ways, the most significant changes were less about space and more about attitudes. Restricting cars from even tiny stretches of road space can be incredibly contentious: as one example, Seattle’s Stay Healthy Streets plan faced complaints over a rushed process that lacked public input, as well as criticism that the benefits were concentrated in wealthier and whiter parts of the city.

But throughout the pandemic, cities that implemented car-free streets saw people flock to them for exercise, food and leisure. By 2020, there was a solid body of evidence that this could be the case, but suddenly people were exposed to the concept on a level that didn’t seem possible before.

The public-health case for banning cars

The Intergovernmental Panel on Climate Change estimates that 80% of the rise in global emissions between 1970 and 2010 came from road vehicles, which are responsible for a quarter of the particulate matter in the air (relatively large solids that lodge in the lungs and bloodstream and lead to severe health issues). The International Energy Agency predicts global urban transportation emissions will double from 2014 to 2025, with 90% coming from private vehicles. Oversized SUVs now emit more megatons of carbon globally than the UK and Netherlands combined.

Cars cost cities dearly in so many other ways, too. Traffic safety is a “hidden epidemic,” according to the UN Department of Safety and Security, with 1.3 million people dying in car crashes each year. Road crashes kill more 15-to-29-year-olds annually than HIV/AIDS, malaria, tuberculosis or homicide.

What’s more, there are health advantages to be gained when people swap car trips for more active forms of commuting. Studies have found cycling yields significant health benefits compared to other forms of commuting, and a comparative analysis of cycling and health in European cities found that all cities would benefit from attaining Copenhagen’s high level of cycling activity.

Cars also rob us of space, time, and money. The United States boasts two billion parking spots for about 250 million cars, with many downtowns devoting 50% or even 60% of their real estate to vehicles. Urbanisation, poor infrastructure, and rising vehicle ownership have made congestion a global pain; in 2011, a global IBM survey found that urban drivers spend an average of 20 minutes per trip finding parking. Finally, transit plans that prioritize cars lead to inequitable situations for the poor, including more exposure to pollution, accidents, and noise.

How does a city actually ban cars? 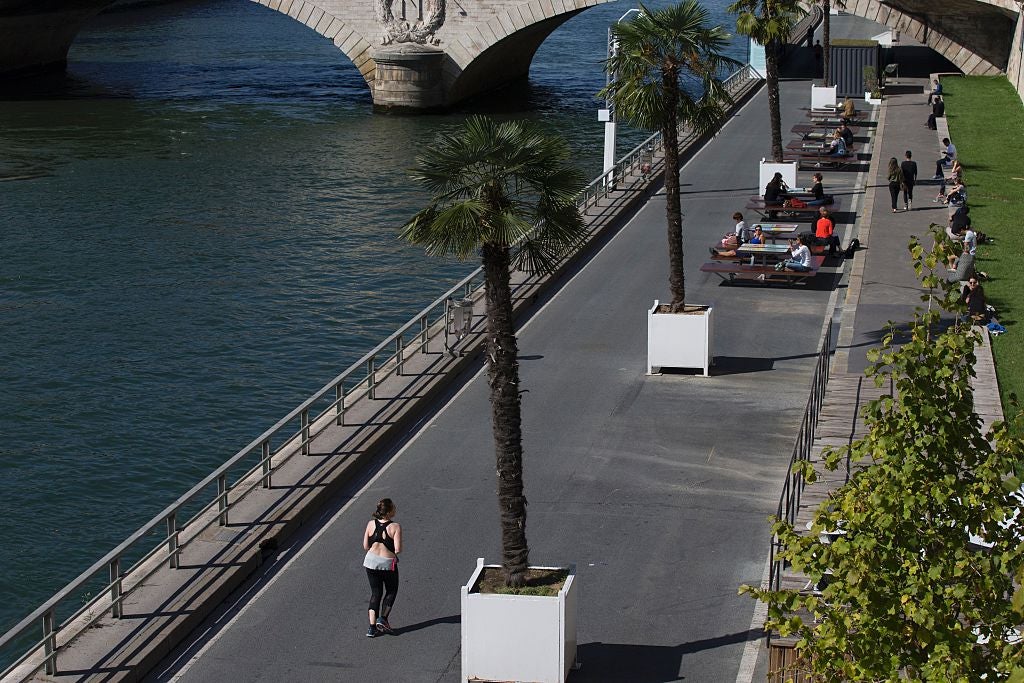 People rest and exercise along the Seine riverside. Paris banned cars from a major thoroughfare to create this pedestrian area. (Photo by Joel Saget/AFP via Getty Images)

Just as the problem is multifaceted, so are the solutions – and many have been deployed successfully in recent years.

The strongest option is to simply ban cars altogether, typically in neighbourhoods or small sections of a city. Traditionally, it’s an arrangement seen in idyllic tourist areas or historic city centres. But beginning in the 1950s and ’60s, with notable early examples in Rotterdam and Copenhagen, progressive leaders have reaped the rewards of turning congested, car-filled thoroughfares into purpose-built pedestrian areas.

This idea has caught on in European metropolises in particular. Since 2015, Paris Mayor Anne Hidalgo has led an ambitious and hotly contested plan to ban cars along the banks of the river Seine, which was previously a major thoroughfare across the city. Oslo has pledged to ban cars in its city centre (though it’s walked that back to “least number of cars possible”). In Madrid in 2019, meanwhile, a newly elected mayor backed down amid massive public outcry after vowing to roll back car-free plans in the city centre. Select members of C40, an international coalition of cities fighting climate change, have pledged to create major car-free zones in their city centres by 2030.

In the US, New York City made waves in 2009 when it banned cars from Times Square after a rise in car crashes. The pedestrian plaza that emerged there became a model for redesigning road and pedestrian space throughout the city, often seeing favourable results from changing just one block at a time.

There’s a gentler approach that can still have profound effects on city life: temporary car-free streets. This approach has the benefit of being more palatable to the general population while also introducing them to the idea of change over time. The most famous example of this is the Ciclovía in Bogotá: Starting in 1974, large stretches of roads have been closed to cars every Sunday. It’s estimated that about a quarter of the city’s residents show up each week for exercise and social activity. Ciclovía’s popularity has inspired broader changes in the city, spurring other street redesigns and the expansion of cycling infrastructure.

It’s worth noting that car bans aren’t always absolute: a common approach is to restrict private cars from traveling on a roadway, while still allowing local traffic, deliveries, emergency vehicles, taxis and transit. In 2019, New York City banned passenger cars from traveling on its busy 14th Street, converting the road into a rapid busway that also allows for delivery vehicles and quick drop-offs by car. San Francisco’s Market Street has similarly become a model of multimodal transportation after banning private cars, though commercial and emergency vehicles are still present and cars can still cross Market Street at intersections.

The beautiful simplicity of the “superblocks”

Perhaps the most compelling case study comes from Barcelona, where the “superblocks” system has transformed neighbourhoods since it was first tested in 2016.

Part of the genius of this plan by Mayor Ada Colau to cut car and moped use by a fifth is that it’s not explicitly anti-car, it’s merely pro-people. The concept links a series of traditional city blocks and turns them into pedestrian-only superblocks, where interior roads become car-free (or severely car-limited) transportation corridors. Each of these areas encourages the creation of new parks, neighbourhood interactions and integration, as well as street-level retail where cars and parking once stood. Studies show the oldest superblock areas have increased walking by 10% and boosted cycling by 30%. The European Investment Bank has now funded superblocks expansion as a Covid economic-recovery initiative.

Just as superblocks divert car traffic, other schemes attempt to control traffic flow by regulating volume within certain areas. Many cities have set up low-emission zones, effectively charging tolls for vehicles that produce more pollution, creating an economic disincentive to drive. The most strict may be the Ultra Low Emission Zone (ULEZ) in London, which charges cars and trucks on a sliding scale to enter a central business zone. Since being set up in 2019, it has significantly slashed pollutants by a third, according to city data. 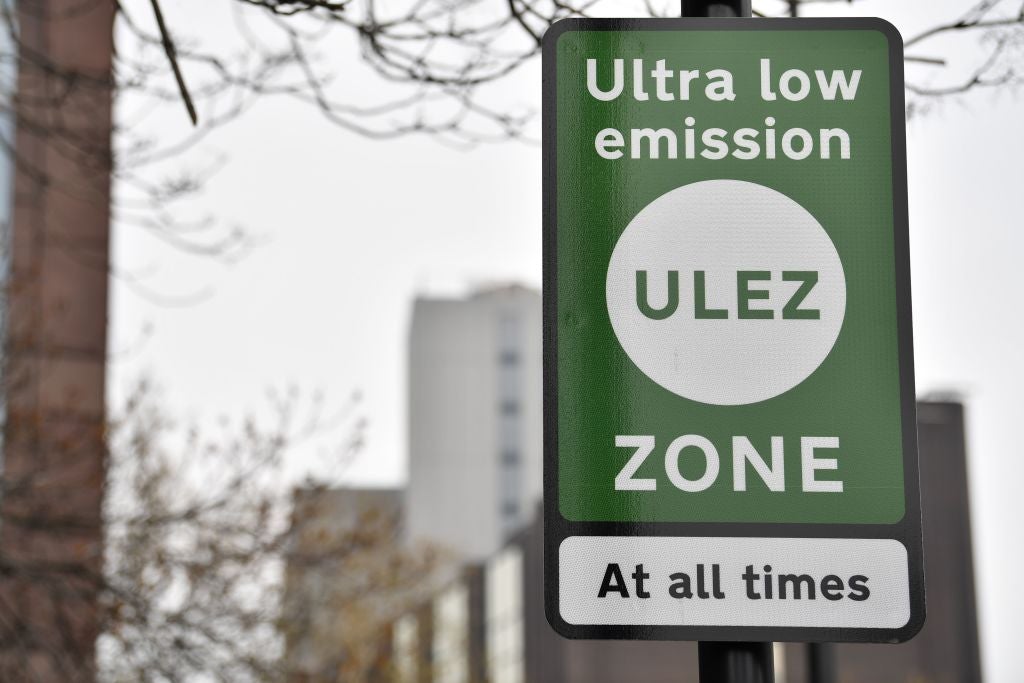 Many other cities have discussed going one step further and setting up emissions-free zones that would ban any car with an internal-combustion engine. Others have decided to modulate the total volume of traffic, following the model of Singapore, whose Electronic Road Pricing System, or ERP, fastidiously monitors car traffic via cameras and electronic sensors, charges tolls during rush hour and funds mass transit projects. This model has been approved but not yet implemented in New York City; advocates hope such a toll for lower Manhattan could cut emissions and raise funds to rescue the moribund subway system.

Opponents often decry these visions of a car-free future as urbanist fantasies that will cause more congestion as well as harm to businesses by cutting off their customers’ access. There’s extensive research that undermines both of those arguments. Walkable streets tend to benefit small businesses, and the principles of induced demand appear to work in reverse: traffic doesn’t get worse, because people find alternative ways to navigate an area that’s unwelcoming to cars.

With increasing urban populations – and growing congestion problems to match – urban streets are crunched for space. If anything, advocates of eliminating cars could be considered the ones who are living in the past: Cities vastly predate the automobile, and if current trends continue to develop, they may outlast it as well.