Modern cities suffer from a parking problem that’s hidden in plain sight: There’s simply too much of it.

When we think of the issues cars present, we tend to look at automobiles in motion. But an often overlooked issue is how cities handle cars at rest. Since the invention of the automobile, parking – or, sometimes, progressive, forward-thinking restrictions on parking – has powerfully shaped the design, environment and economies of urban areas. 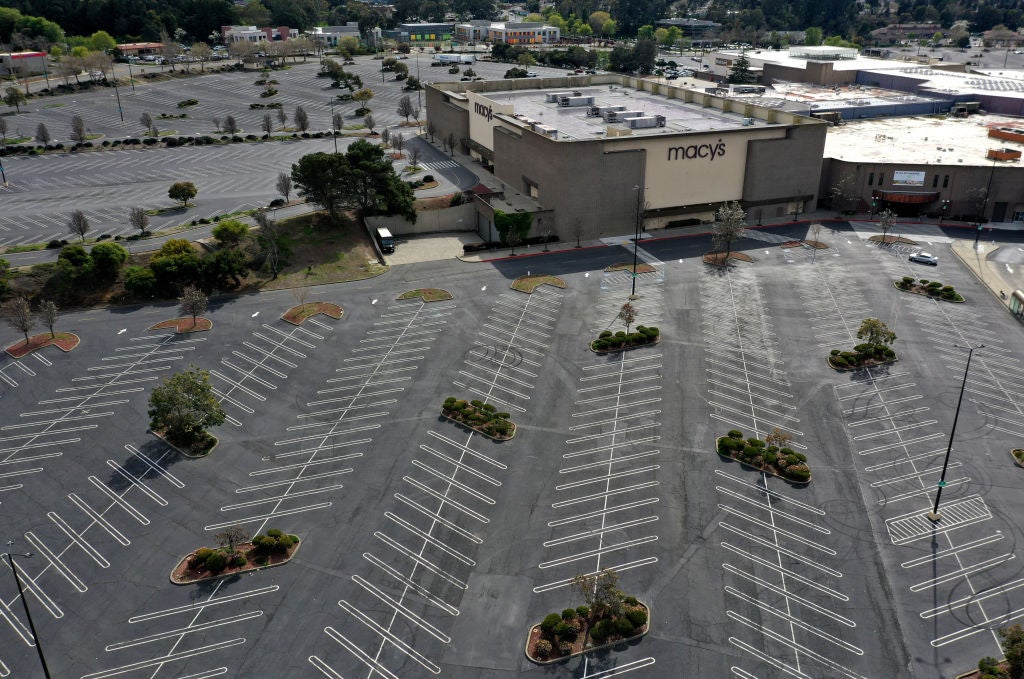 In many places, mandatory parking minimums require real estate developers to include a certain number of parking spaces in anything they build. (Photo by Justin Sullivan/Getty Images)

The sheer amount of asphalt should make it clear how cars at rest consume our cities: some analysts say Western Europe contains 300 million spots, while estimates suggest the United States boasts 2 billion. Often, that real estate is centrally located and very valuable. Just a single standard parking space, which measures a little more than six by three metres, takes up about as much space as a small Parisian studio apartment, a low-income-housing unit in India or three office cubicles.

These spaces line the streets of urban neighbourhoods, stack floor upon floor in parking garages and sprawl out in seas of asphalt around offices and shopping centers. The largest parking lot in the world, at the West Edmonton Mall in Alberta, Canada, boasts 20,000 parking spaces, covering enough space for a neighbourhood of 500 homes.

Even more troubling, though, is that parking spaces aren’t actually used that much. A study by the Center for Neighborhood Technology, a sustainable-development nonprofit in Chicago, found that a quarter to a third of parking spaces around apartment buildings in many US cities sat empty. Considering that the average car moves just 5% of the time, there’s a strong case for cities to rightsize the space they allocate for vehicles at rest.

And while parking is often seen mainly as a problem for the car-centric United States, it’s important to understand that it truly is a global issue. As global living standards rise and urbanisation accelerates, especially in India and China, cities around the world are seeing huge spikes in motor vehicle ownership accompanied by demand for parking. In India, the number of private automobiles grew nearly 400% between 2001 and 2015, going from 55 million to 210 million. In China, as of 2017, there was a shortage of 50 million parking spaces, according to the central government.

Cities face immense challenges from climate change and rising heat, increased urbanisation and housing affordability. All of those are made worse by our addiction to asphalt. 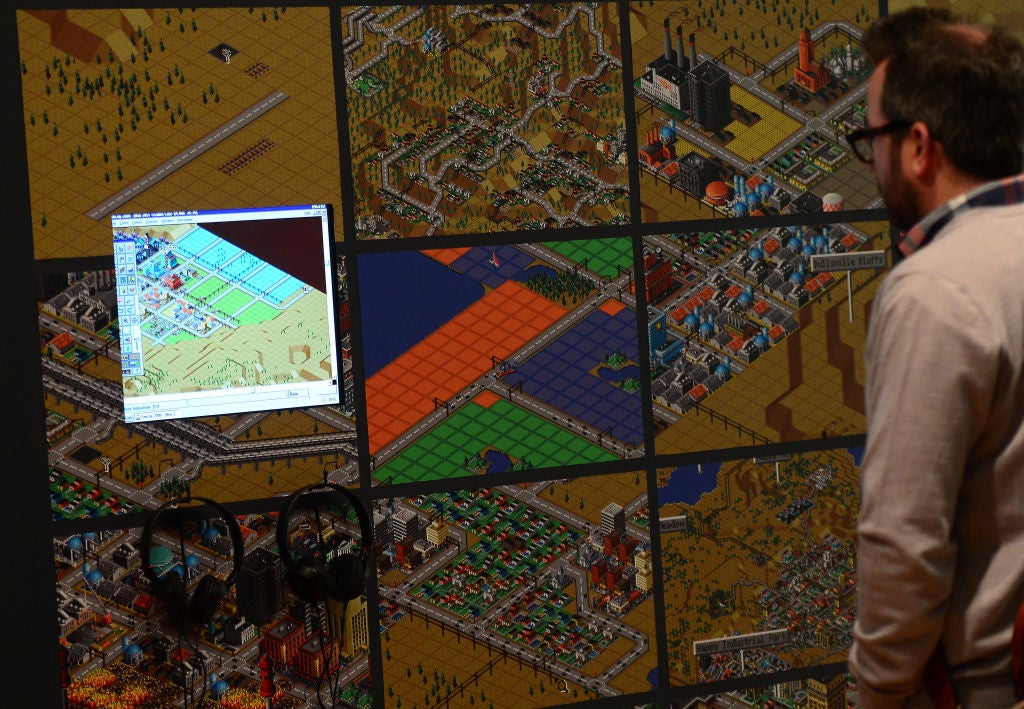 SimCity‘s lead designer once said he wanted to model the game on real cities but “quickly realised there were way too many parking lots in the real world”. (Photo by Emmanuel Dunand/AFP via Getty Images)

The parking problem is a land use problem

Few aspects of zoning, the building code or development exert such a strong influence on the built environment. The deeper you dig into parking policy, the clearer it becomes that parking isn’t something offered to motorists as much as it is mandated by the government – and the more it can seem like a key that unlocks a greater understanding of urban land use.

Many localities have mandatory parking minimums, which require real estate developers to include a certain number of parking spaces in anything they build. The required number of spaces depends on a building’s use and size; in the US, commercial properties like grocery stores typically need to have four to six spots per 1,000 square feet. The rules can get ridiculous: St. Paul, Minnesota, for example, mandated four spaces for every hole on a golf course and one space for every three nuns in a convent. In countries such as Australia, China, India and the Philippines, every project requires new parking.

Mandatory parking minimums have ripple effects that extend well beyond individual developments. That’s in no small part because parking incentivises driving. A Norwegian study found that parking availability triples the likelihood of owning a car. It also creates congestion and reduces the real estate available for more important purposes, such as housing, transit, parks and public space. Parking also contributes to urban sprawl by increasing the distance between each building. At scale, this makes neighbourhoods and cities less walkable, increasing the need to use cars to move around, which, of course, spurs the need for more parking.

Traditionally, when people mention the problem with parking, they’re referring to a lack of space for cars in a particular place. In reality, the parking problem is an issue of overall transport policy. Failures in parking management lead to a greater dependence on the private automobile and more competition for available parking space.

An illustrative anecdote comes from Stone Librande, the lead designer of the hit video game SimCity. “We were originally just going to model real cities, but we quickly realised there were way too many parking lots in the real world and that our game was going to be really boring if it was proportional in terms of parking lots,” he told the Atlantic in 2013.

Parking isn’t as expensive as it should be

Anyone who pays for it is sure to have the same thought at some point: why is parking so expensive? But consider what that six-by-three-metre space costs in some of the priciest urban areas of the world. In London, some neighbourhoods have what’s called residents’ parking zones, where locals pay between £90 and £242 a year for the right to park in areas that typically charge substantial hourly rates up to £5.20. In wealthy neighbourhoods such as Kensington and Chelsea, it’s ostensibly a giveaway to the upper crust.

This amounts to a subsidy for motorists that’s paid for by non-drivers. The European Parking Association found that the subsidies for on-street parking across Europe added up to roughly €300 per taxpayer per year. In countries like India, where most people walk or take transit, parking requires public expenditure benefitting a very well-off sliver of the total population.

And even where parking is abundant and free, it comes at a cost.

The perceived need for parking adds many expenses to homes and businesses. A small part of the price of every item in a store reflects the cost of providing parking, and business owners often fastidiously defend parking and street space for cars as necessities for business (often at the expense of adding or improving bike and pedestrian infrastructure).

This affects every business, but it’s particularly hard on smaller ones; the added cost of carving out space for cars means larger, well-financed chains have an advantage. It can even shape what kinds of businesses take hold. When bars are required to have a minimum number of parking spaces (yes, this happens) it’s more challenging to have a small, walkable neighbourhood pub.

And just like parking at apartment buildings, these spaces often remain unused due to overzealous requirements – a US social media campaign even highlights the empty spaces near retail on Black Friday, traditionally the busiest shopping day of the year. Donald Shoup, a professor and patron saint of the anti-parking crusade, studied the cost of parking spaces built on the campus of the school where he teaches, UCLA. He determined that they accounted for 39% of the total cost of constructing a new office building.

In many ways, it’s worse for residential projects. Research on parking minimums in the United States shows they add significant cost to projects. Adding one parking space per unit increases the cost of affordable-housing development by 12.5%, and UCLA researchers found that garage parking typically adds $142 a month to a household’s rent. The inverse occurs when parking minimums get cut. In 2015, Minneapolis slashed parking minimums for housing. Developers responded by dropping rent costs for new apartments, with $1,200 units becoming $1,000 units.

This requirement becomes more striking with taller building projects, which might be forced to include pricey subterranean car storage or dedicate several lower floors to parking that could otherwise be used for street-level retail, offices or homes. Enough new towers in a recent wave of development in downtown Los Angeles featured parking podiums that a magazine had the material to do a best- and worst-designed list.

How to fix the parking problem

The insatiable hunger for more parking comes from the belief that parking is a right, not a land use that’s subject to market forces. So it’s no shock that reformers who want better ways to manage the parking problem – and to eliminate the glut of spaces – look to the power of the market.

The researcher Paul Barter identifies three ways for cities to manage parking. There’s the supply-focused approach, on display in the US, which relies on parking minimums. There’s parking management, which contains a mix of restrictions and rules to balance competing land use goals. And there are market-based strategies that blend supply deregulation and efficient pricing: Tokyo, for instance, requires car buyers to prove they own a spot before buying a car. (This, along with having no explicit parking requirements for builders, has kept Tokyo’s parking supply bounded and small).

Parking management is by far the most common way to rein in parking chaos. In Mexico City, a study of the city’s parking inventory, “Less Parking, More City,” found that parking spaces accounted for 40% of everything being built in the city. That meant parking covered even more area than housing. Between 2009 and 2013, 250,000 parking spaces were built, researchers found, costing about $10,000 per space.

That money could have funded 18 lines of bus rapid transit, a system capable of moving 3 million people a day. The city responded by turning parking minimums into parking maximums, making sure new projects didn’t add to the excess supply. São Paulo, Brazil, has adopted similar ideas, and a campaign to do the same in Auckland, New Zealand, (“Bin the Parking Mins”) also repealed the old standard.

Some cities have turned to technology to tame parking problems. In 2011, San Francisco set up a pilot to test dynamic pricing for parking spaces, meaning the cost of parking changes based on demand. Market forces work: research demonstrated that the trial increased parking availability, lowered the time spent searching for a spot and even sped up transit routes. Increasing the price of parking by 10% cut demand between 3% and 10%. Some researchers are also pushing an idea called walkable parking, which reorients development around shared park-and-walk areas between scores of big developments, concentrating parking in certain areas, eliminating excess capacity and, ultimately, creating denser (and more walkable) neighbourhoods.

All this change has added up to predictions of much less parking in the future. The commercial-real-estate advisory firm Green Street Advisors analysed the current transportation revolution, consisting of ride-hailing, driverless cars and a move toward less private ownership and more walkability, and found that parking needs may decline by 50% or more in the next 30 years. If this dovetails with other recent trends – youth getting driver’s licenses later, increased urbanisation and the emergence of micromobility and other transit options – more and more parking space may be converted to better, higher uses beyond simply waiting for the next driver.