In the face of an intensifying housing shortage in many cities, the notion of housing as a human right has gained greater currency. While there are a variety of examples of government interventions to provide living spaces – from council housing in the postwar UK to Singapore’s public ownership model – for those on the left, the example of “Red Vienna” looms large.

Red Vienna is the name given to the 16-year period after the World War One when the Austrian Social Democratic Workers’ Party undertook one of the most ambitious public housing programmes ever. Still today, 60% of residents live in co-ops, government-owned or -subsidised housing built around the nucleus of the 1920s system. 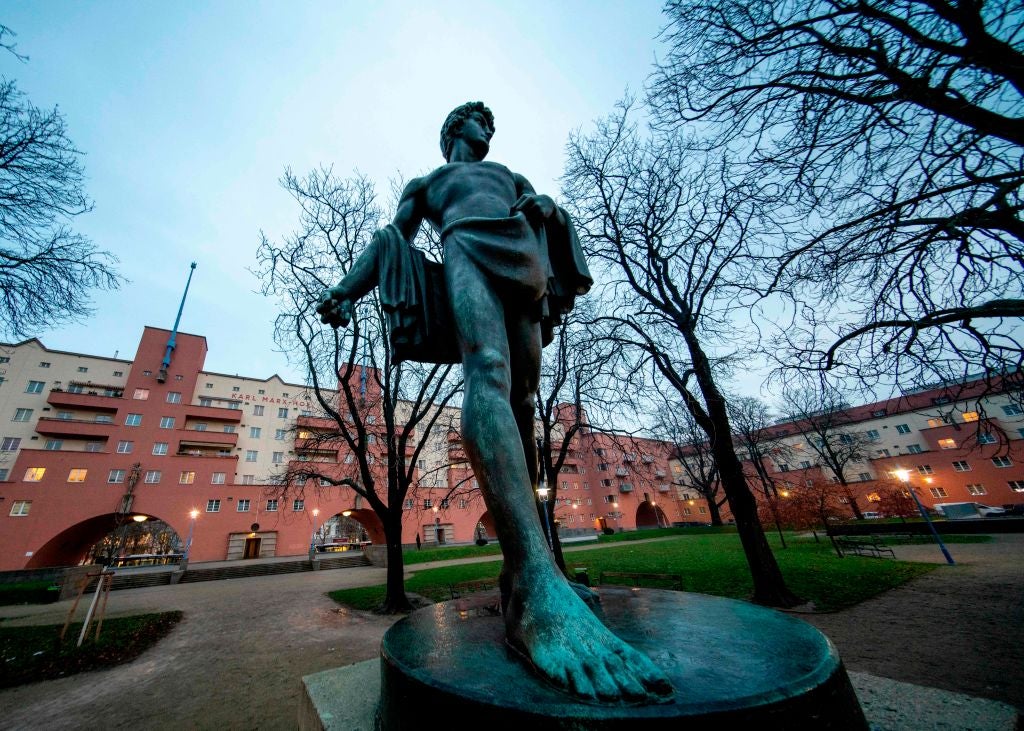 Though the transformation took place a century ago – from 1918 to 1934, before the development of the postwar welfare state and in an even greater era of economic and political turmoil – the city’s legacy of affordability still gets attention from prominent publications in the US and UK, and devoted interest from the left-wing press.

“There’s a political interest in searching for alternative ways of dealing with the housing market, which has to do with the re-emergence of the housing question in so many cities,” says Justin Kadi, assistant professor of spatial planning at the Vienna University of Technology. “For that reason, Vienna is one of the key examples. Every year, I have people from Germany or the UK asking me about how the system worked and how it still influences the housing market today.”

Even as the Social Democratic Party has moderated, it has largely maintained a devotion to defending public-sector interventions in the city’s housing market and preserved its policy traditions. Vienna remains one of the cheapest big cities for renters in Europe, an example that many left-of-centre policymakers hope to emulate in other places.

Red Vienna was a local movement, not a national one

After the First World War, Vienna was a humbled city. No longer the imperial capital of one of the longest dynasties in human history, it was reduced to being the only large city in a newly tiny country of 6.5 million residents. It was ruled by the left-wing Social Democratic Workers’ Party, which easily won commanding majorities in local elections even as it was shut out of power at the national level. But because Vienna was considered both a province and a city, it had control over its own taxing powers, allowing the party to enact an ambitious agenda.

“During that period, the country was very right wing and Vienna was very left wing,” says Eve Blau, co-director of the Harvard Mellon Urban Initiative. “The city was also a province, which means it’s a city and a state, like Washington, DC, except with power.”

Housing topped the party’s agenda. At the end of the war, three-quarters of apartments in Vienna were overcrowded. Many were rent-by-the-room accommodations, in some cases with residents who would take the bed for half the day, essentially sleeping in shifts. Toilet and water facilities were not in-unit and instead tended to be shared among tenants. Many rooms did not have windows, so both airflow and sunlight were relatively scarce commodities. Rents were very high despite these conditions.

To address these problems, the Social Democrats put in place an aggressive regime of taxation to pay for a series of massive public housing complexes in almost every neighbourhood in the city. They decided that taking on debt would be wasteful, so the spending would be entirely financed by taxes. Levies were instituted on what were seen as luxury goods and services: cars, horses, dogs, servants. Privately owned homes, also a provenance of the privileged, were taxed as well. 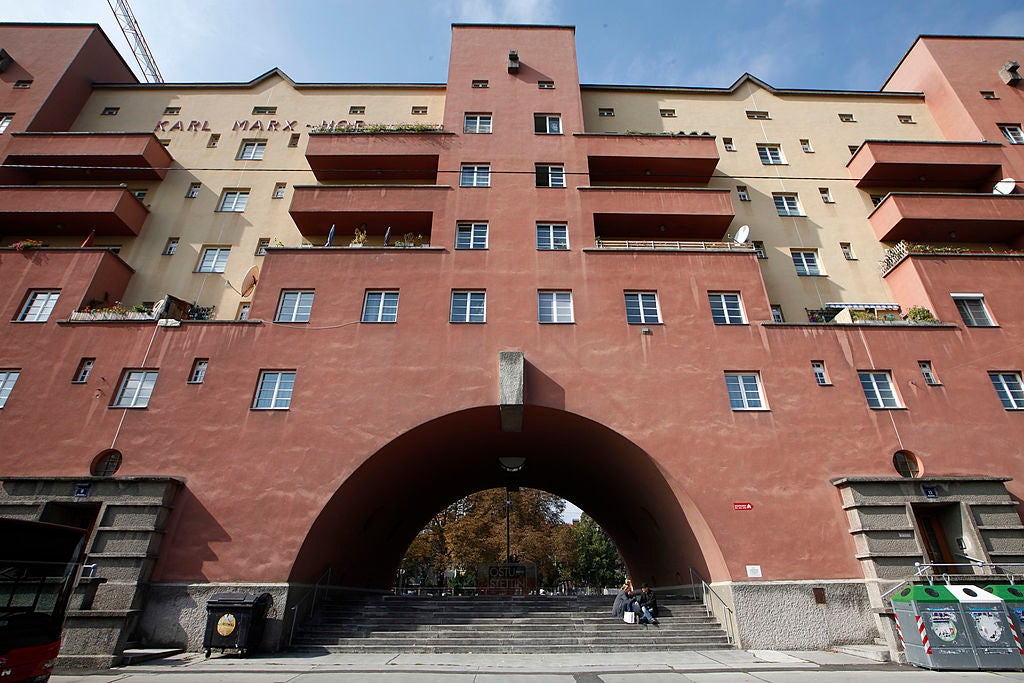 These policies were controversial and possible only because of the size of the majorities the Social Democrats won in local elections. For those facing progressive taxation, the fiscal basis for Red Vienna – a term first used during the 1920s in anti-socialist propaganda – was seen as thinly veiled communist tyranny. Its enemies in the right-wing press decried the city government’s “tax and finance terrorism”.

The macroeconomic turmoil of the late 1910s and early 1920s added fuel to conservative resentment, but it also presented an opportunity. The revenue raised from city taxes went further because the city government was able to buy out property owners buffeted by hyperinflation and economic crisis. This gave the public housing programme access to land all over the city that otherwise would have been prohibitively expensive (if it were for sale at all). The massive economic dislocations of the postwar years gave the Social Democrats’ housing plan an edge. By 1924, the municipal government was the biggest property owner in Vienna.

“The Social Democrats took advantage of a crisis,” says Janek Wasserman, associate professor of history at the University of Alabama. “They used that hyperinflationary moment to basically expropriate land and property from people going under – the people who owned a lot of the real estate stock in the city.”

Red Vienna’s most prominent buildings were designed as “superblocks”, but unlike their contemporaneous counterparts in Germany or the much maligned public housing model in the postwar US, they were constructed to flow into the larger city. They were built with arching entries connecting the interior of the apartment projects, usually large courtyards studded with communal uses, with the surrounding neighbourhoods. 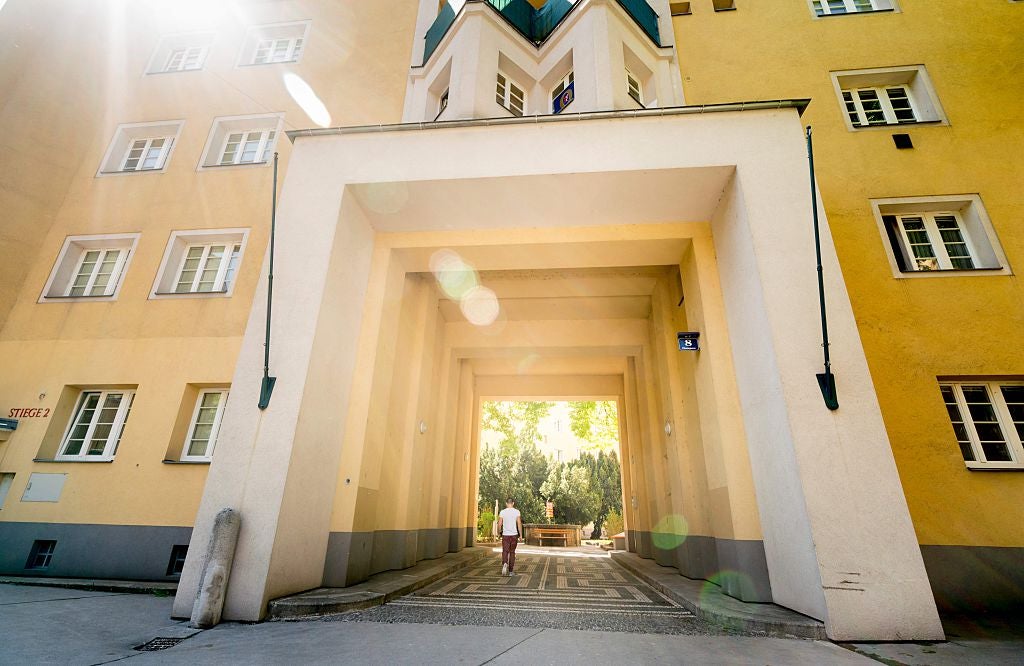 A large entryway connects a courtyard to the city in a Vienna housing block. (Photo by Joe Klamar/AFP via Getty Images)

The buildings were designed by an array of architects, with some reflecting contemporary trends but others echoing surrounding buildings and using more traditional pre-war styles. (This caused controversy among Modernist architects and Communist intellectuals, who saw the buildings as too bourgeois.) Some buildings were named after the socialist heroes of the time, including Karl Marx and George Washington, examples that highlight both the Marxist and democratic ideology of the Austrian socialists.

The archetypal apartment unit built in this time was small by modern standards, with one bedroom, a kitchen and a bathroom with running water and a toilet – features that had previously been shared among numerous dwellings. Windows were a common feature, which was a huge improvement over previous working-class domiciles.

“You can change society by changing the city.”

The Viennese public living spaces were intended to serve as more than shelter. In recent years, there has been a greater emphasis among affordable-housing developers and public policymakers on building neighbourhoods, not just dwellings. This was also the model of the municipal housing built by the socialists. Commercial storefronts were installed on the street level, while the interior courtyards included machine laundries, day care centres, municipal libraries and medical clinics. In addition to public services and small businesses, the government ensured space for cultural amenities like theatres.

“These buildings distributed housing throughout Vienna, but they also were the means of distributing a whole enormous system of social infrastructure,” says Blau, who wrote a book called The Architecture of Red Vienna. “They were reallocating the city to people who hadn’t had access to it. You can change society by changing the city.”

There was a paternalistic side to Red Vienna, too. The government sought to limit family size as well as overpopulation and crowding by propagating birth control and sex consultation services. The latter tried to promote sex as only a means of procreation, and the city government’s social services office was both culturally conservative and intrusive. Residents who received municipal services were the subject of routine home visits, where norms of hygiene and morality were enforced.

Despite these obstructive policies, which received pushback from the party’s youth wing, the Social Democratic government remained widely popular. Between 1924 and 1934, the city government built around 400 housing blocks with 64,000 units. Every district of the city had at least one new public housing complex, and an eighth of the population lived there. Rents were capped at 3.5% of wages, which was intended to cover merely maintenance costs. 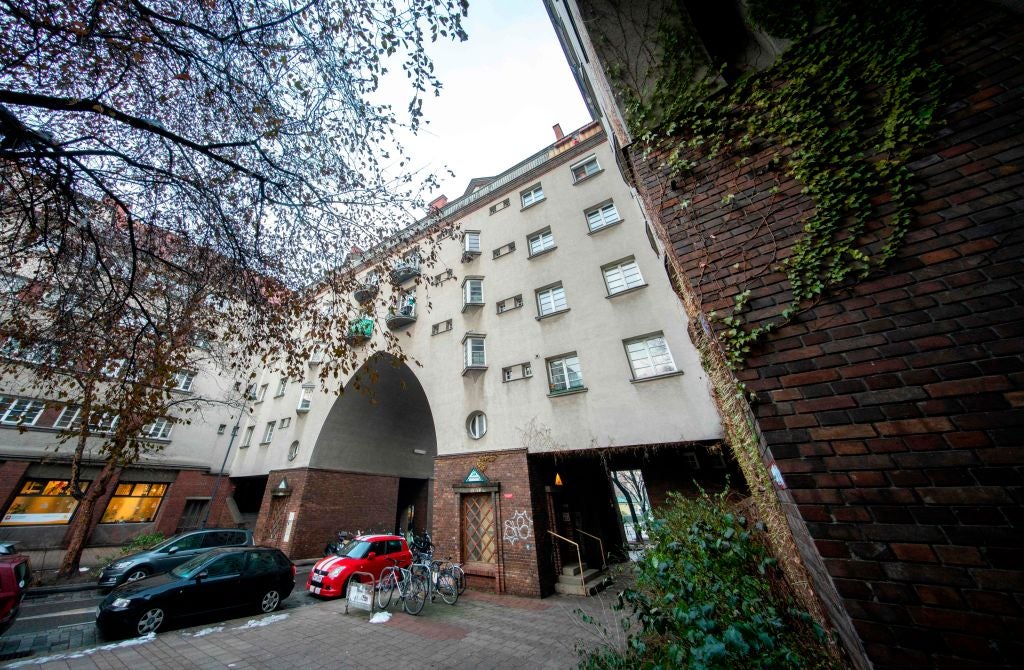 But the island of socialism in Vienna was surrounded by a sea of reactionary political tendencies. In 1933, the chancellor of Austria suspended the country’s parliament, and the following year the newly authoritarian national government besieged Vienna. Although the public housing complexes had been built with some idea that they could be converted into fortresses, that idea did not work in practice. The Social Democratic government surrendered after two days of bombardment. Four years later, Austria was annexed into Nazi Germany.

War and fascism weren’t the end of Red Vienna. After the Second World War, the reconstituted Austrian Republic used the socialist municipal government’s policies as a model for the new national welfare state. In the city itself, the Social Democratic Party won power again in 1945 and has prevailed in almost every election in Vienna since.

That’s partly why the public housing legacy was not only preserved but improved upon. For decades after the World War Two, additional housing complexes were built throughout the city, and this time beyond its 1930s borders as the central city’s political boundaries moved outwards. Today, 60% of Vienna’s residents live in homes that are either owned by the city government or by state-subsidised non-profit cooperatives. Admittance is not restricted to the poorest, which is to ensure a diversity of demographics can live together in these buildings so the poor, working class and middle class are integrated among one another. Beyond these public-backed units, rent regulations guarantee that private market prices aren’t astronomically higher.

While Vienna’s public housing infrastructure wasn’t demolished or weakened in the late 20th century as happened in many other Western nations, many of the political trends of recent years affect Austria as well. The far-right Freedom Party is gaining more adherents among the Social Democrats’ working-class base, while the party itself is much more moderate than its predecessors. The few new housing complexes that are being built today are much smaller in scale, although they continue to be well integrated with their urban surroundings and connected to transit.

Historians familiar with Red Vienna’s history say the political context that allowed this aggressive public housing program would be hard to replicate today. The municipal government’s control over its own tax policy would be alien to most US cities, while Austrian elites of the day had few other choices of locale. No other city in the country could compare to the capital in size, culture or economy, no matter how left-wing its government. The Social Democrats were also able to take advantage of the seismic economic shifts of the day to buy land from formerly wealthy residents at low prices.

“In the United States and in much of Europe as well, cities are often fairly left-leaning, but it’s a question of having the revenue for any of these large infrastructure projects,” says Wasserman, author of Black Vienna: The Radical Right in the Red City. “And that’s just not there.”

For Blau, the main takeaway from Red Vienna is not so much the financing of the public housing but how it was designed. In many ways, the socialist government’s planning and architecture mirrored many of the best practices of today. Its housing projects were built as an extension of the city, meant to meld with and into the surroundings rather than stand apart. Pedestrian and transit access was emphasised because the socialists’ constituents did not own cars. Residential, social and commercial uses were laced together, not separated as they often are in US zoning laws. None of it was inaccessible, none of it was isolated. Subsidised housing could be, and should be, in pride of place next to its luxury counterparts.

Topics in this article: Construction, History