Over the past several months, Austria has recorded its highest unemployment rate since World War II, thanks to the economic aftermath of the Covid-19 pandemic. With no job or a suddenly smaller income – not to mention the continued threat of the virus – many Viennese will opt for a staycation this summer. 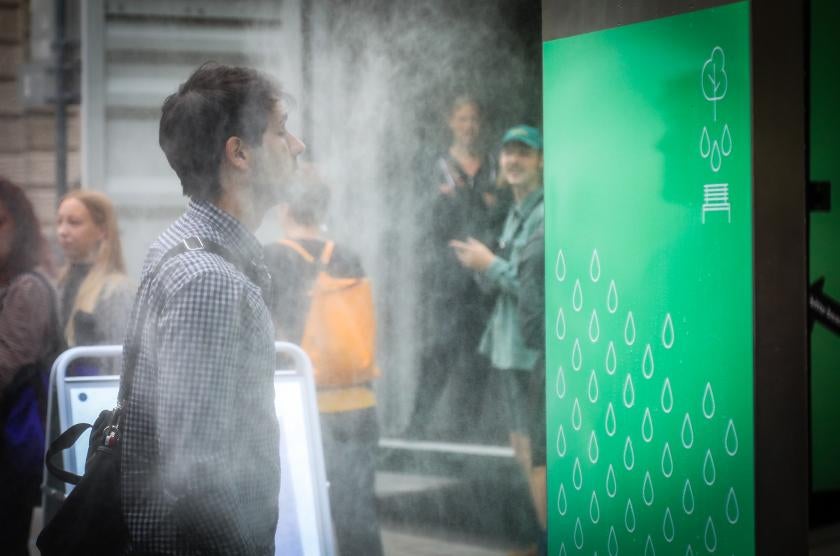 A Vienna resident cools off at one of the city’s new Cool Streets installations. (Photo courtesy of Christian Fürthner/Mobilitätsagentur Wien)

Meanwhile, last year, Austria’s capital experienced 39 days with temperatures of over 30°C (86°F), one of its hottest summers in history, according to the Central Institute for Meteorology and Geodynamics.

Climate experts expect a similarly sizzling 2020 season, and city officials are now doubling down on efforts to combat the heat by launching a “Cool Streets” initiative as well as a new, state-of-the-art cooling park.

“As the city councilwoman in charge of climate, it is my job to ensure local cooling,” Vienna’s deputy mayor, Birgit Hebein, proclaimed at the opening of one of 22 new Cool Streets on 22 June.

“In Austria, there are already more heat deaths than traffic fatalities.”

Hebein was referring to the 766 people the Austrian Agency for Health and Food Security included in its 2018 heat-associated-mortality statistics. The number was up by 31%, compared with 2017, and in contrast to the 409 people who died in traffic collisions the same year.

The project includes 18 temporary Cool Streets located across the city, plus four roads that will be redesigned permanently and designated as “Cool Streets Plus”.

“The Plus version includes the planting of trees. Brighter surfaces, which reflect less heat, replace asphalt in addition to the installation of shadow or water elements,” said Kathrin Ivancsits, spokeswoman for the city-owned bureau Mobilitätsagentur, which is coordinating the project.

A sensor in the granite base releases drinking water and pushes it through 34 nozzles whenever the outside temperature reaches 25°C. As soon as the ambient temperature drops to 23°C, the sensor, which operates from 10am to 8pm, turns off the water supply.

The sensors were included in part to allay concerns about legionella, a pathogenic bacterium that can reproduce in water.

“When the spray stops, the system drains, and therefore no microbial contamination can develop,” Dr. Hans-Peter Hutter, deputy head of the Department of Environmental Health at the Center for Public Health at Medical University Vienna, said in a televised interview.

Hutter also assured the public that there is no increased risk of a Covid-19 infection from the spray as long as people adhere to the 1m social-distance requirement.

But Samer Bagaeen of the University of Kent’s School of Architecture and Planning notes that air cooling systems, like the ones used in Germany at abattoirs, have been found recently to be a risk factor for Covid-19 outbreaks.

“The same could be said for spray devices,” he warned.

Vienna’s district councils selected the 22 Cool Street locations with the help of the city’s Urban Heat Vulnerability Index. The map shows where most people suffer from heat by evaluating temperature data, green and water-related infrastructure, and demographic data.

“Urban heat islands can occur when cities replace the natural land cover with dense concentrations of pavement, buildings and other surfaces that absorb and retain heat,” as the US Environmental Protection Agency states. 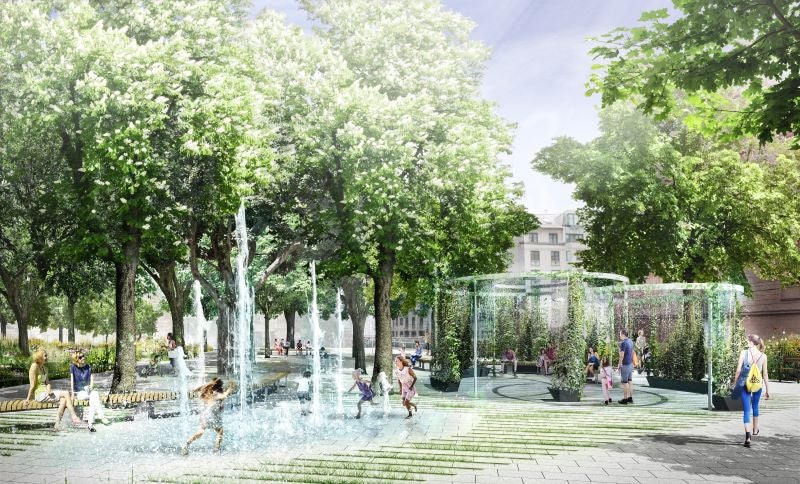 A rendering of Vienna’s planned park featuring a Coolspot, which is scheduled to open in August. (Photo courtesy of Carla Lo Landscape Architecture)

Vienna’s sixth district, Mariahilf, is such an area. The construction of the capital’s first “Cooling Park”, a €1m ($1.2m) project covering the 10,600-square-metre Esterházypark, is designed to provide relief.

The effects of evaporation and evapotranspiration create a cooler microclimate around the 30m-square seating area, alongside other spray spots selectively scattered across the park.

The high-pressure spray also deposits tiny droplets on plant and tree leaves, which stimulates them to sweat even more. These collective measures help to cool their surroundings by up to six degrees.

The landscape architect Carla Lo and her team planned what she calls the “low-tech” park components. “Plants are an essential design element of the Cooling Park,” Lo says. “By unsealing the [soil], we can add new grass, herbaceous beds and more climate-resistant trees to the existing cultivation.”

Living near the park and yearning for an urban escape close by, Lo says she’s motivated to ensure the park is completed by mid-August.

“If we don’t do anything, Vienna will be another eight degrees Celsius hotter in 2050 than it already is,” Hebein said.

Vienna recently came in first in the World’s 10 Greenest Cities Index by the consulting agency Resonance.

“There is no one size fits all on how cities respond to urban heat,” says the University of Kent’s Bagaeen, who points out that Vienna was one of the first European cities to set up an Urban Heat Islands Strategic Plan in 2015.

In the short term, prognoses on the city’s development may be more difficult: Vienna votes this autumn.

Petra Loho is a journalist and photographer based in Austria.