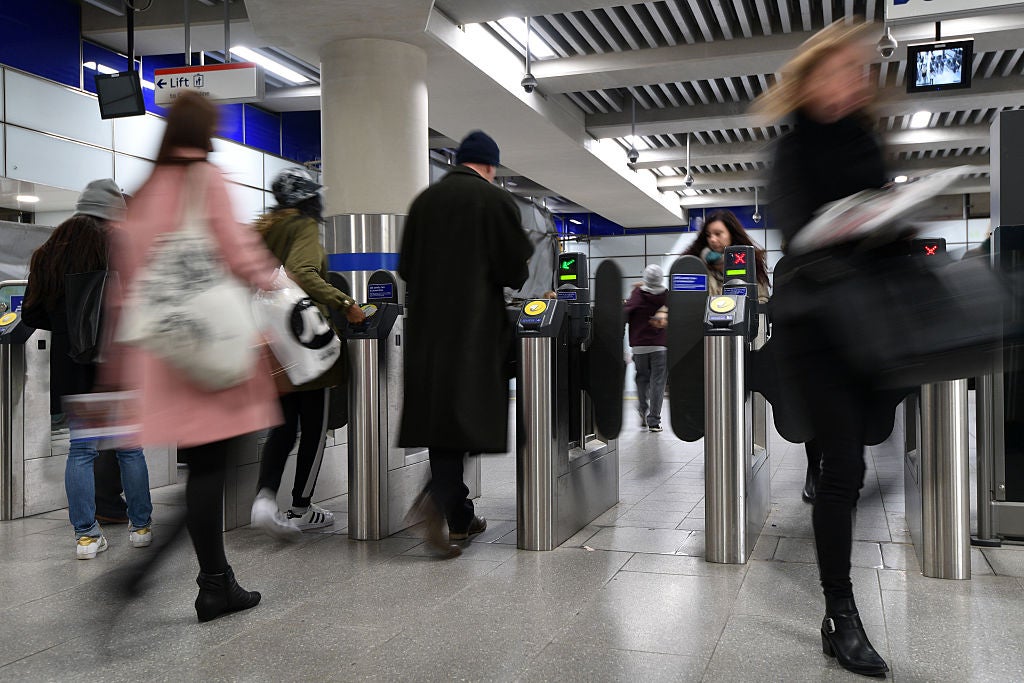 Transport for London owns a fair amount of land, but it doesn’t leverage it for income the same way Hong Kong does. (Photo by Carl Court/Getty Images)

The Covid-19 pandemic has triggered a public transportation funding crisis around the world on a scale not seen in recent memory. Precipitous drops in passenger numbers – up to 90% in some cities – have decimated revenues. Among the worst-hit have been big-city systems that depend heavily on fares, with social distancing making high ridership levels impossible.

To keep transportation agencies afloat, national and local governments have approved emergency bailouts for operators. The UK government has so far provided Transport for London with £2.8bn ($3.8bn) in emergency money, while US transit agencies have collectively received almost $40bn in two federal bailouts.

As City Monitor reported this month, many experts remain optimistic about the long-term future of transit. Still, transport advocates say now is the right time to rethink the way we fund public mobility to ensure its sustainability.

“Instead of these bailouts, permanent reform of public transportation funding is needed to reduce reliance on fare revenue and guarantee central-government contributions to support a decent level of service,” says Jenny McArthur, a researcher and lecturer on urban infrastructure and public policy at University College London.

“The funding models for these systems were developed during stretches of time where there was no major pandemic affecting them and they were reliant on travel demand being relatively stable and probably increasing over time,” she adds.

There are many ways to fund transit – from East Asian systems that invest in property to turn large profits, to US networks where fares barely cover half the running costs, to the 100% government-subsidised networks of some smaller European cities.

Apart from a handful of East Asian systems, one factor most public transport systems have in common is that they are not self-sustaining. This makes them vulnerable to service cuts during crises.

Eric Goldwyn, a researcher at New York University’s Marron Institute, says that while there is “no magic formula to pandemic-proof transit funding”, public transport could be better placed to respond to shocks.

One way to address such uncertainty, according to McArthur, is through contingency funding.

“What could be really effective is having a mechanism to trigger extra support and make sure that funding is topped up for a temporary period if there is some external shock or event which causes your trip travel demand to fall below a certain percentage of the normal,” she says.

Stephen Perkins, who heads research and policy analysis at the OECD’s International Transport Forum, argues that the damage done by the pandemic to agency finances does not necessarily mean that funding models were broken.

“With the best will in the world, I don’t think we could have made any kind of provision in terms of reserve funding to cope with a crisis like this,” he says. “It’s just totally off the scale. It’s not like anything we’ve had to face. It’s a black swan.”

Even though Covid exposed the fragility of transport in most cities, the type and extent of changes those places need to make depends on what was wrong in the first place, Perkins says.

“What you should do to reform always depends on what your starting point is and whether there’s things that weren’t working well or whether it was stable under what could be termed normal, predictable conditions that you could make some kind of provision for dealing with in terms of resilience,” he says.

While there’s no one-size-fits-all funding model, there are certain qualities that an effective transportation funding mechanism should have, says McArthur.

Another important element is diversification, says Perkins – although the exact mix will depend on local conditions.

“The bottom line is having a mix of funding from general taxpayer revenues, fare box and some specific tax revenues,” he says. “That’s a solid basis.”

One city that has put in place a successful diversified model to solve funding questions is Hong Kong. The city’s semi-public Mass Transit Railway (MTR) Corp’s “rail plus property” approach is often held up as the shining star of how to run a commercially successful network.

The corporation acts as a transit operator, real estate developer and multinational transportation company in one. In addition to an impressive fare box recovery ratio of over 100%, MTR builds housing and shopping centres around stations using increases in land value along public transport corridors to subsidise such transit.

It’s a win-win for MTR: “capturing” the value of this real estate helps MTR keep fares low, while building homes near stations makes public transport an attractive option for residents who are willing to use it more often.

This diversified revenue stream is a key reason why MTR managed to turn a profit (albeit small by its standards) even during the 2003 SARS outbreak and the 2019 protests, both of which depressed ridership. Although MTR could not escape losses in 2020, unlike most operators around the world it partly offset them with profits from its other businesses.

Hong Kong’s model might seem to be the solution for ailing agencies looking to crisis-proof their income streams. Experts caution, however, that it’s not simply a case of mimicking the city-state’s funding model.

For one thing, unlike more sprawling cities, Hong Kong’s density makes driving a less appealing option, which inevitably increases dependence on mass transit. At 75 cars per 1,000 residents, Hong Kong’s car ownership rate is far below that of London (348) or New York (223).

Crucially, the Hong Kong government makes the system possible by agreeing to sell land to MTR at the greenfield price.

Although MTR is not the only transit agency that owns land, its model goes much further than that of other entities. Transport for London is one of the UK capital’s largest landowners, but much of that land forms part of the operational transport network.

“The big difference with Hong Kong is that they closely connect their transportation planning and land use, particularly housing development, so it’s the same public agency that does both,” says McArthur.

“London has made some moves to try and encourage more of it, and it’s really good from a planning perspective because you want intensification around stations. But where London really differs from Hong Kong is their ability to completely control and, critically, to actually capture the value created by that development.”

A plan to maximise revenues along the lines of Hong Kong’s model was proposed but abandoned in London. Property developers can, however, make joint investments to pay for public transit improvements near sites they would like to develop. Perkins describes this as “an incremental way of introducing land value capture”.

While value capture can work well, it is not a silver bullet. Systems such as Hong Kong’s risk skewing transit towards more appealing locations, cautions Goldwyn.

“[Value capture] is interesting, but what ends up happening is that it only solves a problem in desirable locations,” he says. “If you’re trying to run a broader system, it might not be enough of a solution.”

Instead, despite the hit it takes in times of crisis, Goldwyn argues that the fare box is still the most viable way to fund transit. This is particularly true in the US, where decisions to plug shortfalls using local, state or federal funds are subject to partisan debate.

“As a transit system, you want to be having a higher fare box recovery than American systems have,” he says.

Perkins agrees that fare box revenues help cities escape some of the political uncertainty that comes with heavy reliance on subsidies.

“London, the archetypal case in the UK, was very well regarded because it had a pretty high fare box contribution to its overall funding,” he says. “Cities that have much lower fare box revenues are more exposed to changes in the general taxation environment, particularly where they depend on national government funding settlements, which can vary so much from year to year.”

It’s easy to say US public transport agencies need to rely more on the fare box. It’s harder to say how this can be achieved.

“You can charge higher fares, but that might depress ridership,” says Goldwyn. “The other thing is to get more riders, which is what we need to focus on.”

The key to getting more riders, he says, is making public transport a more desirable option.

“The issue is not one of, do we need to do this tax or that tax or congestion pricing?” says Goldwyn. “We need to make transit desirable. For the bus, that means you’re running more frequently and you give it its own right of way so it’s not stuck in traffic. For metros and subways, you run it more frequently and you extend it to places where people are moving, where jobs are going and where shopping is happening.

“All of these things are pretty self-evident. You don’t actually need to be very smart to know how to make transport better. Other places have figured it out – import those techniques.”

While service cuts might seem the obvious way for agencies to deal with the pandemic’s decimation of revenues in the present, in the long-run this is damaging, argues Goldwyn. Instead, a crisis is actually the best time to be forward-thinking and invest, he argues.

“Right now in the States, we have low interest rates and people are looking for work like construction,” he says. “This is a great time to go out and do some stuff.

While it might be politically difficult to justify the cost of upgrades, maintaining services and keeping fares affordable at a time when revenues are sinking, McArthur agrees that not investing now will hurt agencies.

“That’s a recipe for reducing your public transport ridership, because those are all the things that are going to turn people off, and I think it’s that logic that I worry is being missed,” she says. “That just puts you on a path to lower and lower ridership. But the further reductions in ridership that you have precipitated through these particular policy actions will further undermine your financial situation. It’s a downward spiral.”

Adapting public transport to better cope with pandemics is another avenue that Perkins thinks governments should be exploring.

“If we think that we’re going to go back to similar patterns of demand, then we should be looking to enhance our public transport in ways that make it better suited for dealing with pandemic-type circumstances,” he says. “That means less crowding, the ability to do some kind of social distancing or responsible behaviour and definitely avoiding dangerous overcrowding. But no city in the world was really making investments to greatly reduce crowding. And that’s one thing that we should probably be looking at.”

Topics in this article : Mass transit

Aisha Majid is a data reporter at New Statesman Media Group, where she splits her time between City Monitor and Press Gazette.
Websites in our network