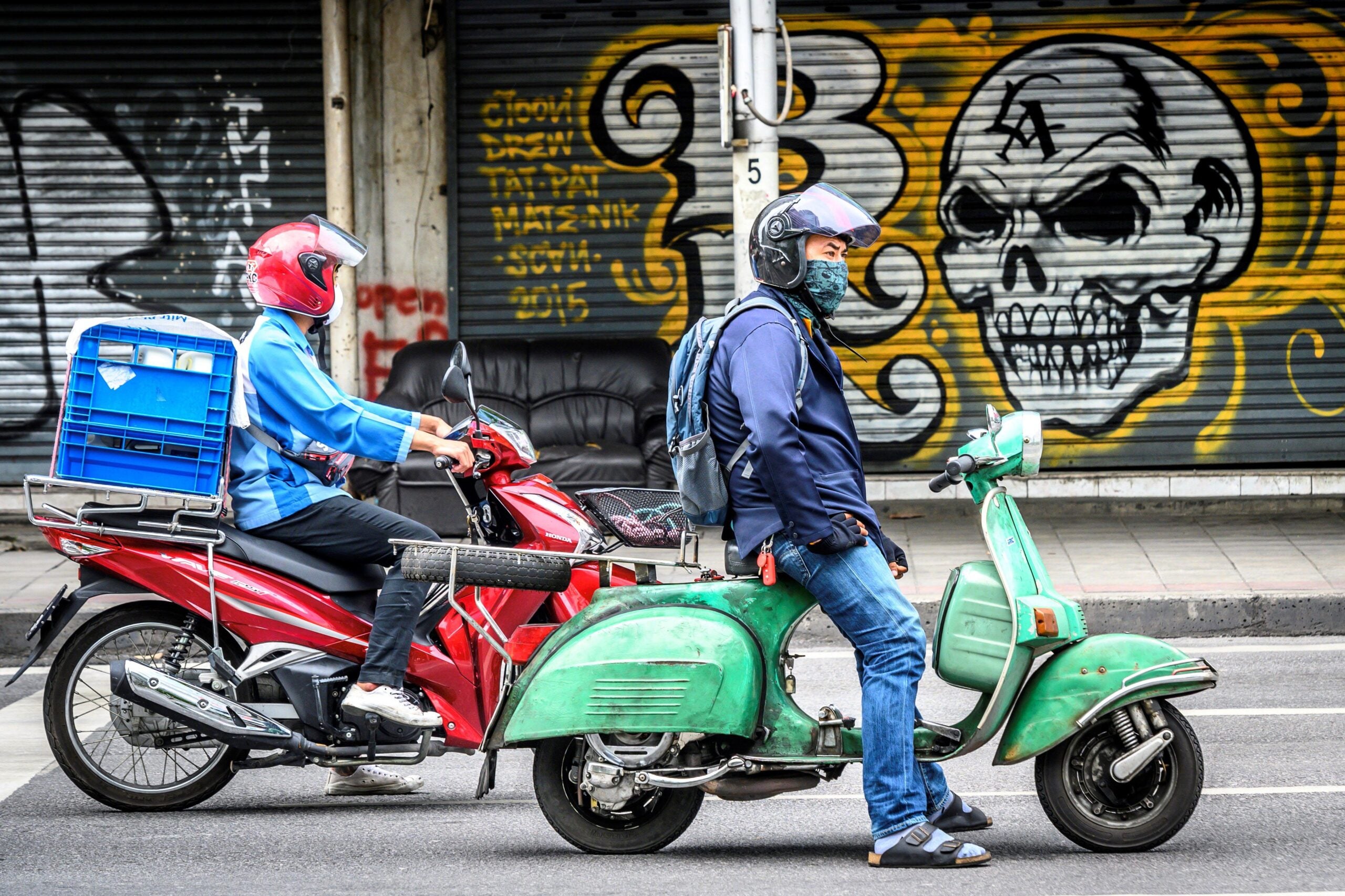 Motorcycles and scooters are ubiquitous in countries like India, China and (above) Thailand. Covid has motivated companies and governments to make more of them electric. (Photo by Mladen Antonov/Getty Images)

In Asia, the next few years may herald a true convergence, as environmentalists and entrepreneurs alike bet that its cities have an opportunity to lead the world in phasing out the internal combustion engine – at least when it comes to lightweight-motorcycle traffic.

Many Asian cities have far more motorcycles on the roads than cars, and with prices of e-scooters falling and the power of batteries rising, clean green vehicles have, with government subsidies, become cheaper than their gasoline-powered rivals. “There’s a huge opportunity for new business models,” says Madhav Pai, who runs India’s arm of the World Resources Institute’s Ross Center for Sustainable Cities.

“I believe this is the moment,” agrees Cedrick Tandong, founder and CEO of Three Wheels United, a venture-capital-funded e-vehicle financing startup in Bangalore, India. “A lot of cities have realised, due to Covid, that they could breathe clean air.”

Tandong’s company is essentially a bank that offers one key product: affordable loans to individuals who purchase lightweight electric vehicles, which are commonly used as taxis and cargo vans in the developing world. Over the past six years, Three Wheels has helped 3,000 people get these conveyances. Now, says Tandong, with the cost of e-vehicles coming down, it’s time to scale up. His group intends to finance the purchase of 10,000 of them in 2021. 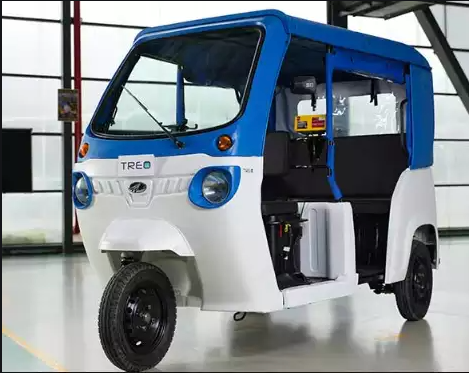 Though three-wheelers make up just 3% of the 20 million new vehicles purchased in India each year, Pai predicts they will be early converts to electric power. That’s because most of the 600,000 cargo and passenger three-wheelers that hit the road each year are used for short-distance local transport, so their drivers will not be worried about having their batteries die before the day is out. (An average electric motorcycle can travel perhaps 100km (62 miles) before the battery dies – though some super-expensive models boast that they reach ranges of more than 200 miles on a single charge.)

This is really the simplest way to impact the lives of the drivers.

India’s national government is helping fuel the transition to electric vehicles through a programme called FAME II (Faster Adoption and Manufacturing of Hybrid and EV), which gives manufacturers a subsidy of 60,000 rupees ($821) per electric vehicle. To date, the government claims the programme has put 41,550 new e-vehicles on the road. Many local and state governments in India have gotten in on the act as well, offering every purchaser of an e-vehicle a rebate of 30,000 rupees. India has also vowed to invest in public charging stations and to ensure that one-third of all conveyances on the road run on electric power within ten years. (In 2017, with great fanfare, the government announced that it would require all vehicles to go electric by the end of 2020, but it has since backpedalled from that full-throttled commitment.)

The incentives are cumbersome and bureaucratic, but they help Three Wheels show drivers they can cut their total costs by more than 30%. “There’s no genius in what we do,” says Tandong. “This is really the simplest way to impact the lives of the drivers.” He believes that if Three Wheels United can successfully scale up in India, it can bring its model to the rest of the world.

India could take an even bolder leap into the electric future if it pushes more powerfully for the 11 million motorcycles sold each year to go electric. This would have a massive impact on air pollution. Even without subsidies, however, the pandemic-induced fear of crowded and cramped spaces like those on buses and trains has led to a boom in demand for electric vehicles.

“Everywhere is a growth market”

NIU, the Chinese company that supplies the scooters for the Revel ride-sharing service in the US, saw sales crater at the start of the lockdown, then roar back as the world began to reopen. The company reports that sales are running 66% ahead of 2019 thanks primarily to the recovery in China, and it is projecting strong international growth in 2021. “Pretty much everywhere is a growth market for us,” company spokesman Hayward Wong wrote in an email.

Swag EV, an e-scooter startup in Bangkok that manufactured its first electric bikes just as Thailand locked down, also reports that demand is strong. Though a brand-new firm, Swag sold more than 500 bikes in 2020 and projects that sales will triple in 2021. Thailand leads the world in motorcycle ownership – close to 90% of the country’s households own a motorbike – and though the Thai government has so far resisted offering direct subsidies to purchasers, Swag’s potential is huge. “The market is just going to increase more and more,” says the firm’s founder and CEO, Janson Chen. Perhaps that’s why an investment arm of the Indian government invested $5m in Swag, leading to speculation that the company might bring its e-bikes to India.

VanMoof, a Dutch purveyor of high-end electric bicycles with stores in London, New York, San Francisco, Seattle and a handful of prominent cities in northern Europe, reported that its sales tripled in 2020. But converting the US from internal combustion to electric power will require a different set of policy prescriptions. That’s because the US car market is essentially the reverse of India’s. In India, people purchase 17 million motorcycles and scooters every year, and only about three million cars and trucks. The motorcycles can be quite cheap – and getting people to switch to electric can be strongly influenced by subsidies, tax advantages and other promotional policies. In the US, by contrast, people buy 17 million cars and light trucks every year, while snapping up only some 600,000 new motorcycles.

Many US states already offer healthy rebates to owners of electric cars and motorcycles (though, for the most part, not e-bicycles), but the impact has been slight. Pennsylvania, for instance, started offering subsidies of at least $750 for an electric car and $500 per e-motorcycle a decade ago, says Geoff Bristow, regional energy programme manager for the state’s Department of Environmental Protection. His statistics show that the state has handed out rebates for about 1,000 electric or hybrid cars and five electric motorcycles every year for the past six years. He suggests that a much more meaningful inducement for purchasers of electric cars comes from the federal government, which currently offers anyone who buys an electric car $7,500 off their income tax bill.

Federal support for going electric may get broader under President-Elect Joe Biden, whose campaign platform, though short on specifics, promised that his administration would be “aimed at ensuring 100% of new sales for light- and medium-duty vehicles will be electrified”.

Perhaps because of the postwar popularity of the Vespa, Italy is the only European country that is among the world leaders in motor scooter usage. Industry sources estimate that perhaps a quarter of the country’s families own a scooter. At the end of May, when Italy emerged from its early and devastating Covid lockdown, the government enacted a €500 ($609) incentive to push purchases of electric scooters – and the industry reported a 150% increase in sales.

It’s clear that getting gas vehicles off the streets can make a quick difference in air quality. Delhi, India’s capital, discovered this phenomenon in April, just a few weeks into the first Covid-19 lockdown. With most of its 5.5 million motorcycles sidelined, the city, deemed by the World Health Organization to be among the world’s most polluted, experienced something it hadn’t seen in decades – blue skies – and levels of harmful particles in the air fell by close to 60%. Given the rapidity with which the skies cleared, the idea of regaining fresh air by encouraging electric vehicles does not seem entirely far-fetched.

Despite all the hoopla, Benjamin de la Peña, an urban planner who is CEO of the Shared-Use Mobility Center and chairs the Global Partnership for Informal Transportation, offers a cautionary note: these supply-side attempts to get people to buy electric will not bolster mass transit, he says, and will only put more private vehicles on the road. That means the yield of all this public investment may only be quieter traffic jams and greener road accidents. “When you promote electric vehicles,” he says with dire simplicity, “what you get is electric traffic.”