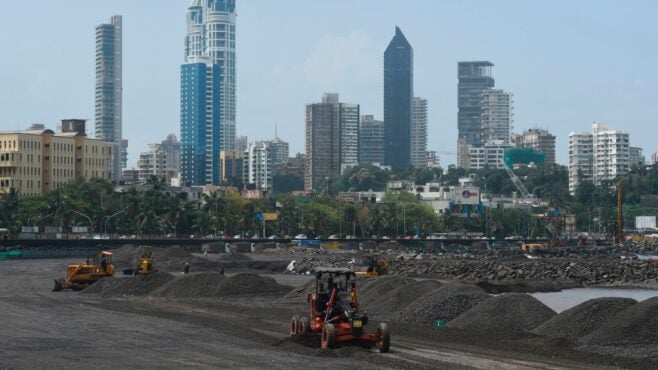 A worker operates a grader (front) at a coastal road project construction site in Mumbai on 31 August, 2020. (Photo by Punit Paranjpe/AFP via Getty Images)

Infrastructure often gets sold as a new solution to past mistakes. In Mumbai, India’s financial capital, an ongoing project to fill in part of the city’s coastline and build the initial 9.8km (6.1 miles) of an eight-lane Coastal Road can best be understood as an old mistake applied to a new problem. Building an expensive waterfront highway to “solve” traffic congestion highlights a consistent pattern in this tropical megalopolis of more than 20 million people: paving over green space and wetlands – even reclaiming part of the ocean – with new development.

“At a time when we recognise the city is getting hotter, it seems a little perverse to pave over some of the city’s last open spaces to build a road that will produce heat-capturing emissions and make the city hotter,” says Nikhil Anand, a professor at the University of Pennsylvania who writes about Indian infrastructure. “This is one of the few escapes for people to get fresh air and recreation, and it’s being repurposed for the interest of a wealthy few.”

The Coastal Road represents how a nexus of class and caste concerns, capital, concrete and road construction conspire to keep the most vulnerable citizens of India’s largest city at an inequitable risk of rising heat. The rich and poor in India often live “cheek to jowl”, says Anand, so poverty isn’t just expressed in spatial separation. It’s about access to resources, with open or recreational spaces understood to be places of privilege. The availability of trees, parks, drinking water and protection from the heat will become even more of a meaningful dividing line in coming decades.

“Baked-in climate change, in a broad sense, is the unequal global distribution of damage,” says Amir Jina, a professor of public policy who works with the Tata Center at the University of Chicago. “Mumbai is a lot closer to the frontiers of hot temperatures right now and only stands to face the negative effects of a hotter planet.”

Originally an archipelago of seven islands, Mumbai has been developed, filled in and paved over for decades, especially during a recent spate of runaway growth. The topographic shift is visible from above, says Roxy Koll, a climate scientist at the Indian Institute of Tropical Meteorology. Mangrove trees, the lungs and kidneys of the city due to their power to filter the air and absorb floodwaters, have been decimated and replaced with massive developments. The Mithi River, infamous for being declared an “open sewer” due to rampant pollution, now takes a winding path to the sea due to overdevelopment on its banks, rendering it less and less useful as a way to quickly disperse floodwaters.

The city’s rich have taken the high ground, leaving the poor – typically migrant workers from other parts of the country – to settle in low-lying, flood-prone informal settlements and shantytowns such as Dharavi. Nearly three million Mumbaikars live within a kilometre of the coastline, and many millions more live near rivers. All of these areas are vulnerable to extreme rainfall events, storm surges, rising sea levels and, most deadly, the combination of all three. According to Nandan Maluste, a banker and board member of Mumbai First, a public-private partnership, those who live in makeshift homes with tin roofs have to contend with flooding and rising temperatures: “Warmer weather means stronger storms and stronger humidity, especially in areas that can’t afford air conditioning,” he says. The British-era drainage system, built in the mid-19th century when mangroves and open green spaces were still plentiful, could handle roughly 25mm of water an hour, repeatedly exceeded during this summer’s record rainfall (a replacement system is still under construction). Koll estimates the city experienced a threefold increase in extreme rainfall events from 1950 to 2019, and a recent analysis by McKinsey projected that Mumbai will see a rise in the number of intense flash flood events of nearly 25% by 2050.

“The government’s response is largely one of neglect,” says D Parthasarathy, who studies cities and climate change at the Indian Institute of Technology Bombay. “The people who live in these informal settlements are largely migrants, religious minorities or lower castes, and Mumbai has a history of discrimination against these groups. It’s also not a vote bank local leaders count on.”

The late former Prime Minister Indira Gandhi famously said, “The biggest polluter is poverty.” It’s also the biggest barrier to individual Indians’ building more resilient homes. Hotter days deliver a financial blow to Mumbai’s poor, who often have access to water for just a few hours a day. In industries such as construction and manufacturing, where workers face sweltering conditions and get paid by the piece or the project, not the hour, making money means more effort during hot, humid days. The International Labour Organization estimates that India will lose 5.8% of its working hours due to heat stress by 2030. That is equivalent to 34 million full-time jobs.

“Let’s get the poverty problem solved first, and the environment is a luxury good we can get to later,” Anand says. “That’s the typical approach. But those on the front lines, the poor and dispossessed, face large, significant and structural environmental issues now.”

Jina helped conduct a yet-unpublished study with 600 low-income Indian households where they were given subsidies to install cool roofs or apply light-coloured paint to reflect heat, both effective passive-cooling interventions with track records of success. He found that respondents preferred to use the money to pay for other things and “got used to the heat being hot”.

“It seemed that what people wanted, what they were demanding, was the few hundred dollars we spent painting their roofs,” he says. It wasn’t that they didn’t like the cooling effect of the roofs, but the savings were more important. “From their point of view, perhaps the temperature exposure wasn’t the worst thing they were facing,” Jina adds.

Complicating the hope that Mumbai’s poor could be induced or even paid to build more climate-resistant homes is the lack of landownership. Many of Mumbai’s millions of slum dwellers quickly find out housing is their biggest expense, even in informal settlements, and they don’t own their domiciles. Even if they had enough savings to build or repair a dwelling, they don’t have a title or long-term financial reasons to upgrade.

While more immediate financial concerns mean India’s poor can’t afford to alleviate sweltering temperatures, the heat will undoubtedly get worse. Mumbai and other Indian cities will soon face days where the wet-bulb temperature – a measure of heat stress that includes humidity, wind speed and other factors – crosses 35°C (95°F), a point where healthy adults can’t survive outside for more than a couple of hours. Workers will toil all day in the heat, then return to makeshift housing with tin roofs that trap the heat, meaning less sleep and an inability to recover by the time the next workday begins. Melissa LoPalo at Montana State University studied workers in Bangladesh and Pakistan who conduct household surveys; when wet-bulb temperature crossed 29°C (85°F), their productivity dropped by 13% to 14%.

Despite its location and the urban heat island effect, Mumbai historically sees few temperature-related deaths, especially compared with inland and agricultural regions of Maharashtra, the state where it’s located (Nagpur, for instance, located more than 800km inland, saw five heat-related deaths last May, according to state records). Heat Action Plans across the nation have helped lower the mortality of recent heatwaves in India; a government report found just 25 deaths nationwide in 2018, compared with more than 2,000 in 2015, and as of late May, one of Mumbai’s hottest periods of the year, there were no heat-related deaths reported in Maharashtra.

Heat resiliency typically isn’t part of Mumbai’s environmental policy discussion because flooding is such an immediate threat. Raghu Murtugudde, an earth climate scientist at the University of Maryland, says long-term climate shifts will deluge Mumbai. Warming in the Bay of Bengal and Arabian Sea will mean late-season cyclones with more moisture, which will roll over Mumbai’s heat islands (themselves dense with moisture), hit the surrounding Western Ghats mountains and “explode like a sponge”, he says. Murtugudde, who has overseen the creation of an early-warning SMS system for flooding in the Chesapeake Bay, says the new one run by the government in Mumbai, which reaches “several hundred thousand” residents, has helped make recent record deluges less deadly. Currently, officials are working on the “last-mile problem” and getting the alerts translated into the languages spoken by migrant workers. This effort sidesteps catastrophe while large-scale resilience efforts run into so many barriers: the poor don’t have resources, the government isn’t engaged, and there aren’t broad  studies of the benefits of investing in the expensive process of retrofitting older buildings.

The rising heat and water, Maluste says, suggests a need to “radically reimagine Mumbai”; while Mumbai First has an action plan for flood prevention, he personally thinks about abandoning much of the topography that has sustained the city for centuries. And growth marches on: the city’s remaining mangroves, which cover 6,600ha, will not survive the city’s current growth trajectory, including projects like the Coastal Road.

“I don’t like to talk about it as apocalyptic,” says Jina, “but climate change will make society less fair and affect how we think about ourselves as a society on this planet.”

This article is part of a reported series focused on how increasing numbers of high-heat days are affecting cities around the globe. Come back to City Monitor in the coming weeks for additional reports.