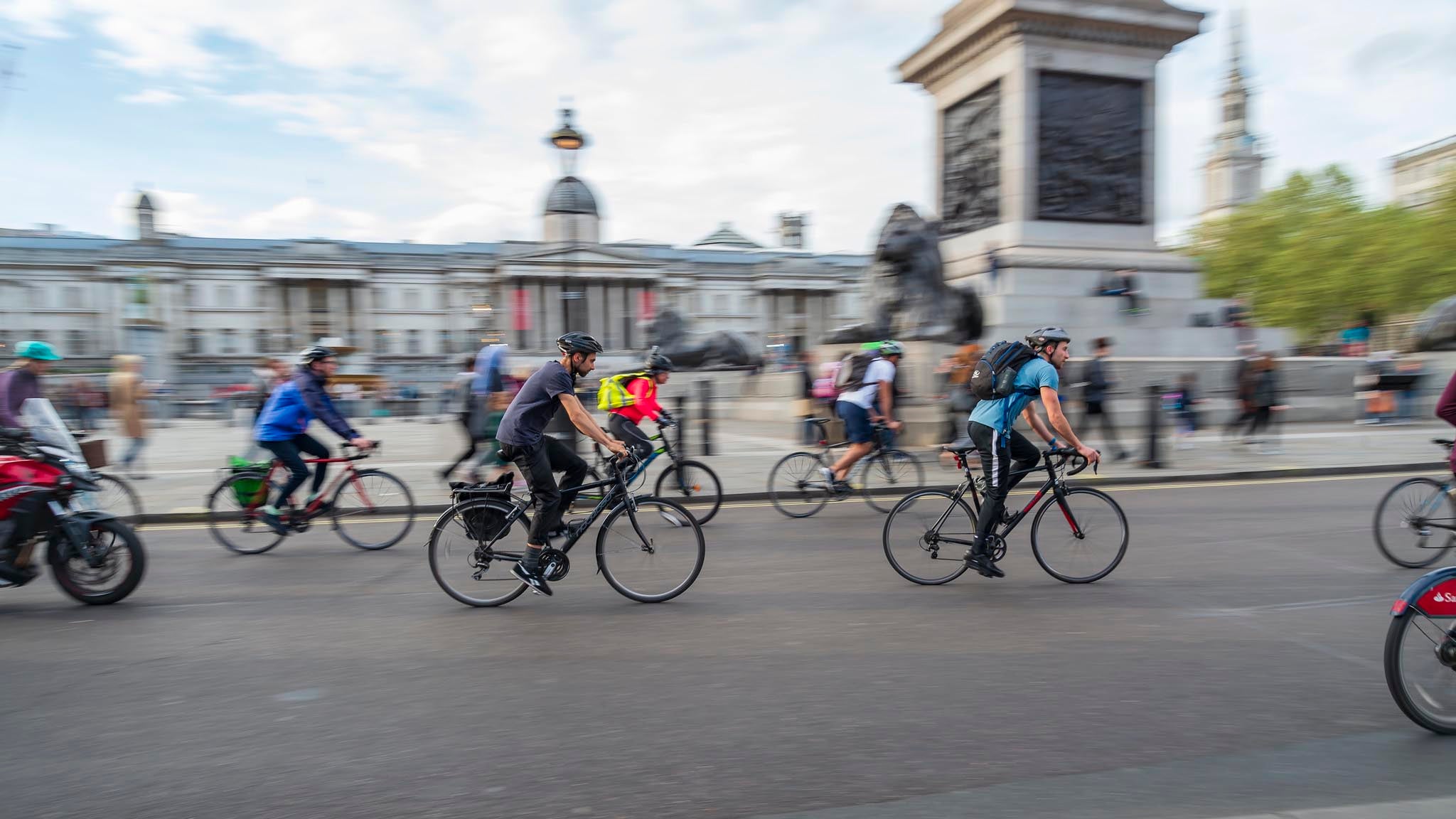 Cyclists in London’s Trafalgar Square. The city has seen a 119% increase in cycling since May. (Photo by Sergio Ruiz)

In the mid-20th century, bicycle traffic was sky-high in the UK at 14.7 billion vehicle miles travelled annually. Countless bike manufacturers dotted the Midlands in England, and racing velodromes were all the rage.

But cycling saw a steep decline as the motor age took off. And in the UK, it plunged the nation to the near-bottom of the list of 28 European countries for cycling modal share (2%). (Although this data can be difficult to harmonise among different countries, advocates agree that the UK is demonstrably low.) Most cycling trips are now seen as leisure, characterising the ‘Lycra louts’ stereotype popular in the country. They make up a fraction of commuting trips (4%) and even less of school trips (2%).

Then, gradually, that began to change: in 2018, 3.33 billion vehicle miles were notched by riders – 32% higher than 20 years ago. Since the early aughts, rates have steadily increased in UK cities, largely due to infrastructure improvements throughout the country. That is perhaps most pronounced in London, where cycling is becoming as crucial to the capital city’s identity as its bright-red buses.

Covid-19 has transformed everything, not least the way people get around cities. Heavily localised mobility has ushered in a cycling moment not seen in generations. The central government is now heralding a ‘golden age of cycling’. Its new initiative, Gear Change: A bold vision for cycling and walking, features measures intended to cement the shift from away from cars.

That ambitious push has already begun.

In May 2020, the UK central government announced an “emergency active travel fund” dedicated to new pedestrian and cycling infrastructure to aid in social distancing. Under the new Active Travel England office, funding was to be released to municipalities who applied in tranches, with strict design stipulations and legal cred to utilise experimental traffic orders for quick deployment. Pre-existing plans were accelerated, while entirely new ones were hatched at a rapid clip.

The bulk of Tranche 1 went to ‘pop-up’ cycle lanes, footpath expansion, pedestrianisation and School Streets, where motor traffic is stopped outside of learning institutions in the morning and afternoon rushes. Additionally, low-traffic neighbourhoods, which use planters, bollards and cameras to stifle ‘rat-running’, or when drivers use residential streets as shortcuts, were included. Albeit controversial in some areas, the project’s aim is to make more room for walking and cycling. The more sizeable Tranche 2, set in motion in November, heightened focus on making interventions permanent.

Simon Munk of the London Cycling Campaign says new schemes boost not only use but also mainstream appeal. “Each new low-traffic neighbourhood, protected cycle track or School Street brings more photos and videos of mums with cargo bikes, elderly people on upright bikes, folks cycling in everyday clothes, handcycles, trikes and delivery riders out and about,” he explains.

Munk welcomes the new “guidance and toughness of approach”. There had been funding previously, “but never with such clear expectations attached”, he says. However, he worries that this investment in two feet or wheels is being paralleled by massive spending in road building.

“The government appears to believe it can continue building roads, making driving more convenient for more people, and somehow achieve its climate obligations and enable walking and cycling by reallocating road space away from cars while simultaneously providing more space for cars,” Munk argues. “That isn’t a coherent strategy – but it’s a step in the right direction.”

Prior to the lockdown, electric bikes made up only a sliver of purchases in the UK, but the numbers have since picked up. Growth in April, right after quarantine began, was nearly double that of the first quarter of 2020. Online searches for e-bikes have also skyrocketed. Advocates argue that the niche market has ample room to grow and have called on the government to provide direct subsidies like those that exist for electric cars.

Now that’s happening. In November, news broke that a pilot will launch in 2021 for an e-bike subsidy programme, which could cut the costly price tag by a third. Laura Laker, who covers active travel for the Guardian, says the initiative is long overdue. “The UK currently lags behind countries like Germany, where e-bikes are 30% of bikes sold annually,” she says. “Here the latest figures are more like 3% and understanding of e-bikes similarly lags behind.”

Laker adds that research conducted on similar programmes has shown promise. Up to 70% of e-bike trips replaced car journeys among subsidy recipients and could prove to be twice as effective in cutting carbon emissions as electric-vehicle (EV) grants. Studies into cycling propensity found that one in five people in the UK could cycle to work with a network of safe cycle routes; with e-bikes, it’s one in four.

With nearly 70% of daily trips less than five miles, which an e-bike can travel in about 20 minutes, Laker says “it’s easy to see the potential”. “They not only help flatten hills, but they can enable people with disabilities to cycle, and for the able-bodied they mean longer distances can be cycled in regular clothes,” she said.

The long lines at bike shops formed during the first lockdown have yet to let up, signalling sustained interest. Additionally, councils nationwide are offering free maintenance and training workshops, but a concerted effort has also come from Westminster.

The £2bn ($2.66bn) ‘active travel’ package also includes 500,000 vouchers of £50 each. Released incrementally, these vouchers can be used at select retailers by those interested in fixing up old wheels. The first round disappeared within hours, crashing the government website.

An event this disruptive to daily lives has entirely reshuffled cities’ transportation landscapes, simultaneously decimating public transit ridership, launching ‘carmageddon’ and encouraging hordes of people to walk and cycle. It will be some time before the dust settles and cities return to ‘normal’ traffic flows, but there are signs that new levels of cycling in the UK will stick around and perhaps even push the country up on the cycling modal-share list next time around.

In a tweet last month, Will Norman, London’s walking and cycling commissioner, said that a data scientist at Transport for London thought the “system had broken” when they read weekend traffic at high-flow sites was up 300%. A recent analysis on this site shows that Santander Cycles, London’s bicycle-hire network, has broken records. In Liverpool, cycling is up 222% since the first lockdown; Manchester, 169%; Glasgow, 146%; and Birmingham, 134%. On average, the ten biggest cities saw a 127% increase since last year, according to data from Strava and Sustrans.

And that’s without most of the interventions mentioned here. Shovels are in the ground now for Tranche 2 projects, the e-bike subsidies haven’t launched yet, and more repair vouchers are coming.

So has a ‘golden age of cycling’ arrived? It looks like we’re about to find out.

John Surico is a freelance journalist based in Queens, New York.