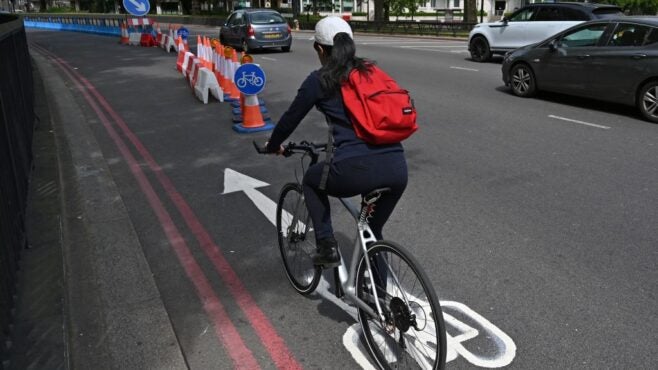 Before the pandemic, women made up just one quarter of Britain’s bike commuters. (Glyn Kirk / AFP via Getty Images)

“It’s great,” she says, “it’s so quick, and it’s quite energising. It feels so freeing.” Still, she admits to feeling anxious: “It’s not a relaxing cycle”. The route she takes is not segregated from vehicles, and cars have been speeding on emptier streets. “It can be scary how close drivers come to you,” McKee says.

As cities in the UK and around the world grapple with coming changes to commuter behaviour in response to the pandemic, many are making welcome upgrades to cycling infrastructure. The UK government last week pledged £2 billion for cycling and walking infrastructure, and Prime Minister Boris Johnson has envisioned life after Covid as a “golden age of cycling”.

With much work to reach that golden age, there’s even more to be done to make bike commuting as accessible to women as it is to men. Prior to the coronavirus crisis, just 2% of UK commuters travelled by bike. Of that small group, only a quarter were women.

Research has consistently shown that safety concerns are the key barrier that stop women from cycling, and the surest way to address that is no mystery.

“Number one is to ensure the cycling infrastructure offers proper separation from motor traffic,” says Rachel Aldred, a professor of transport at the University of Westminster. “This doesn’t have to mean expensive – but it does mean not just a line of paint, and conversely not just plonking cyclists on a footway. Research shows that while women and men both want protected facilities, women express stronger preferences. So good infrastructure will help us level the gender gap.”

Indeed, in places with the highest levels of cycling, like the Netherlands and Copenhagen, cycle paths are segregated from heavy traffic and women cycle more than men. Aldred’s research shows how hectic road conditions perpetuate expectations of who can cycle in the city. When riding alongside traffic, slower cyclists have around three times the “near miss” rates – or frightening non-injury incidents – as the fastest cyclists.

“We have ended up in a vicious circle, where only the risk tolerant can cope with UK roads,” she says. “Thus we mostly see cyclists with a certain look and demographic (rather than being spread across the population), and then we all – planners, the public, the media – imagine ‘the cyclist’ as a sporty young man.”

To address this, she says authorities need to consider equity in all aspects of their cycle planning, design facilities, and publicity. This includes factoring in other inequalities in cycling such as age and disability, and ensuring new routes don’t just serve more affluent communities.

Women also tend to make shorter trips by bike than men do, Aldred’s research shows. That means developing direct routes is key to getting more women on bikes. “If we build wiggly indirect routes, we unnecessarily lengthen journeys and build in inequality where it’s not needed,” she wrote in 2015. “Even though women’s propensity to cycle declines faster with distance, women generally make shorter trips, so this doesn’t have to mean less cycling (it doesn’t in the Netherlands).”

Traffic levels fell to 1950s levels at the start of lockdown, meaning the opportunity for change could come quickly. Speed and sportiness are, if only for the moment, no longer a pre-requisite for cycling safely. And there’s an unprecedented number of cities reclaiming space from cars to provide for safer pedestrian and cycling routes.

The government has also pledged £250 million for immediate “pop-up” cycle lanes and instructed local authorities to put provisions in place. As traffic levels start to pick up, Birmingham, Liverpool and London are the latest cities to bring forward ambitious plans, following the lead of global cities like Paris and Milan.

These conditions combined have already encouraged some women around the UK to try out cycling to work, particularly key health workers.

Sophie Stanley, a junior doctor in Leicester, has started cycling to her hospital during lockdown. Leicester’s city council has been particularly proactive, being one of the first UK cities to introduce temporary new cycle lanes along main roads. Last month it launched Leicester Bike Aid in partnership with local bike shops, providing free bike loans and fixes for keyworkers. Within a month, the scheme had loaned out 80 bikes and performed around 180 bike fixes, Ride Leicester Project Manager Andy Salkeld says.

If not for her bike, Stanley would have had to drive, which she says is her least preferred option. Her commute is nearly all off road and well lit, two factors that help her feel safe in transit. She also appreciates the chance to get some exercise before and after her 12-hour shifts.

“I like being outside and it’s nice to get fresh air before and after a shift,” Stanley says. “Even if you stand on your feet all day, you still aren’t doing any cardiovascular exercise.”

Similarly, Romina De.Paolis and Prudence Muswede are careworkers at Fairdene Lodge Carehome in Brighton, where they support older people with dementia. With lockdown imminent, the owner of Fairdene moved swiftly to rent bikes from PedalPeople for careworkers so they wouldn’t have to take public transport and risk infection. Neither De.Paolis nor Muswede had previously considered cycling, but they’ve both been pleasantly surprised by the positive impact on their lives.

De.Paolis, who is 47 and moved from Italy last year, now cycles 10 minutes to work along the waterfront instead of her usual 25-35 minute bus ride. “It’s very quick as well as beautiful,” she says. “I prefer the bike because I get exercise in the morning. My life is better now.”

Muswede, originally from Zimbabwe, started cycling because there was no space to park. “I had no choice,” she explains. The alternative was a 45-minute walk before and after a 12-hour shift. She says she was initially nervous about cycling, and stayed on the pavement.

“Now I gained the confidence and I can cycle on the road, which is another step for me,” she says, though she isn’t sure yet if she’ll feel comfortable cycling when there are more cars on the road.

Ruth Louise Poole, an NHS researcher in Cardiff, Wales, has been riding her e-bike to the city centre during lockdown. Anticipating the return of traffic, she says, “I’ll try to avoid main roads, but there’s speed bumps and an awkward roundabout. There’s a cycle path, but it’s really short and cuts off, so it’s not that helpful.”

Not only will her route be indirect and longer, it also lacks comprehensive infrastructure, creating further barriers to Poole’s cycle commute. She hopes Cardiff will fast-track its planned five cycle superhighways, although she’s unsure whether they will cater to her route.

In London, cycle superhighways have made a big difference. Teresa Loy has been cycling in the capital for 30 years, since she was a university student. “It’s infinitely better now,” she says referring to London’s cycle superhighways rolled out during Boris Johnson’s term as mayor. “Those segregated cycle routes are an absolute dream compared to what I was used to.”

“It was so fantastic. I was in this big gang of 15 cyclists, it was so exciting and fun, and I thought ‘Wow it’s like Copenhagen!’” she says. “Then we stopped at traffic lights and I looked around and only two of us were women and only two of us weren’t wearing a helmet. So basically everyone was male, wearing a helmet and high vis. There was nobody who was just like someone in the Netherlands in ordinary attire going to work. And there was this aggressive sporty vibe. I realised ‘No, this isn’t like Copenhagen.’”

Loy says the lack of comprehensive, safe infrastructure has bred a “tribal” and “contentious” road culture in the capital that pits cyclists against drivers. Moreover, despite the improved cycle infrastructure – which puts many other UK cities to shame – cycling is still perceived to be dangerous in London.

“If you meet someone new and you tell them you cycle in London they think you have a death wish,” says Charlotte Fontbin, a London anaesthetic practitioner who learned to cycle five years ago at age 27. “The past few weeks have been so nice seeing so many more people on bikes and I hope that confidence continues, but there’s a lot of unsafe driving.”

Loy also believes cars, bikes, and pedestrians need their own segregated space on main roads. She has her own idea of what it will take for Britain’s cycling revolution to truly take off. “When we have cycling space appropriate for mums and kids, we’re going to see a huge shift.”

In the upcoming weeks and months we’ll see whether Britain pulls it off.

Andrea Sandor is a writer based in Manchester, England.