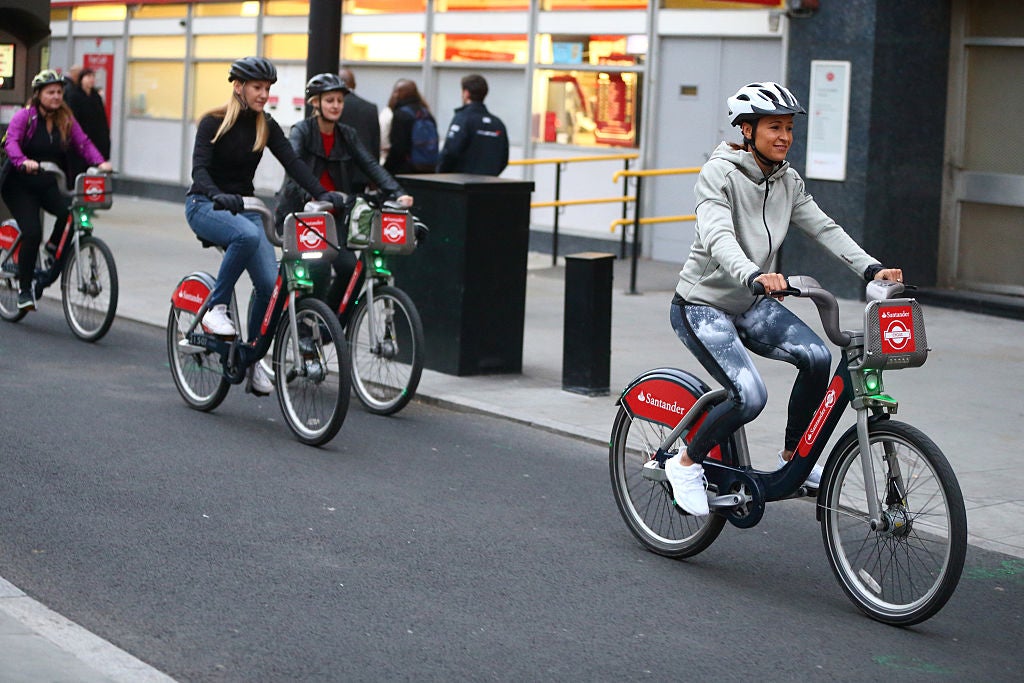 Santander Cycles has been offering hospital workers free trips since March, resulting in more than 75,000 so far. (Photo by Jordan Mansfield/Getty Images)

While public transit usage remains well below pre-Covid levels in New York City and London, the cities’ bike share programmes have seen strong rebounds since the start of the pandemic.

Analysis by City Monitor has found May-September 2020 brought record-breaking numbers of trips for the bike share schemes in New York City and London. In London, bike share riders took more than a third of a million additional journeys between May and August 2020 compared with the same time period in 2019. New York City pulled past its record number of monthly rides this September with more than 43,000 additional trips during the month.

The increase in usage is not incidental: data suggests that Covid-related membership campaigns played a role. In addition to normal membership programmes, all three bike share schemes we analysed – in New York, London and San Francisco – offered free access to essential workers during the pandemic. New York and London’s campaigns are still going, and the former’s offered memberships to a wider array of essential workers. Those two bike shares reported successful returns from those campaigns.

San Francisco’s Bay Wheels, meanwhile, has not seen record numbers, but local circumstances played a role in that, too. In California’s Bay Area, bike share usage increased from initial Covid lockdown periods, but an extreme wildfire season caused air quality issues that likely had an adverse effect on ridership.

New York City’s bike share, Citi Bike, had its best month ever in September with 2.49 million trips. That narrowly edged out last September’s 2.44 million rides, a record at the time. This September also marked the first month since initial Covid lockdowns in March that journeys were up from 2019 benchmarks.

Looked at on a weekly scale, Citi Bike began regaining its pre-Covid ridership in early June.

It is important to recognise that these record figures for the scheme come at a time when general mobility remains far lower than is usual for the city: New Yorkers are making more bike share trips at a time when they are making fewer trips overall. New York City’s public transit numbers, for example, are still less than half of their pre-Covid levels.

The percentage of bike share journeys taken by non-member Citi Bike riders has been on the rise since March of this year. Since April these voyages, paid for individually rather than through a membership, make up a greater proportion of total rides than they did last year.

However, Citi Bike’s membership push has been strong, especially among essential workers. And it appears that their membership campaigns are proving successful.

According to Citi Bike, the system gave out nearly 30,000 free memberships through the programme. And essential workers seem to be taking advantage of their memberships.

This year the relationship between decreased bike share usage and the percentage of journeys taken by members is less strong, meaning members are increasingly more responsible for boosting overall ridership.

This would be less surprising – and potentially more worrying – if the system had seen substantially fewer overall journeys in 2020 than in 2019. After all, there were far fewer out-of-town visitors in 2020. The system did see fewer rides in the first two months of the pandemic, but by July monthly voyages were only down 3.5%. By September, Citi Bike outings had crested 2019 levels.

By contrast, San Francisco’s Bay Wheels saw a rather strong correlation between increases in total trips between June and September and increases in percentage of trips taken by members. However, the finding is less surprising considering their Covid-era ridership numbers remained far below 2019 levels. As tourists and out-of-town visitors failed to increase total ridership numbers, members, who are likely residents, contributed more to journey increases.

London’s Santander Cycles has also been having a strong year after ridership dropped off on 23 March. By the first week of May, ridership numbers were back to 2019 levels and have since continued to grow.

Data on member and non-member voyages was not available in the trip-level set, but Claire Jermany, a spokesperson for Transport for London’s Streets and Policing department, says that in the first eight months of 2020 Santander Cycles saw new member sign-ups increase by 173% compared with last year.

Public transit data from Transport for London and the US Federal Transit Administration illustrates what we already know: far fewer people have been using public transit since March. But as London’s public transit journeys have increased – and they have, more than the other cities we looked at for this analysis – the strong performance of the bike share scheme has continued. This is a positive sign that the performance figures are more than a Covid-era blip. Santander Cycles has been offering hospital workers free trips since March. London’s National Health Service workers receive codes for free rides under 30 minutes. To date, more than 75,000 codes have been redeemed.

Not all bike share schemes are seeing the same trends. Bay Wheels in San Francisco has seen ridership below 2019 levels since initial Covid lockdowns. The scheme averaged just over 35,000 weekly trips between June and September 2020, as compared with nearly 51,000 during the same time period last year.

One reasonable part of the explanation has nothing to do with Covid, or the scheme itself. Poor air quality from late-summer fires in the western parts of the US may well be a factor. Air quality data from AirNow crossed with Bay Wheels trips data show a strong correlation between a decrease in total rides and an increase in poor air quality.

Another reason overall ridership was down is that the bike share did not come close to sustaining its ridership numbers among members compared with last year. Monthly trips taken by Bay Wheels members were down an average of 67% between June and September when compared with 2019 numbers.

The Bay Area’s membership offering for essential workers was also more limited, offering 30-day memberships rather than an annual or ongoing membership like New York and London. The programme was also only open to healthcare workers and not expanded to transit workers, as Citi Bike’s was.

City Monitor’s analysis of Citi Bike trips data between June and September found that the most popular Citi Bike destinations were more geographically restricted than those revealed by our previous analysis of March-to-May trends.

Unlike the geographic contraction in New York’s most popular destinations, those of Bay Wheels have expanded this year. In our previous analysis, all 20 of the most frequented destinations between mid-March and the end of May were in San Francisco, even though the Bay Area bike share also serves San Jose and the East Bay.

Our new analysis reveals that stops near East Saint James Street and North 1st Street in San Jose ranked eighth most popular in June-September 2020 compared with their 82nd ranking during the same period in 2019.

Destinations along San Francisco’s Market Street are consistently popular. Of the 20 most popular Bay Wheels destinations between June and September 2020, six of them are along Market Street between Castro and Embarcadero Streets.

After a large portion of the Market Street corridor was made car-free in January 2020, bike traffic increased to levels unexpected by project developers, according to a November 2020 project update. Between January and mid-March, total bike ridership, including both Bay Wheels and personal bike, increased on Market Street by 25%. Though bike rates fell once Covid hit, it is expected that they will rebound. Due to this unexpected increase in bike volume, the developers decided to widen the bike lanes from 8ft to 11ft.

In London, stops near public transit rail lines were less popular in May-August 2020 when compared with the same period in 2019.

Stops near London’s large green spaces and waterfronts, however, saw jumps in popularity, a point consistent with Google mobility data that tracks visitation trends for places such as parks, gardens, public beaches and marinas.

A new Santander Cycles stop that was added at the Westminster Pier late last year made it to ninth most popular destination between May-August 2020.

Whether bike shares are being used for work commutes, essential shopping or recreation, ridership trends during Covid indicate that they are becoming increasingly important in the lives of city residents.

New members contributed to record-breaking trip numbers, and because they are likely residents rather than tourists, they are a potentially sustainable base for growth. They are the reason why in London, as in New York, bike share schemes might well emerge from Covid as a more significant part of the transport mix than ever before.

Alexandra Kanik is a data reporter for City Monitor.