Covid is changing the ways we get around cities. Governments are advising against the use of mass transit except for essential travel, and those who need to go out are increasingly opting to use more-personal forms of transportation, such as bicycles, scooters and their own two feet. 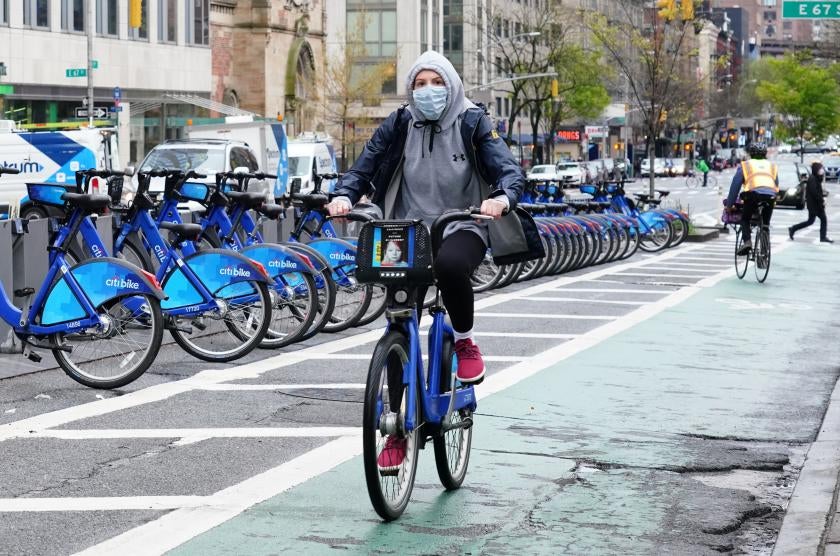 A person in a protective mask rides a Citi Bike during the coronavirus pandemic on 24 April, 2020, in New York City. (Photo by Cindy Ord/Getty Images)

With cities across the world in search of sustainable and safe transport solutions, City Monitor examined recent bike-share data to see if there are any lessons to be learned from the ways in which people have been using bikes during the pandemic.

We analysed bike-share data from six US cities in which Lyft partners with city governments to manage their systems. Our analysis showed that the places people are going most often in those locales has changed, often in response to local policy. It also showed that when cities enacted new policies, such as offering free passes to essential workers, as well as adding or expanding docking stations near essential businesses, ridership fared better.

Overall, people have been travelling less. Stay-at-home orders and limited business operations have meant that whenever possible, people are staying put. However, according to Apple mobility data, by the end of May, mass transit ridership was down much more than bike-share usage.

We looked at the total number of bike-share trips taken during the crisis as well as how the locations riders visited changed. In most of the cities we analysed, bike-share data suggested that the vast majority of trips were made to access essential businesses. Parks and other outdoor recreation spaces also topped the list of where people were travelling.

Bay Wheels, the San Francisco Bay Area’s bike-share system, includes the California cities of Oakland, San Jose, San Francisco, Berkeley and Emeryville. Our geographic analysis focused on the top 20 bike-share destinations in 2019 and 2020 between 17 March and the end of May. All top 20 destinations for both years were in the city of San Francisco.

The Embarcadero Market station was the second-most-popular destination in both 2020 and 2019.

But after those two popular destinations, it was the stations nearest to hospitals and social-service providers that saw greater popularity during 2020.

Our analysis suggests that in cases where residents still needed to get to essential healthcare jobs, relatively large numbers were doing so via bike-share.

In addition to hospitals and medical centres, it appears that bike-share was being used to access social-service providers. The 11th-most-popular Bay Wheels destination in 2020 is located at Eighth and Howard, which is centrally located to Episcopal Community Services, a social-service provider for homeless and severely low-income individuals and families, as well as the Sanctuary, which provides 24-hour access to emergency shelter for homeless adults. More than 6% of trips in May 2020 were taken by low-income residents taking part in the Bike Share for All program.

Citi Bike serves Manhattan, parts of Brooklyn and Queens, and Jersey City in New Jersey. The top 20 stations visited between 22 March and the end of May in both 2019 and 2020 were all located in Manhattan and Brooklyn.

On 30 April, Citi Bike extended and enhanced the program. Critical workforce memberships were issued for a full year, and benefits were extended to include workers at food-related non-profits as well as essential city employees. The system was able to issue over 20,000 memberships through the program. Essential workers took more than 146,000 rides throughout April and May.

The First Avenue and East 68th Street station – near Memorial Sloan Kettering Cancer Center, New York-Presbyterian/Weill Cornell Medical Center and the Hospital for Special Surgery – was the third-most-popular destination for bike-share trips during the 2020 time period but was only 55th-most-popular during the same period in 2019. Despite there being fewer trips overall on Citi Bike during the 2020 period, this station saw more trips. There were 13,422 trips that ended here in 2020, versus 13,350 in 2019.

The East 33rd Street and First Avenue station, located directly in front of NYU Langone Medical Center and just blocks from NYC Health + Hospitals/Bellevue, was the tenth-most-popular destination in 2020, compared with 78th in 2019.

Citi Bike was the only system we examined to extend its essential-worker program to transit workers. The station at 12th Avenue and West 125th Street, which is a block away from the Manhattanville Bus Depot, ranked 13th-most-popular in 2020. A new docking station was added there in February 2020, so there are no 2019 trips recorded there.

Bluebikes, the Boston metro area’s bike-share system, includes the cities of Boston, Brookline, Cambridge, Everett and Somerville. Our analysis looked at the top 20 stations visited between 15 March and the end of May in both 2019 and 2020.

On 15 March, Boston’s mayor declared a public-health emergency due to Covid and limited the activities of businesses such as restaurants and bars. On 24 March, the governor of Massachusetts ordered all non-essential businesses to close. The next day, Bluebikes announced free memberships for hospital staff. On 17 April, free memberships were extended to more essential workers, including grocery store and pharmacy employees.

There were 11 new additions to the top 20 most popular Bluebikes destinations when comparing 2020 with the same time period in 2019.

The Longwood Avenue and Binney Street station – near Boston Children’s Hospital, Dana-Farber Cancer Institute, Joslin Diabetes Center, Brigham & Women’s Hospital and Harvard Medical School – was the eighth-most-popular destination, with 2,066 trips ending here. During the same period in 2019, it was the 30th-most-popular, with 3,452 trips. The Packard’s Corner Station – near HRI Hospital and two grocery stores – was sixth-most-popular in 2020, a considerable jump from its rank of 53rd in 2019.

On 23 March, all non-essential businesses in Maryland and Virginia were ordered to close. A week later, Maryland, Virginia and DC issued shelter-in-place orders for residents. On 3 April, Capital Bikeshare announced free 30-day memberships for essential employees, including healthcare, food service and food retailer workers. On 2 May, the membership program was extended for another month.

Destinations near pharmacies and grocery stores found their way onto the list of top Capital Bikeshare destinations during the 2020 time period.

The Fourth and M Street SW station is located outside one of the few grocery stores that serves the Southwest Waterfront neighbourhood. It was the fifth-most-popular destination during this time period, with 2,453 trips ending there. During the same period in 2019, this station ranked 25th, with 4,961 trips ending there.

The top four stations in the 2020 time period were all located along the Willamette River, suggesting that bike-share trips during this period were mainly used for recreation.

Destinations near hospitals did not show up among the top 20 stations as they did in other cities. Instead, we saw animal hospitals, grocery stores and pharmacies.

Two stations near NW 11th and NW Northrup Street were new additions to the top 20 list during 2020. Both are located near parks.

The station at NW 20th and Burnside is near a grocery store and a pharmacy. In 2020, the station was 12th-most-popular. Last year during the same time period, it was 39th.

A couple of the newly popular destinations were near organisations that offer services to low-income residents.

Biketown offers both docked and dockless bikes. While there is no station on the block of West Burnside and Northwest Broadway, the area, which is near the CCC Recovery Clinic and the Old Town Clinic, was tenth-most-popular in 2020, compared with 68th in 2019. Both facilities offer addiction treatment services to low-income residents. The Old Town Clinic also offers primary-care and mental-health services.

Trips to SW 11th and Columbia, near the New Avenues for Youth, a homeless-youth outreach program, and St. Stephen’s Episcopal Church, which offers free meals and services to low-income and homeless residents, increased as well. The location was the 17th-most-popular destination, compared with a rank of 62nd in 2019.

Columbus’s bike-share system, CoGo, is the least-used among the cities we examined. In 2019, the system averaged about 3,074 trips per month. By contrast, BiketownPDX, which operates in a city with nearly 240,000 fewer residents, averaged 26,972 monthly rides in 2019.

On 20 March, Ohio’s governor issued a stay-at-home order in response to Covid. On 15 May, CoGo began offering free rides to healthcare workers. CoGo did not renew the month-long program.

The Columbus bike-share system experienced the least variability between the 2020 and 2019 time periods. Of the 20 most popular destinations during 2020, 12 stations were also among the most popular in the same time period in 2019. The High Street and Second Avenue station near Select Specialty Hospital was 16th-most-popular in 2020, up just slightly from 19th in 2019.

The top five most popular destinations were all located at parks along the Scioto River, suggesting that bike-share in Columbus was used more for recreation than essential travel.

Our analysis shows that the decisions of local governments can have a huge effect on how people return to the streets. Offering free or reduced bike-share memberships breaks down barriers to cycling as mode of transportation.

As efforts like these continue, analysing how citizens use programmes such as bike-share, or take advantage of newly enhanced bicycle infrastructure, will provide valuable insight into continued efforts to expand these types of services.

Cities around the world have already started making permanent changes to their streets to make more room for bikes, e-scooters and pedestrians.

In April 2020, Milan, Italy, announced that it would be converting 22 miles of roads into shared walking and cycling routes in response to Covid. By the end of that month, some of that infrastructure would begin to appear around the city. By 17 May, use of bike-share and e-scooters had begun to pick up there, the only forms of transportation to do so.

Proper incentives and key infrastructure adjustments can go far in ensuring that city residents can travel safely and healthily as the world works to recover amid the Covid crisis.

Topics in this article : Covid-19 , Demographics