Before March 14 of this year, Brussels had well and truly reached peak car.

Pre-coronavirus lockdown, the average driver accumulated more than 7 days per year waiting in Brussels traffic. But emergency measures brought a 42% decrease in motorized traffic, and with that came a chance for inhabitants and policymakers alike to discover the joys of cycling. It’s a story playing out on streets around the world, but it carries special significance in an unusually car-dependent European capital. 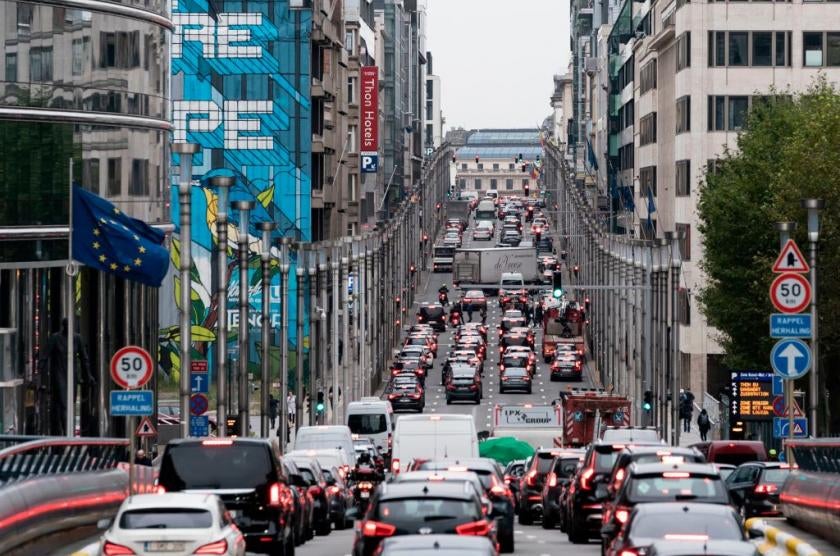 Before the coronavirus, traffic jams were a staple of Brussels’ streets. (Photo by Kenzo Tribouillard/AFP via Getty Images)

“Brussels is the capital of Belgium and Europe, yet it lags behind when it comes to mobility,” says mobility expert and author Kris Peeters. “This has been changing in recent years, largely due to pressure from civilian movements and the example set by other cities. Progress in Paris certainly influenced the French-speaking part of Brussels to step up its mobility ambitions.”

There are a few reasons why change has been slow. Under the Belgian tax system, handing out a company car is more attractive than giving a pay rise. A lack of funding for national railway service SNCB-NMBS means train transport to Brussels is often hindered by strikes. And so many Belgians, who generally prefer to live in suburbia, undertake a daily commute by company car to offices in Brussels. Those who do cycle in the capital must brave loose cobblestones and half-finished bike lanes.

The coronavirus crisis has sped up the timeline for change. Since the emergency measures went into effect, 16 Brussels municipalities have installed low-traffic zones to increase the safety and comfort of cyclists. Parking has been removed to create more road space, while speed limits on busy avenues have been lowered to 30 km/h (18 mph). To allow for social-distance walks, cars have been banned from several parks and forests, including Laeken Park and Bois de la Cambre.

“25% of journeys undertaken in Brussels are less than a kilometre, two-thirds are less than five kilometres. If we encourage journeys on foot and by bicycle, it can only be positive,” Brussels Minister of Mobility Elke Van den Brandt told local newspaper Bruzz. As the city starts moving again, Van den Brandt has decided to install 40km of new cycling paths, most of them permanent.

Among these newly bike-friendly streets is Rue de la Loi, a congestion hotspot lined with Belgian and EU governmental buildings. Reassigning one of those car lanes for cyclists marks an important symbolic change, Peeters says.

“These kinds of choices require either political courage or opportunity. The crisis presented such an opportunity,” he says. “However, politicians don’t have to wait for exceptional circumstances to make space for pedestrians and cyclists. The ‘build it and they will come’ mechanism has been proven many times over when it comes to bike use.”

To further encourage cycling, the Brussels municipality of Uccle has extended a €250 bonus to residents who purchase an electric bike. Brussels Mobility has also launched a poster campaign #BlijvenTrappen (“keep pedaling”) and temporarily offered free use of shared bicycles from the city’s Villo scheme, resulting in 7,000 new subscribers.

In the short run, biking in Brussels seems to be taking off. Bicycle shops sell faster than they can replenish their stocks. Bike shop Velofixer noted a fourfold increase in bike sales in the weeks after lockdown orders went into effect. And Swapfiets, a company that rents out bicycles for €17.50 ($20) a month, went from 1,500 to 2,500 customers in two months. In a survey among 3,130 respondents, nearly half of public transport users indicated that they plan to make more journeys by bicycle after the lockdown.

But perhaps a survey conducted in summer paints too sunny a picture. Will the people of Brussels flock back to their cars come autumn? Peeters says a lot depends on how public transport providers respond to the current challenges.

“Taking public transport and traveling by airplane pose similar health risks, yet the responses of airline companies and public transport companies couldn’t be more different,” he says. “Airline companies demand to be seen as a necessity and proactively look for ways to continue to exist. Public transport services should adopt a similar attitude, emphasizing their social value, so they won’t be downgraded to ‘transport for those who have no other choice’,” as Belgian prime minster Sophie Wilmès referred to public transport in a press conference of the National Security Council about Covid-19 measures on 6 May.

In any case, Brussels can’t handle more cars, Peeters says. Between 19 March and 3 May, a 75% drop in carbon monoxide was measured in Brussels and road traffic decreased by 90%, in comparison to data from the past 10 years. But as Belgium and Europe take steps toward reopening, car traffic is picking back up.

“Before the crisis, the city was gridlocked multiple times a day, leading to dangerous levels of air pollution. Even now that there are fewer cars on the road, air pollution levels are still too high,” he says. “With droughts and climate change looming, the city will have to be more ambitious.”

Today it’s unimaginable to citizens and tourists alike that up until 1971, Brussels’ landmark the Grand Place was used as a parking lot. Perhaps equally, in a few years’ time, we won’t believe that motorways used to cut through the city parks.

Selma Franssen is a freelance journalist based in Brussels.

Topics in this article : Congestion , Covid-19