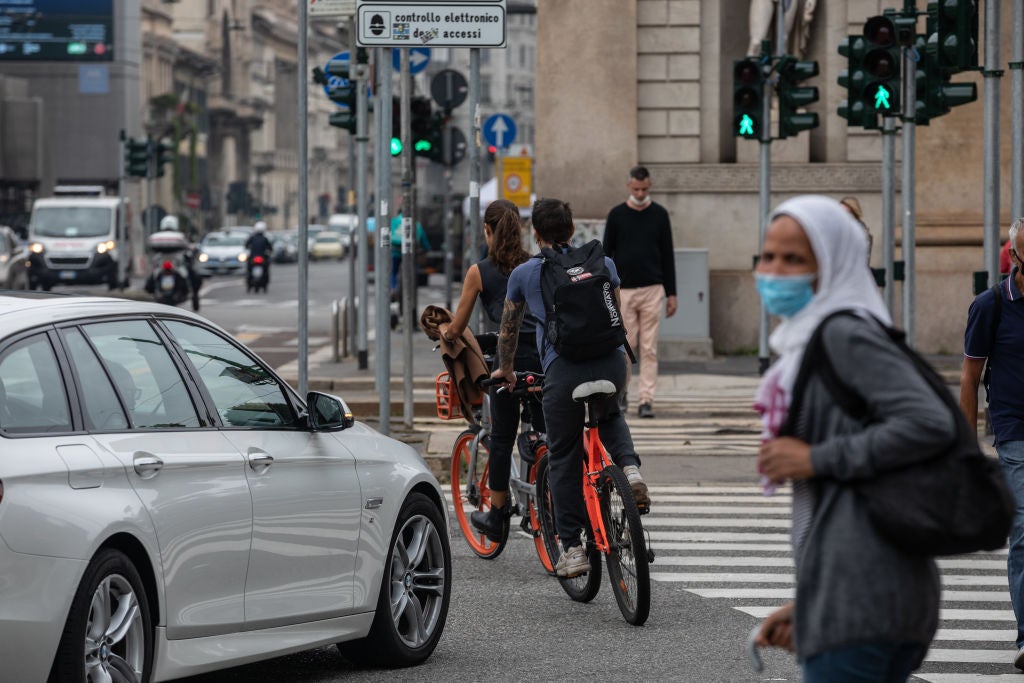 Milan authorities have added more than 35km of pop-up bike lanes and cycle paths in response to Covid-19. (Photo by Emanuele Cremaschi/Getty Images)

2020 was a year like no other in so many ways. One highly noticeable and positive change was that cities worldwide saw reduced vehicle traffic and congestion on roads.

According to TomTom, a location technology company, nearly all the 416 cities it tracks worldwide saw reductions in traffic congestion in 2020 when compared with 2019.

Every year for the past decade, TomTom has produced an annual traffic index that provides detailed congestion information on the city level. Originally, this tool was aimed exclusively at drivers to help them understand the best times to travel. Over time, TomTom analysts and visualisation specialists began configuring the index to appeal to urban planners, who need to make important decisions about how to manage road usage.

Bengaluru, India, experienced the largest reduction in traffic congestion in 2020, down 28% from 2019 levels. Many cities saw huge drops at specific times, particularly when strict Covid lockdowns were in force. In New Delhi and New York City, every day in April 2020 saw at least a 50% reduction in automobile traffic when compared with the same day in 2019. Another 274 cities saw 20-plus days with at least a 50% reduction in traffic congestion.

“The pandemic has forced cities across the globe to take emergency measures that have helped shift toward sustainable transport, avoid unnecessary travel and improve transport infrastructure and services,” writes Arturo Ardila-Gomez, lead transport economist at the World Bank. “This ‘Avoid-Shift-Improve’ paradigm is precisely what sustainable transport advocates like myself have been preaching over the last few decades to transform urban mobility.”

The pandemic has forced cities across the globe to take emergency measures that have helped shift toward sustainable transport. Arturo Ardila-Gomez, World Bank

The pandemic has allowed cities to experiment with initiatives like pop-up bike lanes, closing streets to cars to make room for pedestrians and businesses, staggering work hours for various industries and reconfiguring mass transit schedules to be more evenly distributed throughout the day.

Transportation advocates like Ardila-Gomez are hopeful that this forced decline in congestion will help city planners and officials at all levels of government realise how achievable and beneficial pivoting to more sustainable options can be.

If not, pressure on urban roads is only likely to increase. Even in the face of the pandemic, 29 cities across 14 countries saw no reprieve from traffic congestion during 2020, according to the TomTom Traffic Index. In fact, 13 of those cities experienced more congestion in 2020 than in 2019.

More congestion than ever

Taiwan has been one of the most successful countries in the world at restraining the coronavirus. According to data from Johns Hopkins, the country has had only 895 cases and seven deaths out of a population of 23.8 million.

By contrast, Turkey experienced significant difficulties in properly recording and reporting Covid-19 cases, limiting national and local ability to respond and contain. According to Reuters, the country added 1.2 million asymptomatic cases to its total count in mid-December after significant undercounting became apparent in September. Of the ten Turkish cities tracked by TomTom, three experienced traffic congestion increases and two saw no change in congestion between 2020 and 2019.

Notably, not all regions that were able to curb the spread of the virus saw congestion increases. Auckland, New Zealand, experienced a 6% decrease in average traffic congestion between 2019 and 2020. The city of nearly 1.7 million people has had only 226 reported cases and one death related to Covid.

During early Covid lockdowns between March and May 2020, Auckland officials took advantage of federal funding to widen existing cycle and footpaths and install 17km of new bike lanes across the city.

“While this had long been envisioned by city planners, temporary measures introduced in response to Covid-19 allowed Aucklanders to appreciate the potential for road space as improved commuter space for public transport, pedestrians and people on bikes, as well as public realms,” says Nahri Salim, a spokesperson for Auckland Transport.

Salim says rapid deployment of bike, pedestrian and business-centred infrastructure changes has allowed city planners to monitor the effectiveness of the modifications and garner crucial feedback from community members. Those success metrics and the community response are being used to inform the planning and design of more permanent transit and public space measures.

Auckland tracks its greenhouse gas emissions and has a variety of climate change mitigation and adaptation plans in place, including some that put climate goals at the forefront of transit and city infrastructure planning. These efforts earned the city a spot on CDP’s 2020 A List.

CDP is a global non-profit organisation that advocates for public disclosure of climate change mitigation goals and efforts on both the city and company levels. For the past three years, CDP has compiled the A List, which comprises cities that not only publicly disclose information on their efforts to curb carbon emissions but also are leaders in setting and progressing towards climate goals.

Three of the four Taiwanese cities that saw increased congestion were on the CDP 2020 A List. The fourth city, Taipei, didn’t quite make it onto the list, but it does report greenhouse gas emissions and climate change mitigation goals and efforts to CDP.

Two of the five Turkish cities that saw increased or static congestion disclose data to CDP, but neither made it onto the A List.

Though all cities are encouraged to make these disclosures, CDP specifically invites certain metropolises to disclose GHG emissions data and climate goals if they are large enough (a proxy for emissions), if they’ve been identified as environmentally vulnerable in some way by local or national organisations (for example, the US Environmental Protection Agency) or if they are a member of one of CDP’s global or regional partners (e.g., Global Covenant of Mayors, ICLEI cities, WWF, C40).

Most of the cities that saw increased or static congestion do not disclose climate change mitigation efforts to CDP.

Topics in this article : Congestion , Covid-19