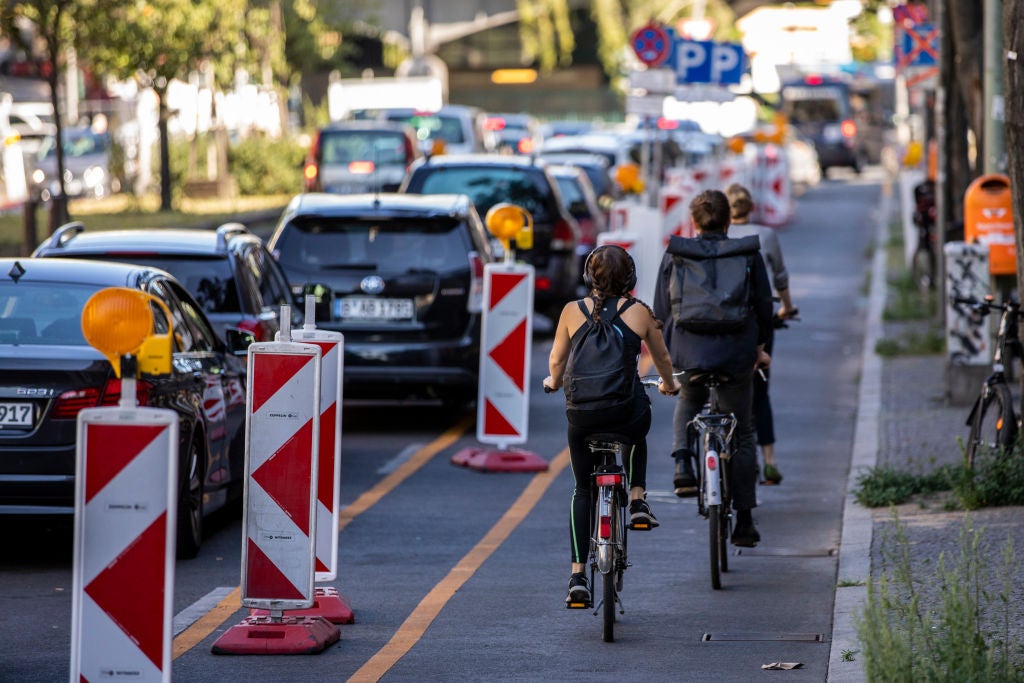 Berlin aims to make much of its 25km of “pop-up” bike infrastructure permanent. The city has seen sustained increases in ridership since the start of the pandemic. (Photo by Maja Hitij/Getty Images)

Bike riding has increased in cities around the world over the past year, while road congestion due to cars, trucks and other vehicles is down. Cities have seized on the pandemic as a chance to experiment with temporary bike lanes, closing off roads traditionally travelled by cars in favour of pedestrian and cycle traffic. Many people also suddenly find themselves with more free time to ride for exercise, leisure or errand-running.

Data from Eco Counter, a company that provides pedestrian and bicycle trip counting equipment and analysis to cities around the world, shows that weekly average bike ridership in France, Germany and the US were up 4%, 7% and 20%, respectively, when compared with the same weeks in 2019.

If those bicycle ridership numbers shock you, consider what they actually represent.

“When we’re comparing the US to a lot of the European countries, there’s differences in the way that we use bikes,” says Patrick Hogan, bicycle industry research manager for People for Bikes, an organisation that advocates for the inclusion of bikes in transportation, mobility and recreation decisions at all levels of US government.

Overall, all three countries showed increases in cycling in 2020; however, December data for France and Germany shows average weekly ridership losses of 10%, a reflection of end-of-year Covid restrictions and lockdowns in those countries.

“If [residents in European cities] are not going to the grocery store, if they’re not commuting to and from the office, then it wouldn’t surprise me to learn that ridership was decreasing slightly in those countries,” Hogan says.

France and Germany saw more mild growth, and then lockdown drop-offs, because many people in those countries already bike as a way of life.

By contrast, average weekly ridership in the US was up 23% this December, compared with last December. With gyms and team-oriented sports activities largely cancelled across the US, residents have increasingly turned to cycling as a way to be outside, get exercise, socialise at a distance and commute to essential businesses.

This prompts a key question: if the US cycling boom is built on Covid-specific circumstances, when the country returns to something like normal, will it lose the ground it gained in transitioning to a cleaner, healthier way of getting around?

To avoid this scenario, cities will need to work with community members and invest in permanent cycling infrastructure. Or, rather, they will need to start treating bike-oriented planning as a tool in the fight against emissions, rising costs associated with unhealthy lifestyles and inequalities in transport access overall.

Eco Counter data shows nationwide trends, but every city is different. Variance in Covid regulations and existing and new bike infrastructure, and even social issues, play roles in bike traffic observed at the city level.

Bike traffic data comes from permanent counter machines placed along trails and roadways that record each time a bicycle passes by. These devices are meant to provide longitudinal data so the long-term development of cycling can be studied.

Paris had the most counters installed and was the only city to install more of them throughout 2019 and 2020. At the start of 2019, 45 trackers counted the city’s cyclists. By the end of 2020, Paris had more than twice as many of these devices – 96 – spread throughout the city. Berlin has 26 counters, the latest of which were installed in early 2016. Seattle’s website says the city has 12, but there was consistent data only for seven of them.

Though this city-level data seems to conflict with the country-level statistics, it provides insight into bike policies and infrastructure roll-out in those areas.

Paris Mayor Anne Hidalgo has pushed through opposition to bring her robust bike infrastructure and policy expansion plans to life. Reducing the city’s traffic congestion and carbon footprint are major goals of the Plan Vélo. Since 2015, the city has invested €150m ($182m) and built more than 400km of bike lanes, including 30km of temporary lanes set up during Covid that the mayor has said will be made permanent post-pandemic. The city also plans to build another 600km of lanes and currently incentivises the purchase of e-bikes and cargo bicycles.

Paris saw a severe dip in ridership during the initial lockdown, then a rebound from May through November. June saw the city full of cyclists, with the highest monthly ridership increase of nearly 120%, compared with 2019. Paris experienced another drop after its second lockdown in late November.

Ambitious bike infrastructure plans, emphasis on safety and design, and commitment to public input have helped Berlin secure a spot on the Copenhagenize Index of bicycle-friendly cities. Its 2018 Mobility Act gives bike and public transit considerations priority over cars in future development plans. Berlin’s Senate Department for Environment, Transport and Climate Protection aims to convert as much of the 25km of temporary bike lanes built during Covid into permanent cycling infrastructure.

Though many are still waiting to see more miles of protected bike lanes and bike parking in the city, Berlin’s consistent ridership increase indicates that city policy decisions are working.

The German federal government also offers incentives to those who invest in cargo or “heavy duty” bikes, up to 30% of the cost of the vehicle.

While Berlin didn’t see the huge boost in ridership that Paris saw after initial lockdowns eased, it saw more stable increases. By December 2020, the city was still seeing a ridership increase of nearly 23% when compared with December 2019.

Many were hopeful for Seattle’s Master Bike Plan when it was released in June 2019. However, Mayor Jenny Durkan has come under criticism for her watered-down approach to implementing some parts of it, namely the installation of several planned bike lanes. Community input has been a priority of the plan from the beginning, but in some cases opposition to bike infrastructure may have allowed the administration to lose sight of its overall transit and climate mitigation goals.

Seattle also plans to make some of its temporary, Covid-era bike paths permanent, though it appears it might be using money already allocated to other city bike projects to make it happen.

While other federal governments stepped up before and during Covid to subsidise and incentivise cycling, in the US the Trump administration cut commuter subsidies, including a $20-per-month bike-to-work incentive.

After initial lockdowns in March, Seattle never recovered its full ridership from 2019. The last month of data available for Seattle was November 2020, which showed the city still at a 52% decline in ridership.

It is possible that the limited number of counters underestimated the positive impacts Covid has had on ridership in Seattle. The devices that did offer reliable data were mainly along major commuting lines. However, Seattle’s relatively small number of counters can also be seen as a policy decision, one that does not prioritise getting accurate counts of how many cyclists are engaging with the city and where.

A new interest in bike riding

After the Paris transit strikes in early December 2019, citizens overwhelmingly turned to bikes to get around. Le Parisien reported that even after the strike ended, ridership remained over 130% higher than the year before.

According to recently published People for Bikes US survey results, 87% of new bike riders – defined as people who, during Covid, rode a bike for the first time ever or in one or more years – said that they will continue to ride.

That percentage may be high (people’s optimism for exercise and new routines does not always line up with reality a few months down the line) but if given the right incentives and street structure, many may actually continue.

According to People for Bikes, new riders say they perceive fewer barriers to riding than existing bicyclists or those who used bikes for recreation or transport before Covid. This is a positive for a city like Paris, with ample infrastructure to support riders and keep them bicycling safely.

But in cities with fewer bike lanes and weaker policies, it is potentially worrying since the roads that new riders are experiencing are vastly different from the norm.

“Since April, May, June, a lot of these new participants have only known streets that aren’t bustling with cars and with folks driving to and from work and this sort of thing,” Hogan points out.

Cities across the US have set up temporary bike lanes and sometimes closed whole streets to enable residents to get out of their houses more easily. Cycling has been a preferred mode of transit as fears surrounding the safety of mass transit have persisted.

When daily commutes start picking back up, when restaurants start serving indoors, when it’s finally safe to visit out-of-town relatives, cities that do not invest in sustainable, permanent bike infrastructure stand to lose whatever gains they’ve seen during the pandemic.

Cycling as a holistic tool for cities

Thoughtful, community-involved planning, coupled with strong decision-making, is a key takeaway from Paris and Berlin. There are success stories in the US, as well.

New Orleans recently began a project that aims to build bike lanes and improve connectivity in 11 corridors throughout the city. The project has been built around several rounds of community involvement and feedback, with transit equity and safety as major goals. Covid delayed construction, but by the end of December the Algiers neighbourhood, a high-poverty, predominantly black, traditionally neglected part of the city, had protected bike lanes.

“Building support within the community and having buy-in from the members of that community does generate success, and that lack of buy-in does kind of generate a lack of success,” says Hogan.

In the early days of the pandemic, everything happened so fast, with city planners and officials scrambling to rapidly provide support in many different areas, from threatened housing to lost income and revenue. Having a robust and inclusive community discussion on bike infrastructure was not necessarily at the top of any mayor’s list of priorities.

According to People for Bikes, “only 58% of cities engaged in a public-input process before the implementation of any measures, temporary or permanent, and few cities relied on any official planning documents or emergency-preparedness policies to guide decision-makers on the appropriate actions to take”.

As a result, cities have been able to complete on average only 66% of the bike projects they’ve publicly committed to during Covid.

Moving forward, Hogan says planners and city officials need to consider bicycles a multifaceted tool that can be used to address a wide array of challenges. Bikes can solve city transportation concerns like first and last-mile trip completion, lack of transportation options in high-poverty areas and congestion reduction. They can also assist the environment by improving air quality and reducing greenhouse gas emissions. Additionally, cycling can help mitigate the rising costs of unhealthy lifestyles, both physical and mental.

Topics in this article : Roads