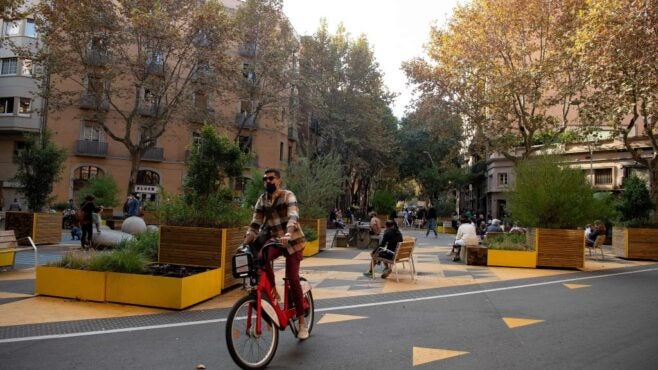 A man rides a bicycle in a pedestrian area as part of an expansion of the “superblock” plan promoting cycling and car-free zones in Barcelona. (Photo by Josep Lago/AFP via Getty Images)

When the Covid-19 pandemic hit Barcelona hard in March, the need for space – both private and public – became more urgent than ever.

While no place was prepared for what the pandemic would bring, Barcelona Mayor Ada Colau contends that her administration’s ongoing efforts to create affordable housing and build a more liveable city allowed it to adapt quickly to the needs of such an unprecedented moment.

“This pandemic has put us to the test. The great challenges and problems we had before the crisis are even more visible,” Colau said 17 November during the virtual Smart City Live 2020 conference. (City Monitor is an official media partner of Smart City Live 2020 and Tomorrow.City.) “This pandemic has made us lock ourselves in our homes for a long time, but some people don’t have a home,” she said. “So that’s where you see the vulnerability for the whole city to not have sufficient accessible housing.”

A central mission of Colau’s administration has been to increase the city’s housing supply, in particular by strictly regulating short-term tourist apartment rentals and unoccupied investment properties. Barcelona in recent years has pressured the owners of empty, privately owned flats in an attempt to open up more long-term housing for locals. With the onset of the pandemic, the government looked there to find homes for people who needed them in an emergency: the city has rented vacant flats from owners to be used as low-income housing, and in July it warned corporate landlords that it would use its power to seize apartments if they continued to sit empty.

Barcelona’s notable public space initiatives have also been adapted to accommodate residents’ needs during the pandemic. The city was already striving to reduce the carbon emissions as well as the outsize footprint of cars, which Colau said account for 20% of all transportation but take up 60% of public space. The most well known of these efforts was the creation of Barcelona’s “superblocks,” which restrict the movement of vehicles to certain city streets, turning over the land within these enclosed areas to pedestrians and reducing vehicle emissions in the process.

Superblocks have seen much success since they were rolled out at a significant scale in 2016. More people enjoy the company of their neighbours in informal park spaces, and the number of local businesses has increased, according to the Guardian. One study from the Barcelona Institute for Global Health predicted that the reduced air pollution resulting from superblocks could save 667 lives per year. The city recently announced a major expansion of the program – instead of the one-off instances of such areas it has created in various neighbourhoods around the city so far, it plans to turn the entire central district of Eixample into one superblock over the next decade. Colau has called it a “leap in the ladder”.

“In the beginning, when we launched this, as always, there was controversy, debate, people were sceptical, they thought it would be bad for the economy,” Colau said. “And on the contrary, it’s been a good thing. It adds quality public space. It decreases pollution and noise, and it’s good for the economy.”

Expanding on this reclamation of space in response to the coronavirus, the city has also created more bike lanes and turned over street space to bars and cafes for outdoor seating. In all, Colau said, the city has recovered some 30,000 square metres of public space from cars. Reshaping public spaces for such considerations as social distancing and the safe continuation of businesses fits in with existing goals to make Barcelona more liveable for the people who call it home.