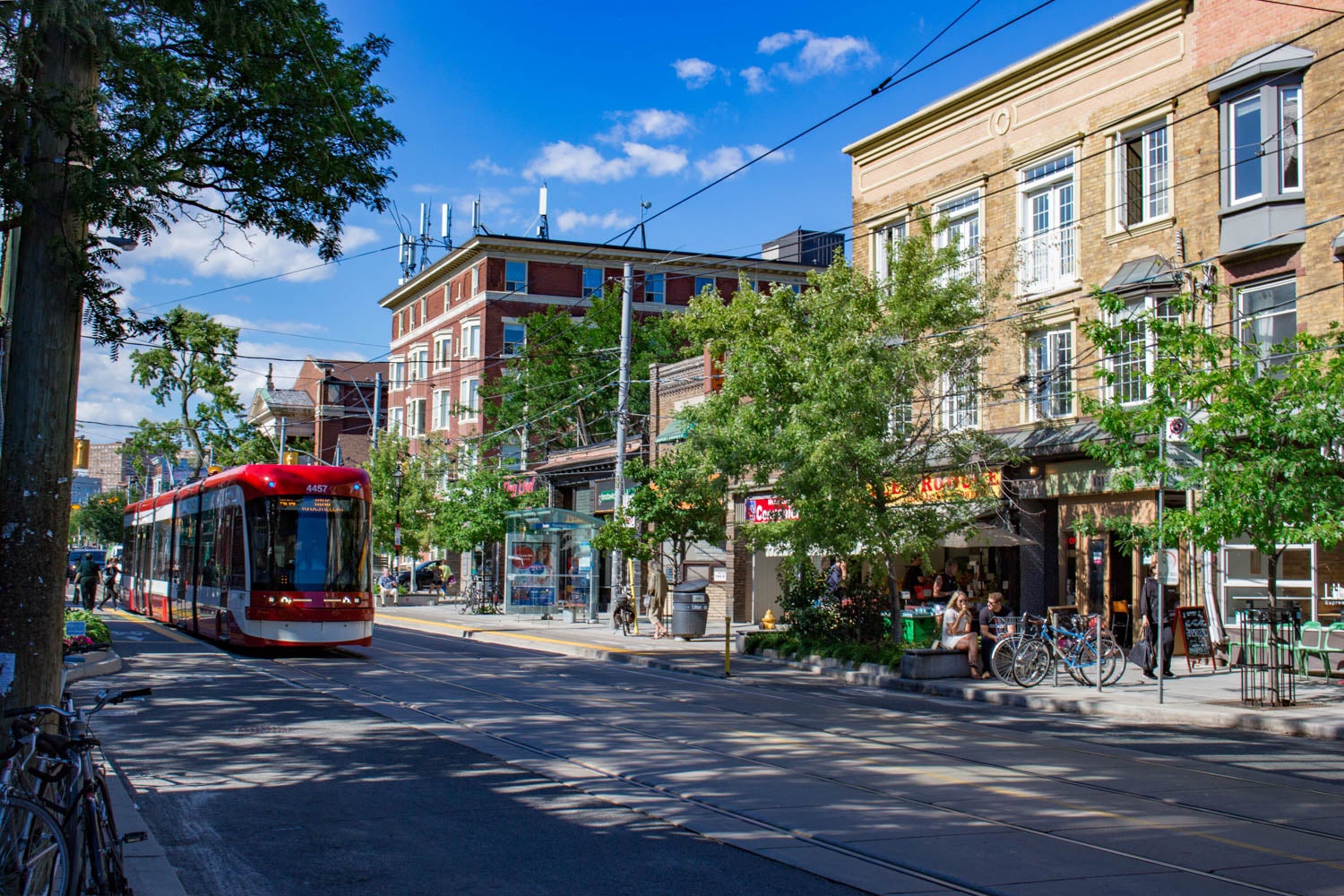 Residents of Toronto’s upscale Roncesvalles neighbourhood in the city’s West End got a shock in late November when they found local businesses along the lively main street draped in ‘for lease’ signs.

The window wraps were part of a campaign by the Roncesvalles Village Business Improvement Area (BIA) to encourage Torontonians to shop locally over the holiday season. The pandemic has been a significant stressor on small-business owners along the neighbourhood’s main street as well as across the city, says Adam Langley, a director at the BIA and the owner of the Solarski and Welcome Guardian pharmacies.

“[Earlier this year] everyone seemed to think, ‘I’ve got months.’ And now as we go further along, we’re hearing from business owners that they’re down to weeks – and in some cases, days,” Langley says, adding that to date, the neighbourhood has lost about ten local businesses. Meanwhile, big chains like Walmart, Joe Fresh and Costco remain open.

Seeing the impact the pandemic is having on Toronto’s small businesses, city councillors Kristyn Wong-Tam and Mike Layton are reviving efforts to develop a chain retail strategy for the city that would encourage landlords and developers to take on varied types of retailers and ensure that any new chains complemented a neighbourhood’s character. In a motion put forward at a late-October council meeting, they noted the “character and vibrancy” of many Toronto neighbourhoods was changing prior to the pandemic as longtime local businesses were “pushed out” by larger chain establishments, a trend that is being hastened by the coronavirus. The councillors had put forward a similar motion in 2017, but work on it stalled in the intervening years. Developing a chain retail strategy now, they wrote, could be a helpful part of the pandemic recovery.

“Toronto is made up of old main streets, and the second you start to change the fabric of that main street, it becomes a less appealing environment for not only people visiting but for local residents,” says Layton. He noted that while having multiple nearby chains may be convenient for residents, they can “start to suck some of the economic activity out of those smaller businesses, which means they might not be viable anymore”.

According to Toronto’s 2018 employment survey, independent businesses represent 74% per cent of all traditional retail establishments, and 32% per cent of employment in that sector. Layton says he hopes to pilot a chain retail strategy in the city’s Kensington Market neighbourhood, where chains make up just 15% of food retail and service establishments and 2.6% of non-food retail concerns. Residents have pushed back against any chain retail intrusion.

“There’s so much value to having diversity and a lot of independent businesses on our streets,” says Ariana Holt, senior planner for the Canadian Urban Institute, including supporting local supply chains as well as providing entrepreneurship opportunities for the city’s newcomers. “The scary thing about the chains is that they put all this pressure on small businesses and there’s these economic advantages [they] have that make it difficult for smaller businesses to compete.”

She says any strategy should be customised to the needs of each neighbourhood rather than applied as a blanket regulation.

If Wong-Tam and Layton are successful, Toronto will join a collection of cities and small towns that have implemented controls on chain retail, including Jersey City, New Jersey; Nantucket, Massachusetts; Fairfield, Connecticut; Fredericksburg, Texas; and San Francisco. While their aims are similar, these cities have taken different approaches, from blanket bans on some or all chain stores to forcing formula retailers to go through a more extensive permitting process, or targeting big-box stores specifically.

Urban-planning experts agree such ordinances can be effective tools for sustaining the character of local neighbourhoods, but they often come with unintended consequences. “Anything that puts restrictions in place ultimately has trade-offs, and I think they often have a shelf life,” says Dena Belzer, president of Strategic Economics, a San Francisco-based urban-economics consulting company.

The consultancy conducted a 2014 economic analysis of San Francisco’s formula retail controls, which were expanded in 2007 by a proposition to require conditional-use authorisation for retailers with 11 or more stores in all of the city’s commercial districts and to outright ban chains in the Hayes Valley and North Beach neighbourhoods. The analysis found that chain retail accounted for 12% of San Francisco’s retailers, compared with the 32% nationwide average.

The controls have succeeded in preserving local neighbourhood character, says Emily Abraham, public-policy manager at the San Francisco Chamber of Commerce. Trendy Hayes Valley, which has a collection of unique local businesses, is a good example. “When we were having more tourists in the city [before the pandemic], they’d come to this specific location because you’re not just going to get your department clothing store or things like that. I think it really does [ensure] every neighbourhood is unique, it’s supporting innovation, and [retailers are] not going to be bought out by a big chain.” 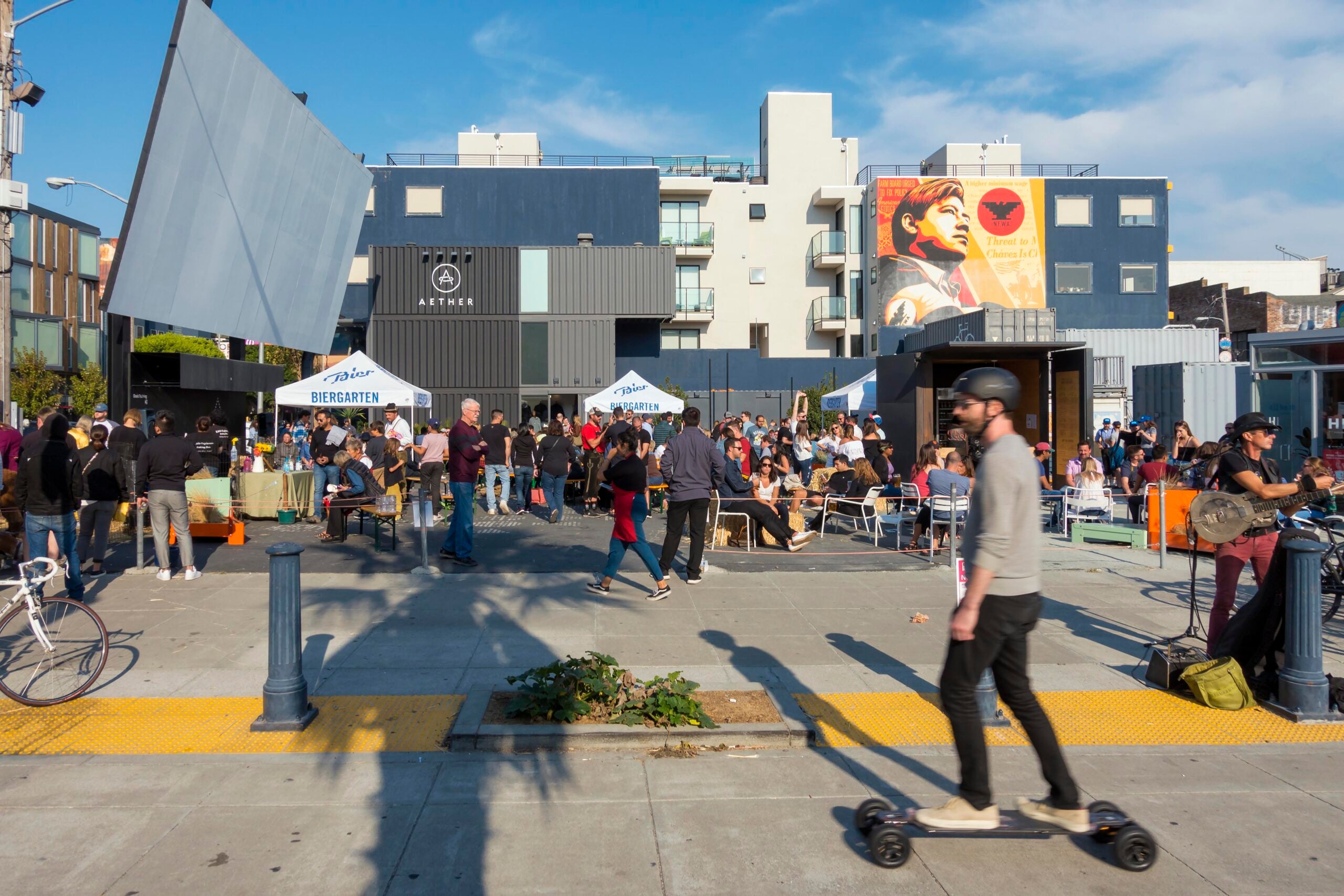 Since 2004, San Francisco’s Hayes Valley neighbourhood (seen here pre-pandemic) has had a policy in place to ban chain stores with more than 11 outlets. But many chains have managed to find loopholes. (Photo by Sergio Ruiz)

But there are downsides. Chains can provide neighbourhood-serving retail such as grocery stores and pharmacies, and the months-long conditional-use permit process can make it more difficult for neighbourhoods to get the goods and services they need. Hayes Valley, which previously didn’t have a full-service grocer and spent nearly a decade searching for an independent option, was forced to ask for an exemption to its own ban in 2017 to allow New Season Market to set up shop. (The grocer ended up cancelling its lease in 2018, however.)

The restrictions challenge neighbourhoods that are struggling to receive investment, where chains are often the only businesses willing to take the financial risk. They also don’t differentiate home-grown success stories from national or international chains, hindering their growth once they reach 11 locations. “Even if you went to [a limit] of 15 or 20 stores, you’re still not going to get a Starbucks on every corner,” Abraham says. “I think it takes a little bit of forethought if you’re trying to breed that small-business innovation. Once you’ve created a successful business in your city – and successful probably means they have more than 11 locations – how do you then go and support them?”

Vermont took a different approach, with a state law that gave regional environmental commissions the ability to deny building permits for big projects, which effectively barred many big-box stores in the state. But it didn’t account for Dollar General outlets, which have proliferated there since 2006 – their slightly smaller format squeaks under the legislation as written.

The tiny wine country town of Calistoga, California, on the other hand, hasn’t seen negative impacts from its formula retail ordinance, which outright bans chain restaurants and hotels and requires permits for all other chains. The 1995 ordinance emerged out of a desire to protect local businesses and Calistoga’s uniqueness as a Napa Valley tourist destination when chains were starting to proliferate, says Zach Tusinger, the city’s planning and building director. Today, the town’s historic downtown is a mix of wine-tasting rooms, high-end restaurants and a smattering of local businesses.

A chain retail strategy could be useful for Toronto, Holt says, despite the potential trade-offs involved. But it shouldn’t be the only approach to supporting small businesses after the pandemic.

The Canadian Urban Institute recently released a report on how to support main streets during and after the pandemic, with numerous policy suggestions. They include reviewing how tax policy treats vacant spaces to ensure it doesn’t deter landlords from renting to new businesses; relaxing zoning to allow for a larger diversity of uses; and publishing a design manual to ensure the retail space in new developments is appropriate for small businesses, something Toronto has recently done. A separate report, from the San Francisco Bay Area-based urban planning think tank SPUR, suggested a series of legislative solutions to the small-business rent crisis such as commercial eviction moratoriums, providing longer payment deferrals for utilities and creating the equivalent of bankruptcy court for commercial tenants to allow for administrative remedies rather than eviction.

“The pandemic is exasperating the need for addressing this issue,” Holt says. “Landlords are becoming more nervous about who they lease their spaces to, and they’re probably more likely to turn to chain retail. And there’s a lot of new vacancies that will be on our main streets as a result of the pandemic. There’s a lot of turnover happening, and the possibility is that they’ll all turn to chains.”

Kelsey Rolfe is a Toronto-based freelance reporter and editor.

Kelsey Rolfe is a Toronto-based freelance reporter and editor.
Websites in our network