When the Covid-19 pandemic set in this spring, familiar scenes from cities around the world changed seemingly overnight. 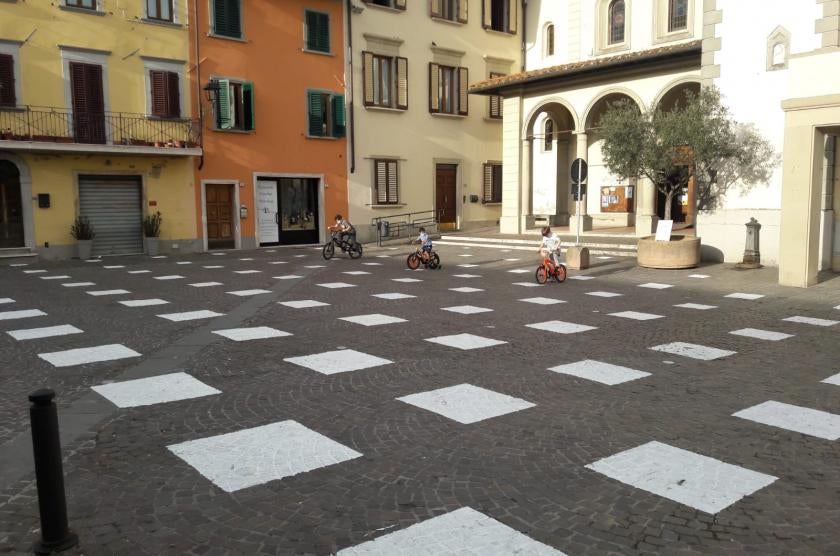 Squares indicate where people can stand to keep distance in a public square. (Photo by Francesco Noferini, courtesy of Caret Studio)

Eventually, people did begin to venture outside again, and in some parts of the world a new normal seems to be taking shape already. Still, the ongoing challenge of social distancing means common spaces such as parks, plazas, markets and restaurants are all experimenting with ideas that keep people safe as they search for some semblance of city life as it used to be.

Often this is a challenge to be met with smart design that communicates the ways that rules, expectations or even purposes of a space have changed. As streets are re-imagined, restaurants spill out their front doors and signs tell people how to behave everywhere they go, here are some simple and effective initiatives helping people navigate public spaces in a changed world which can serve as models for city leaders just about anywhere.

Paint social-distancing grids on the ground

An artful grid in the Piazza Giotto in Vicchio, Italy, encourages visitors to keep their distance. (Photo by Francesco Noferini, courtesy of Caret Studio)

As cities locked down, the ground became a canvas for social-distancing guidelines. Tape, chalk, stickers and stencils offered quick, low-tech ways to communicate what a safe distance looks like anywhere and everywhere.

In the town of Vicchio, Italy, Piazza Giotto was transformed with a grid layout of white squares painted on the cobblestones, each of them 1.8m apart. Named StoDistante (Italian for “I’m keeping my distance”), the installation was designed by the Italian architecture firm Caret Studio.

Re-imagine parking spaces for other uses

In the sudden scramble to find more space for people, an old urbanist mantra gained mainstream traction: take it away from cars. What’s even more surprising is that this is happening in a city as dependent on cars as Dallas.

In early May, the non-profit organisation Better Block turned a parking space into a “parklet”, a tiny, temporary park in the city’s Arts Bishop District. Occupying an empty parking space, the parklet – a simple, timber-clad deck with a built-in bench – allows the restaurant that maintains it to provide outdoor seating without taking over the sidewalk. The result is a stylish and functional use of public space akin to the popular street-side terraces of Montreal.

The city of Dallas has since launched a temporary parklet program to assist local businesses aiming to do the same thing to assist their economic recovery. Crucially, parklets aren’t just about restaurant seating: they’ve been used for myriad other functions, including micro-playgrounds, an outdoor art show, a bike rack and even an outdoor library.

Bogotá has long used pop-up infrastructure to encourage cycling, a behaviour that made it easy to find new space this year. (Photo by Raul Arboled/AFP via Getty Images)

Pop-up bike lanes have become a favoured tool for getting people to reconsider their streets. From Washington, DC, to Paris to Sydney, road space is being re-allocated to support growing cycling populations and promote a safer ecosystem for a healthy and sustainable mode of transportation.

Bogotá was a clear leader in this movement. The Colombian capital was one of the first cities to introduce pop-up infrastructure, and it has turned to that tool again in this emergency. Since the pandemic began, Bogotá has added 80km of emergency bike lanes, bringing the city’s cycle network to over 600km. In the country’s effort to fight the pandemic, as well as to improve the air quality of a city often choked by pollution, these temporary bike lanes will become permanent – and speed limits will be lowered citywide. It’s a fitting adaptation for a city shaped by Ciclovía, the government-run program that turns 120km of streets in a bicycle superhighway every Sunday, from 7am to 2pm.

A man washes his hands at a mobile sink in an Atlanta park. (Photo courtesy of Love Beyond Walls)

Homeless people have been especially vulnerable through the Covid-19 crisis. Many public-health recommendations – sheltering in place, avoiding others and washing hands with soap – haven’t been easy options for people living on the streets.

Atlanta-based Love Beyond Walls, the US nonprofit organisation that launched the country’s first museum representing homelessness, has set out to help communities install mobile hand-washing stations in their neighbourhoods. Together with Lavamaex, a California-based non-profit, Love Beyond Walls launched the #LoveSinksIn campaign, which has already reached 30 cities, including New Orleans, Baltimore, Detroit, and Columbus, Ohio.

“Social distancing doesn’t mean social disregard,” the campaign declares. Woodruff Park, in downtown Atlanta, was one of the first public spaces to receive portable sinks. (In a bid to help its large homeless population find work or search for social services, the park also became a free wi-fi hotspot in 2018.)

Murals fill a space with easy reminders of how to stay a safe distance from others, even when stopping to chat. (Photo courtesy of Tactical Urbanistas)

Another city-making principle that’s proving its worth in the pandemic: a little paint goes a long way. In London, a self-organised group of women called Tactical Urbanistas have taken it upon themselves to reclaim the streets with quick and colourful interventions.

To help enforce social distancing and inject an element of play into the public realm, the team painted colourful murals on sidewalks that appear to be crawling up brick walls and swallowing benches. Playful though they may seem, these patterns, which look like mini topographical maps pulled out of a children’s book, have a layer of functionality, too. The black dots at the centre of each blob are 2m apart – ideal for a socially distant chat with friends and neighbours.

Yellow tape effectively extends the boundary of each table, indicating to others to keep their distance from diners. (Photo courtesy of Hua Hua Architects)

In the Czech Republic, local firm Hua Hua Architects has developed a space grid initiative that reconciles the public realm with al fresco dining. The Gastro Safe Zone initiative, which launched in March, aims to transform city squares into safe and defined zones for outdoor dining – a bit like a regulated, open-air food court.

Every zone is surrounded by a circle of tape, with a non-movable, one-piece dining set in the middle, akin to a metal picnic table. The first prototype has already been installed in the streets of Brno, where a confirmed pilot program will soon convert the city’s public squares into Gastro Safe Zones. The architects have also launched a furniture brand named Stoolky, which offers dining sets in different colours and a varying number of seats. After Covid-19, the furniture can be reused in parks, playgrounds or as street furniture.

Use street space for touch-free play

Play NYC will focus its efforts on areas where youth programs have been particularly lacking. (Photo courtesy of Street Lab)

Play streets are a long-standing tradition in New York City, where communities temporarily ban cars so people can safely play in the streets. But the pandemic has put them at risk.

Street Lab, a nonprofit organisation that creates programs for public spaces across New York City, is launching a program to support safe, hands-free play for children in high-need neighbourhoods. Titled Play NYC, the program rolled out its first installation on an open street in the Red Hook neighbourhood and will focus on areas where youth programs have been particularly lacking.

The street furniture setup, designed in collaboration with industrial designer Hannah Berkin-Harper, includes a range of colourful barriers and custom-designed benches that are hand-deployable and easy to disinfect. The socially distanced zones will serve as a safe backdrop for story hours, street games, physical activities like obstacle courses and learning experiences.

Elissaveta M. Brandon is a writer based in New York City.