Melbourne, Australia, has experienced some of the strictest Covid-19 lockdowns in the world. 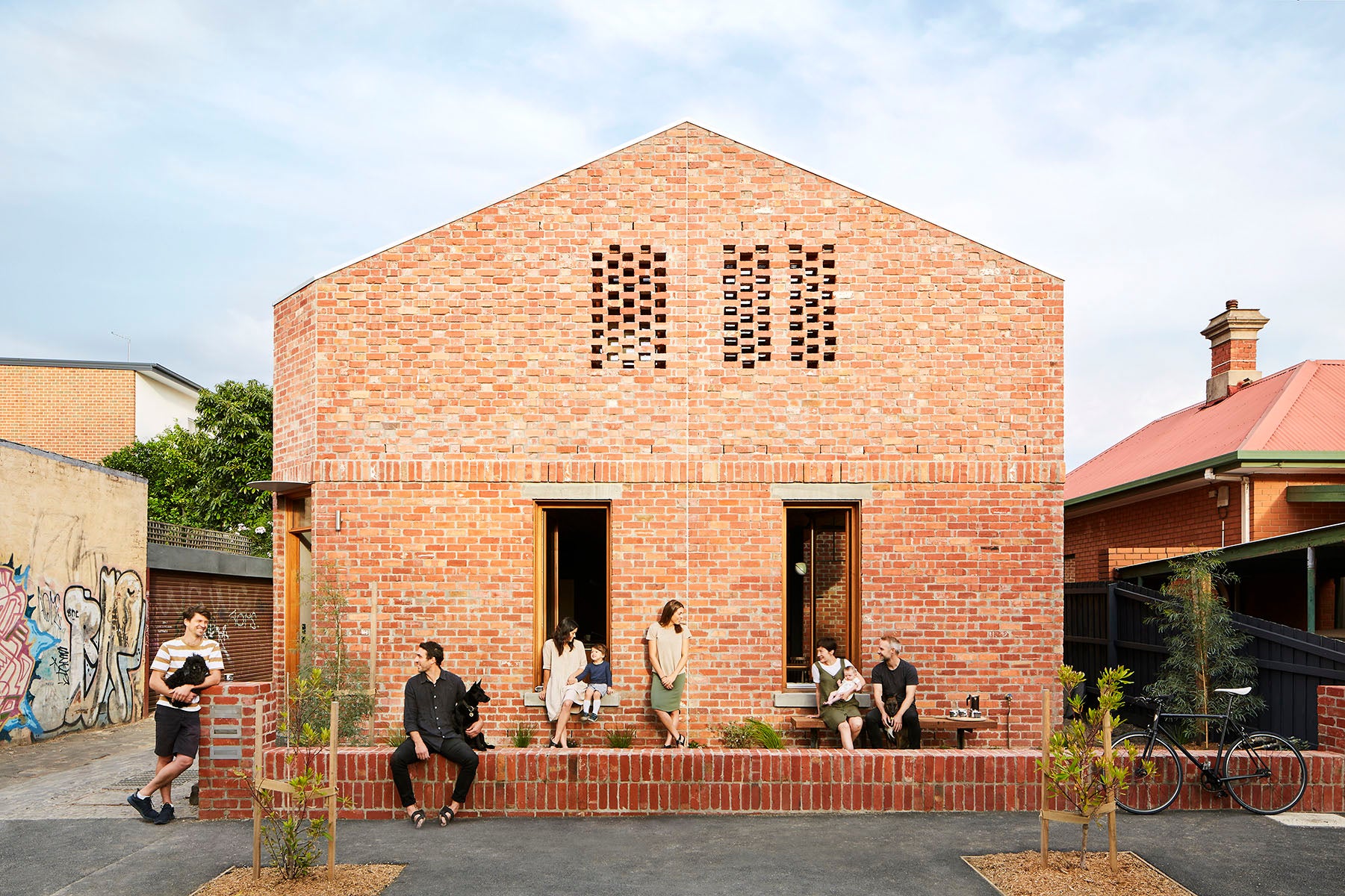 The planning process for this new collaborative-housing model, which accommodates three families in a former single-family dwelling, was complicated and expensive. (Photo by Tess Kelly)

Spending increased time at home during this period has focused Melburnians’ attention on where they live. The suburbs have been praised for providing a safe haven in self-isolation, but not all of them are created with equal access to green spaces and essential services: a recent study found that 340,000 Melburnians have little or no parkland within 5km of their homes.

So who has access to the well-connected inner and middle-ring suburbs, and who is kept out?

It is estimated that Australia will need to build an extra 50,000 new houses per year for a decade to meet the projected population growth of around 20 million people by 2056. While population forecasts imagined a pre-Covid-19 world, it is unlikely that the overall demand for accessible housing will radically deviate over the coming decades. A moderate increase in density throughout the inner and middle-ring suburbs of Australia’s major cities is required to meet the housing needs of a growing population while avoiding the negative impacts of urban sprawl.

Accordingly, an increase in density in transit-rich locations – close to jobs and community amenities – is in line with the purposes of Plan Melbourne, the city’s strategic-planning policy, and is reflected in the guidelines of local councils. But to boost accessible-housing supply and radically reimagine how Australian cities can better meet the needs of the community, it is time to reform some of the most obstructive elements of the urban-planning system. “Neighbourhood character” is one such snafu.

The concept of “neighbourhood character” emerged in Melbourne in the 1990s as rationale for the preservation of heritage architecture and proceeded to assume a life of its own through the well-publicised “Save Our Suburbs” campaigns in the 2000s. Similar policies exist in urban areas across the US: at best, they enforce aesthetic conformity under homeowners’ associations, and at worst, they serve to entrench social exclusion via single-family zoning. Neighbourhood character assessments inform planning policies in the UK and fuel “not in my backyard” (Nimby) movements around the world.

Fundamentally subjective, the assessment often conflicts with the city’s overarching policy objectives and provides broad grounds for third-party appeals in administrative tribunals. The rights concerning third-party appeals on planning application assessment criteria are particularity idiosyncratic to Victoria, which had nearly six times the number of planning appeals as any other jurisdiction in Australia between 2009 and 2010, according to a Productivity Commission study in 2011.

The policy impacts the urban development of around 40% of Melbourne’s growth boundary. However, according to architectural academics Kim Dovey, Ian Woodcock and Stephen Wood, it actively works to undermine the city’s need for new housing and remains a “highly problematic tool for performance-based urban planning.”

What is really being protected?

This poses the question: in asserting a need to preserve neighbourhood character, what are we really trying to protect? When existing character is the de facto preference, it restricts new housing to serve a defunct social model that emerged primarily to support the suburban nuclear family.

The character of neighbourhoods is not static, just as the communities they attempt to define are not, either. The neighbourhood character policy institutionalises social homogeneity into the housing market and administrative tribunals at the expense of innovations in housing typologies and environmentally sustainable design. According to Dovey, Woodcock and Wood, “the politics of enforcing all new development to fit with an image of an idealised past leads to a repression of differences,” where perceived “inappropriate development” can be used as a tool for social exclusion.

Neighbourhood character not only denies the true origin of Melbourne’s neighbourhoods, it ignores acknowledgment of the indigenous owners of the land and instead seeks to establish an echo chamber of neocolonial ideology that stifles creative design and restricts housing innovation.

Melbourne’s current urban reality is characterised by the dual crises of a lack of affordable housing and the need to adapt to the increasing effects of climate change. Defining and enforcing neighbourhood character in isolation in this context is of no value and is a destructive force that undermines the strategic goals of Melbourne’s sustainable evolution. 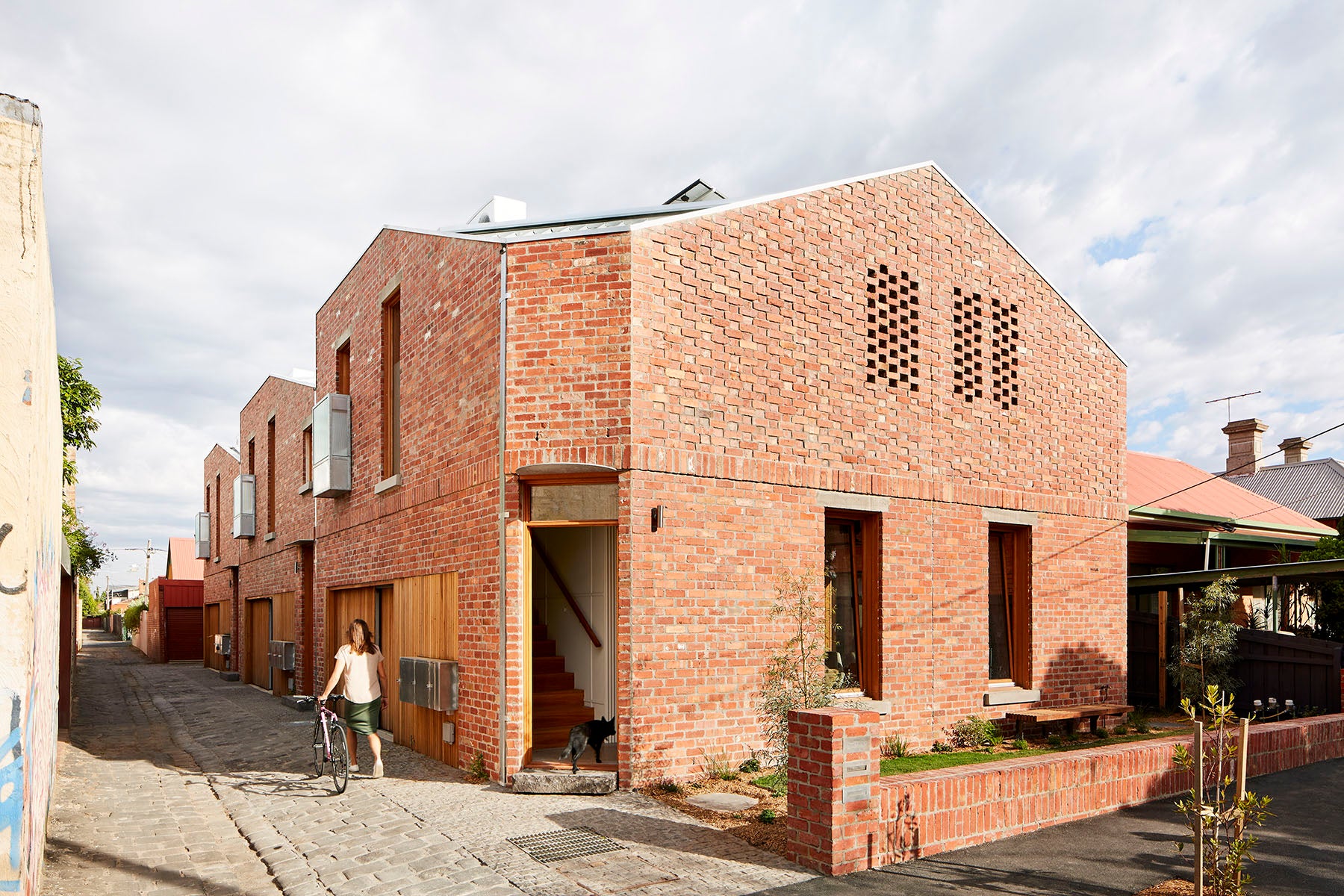 Located in a walkable Melbourne neighbourhood, this three-family home is powered by 100% renewable energy. (Photo by Tess Kelly)

Compact, walkable density is necessary to provide more-accessible housing for those priced out of inner and middle-ring suburbs, yet it requires a significant departure from the status quo.

In 2016, the Davison Collaborative, a new housing model, brought together three couples, two children and three dogs to transform one postwar suburban single-family dwelling in the inner Melbourne suburb of Brunswick into three family homes powered by 100% renewable energy. Designed by the architectural practice Archier and realised under a collaborative development model developed by HIP V. HYPE, the project allowed for the collaborators to pool their financial resources to break down the barriers of high property prices in this well-connected inner-city area.

Projects like the Davison Collaborative could provide a supply of new and diverse housing choices in an existing urban area. Its site-responsive architecture and environmentally sustainable design realised the Plan Melbourne outcomes of creating a distinctive, liveable, sustainable and resilient city.

The path to completion was not easy. The Davison Collaborative had to appeal the local council’s decision to refuse the planning permit application at the Victorian Civil and Administrative Tribunal before being granted a permit. In all, the application went through over 12 months of planning and incurred over $25,000 in legal and associated fees.

In a transit-rich precinct not constrained by heritage overlays, it should be reasonably anticipated that incremental increases in density are of appropriate character and should be supported. “Opportunities for change should be seen as at the upper end of transformational expectations within the zone,” suggested the expert testimony from Rob McGauran, director of MGS Architects.

If Australian cities are to meet the objectives to responsibly densify the middle ring at a rate that keeps step with and anticipates population growth, it is counterproductive for a neighbourhood character assessment and appeals process to hamper, impede and artificially inflate the cost of new housing to obtain planning approval. Consideration must be given to a neighbourhood’s overall capacity to support a moderate increase in density, and the demand for it must be anticipated and accommodated accordingly.

This scenario is not unique to Melbourne. There are growing calls in cities across the US for similar planning policy reform to accommodate moderate increases in density. The abolition of single-family zoning in Minneapolis in 2019, for example, was a turning point for bold city action that supports the development of more-accessible housing and, in turn, more-inclusive communities.

Communities have a valued role in determining the future shape of our cities, but ironically, neighbourhood character policies shift the final decisions of what shapes our streets away from the local community and into the hands of existing residents and the legal profession.

Local communities are justified in their mistrust for new development, which is often built to minimum construction and sustainability standards. The rapid development of lacklustre apartment buildings in Brunswick over the last ten years is evidence of this. The provision for third-party appeals on neighbourhood character grounds is intended to curb poor-quality development, yet it is not analogous to equitable community participation.

Urbanism academics Elizabeth Jean Taylor, Nicole Cook and Joe Hurley have found a strong correlation between household wealth and the rate of third-party appeals, where the wealthy seek to block increases in density in well-connected and well-resourced areas to avoid perceived risks to their property values. The provision for third-party objections to planning applications often serves to entrench the vested interests of well-resourced existing residents rather than to uphold any notion of building sustainable cities. These appeals rarely achieve genuine community participation in determining the form of our suburbs; rather, it is a process that can serve to exacerbate social inequality and result in compromised built-form outcomes.

Removing third-party appeals and introducing strategic precinct plans would go a significant way toward rectifying the ineffectiveness of the current system. Participatory planning can engage community discourse in the long view and seek to better align community expectations with strategic state plans. Asking questions such as “who are our cities for?” and “what kind of city do we want in 50 or 100 years’ time?” can lead to a more holistic approach. By incorporating community contributions within the planning objectives at a precinct level, proposals that are compliant with those objectives would require a building permit only at a site level – increasing the efficiency and consistency of the process. A greater emphasis on performance-based sustainability assessments in the planning application process and state building regulations would also provide a more effective mechanism to materially improve the quality of new medium-density housing and provide for the long-term sustainability of Australian cities.

Victoria needs to reframe its planning approvals process away from looking at the past for answers to its current and future challenges. Projects such as the Davison Collaborative should be incentivised by the planning system, not forced to fight for approval. And Melbourne’s planning scheme needs to move away from privileging existing character toward prioritising one that is sensitive to urban-change management and looks at the highest-efficiency land use to meet the challenges of Australia’s national accessible-housing crisis.

Laura Phillips is an urbanist, lawyer and advocate for accessible, environmentally sustainable housing and the sustainable growth of Australian cities.