A new report by HOPE not hate reveals positive attitudes towards immigration and diversity in a great many places, and a general desire that the country should be welcoming and tolerant. 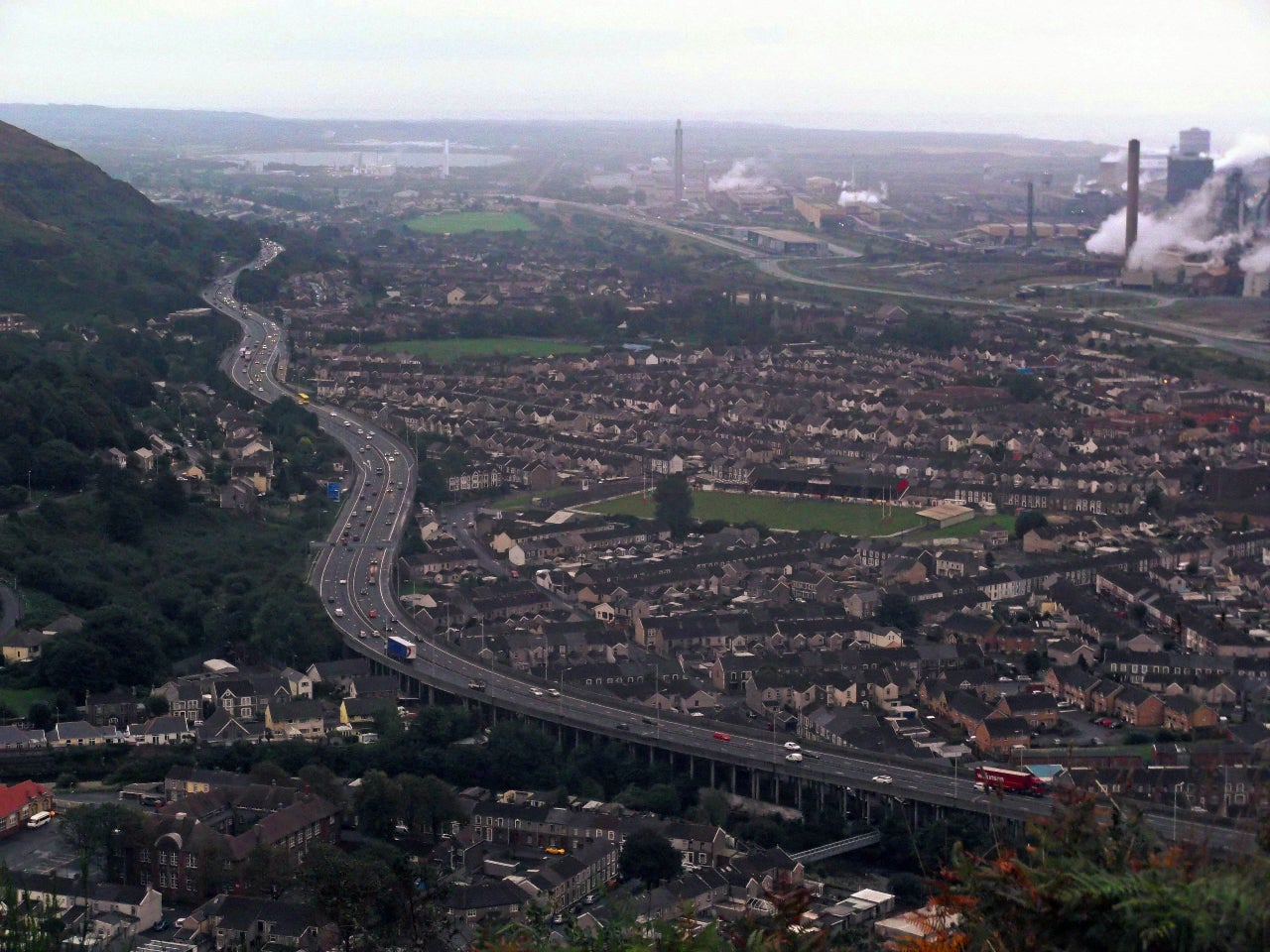 Wales’ laudable aspiration to become the world’s first ‘Nation of Sanctuary’ reflects this. Far from being a pipe dream, it is a goal, our research suggests, which chimes with how many communities in Wales now feel.

But there are also more alarming findings, within our research. Some 46% of those surveyed were worried about new migrants arriving in their communities. Approximately 34% believe Islam represents a threat to the British way of life, and respondents were twice as likely as not to say that discrimination against white people had become as big a problem as that against non-whites. Perhaps most worryingly of all, young people in Wales tend to be notably less liberal than similar age cohorts in the rest of the UK.

Wales has not faced an electorally successful far right, in the way that some towns and cities in England have. But this does not mean it is immune, as a nation, to overt tensions. In parts of Wales, there are significant latent challenges – in terms of how resilient communities are in the face of future demographic changes or community flashpoints. The targeting by the far right of Penally training camp – where asylum seekers were being accommodated at an army camp in Pembrokeshire prior to being settled – demonstrated this last year. The situation saw protests from locals with concerns, as well as residents who supported the asylum seekers, and even some from the asylum seekers about the poor conditions of the camp itself.

An understanding of place is vital in making sense of all this. Hostile attitudes do not emerge in a vacuum and, as our 2020 Towns Index showed, certain social contexts can feed very directly into how people feel about change and difference. In particular, areas with high deprivation and marked economic decline tend to be more vulnerable. And there are other factors too – demographic, cultural and geographical – that also fuel tensions.

Our work highlights a number of specific challenges, which are especially acute in Wales. Welsh towns are more likely than English towns to have shrinking and ageing populations, as well as to face cross-cutting deprivation. Cultural opportunities are often harder to come by as a result, despite the nation’s rich cultural history.

Economic decline, in particular, has been very pronounced in recent decades, especially in the Valleys, and has brought with it major social issues. Wales has consistently seen more drug-related deaths than England, for example.

The chart below shows all Lower Super Output Areas (LSOAs) – a geographic hierarchy designed to improve the reporting of small-area statistics, generally developed following a census – in Wales. These are neighbourhoods with about 1,200 households. The vertical axis shows the prevalence of liberal attitudes to migration, based on statistically modelled polling. And the horizontal axis shows the change in the number of residents doing industrial jobs. As we can see, the LSOAs where the number of industrial jobs fell fastest are also those where attitudes are the least liberal. 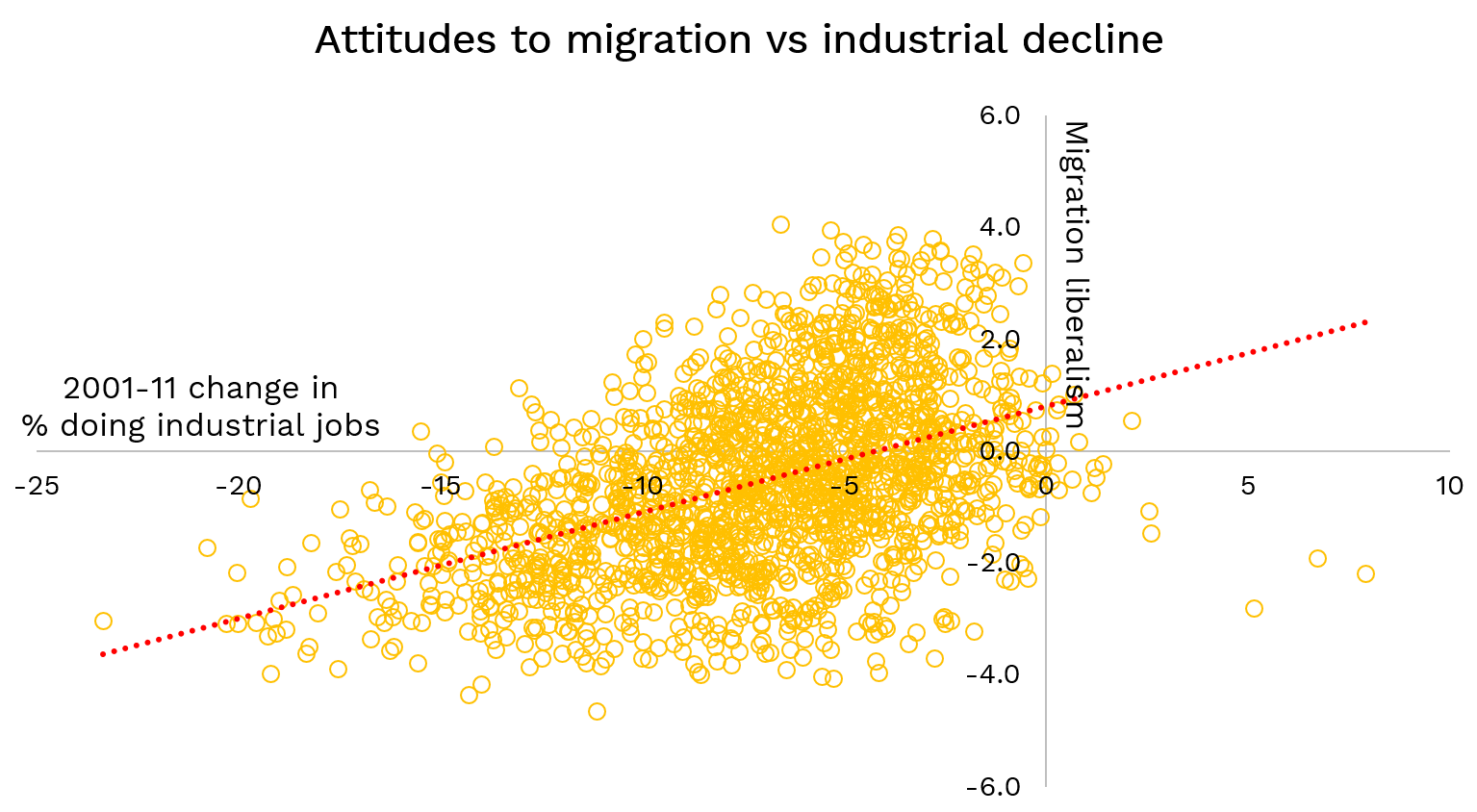 Levels of diversity, meanwhile, are very low in much of Wales and there is less population transience – which can often mean less-liberal attitudes. The resident base of the average Welsh town is much more likely to comprise a demographic that is above average for factors like age and proportion C2DE (often used to define ‘working class’), as well as for the percentages that are non-degree-educated and white.

Around 22.4% of Welsh residents did not have a passport at the 2011 census, compared with 16.5% of those in England. This reflects less networked communities, where there is not as much contact with different groups as in other regions. The chart below again shows migration liberalism on the vertical axis, but this time with the proportion without a passport on the horizontal one.

This time the data is to town level, rather than LSOA level. But, once again, there is a strong trend: Welsh towns where higher numbers of residents do not own passports are less likely to have liberal populations. 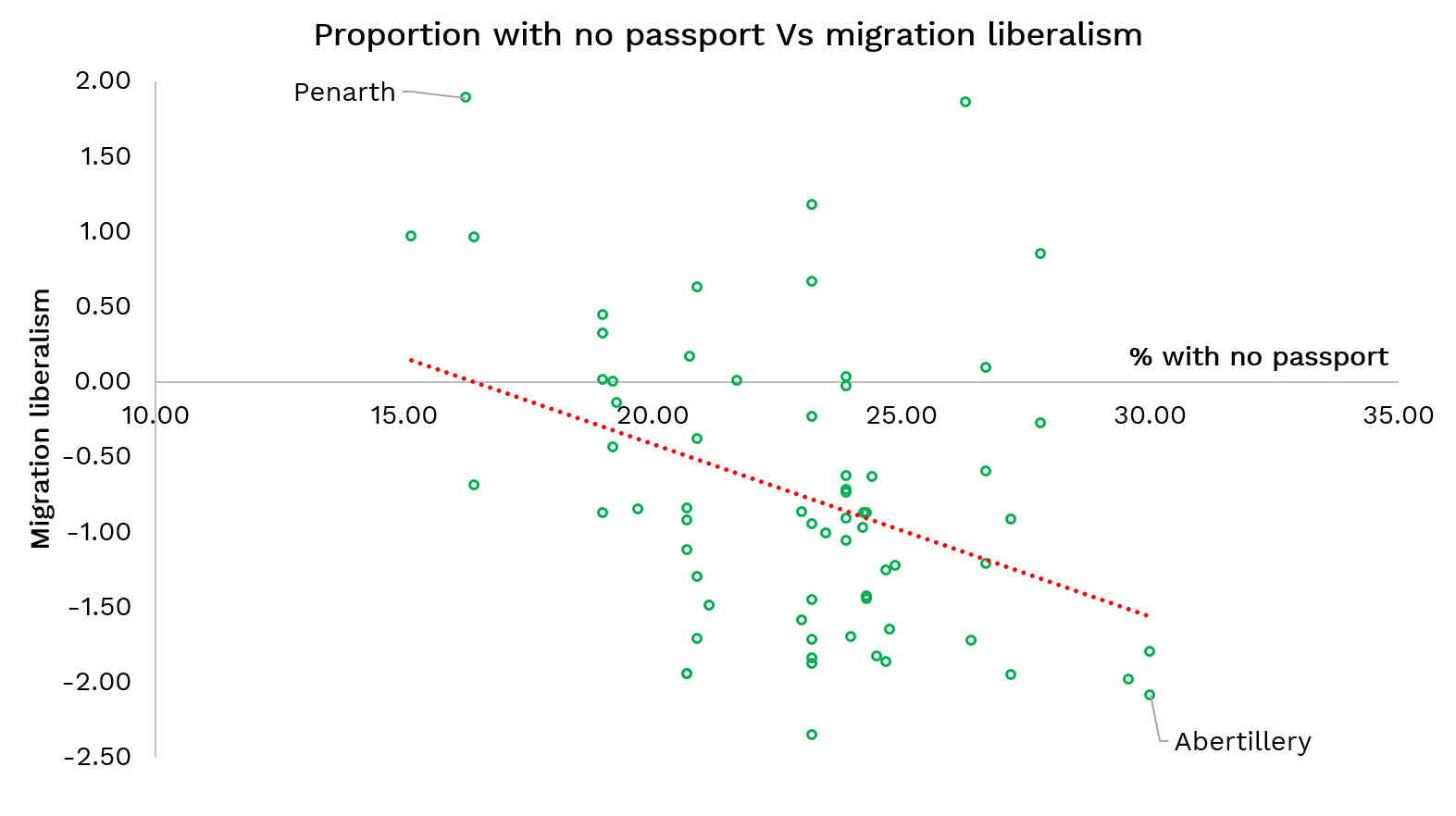 The next chart shows this, again looking at the types of place where Wales’ LSOAs are situated. And the table below it looks only at towns (that is, places with 10,000–250,000 residents). Eight out of ten Welsh towns are small towns – more than in any other region. 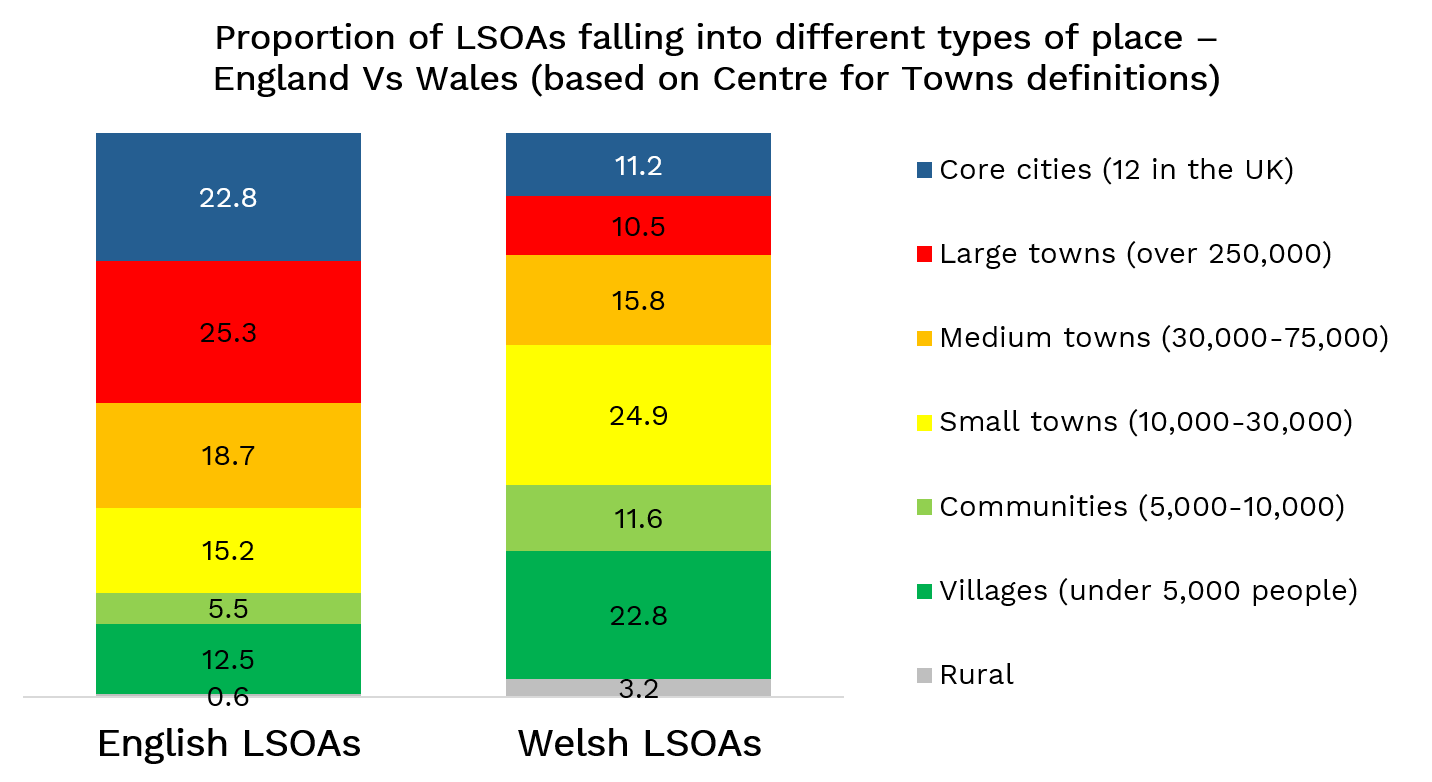 This reflects both the rural character of Wales and the nature of its industrial past. Much of the region’s historic industrial base was made up of small towns and villages, often built around a single colliery. Abertillery in Blaneau Gwent and Tonyrefail in the Rhondda Valley are examples.

This is arguably a major challenge for Welsh towns. Economic assemblage means that a small number of large conurbations are thriving across the UK, as diverse hubs for multiple industries and sectors. Wales has close to the opposite dynamic: a large number of very small towns, each designed with a distinct purpose in mind.

Towns in Wales have thus been at the forefront of many of the economic challenges faced by the UK in recent decades. They are more exposed than most, and this can fuel resentment about change and loss.

In all, we can see some distinct trends, which feature in many Welsh towns: small and fairly cut off communities, little diversity, low population flux, high deprivation, economic decline and a significant lack of opportunities. These factors help to explain the pockets of hostility to migration that our report identifies. And they point to a context, in some communities, which can feed the sorts of frustrations and resentments that the far right tends to exploit.

This context is, it should be noted, different to some other places of the UK that have been susceptible to the far right. Deprived, rapidly urbanising places on the outskirts of London are likely to have a quite different context to ageing Welsh pit towns, even though both might be hostile about change and difference. Acknowledging the differences between places that face challenges for community resilience is often as important as finding the similarities.

Ultimately, it is only by focusing on the root causes that undermine cohesion that decision-makers in both Cardiff and London can create stronger towns in Wales, fostering in every Welsh community the welcoming and tolerant spirit of which many are rightly proud.

Chris Clarke is a policy researcher at HOPE not hate.
Websites in our network