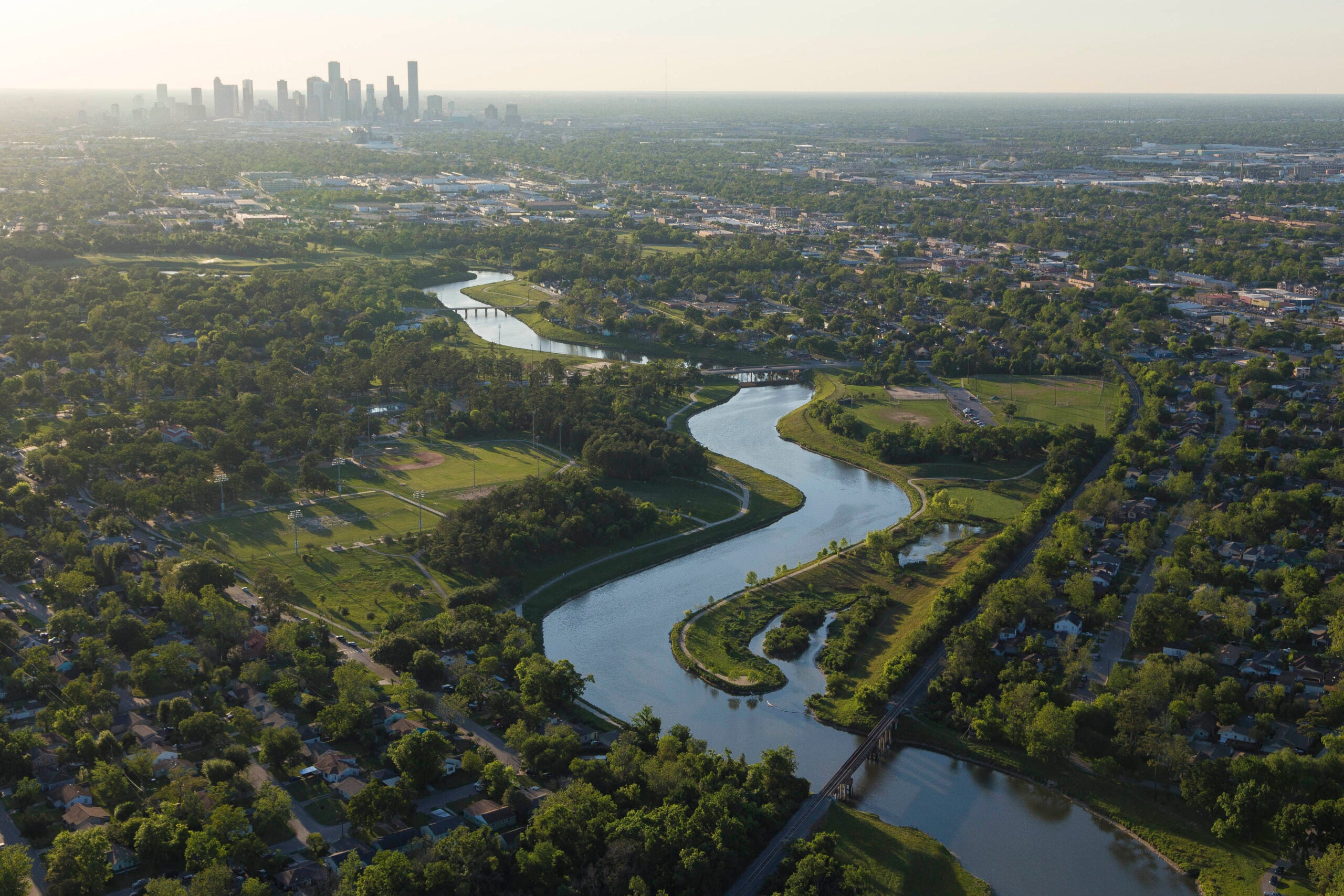 Brays Bayou is part of a new initiative that is bringing 80 new miles of hike-and-bike trails and 3,000 acres of public park space to Houston. (Photo courtesy of Houston Parks Board)

The pandemic has made urban parks and green spaces a key part of everyday life, but decades of patchy investments have left a third of Americans, including 28 million children, with no direct access to a decent green space this year. Historically, low-income neighbourhoods and communities of colour have faced obstacles in accessing quality parks, after centuries of racist urban planning put low-income communities at a disadvantage and far away from green spaces.

Houston is no stranger to structural racism, and the enduring legacy of redlining – the 1930s practice of banks and real estate agents steering Black and Latino families away from predominantly white neighbourhoods – can still be felt today. Against this backdrop of inequity, the city has been building one the most extensive networks of parks and greenways in the country. In the November 2012 election, Houston voters approved a major bond referendum providing $166 million in parks funding, $100 million of which was dedicated to an initiative called Bayou Greenways 2020. In a bid for park equity rooted in the city’s segregated history, Houston has since created over 3,000 acres of green space. Can its new parks be the great equaliser?

The effort started in the bayous – the swampy, low-lying rivers that gave Houston the moniker of the Bayou City. In 1912, architect and urban planner Arthur Comey proposed a series of linear and large parks along the length of Houston’s bayous. Over the past decade, seven of them – there are 22 bayou systems in the Greater Houston region – have been metamorphosed from underutilised backwater channels, flowing slowly through swamps and wetlands, to verdant parks and flood mitigation facilities.  The project brings over 80 new miles of hike-and-bike trails and 3,000 acres of public park space, creating the continuous ribbon of green that Comey had once envisioned.

“Looking at how we can create more park space in this fast-growing city, the bayous were a natural place to turn to,” says Beth White, president and CEO of the Houston Parks Board, a non-profit created in 1976 to improve, protect and advocate for parks for everyone. 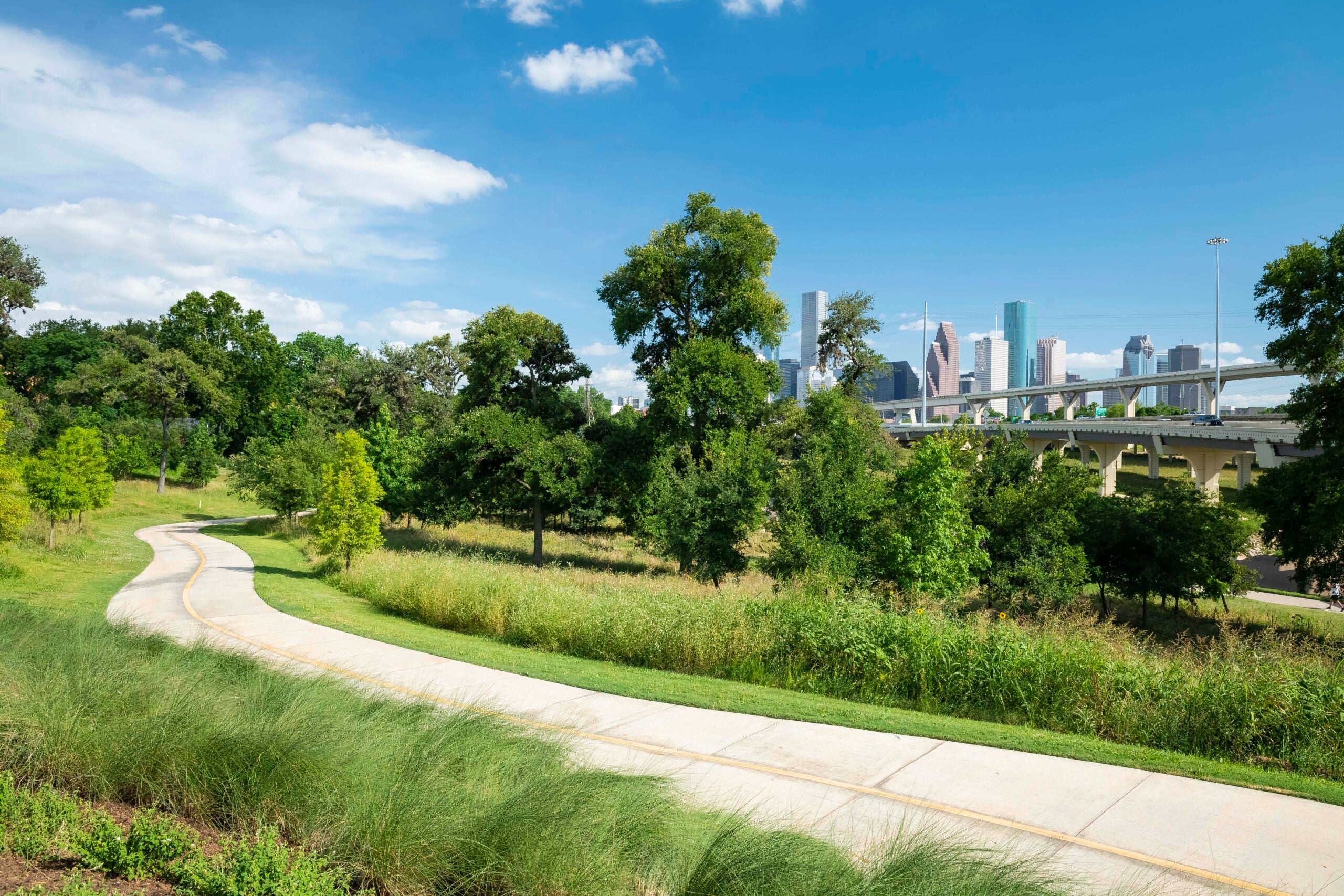 With green stretches already in place, White Oak Bayou was the first to be developed. Snaking through small neighbourhood parks in the Northwest, the space flows through downtown Houston and merges with Buffalo Bayou, now bordered by a 2.3-mile park by landscape architecture firm SWA Group. Brays Bayou, which will span 33 miles once complete by the end of the year, starts near Mason Park on the East End of Houston, meanders past the University of Houston campus, then into Herman Park and the Texas Medical Center, all the way until the West End of Houston. “Each one of these bayous has a different personality; it’s fun to watch how people use them,” says White.

Despite Houston’s reputation for its car-centricity and concrete-knot interchanges, the city now boasts over 66,000 acres of parkland, with 28.6 acres per 1,000 residents (the average being 8.1 acres in U.S. cities of similar density). Houston’s signature green spaces, Memorial Park and Hermann Park, have been around since the 1920s – they too have benefited from recent substantial investments like trail infrastructure, new playgrounds and over 150 acres of new parkland on top of the bayou greenways.

By the end of 2020 and despite challenges including storms like Hurricane Harvey and a global pandemic, 94% of the bayou projects will be complete. By then, the city estimates that 1.5 million Houstonians, or 60% of the city’s population, will live within 1.5 miles of a bayou greenway. That said, it takes more than half an hour to walk 1.5 miles at a moderate pace, often in high heat, relegating many parks to a weekend destination rather than an everyday trip. Forty per cent of the population – that’s 1 million Houstonians – remains too far from public green space.

A city of haves and have-nots, Houston often ranks among the top ten most unequal metro areas in the country, and African-American and Latino residents are disproportionately affected. To address this inequality, Mayor Sylvester Turner, now in his second four-year term, launched the Complete Communities initiative in April 2017. The ongoing program seeks to develop solutions in collaboration with residents and community stakeholders that are tailored to each neighbourhood. The goal is to expand access to parks but also quality affordable homes, improved streets and sidewalks, transit options and more in ten historically under-resourced communities across Houston. 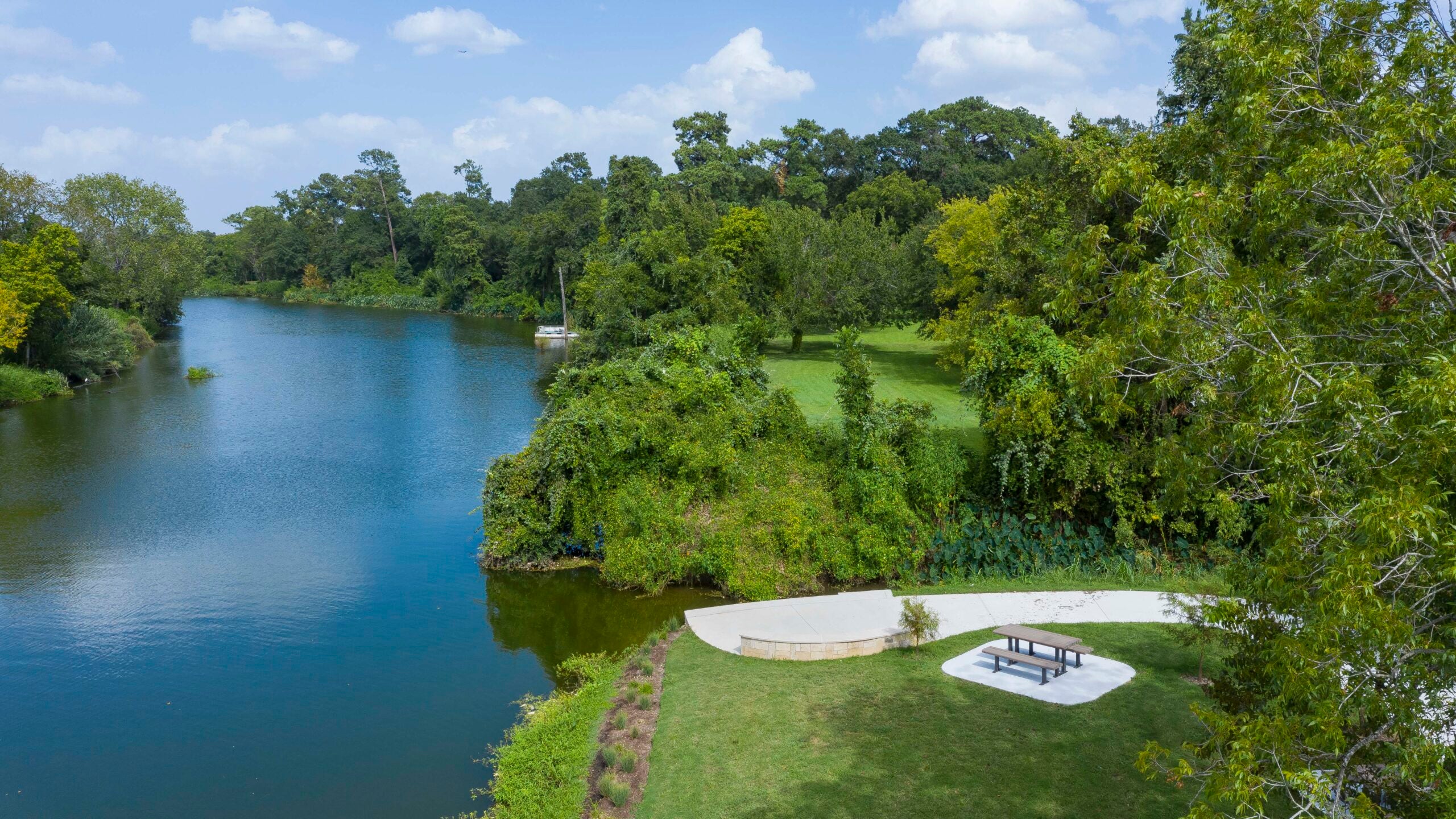 Despite the challenges of storms and Covid, almost all of Houston’s bayou parks (like Greens Bayou, shown here) will be complete by the end of the year. (Photo courtesy of Houston Parks Board, Anthony Rathbun)

“Many neighbourhoods already had a significant neighbourhood-planning effort that also had been done by community partners. We knew we had a good starting place in those neighbourhoods,” says Shannon Buggs, director of Complete Communities. To narrow the list down to ten communities, the city analysed a range of criteria like education level, crime rate, housing affordability, health data, transportation and accessibility. From then on, resident outreach was key. “Residents recruiting residents into the process, we found most effective in ensuring the most representation,” says Buggs.

Complete Communities was split into two phases; the first set of five communities was announced in April 2017 and includes historically Black neighbourhoods like Acres Homes, Second Ward and Third Ward (fun fact: birthplace of Beyoncé). Buggs, who was appointed by Turner, grew up in Fort Bend Houston, a predominantly African-American neighbourhood that will be part of phase two, which was announced in June 2019. “Fort Bend Houston is a very proud and wonderful place, but we didn’t have all the same amenities, the same access,” says Buggs, who now lives in the Third Ward.

Numerous studies have shown that the number and condition of park amenities are related to neighbourhood income and that park use in lower-income communities can be increased by offering more amenities. A 2016 study conducted in Houston’s African-American and Latino neighbourhoods showed that users in majority-minority communities would prefer better park amenities over park-to-park connectivity. As a result, in Eastwood Park in the Second Ward Complete Community, for example, the existing tennis courts, unused by the majority Latino neighbourhood, were converted into mini-pitch soccer areas.

Eastwood Park is one of 170 neighbourhood parks in Houston. “We can’t concentrate all of our financing and energy into the big, signature parks,” says Buggs. So, alongside Complete Communities, Turner launched the 50/50 Park Partners program in October 2019, challenging 50 private companies to join a citywide coalition driving improvements to these places.

Per the city’s Parks & Recreation Department, neighbourhood parks are green spaces between one and 15 acres and include a playground and a range of facilities like picnic tables, gazebos and practice sports fields. In many Complete Communities, that definition was not met. The 50/50 program helped identify which 50 parks out of the 170 needed the most attention to begin with. Criteria like safety, accessibility and overall condition were layered with an equity filter counting population size, racial status, disability, car ownership, health factors and more.

Far from complete, the Complete Communities initiative will outlast the Turner administration. “It’s ongoing because the problems that are being addressed in those communities didn’t just start in the 21st century,” says Buggs. “It’s decades of underserving, of private and public disinvestment into these neighbourhoods.” Until recently, this level of neglect was reflected in the city’s parks. In its 2020 ParkScore index – a yearly ranking by the Trust for Public Land, which analyses effective park systems in U.S. cities – Houston was ranked 78th in the country.

ParkScore’s motto is “Everyone deserves a park within a ten-minute walk of home”. Beth White, who has worked for the Trust for Public Land in the past, describes this as a “wonderful aspirational goal for a national organisation” but highlights the challenges of city-to-city comparisons. “In terms of what is really needed to reach that equity goal [in Houston], Bayou Greenways is just a down payment.”

So what’s next? “Bayous essentially run east and west,” explains White. “If you want to go north and south and connect bayou to bayou, how do you do that?” To find the answer, the Houston Parks Board has outlined a vision that sets up Greater Houston’s public realm as a “tapestry of vibrant, connected communities”.

Following a study commissioned by the Houston Parks Boards and funded by the Houston Endowment in 2018, the Beyond the Bayous initiative paves the way towards equitable distribution of parks, access and connectivity. “It’s really that cities now really understand that parks are as essential as transportation, as schools, as libraries, as jobs,” says White. “You have to have all those pieces working or you don’t have healthy communities.”

Elissaveta M. Brandon is a Brooklyn-based writer whose work has appeared in  publications including Metropolis, Curbed, and Architectural Digest.