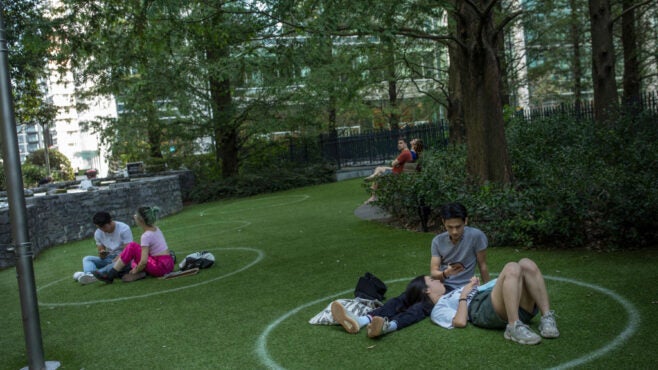 Members of the public use social-distancing markers in a park in the Canary Wharf business district on 14 September, 2020, in London. (Photo by Dan Kitwood/Getty Images)

Urban green spaces have faced a reckoning during the Covid-19 pandemic. Although long heralded for their community and social health benefits, parks took on a new sheen of necessity when public health officials recommended confining social activities to the outdoors. This renewed recognition also put back into focus a sometimes-dire consequence of imbalanced urban development: that cities are often defined by who has access to green space – whether personal or public – and who does not.

In a public health crisis as pronounced as this one, studies increasingly show that access matters more than ever. I recently worked with researchers from Peak Urban – a worldwide partnership of five institutions, based in Oxford – in Colombia, the UK and China who have been modelling key findings about the role of green space in urban development, particularly as they relate to health. Their findings offer several compelling insights for municipal authorities and planners when rethinking these vital public places in a post-pandemic world.

“The months of pandemic have highlighted the headline numbers of people dying from Covid but also the associated grim impacts on mental health, gender-based violence and family dysfunction prompted by the ways we respond to the virus, particularly in cities across the planet,” says Michael Keith, the lead researcher of the Peak Urban team. “For these reasons, we need to bring together an understanding of the ways that cities work with cutting-edge research on public health outcomes, specifically to make sense of the importance of green space for the health and well-being of city dwellers.”

In Medellín, Colombia, Jorge Patiño and his team cross-referenced mortality rates at the hyperlocal level with several built-environment factors, including green space. Controlling for socioeconomic condition, they specifically singled out cardiovascular diseases as a key variable. “With green space, we found a strong signal,” Patiño says. “The more greenness in a neighbourhood, the less mortality rates associated with diseases related to the circulatory system.”

These findings hold significance during a worldwide public health crisis that has largely affected vulnerable urban populations with co-morbidities, namely high blood pressure and heart disease. These same low-income neighbourhoods, where residents have been significantly more exposed to the virus through overcrowding and work, often have the least green space available. And that is where these pre-existing health conditions have been most apparent.

In denser cities with difficult topography, like Medellín, the 15 square metres of green space per person recommended by the World Health Organization isn’t easy to implement, says Patiño. This emphasis on “per capita” measures has led numerous cities in Colombia and the surrounding region, he says, to build out bigger, costlier parks on urban peripheries – a misstep, he argues, given what we know about the power of small parks.

“We’re in a new wave of recent years, where we see the importance of green space near your home,” says Patiño. A growing recognition of food security at a micro scale adds further credence to rethinking green space, he adds; shared gardens and nature-based design in housing should be equally emphasised. “This argument for having small green spaces for your home is another that we can try to bring to urban planners,” says Patiño. “These small interventions could really make a difference.”

Patiño’s study also incorporated research from Cali, where Lina Martinez and her team used satellite images to map the size and extent of green spaces across the Colombian city and paired their findings with surveys of residents regarding their physical and mental health attributes. “The results: the closer you live to a park, the more your physical health improves,” she says.

It’s not necessarily about quantity, either. Martinez stresses that small neighbourhood parks often hold more weight than large, centralised parks when it comes to positive health pathways. “It’s way more beneficial to have small parks near where the person lives than big developments,” she says. Greater accessibility to quality local green space offers residents more opportunities for healthy behaviour changes than, say, one big park does for numerous neighbourhoods.

Patiño’s research does not come without asterisks. His team’s findings are likely transferable to other Latin American cities, but little beyond that due to sociocultural reasons. “When it’s sunny, we go outside. When it’s raining, we stay inside,” he says. “It’s hard to say that it’s going to be the same in a different city, with a different culture, and I think that’s quite important.”

Patiño’s findings are also based on relatively small sample sizes – his team was one of the first to assess neighbourhood-level mortality rates in Latin America. This type of “data scarcity”, he says, is an issue in Global South cities and “an important limitation” to note. “There is certainly a struggle in that,” he says. 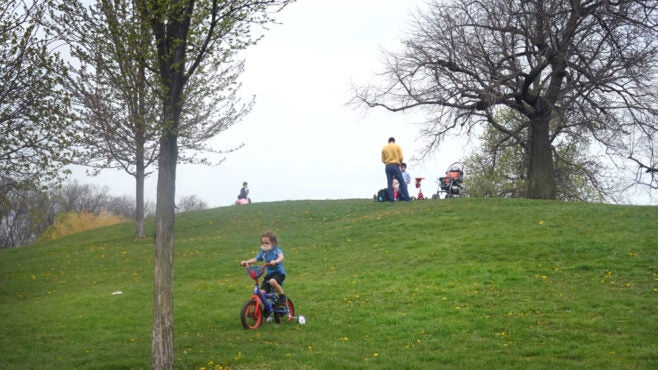 Residents get fresh air and exercise in Humboldt Park in Chicago during the coronavirus pandemic. (Photo by Scott Olson/Getty Images)

Contrast that with the UK, where Samuel Yutong Cai, a London-based Peak Urban researcher and environmental epidemiologist, and colleagues at Imperial College applied machine learning to analyse the effects of green space with a sample size of half a million residents. They found that residents who had access to a private green space (i.e., a backyard or garden) were less likely to suffer from obesity and other health problems. The finding yields significant long-term impacts for public health as well as more immediate concerns related to Covid-19.

“People now talk about publicly available spaces, but not many people mention the ownership of domestic gardens in the crisis,” says Cai. “People in London confined to their flats usually don’t have these gardens.”

Close to 3 million people in the UK live more than ten minutes from the nearest park, an oft-cited measure among advocates for green space equity. But what that park looks like is just as important as its proximity, adds Cai. Parks should be actively encouraging physical activity, whether that’s through gardening allotments or woodlands. “We really have to ask ourselves: how can we diversify existing parks?” he says. “Start at local scale and then promote at the city level.” Allotments, Cai says, serve as a case study for this sort of step change.

Shanghai-based Peak Urban researcher ChengHe Guan analysed the call data from millions of mobile phone records to understand the use patterns of green spaces in cities in China and Japan. He used location data for over 1 million anonymous mobile phone users in Tokyo to plot the frequency with which people use parks in the city and the distances they travel to them. His research identified major differences between the use of large, showcase parks and smaller green spaces.

Distance from a park does not alone explain the use of large parks; in fact, the use patterns are much more complex. Big data can identify patterns, but the lens of mobile phone records also needs to be linked to how people feel about neighbourhoods in the city. Guan says new techniques for mapping such large data sets can provide planners benchmarks to understand patterns of green space use globally and compare them more easily internationally.

“We concluded that the application of mobile phone location data can improve our understanding of an urban park catchment area, provide useful information and methods to analyse the usage of urban parks and can aid in the planning and policymaking of urban parks,” Guan writes.

To optimise public health in any city, he says, the provision of large and small parks needs to be complemented by even smaller and more local green spaces.

Samuel Cai argues that residential developers should prioritise community green space as a key amenity – and that consumers may, in fact, demand exactly this in the wake of Covid-19. The same thinking applies to planners and landscape architects, too. “Biodiversity has to be included in every plan,” he says. “It’s not about the amount of green space; it’s also about the accessibility and quality of the green space. I think that’s the key message.”

Cai believes that research from high-income countries like the UK and the US – where researchers have focused on parks equity and health benefits ­– can be transferable, as it holds global health implications for green space anywhere. “Hopefully, this will apply to the Global South experience and practitioners there can learn from it,” he says.

For those under lockdown, the pandemic held hyperlocal repercussions: it forced urban dwellers to contend with their homes, blocks and neighbourhoods in a way they never had before. Research from three continents now shows that a diverse allocation of green spaces could be a key determinant of better health outcomes, both during this crisis and in the future. If cities want to build healthier, stronger lives, they should pay attention.

John Surico is a journalist and cities researcher currently based in London.