As coronavirus lockdowns ease, people are flooding back to parks – but not everyone has easy access to green space in their city. 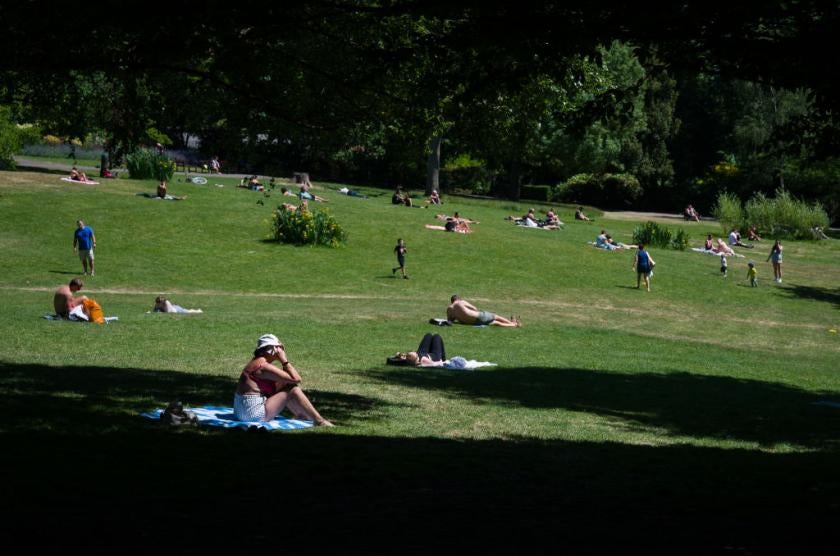 In the UK, Londoners are most likely to rely on their local park for green space, and have the best access to parks. (Photo by Leon Neal/Getty Images)

Statistics from Google show that park attendance in countries across the globe has shot up as people have been allowed to move around their cities again.

This is especially true in urban areas, where densely populated neighbourhoods limit the size of private green space – meaning residents have to go to the park to get in touch with nature. Readers from England can use our interactive tool below to find out how much green space people have access to in their area\ and how it compares with the rest of the country.

Prime Minister Boris Johnson’s announcement Monday that people are allowed to mingle in parks and gardens with groups of up to six people was partially following what people were doing already.

Data from mobile phones shows that people have been returning to parks across the UK, and also across Europe, as weather improves and lockdown eases.

Stay-at-home requirements were eased in Italy on 4 May, which led to a flood of people returning to parks.

France eased restrictions on 1 May, and the UK eased up slightly on 13 May, allowing people to sit down in public places so long as they remain socially distanced.

Other countries have seen park attendance rise without major easing of lockdown – including Canada, Spain and the US (although states there have individual rules and some have eased restrictions).

In some countries, people never really stopped going to parks.

Authorities in the Netherlands and Germany were not as strict as other countries about visiting local parks during lockdown, while Sweden has famously been avoiding placing many restrictions on people’s daily lives.

There is a growing body of evidence to suggest that access to green space has major benefits for public health.

A recent study by researchers at the University of Exeter found that spending time in the garden is linked to similar benefits for health and well-being as living in wealthy areas.

People with access to a private garden also had higher psychological well-being, and those with an outdoor space such as a yard were more likely to meet physical activity guidelines than those without access to outdoor space.

Separate UK research has found that living with a regular view of a green space provides health benefits worth £300 per person per year.

Access is not shared equally, however, which has important implications for equality under lockdown, and the spread of disease.

Statistics from the UK show that one in eight households has no garden, making access to parks more important.

There is a geographic inequality here. Londoners, who have the least access to private gardens, are most likely to rely on their local park for green space, and have the best access to parks.

However, the high population in the capital means that on the whole, green space per person is lower – an issue for people living in densely populated cities everywhere.

There is also an occupational inequality.

Those on low pay – including in what are statistically classed as “semi-skilled” and “unskilled” manual occupations, casual workers and those who are unemployed – are almost three times as likely as those in managerial, administrative or professional occupations to be without a garden, meaning they rely more heavily on their local park.

Britain’s parks and fields are also at significant risk of development, according to new research by the Fields in Trust charity, which shows that the number of people living further than a ten-minute walk from a public park rising by 5% over the next five years. That loss of green spaces is likely to impact disadvantaged communities the most, the researchers say.

This is borne out by looking at the parts of the country that have private gardens.

Though the relationship is not crystal clear, it shows at the top end: those living in the least-deprived areas have the largest private green space.

Although the risk of catching coronavirus is lower outdoors, spending time in parks among other people is undoubtedly more risky when it comes to transmitting or catching the virus than spending time in your own outdoor space.

Access to green space is therefore another example – along with the ability to work from home and death rates – of how the burden of the pandemic has not been equally shouldered by all.

Michael Goodier is a data reporter, and Josh Rayman a graphics and data visualisation developer, at New Statesman Media Group.

Topics in this article : London