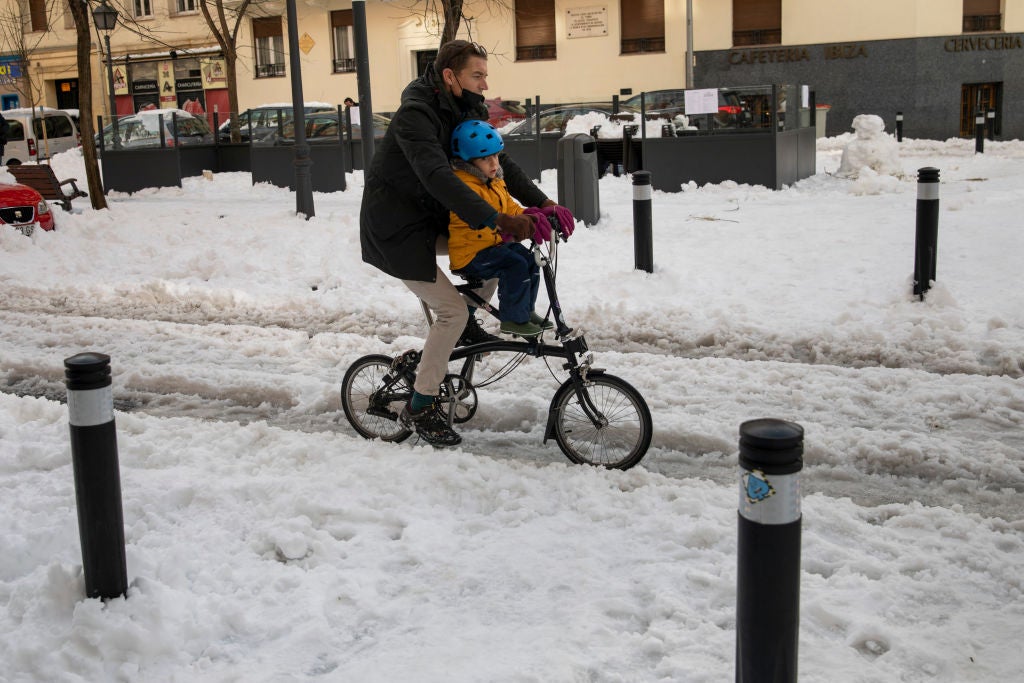 A man rides a bicycle with a child on the snow a day after the heaviest snowfall in decades on 10 January, 2021 in Madrid. (Photo by Pablo Blazquez Dominguez/Getty Images)

It’s the early hours of a freezing morning, and Harri Vaarala, a Finnish traffic engineer, is getting ready to go to work.

“I think my case is a bit special,” says Vaarala. “The typical distance most people in Oulu cycle on a daily basis is closer to five, six kilometres.”

While Vaarala may be one of the few who go the extra mile (as his Twitter profile clearly shows), other residents of Oulu aren’t far behind. Around 20% of all trips made in the city are by bike, with the figure falling to around 12% during winter. Even in Finland’s capital, the much warmer Helsinki, only 12% of trips are made by bike year-round.

Oulu – known around some bicyclists’ circles as the winter cycling capital of the world – is one of the cities with the highest cycling rates in the world, ahead of places like Munich, Cambridge or Shanghai.

Standardised data on transport modes by city is difficult to come by; nevertheless, the table below lists what share of trips are made by bicycle across nearly 700 cities. Note that the figures are outdated and collected from different sources, meaning they cover various years, geographies and methodologies, so they shouldn’t be used as definitive comparisons between locales.

Many cities experienced a growing number of people in cycle lanes last year, when bike riding became more popular as a result of avoiding crowded public transportation during the pandemic.

Even then, numbers declined in many cities towards the end of the year, both because of the colder weather and new restrictions imposed in many countries due to a sharp increase in new Covid-19 cases.

Some critics point to seasonal drop-offs as a reason to limit investments in cycling infrastructure. Empty cycle lanes in winter, they say, would be better off filled with moving or parked cars.

Where cycling drops off in winter

A City Monitor analysis shows that in many cities, particularly those in North America, weather does seem to be the primary predictor of cycling activity.

In the graphic below, the black line shows a seven-day moving average (to account for weekday and weekend fluctuations) of the number of riders recorded by bicycle counters in various North American cities. The blue stripes represent days with average temperatures below 13°C, while the red stripes represent temperatures above that.

The data is collected from individual counters in each city, so it may not be fully representative for the entire city, but it should serve as a good indicator of how cycling patterns change with the weather.

In particularly cold climates, such as those of Québec City and Waterloo (near Toronto), there are virtually no cyclists out during the colder months of the year, with numbers rising sharply in the summer months.

Cyclists in Europe are also less likely to go out in the cold, with the numbers dropping in line with the temperature, but to a much lesser extent, as seen in Hamburg. The number of Londoners and Copenhageners in bicycle lanes doesn’t change drastically throughout the year.

Besides, European cities have a much higher baseline to fall from, compared with that of North America.

Even in Oulu, where temperatures fall to -30°C, a good share of cyclists don’t shy away from making their trips on two wheels throughout the year. It is common for children, for example, to cycle to and from school during winter.

“We prioritise cycling in winter,” says Vaarala, who is responsible for leading and designing smart-mobility projects in Oulu.

“If it’s snowed heavily during the night, we clean cycling paths first, and only after that we move to other streets.

“It makes people trust that they can cycle to work every day, regardless of the weather.” 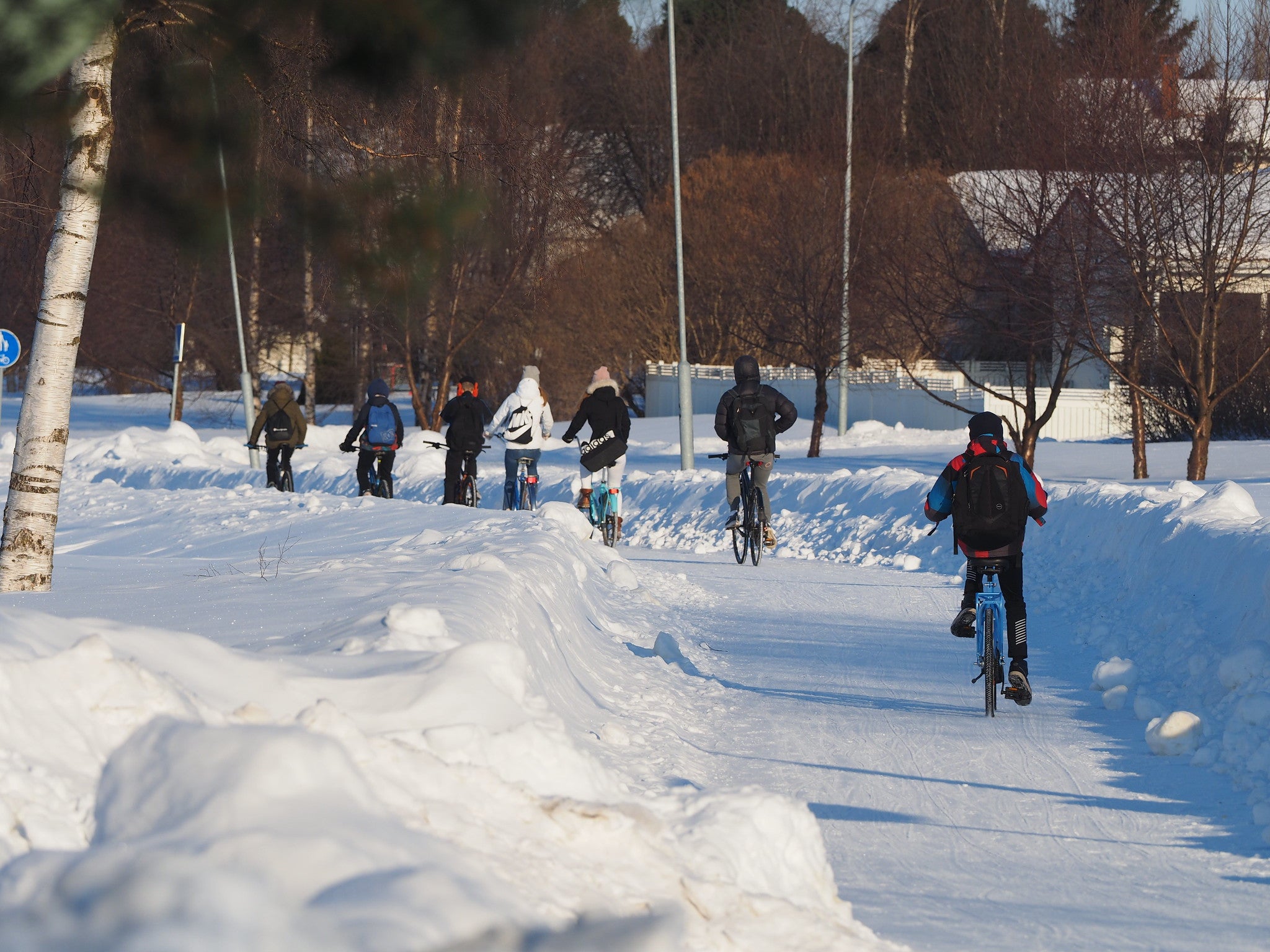 The evidence on winter cycling

Studies confirm that it is poor infrastructure and maintenance, rather than the cold or the snow, that keep bicyclists off their wheels in winter. A survey of cyclists in Toronto found that they were more likely to bike throughout the year if there was a higher amount of dedicated infrastructure.

Improved surface maintenance alone could lead to an increase of 12% to 24% mode share retention on top of the estimated 25% of summer cyclists in Toronto who already cycle in winter.

Proper maintenance of bike lanes would not only encourage more cycling, it would also help keep cyclists safer. An analysis of single-bicycle accidents in Sweden found that the biggest influencing factor was slippery surfaces, mainly caused by ice and snow.

Cycling paths can also often be 1° to 2°C colder than regular roads, meaning they freeze before the car lanes. Yet few cities prioritise them the same way Oulu does.

In fact, cycling lanes in many places are often used as dumping grounds for snow from the street, forcing bikes onto the main road among cars. Even worse, if the temperature dips above 0°C and then back to negative values, the snow dumped on the lanes melts and refreezes as ice, making cycling nearly impossible.

First 2 blocks of Beechwood WB are a mix of cycle track & on-street bike lane. Clearly a road snowplough could not clear that. On/off ramps were blocked. Bike lane near Crichton covered in snow. Only option: take the lane. pic.twitter.com/voem8r9E4j

There are many ways for cities to prioritise bike lanes. One such way is buying snowploughs that are small enough to fit on them. Another is snowmelt systems, underground networks of pipes that heat up streets, keeping them free of snow, slush, salt and sand.

In Oulu, where it snows for a good part of the year, compacting the snow is more practical than removing it, explains Vaarala.

“The snow gives you pretty good friction, so you don’t really need any kind of winter tyres,” he says. “Another benefit is that you don’t need any salt to melt the snow or sand to provide grip.

“If you compare that to Helsinki, for example, where the temperature oscillates between positive and negative values, it’s much more slippery, and you may need winter tyres.”

Every city can improve its cycling infrastructure to make winter biking more appealing. Cities that have done so have been able to save money, reduce congestion, improve citizens’ health and reach sustainability targets.

Oulu has made a strategic decision that it wants to invest in the winter maintenance of the cycling paths. We can obviously see the benefits. Harri Vaarala, City of Oulu

Good, properly maintained infrastructure encourages year-round cycling even in the coldest of cities, but to achieve it requires political will as well as a dedicated resource.

An increased focus on winter cycling

Winter cycling has become an important enough topic that enthusiasts and policymakers meet to discuss good practices, design ideas and policy implementations in an annual Winter Cycling Congress, the first of which was hosted in Oulu in 2013.

This year, the event is taking place online on 11 and 12 February, and the programme boasts a list of activists, academics, experts and government officials from across the world. Vaarala is among the announced speakers at the conference, where he will lead a session on how he helps maintain Oulu’s winter cycling infrastructure.

“Oulu has made a strategic decision that it wants to invest in the winter maintenance of the cycling paths,” he says. “We can obviously see the benefits.

“You can apply many of our operations and practices in other cities, even if the weather conditions are different.”

Winter cycling doesn’t need to be reserved for the most hardcore of athletes. The cities that understand this the soonest will reap the most benefits.

Topics in this article: Data, Roads