As cities radically reconsider their needs for the future, many have gone to great lengths to improve their cycling infrastructure. With pop-up bike lanes and car-free zones proliferating during coronavirus lockdowns, much of the focus has been on bikes as vehicles for commuting. But with the right steps, this could also be a moment to help cargo bikes gain a footing to compete against large, polluting delivery vans and trucks.

Cargo bikes, especially the electric-assisted kinds, have already shown their value as a means for freight transportation under the right circumstances. One company in New York City made headlines in 2015 when it started delivering mattresses by cargo bike, and during London’s lockdown, startups like Pedal Me have used a fleet of e-cargo bikes for essential deliveries of food and medical supplies. 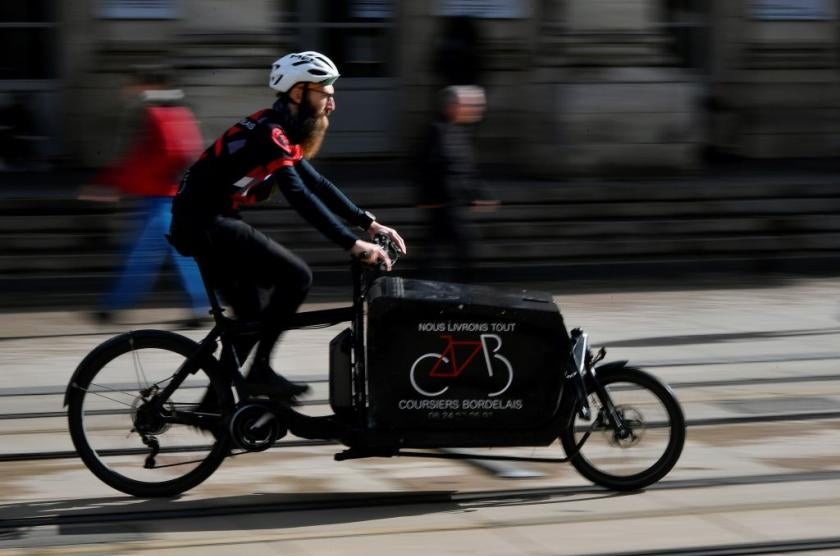 A man rides his cargo bike in Bordeaux, France, in February. (Photo by Georges Gobet/AFP via Getty Images)

Where cargo bikes already serve as a viable logistics method – one that can genuinely cut down on costs, traffic, and emissions – they largely do so in urban environments that weren’t made for them. Roads that are already hostile to cyclists can be even more intimidating on cargo bikes, which tend to be larger and less agile. Those qualities can also make them less suitable to narrow, neglected, and incomplete infrastructure that cyclists know well.

But major European cities in particular have been repurposing their central streets in recent years, and especially since the pandemic began. With dual goals of reducing air pollution and reserving more street space for pedestrians and cyclists, large vehicles are finding their access to city centres threatened by new regulations. Cargo bikes in London, it so happens, can carry heavy loads quickly and efficiently whilst avoiding the Ultra Low Emissions Zone and Congestion Charges.

Before Covid-19, society was largely oblivious to the supply chain and the need to improve it, though some innovative methods of “last-mile” delivery – like Amazon’s much-hyped concept for delivery drones – managed to capture people’s attention. While e-cargo bikes might be a more humble workhorse, there’s a lot that makes them right for this task.

Bike couriers have existed for more than a century, and e-cargo bikes represent two improvements on that tried and true model. First, they can carry larger loads: Most models offer a 350kg allowance across a two-, three- or four-wheel setup. And second, electric pedal assistance allows riders to more easily ascend hills and cover long distances, while remaining a quiet, emission-free and congestion-reducing alternative to motorbike and van deliveries.

Costing £4,000 to £8,000, compared to around £20,000 for a small diesel van, they are also cheaper to refuel (by recharging an electric battery), store, service and insure. And the continued growth of online shopping means more packages are moving around city streets, proving there is demand for delivery services that isn’t always best performed by large vehicles.

According to EU-funded project Cyclelogistics, 50% of motorised trips transporting goods in European cities could be shifted to cargo bikes or e-cargo bikes. The 2014 study found that motorized delivery vehicles vastly underutilised their storage capacity, and that bikes are also better equipped to tackle denser urban road networks. In particular, the study found that e-cargo bikes are best for trips under 7km, with a focus on everyday food supplies and other household essentials.

Of course, some places are more ready for this than others. Germany and the Netherlands already have widespread, functioning cycle networks and a positive cycling culture, fostering a smooth transition to e-bikes. Germany is a market leader on e-cargo bikes, with over 50,000 sold there last year, outselling electric cars. In the Netherlands, cargo bikes are a common feature of the school run, and cycle paths can already accommodate their width. A study by the Amsterdam University of Applied Sciences has shown that a bike using cycle lanes can complete a trip within the Dutch capital six times quicker than a vehicle using the roads.

City authorities can take certain steps to encourage adoption of cargo bikes as well. Design features like designated space for cycling, dropped kerbs, and simple, direct routes will aid the efficiency of inner-city deliveries, and programmes can be set up to encourage people to use them. In 2017, Maastricht was part of a select group of cities chosen for a trial scheme that allowed local businesses to buy or lease e-cargo bikes for a six-month period. If the company made at least four journeys a day and agreed to log GPS data on their usage, they would qualify for 100% reimbursement of up to €4,000.

Cities should also be mindful of how much space they can offer to accommodate secure e-bike storage and maintenance facilities in order to further encourage takeup. Berlin, for example used city and federal funding to open the KoMoDo microhub, a central storage unit shared by a number of major parcel operators. And in Paris, the eco-friendly delivery service Vert Chez Vous uses barges on the Seine to store freight, which can then be distributed around the city via e-cargo bike, and also serve as floating charging stations.

Thoughtful regulation on e-bikes can also help facilitate takeup. While the UK may lag behind some of its European neighbours in terms of cycling infrastructure, the government has so far been benign to the e-bike industry and aimed to incentivize it. In 2015, weight restrictions were removed from regulations, allowing bikes to carry heavier loads. Just this May, it was announced that 18 local authorities and 146 organisations had taken up the Department for Transport’s £2 million eCargo Bike Grant Fund to help purchase e-cargo bikes.

New York City, on the other hand, has long taken a hostile approach to e-bikes. Throttle-based versions were long outlawed, though they remained a fixture of the city’s estimated 2 million daily deliveries. Last December, the city launched its Commercial Cargo Bike Program during the holiday season to replace delivery trucks with e-cargo bikes in the city’s busy midtown and downtown districts. Then came a boost for food delivery riders over lockdown as state lawmakers reached an agreement that would end the city’s crackdown on throttle-assisted e-bikes, which disproportionately affected immigrant delivery workers.

Industry leaders, meanwhile, are starting to take note. DHL piloted a fleet of four e-cargo bikes in Miami this month, after successfully pivoting much of its European operations for last-mile delivery in the past few years. Last year, DHL Americas Express CEO Mike Parra said the DHL Cubicycle – the company’s flagship e-cargo bike – “has enjoyed great success in Europe, with each bicycle deployed taking at least one conventional delivery van off the road, helping to relieve congestion and increasing our service levels”.

Going forward, policymakers will need to continue thinking about e-cargo bikes within the frame of city planning. The pandemic has reinforced cities’ dependency on global supply chains, even down to the last mile. Governments and companies are paying greater attention to their carbon footprint and social responsibility, and as cities take bold moves to reallocate street space, planners and road users alike should keep in mind how cycling networks can be used to move goods as well as people.

Hugo Greehalgh is a freelance writer based in London.