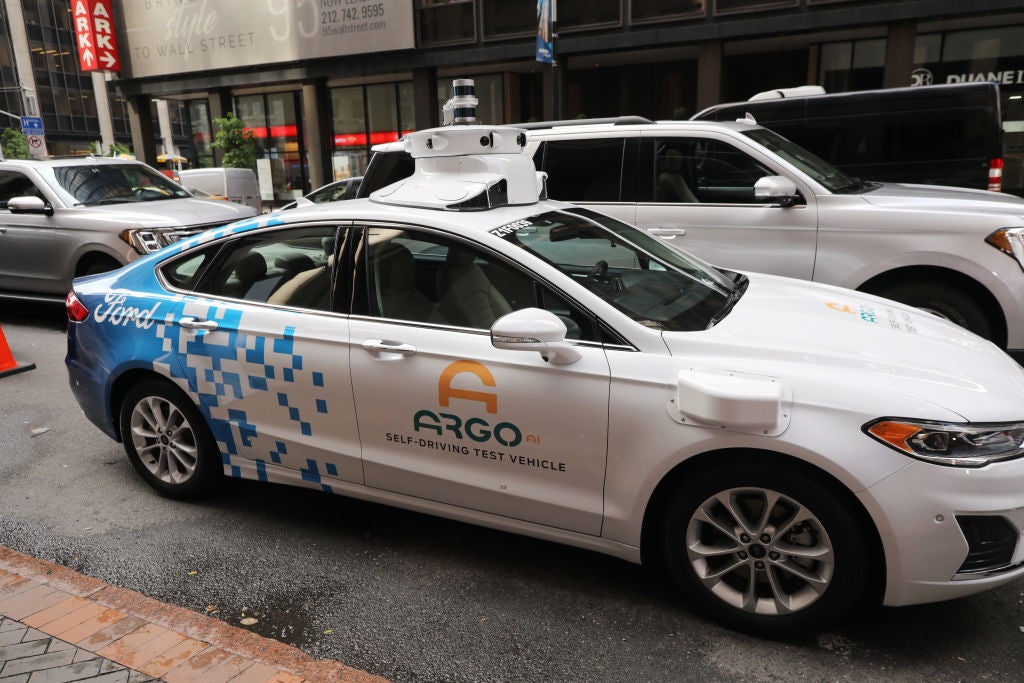 Car-dependent culture has been encouraged, celebrated and subsidised for the last half-century. And yet somewhere along the way (it was actually as far back as 1918), people became obsessed with the notion of removing the driver from the automobile as the path forward. Is that what we should be solving for?

Autonomous vehicles drove three million miles in California alone in 2019. Venture capitalists invested in excess of $10bn dollars in autonomous vehicle (AV) technology that year. Over the past decade, there has been a near-evangelical fervour for an imminent shared and driverless future. But somewhere along the way, the question of what AV technology is actually for felt increasingly muddled.

What are driverless cars meant to do? What problem are they going to solve? Is the goal to end car ownership? Kill public transit? Rescue public transit? Normalise super-commutes? Eliminate the need for parking lots?

Automation is here to stay, but many factors have led to a resetting of priorities. It has not been as easy as most had previously thought to get these cars on the road. We’re at a point where the industry has been – relatively – humbled, with most recognising that this crazy idea might take longer than anyone expected. Elon Musk might still be envisioning tunnels under Los Angeles to ease his commute, but auto manufacturers, tech companies and policymakers are thinking more broadly.

In this time of lockdown, disrupted routines and constrained budgets, that level of, yes, let’s just call it arrogance, has given way to reflection. “There’s a more nuanced discussion about where autonomous plays out,” says Jessica Robinson, founder of the mobility-focused venture capital fund Assembly Ventures.

Or as Scott Griffiths, CEO of Ford AV, puts it: “We hit ‘the trough of disillusionment’ in 2020 – that point we thought ‘this will never work’. Now, going into Covid, we’ve got back to reality.”

“The idea of deploying AV tech in cities is just a lot harder than people realised because of so many edge cases,” says David Zipper, a visiting fellow at the Harvard Kennedy School’s Taubman Center for State and Local Government. Enough uncertainty remains, he explains, that “we’re going to need a driver behind the wheel for a long time. And when you talk about the beauty, creativity or novelty of a driverless taxi, it still sounds a lot like a taxi. What exactly is different about the experience that unleashes all this productivity, creativity and whatever else?”

We hit ‘the trough of disillusionment’ in 2020 – that point we thought ‘this will never work’. Now, going into Covid, we’ve got back to reality. Scott Griffiths, Ford AV

Instead, Robinson says she’s seeing more and more the emergence of discussions that were previously happening behind the scenes: about buses, transit and last-mile goods delivery. “Covid-19 has tamped down some of the enthusiasm around ride-hail while creating space for these other areas,” she says.

The earlier dominance of ride-hail companies like Uber and Lyft is now giving way to the “robo-taxi”, which is a new name for basically the same thing: a driverless trip. There are at least five major players ready to scale up: Waymo (Alphabet), Cruise (General Motors), Aptiv (Hyundai), Ford (working with Argo AI) and Zoox (Amazon). Given the combined capital of these companies, says Anthony Townsend, the author of Ghost Road: Beyond the Driverless Car, “we could be in a position in two years where Uber and Lyft battles are a thing of the past and it’s this group that’s slugging it out for who leads in ride-hail”.

The radical changes in transportation patterns resulting from Covid have created an opportunity, Townsend says, as the need for rail-hail has collapsed with the corresponding impacts of increased goods delivery and greater attention to safe – and sanitised – rides. “This very agile thing has the features of both public and private transport and few of the disadvantages of either,” he says.

I live in San Francisco, and even though I’m not leaving the house much these days, it’s not unusual for me to spot one of these robo-taxis (usually decidedly un-futurist minivans) driving around the city when I do. They’re not operating without drivers – they usually have at least two people, sometimes four, and lately all masked – and one of those people is at the wheel. Just a bunch of people driving around. And around. Training the car to do things automation has a terrible time with – the unexpected.

There are so many unknowns, in fact, that researchers are deployed to think through “moral crumple zone” scenarios to describe how responsibility for an action may be misattributed to a human actor who actually had limited control over the behaviour of the system. If a driverless car hits someone but control of the wheel reverts to the driver at the time of impact, who is responsible? Infinite variations of the trolley problem are being explored with every journey.

The massive stream of capital and the mind-boggling amount of brainpower committed to minimising these unknowns over the past decade has brought us to the strange point where carmakers are including so many incrementally sophisticated and technologically advanced safety features in human-driven cars that they’re well on their way to pre-empting one of the fully self-driving car’s supposed advantages: safety. And that might be just fine.

Safe or not is no longer the right question

By 2022, just about every new vehicle sold in the world’s wealthy nations will have at least automatic emergency braking, which is expected to reduce injury-related crashes by 56% and reduce rear-end crashes by half. (Human error is estimated to account for 94% of total car crashes). Moving forward, carmakers will continue to incorporate technology developed for fully self-driving cars. If someone can stay behind the wheel and still reap all the safety benefits of ever-improving technologies, they may just want to.

A cynical – or maybe just realistic? – take on AV technology is that companies have their reasons for wanting to keep passengers in their cars as much as possible. The latest Tesla interior looks as much like a video game console as an automobile interior. Disney has a group working specifically on in-car media. So does Hyundai. Ford has committed $29bn to get to electric and autonomous vehicles by 2025. There are rumblings of a fully autonomous Apple car, which would no doubt connect to the company’s suite of products.

The vehicle is the next frontier for the delivery of experiences; it’s just another extension of the home and even, in this age of remote work, the office. Soon software will be able to detect the emotional and psychological states of the driver (or is it the passenger?) to deliver tailored features and experiences. Startups are focusing on what you can be doing during your trip, whether in an AV or on mass transit.

As Robinson points out, even on public transport today, there are ads inside and outside the vehicles and in stations and stops. That’s always been part of the revenue model that funds movement. And as long as we’ve been driving, we’ve been looking for ways to make our experience less hands-on, she says, describing a ratchet clamp from the 1950s designed to clamp down a car’s accelerator pedal for long stretches. “A terrifying example”, she says, “but an example nonetheless”.

But there are a lot of safety improvements that can happen with or without automation. Too much focus on tech that may or may not be as deployable or as transformative runs the risk of crowding out more important transportation conversations about low-hanging fruit like reduced speed limits, road diets and congestion pricing. “There is so much we could do that’s a lot cheaper,” says Zipper, “and a lot of it is policy-driven.”

A driverless-car future is one that remains car-dependent. So why are we continuing to design and plan for an automobile-based society? Any conversation that focuses on how technology might transform the car neglects to seriously consider how getting rid of, or at least decreasing the number of, private cars might transform how and where we live. Instead of exploring more effective solutions that could carry more people from one destination to the next, the driverless vehicle, by definition, keeps the car as the number one choice for getting from A to B.

What the stratospheric increase in package and food delivery has done, however, is refocus transportation companies even more towards the movement of goods. “People moving has been declining,” says Ford’s Griffith, “while goods movement has been spiking. So it has us thinking about our business model.”

Robinson is encouraged by greater focus on the link between mass transit and automated ride-hail. In the US, for example, private operators once working solely on ride-hail are now thinking about how to backward-integrate their services into transit. In Europe, the public sector and the transit agencies are taking a proactive approach. “What they’re thinking is, ‘How do we extend our service and our range through these new systems that are coming?’” she says. “In both places, the entities are dancing with one another, but how they got there is different.”

Ford and its competitors are also all-in on the first and last-mile problem. Griffith is bullish on the opportunity: “The last time our country had a chance like we have now to really rethink transportation was after [the Second World War] when Eisenhower created the interstate highway system. We think this is another once-in-a-generation opportunity.”

That companies are thinking more expansively about automation – for package delivery, for shuttles for seniors, for fixed routes like bus rapid transit – is good. But as Zipper points out, “the way to make things better is not to appeal to the better angels at General Motors or Lyft but to really think about the policy levers we have available. If we were to shift from a gas tax to vehicle miles travelled (or VMT) tax – which still feels a way off – that right there is an inducement to gradually, over time, build infrastructure that supports other modes of travel. That would lead to serious diversification from companies who historically build cars and trucks.”

The base functionality of autonomous driving is here – Level 2, at any rate – but it is expressed not in futuristic pods or flying taxis but in unsexy things like braking and cruise control and, weirdly, minivans. The integration of AV technology into public transport networks and delivery systems presents new opportunities to develop multimodal systems for equitable, accessible and sustainable urban mobility (as for suburban and rural mobility, that’s a topic for another article). The clear path to getting there remains long. We were promised flying cars when maybe really what more of us want are safe, reliable buses. Maybe the future of AVs is… boring.

Topics in this article : Roads