When micromobility companies like Lime and Bird rolled into cities around the world in 2018, they promised to revolutionise the way people move around. They dropped dockless bikes and e-scooters onto streets from the United States to New Zealand, asserting that the convenience offered by a shared vehicle that could be left anywhere would help usher people out of their cars and around their city centres. 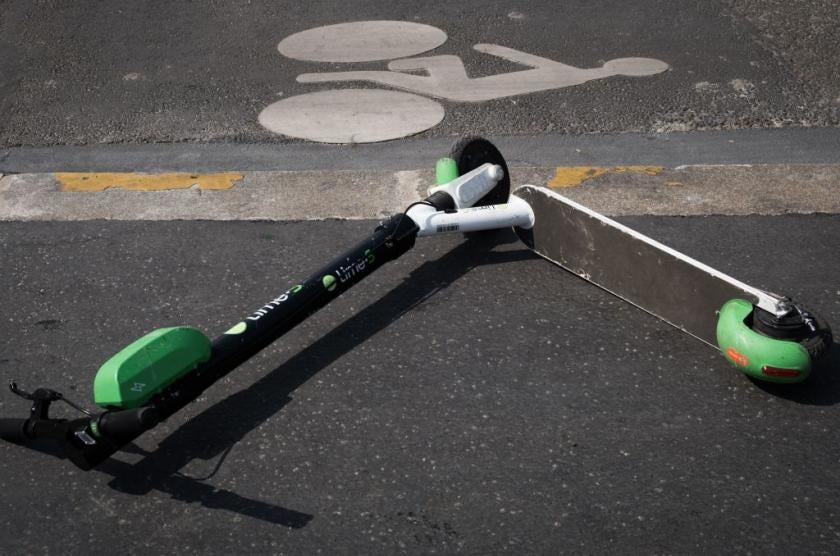 As the coronavirus crisis hit, the prospects for micromobility companies only went from bad to worse. (Photo by Joel Saget/AFP via Getty Images)

But the system they vowed to disrupt has itself changed dramatically this year. People stopped moving around as the coronavirus spread, and their spending on transportation plummeted. Cars disappeared from streets virtually overnight, and support rose sharply for measures to keep it that way after cities reopen.

What’s playing out right now is nothing short of a transportation revolution – but somewhat unexpectedly, cities have a great deal of control over it. As they take urgent action to reshape their streets in an unusual moment, it’s clear that this change is possible without the micromobility industry that promised to make it happen.

Even modest changes to road use are usually difficult and controversial. For all the outcry that followed the sudden appearance of shareable bikes and scooters, it seemed like they at least had the potential to shift public opinion. They could get more people to consider taking more trips without a car, and those users could possibly even ask for road designs that made their journeys safer. It seemed reasonable to expect that flashy startups had a better chance at winning the public’s affection than transportation planners ever would.

It was an appealing gambit for many urbanists: embrace a little chaos from these newcomers if they’ll help demonstrate the need for slower, safer, maybe even car-free streets. The industry’s promises were alluring because they aligned with the ambitious goals spelled out by leaders in major cities around the world to calm the streets, clean the air and support new ways for people to move around.

What nobody could have seen was how suddenly and dramatically the streets – and what people need from them – would change. Perhaps no transport mode has seen more support from local governments this year than the humble bicycle, with cities including Paris, Montreal, Seattle, Bogota, Mexico City and Lima rapidly adding bike lanes and committing to doing much more in the future.

Meanwhile, people have shown a remarkable interest in buying bikes for themselves. Cycle shops around the world have reported shortages this year, especially for cheaper, entry-level bicycles. Since the start of the crisis, 1.3 million people in the UK have bought bikes. In the US, bicycle sales have seen their biggest spike since the 1970s oil crisis, with sales of adult leisure bikes tripling in April, compared with the previous year. Similar stories have emerged in Australia and Canada, while Paris has recorded more bicycle than car traffic on one of its major streets.

Boom times for bikes could certainly be good news for shared-mobility companies, as well, but first those companies have to survive the pandemic economy. It’s not even clear they were going to make it before a recession.

Micromobility companies followed Uber’s model for disrupting notions of personal transportation. That included mimicking Uber’s propensity to bleed money and, often, entering a market without regard for regulators. Investors have allowed Uber to operate at a massive loss for over a decade on the promise of big returns after the company dominates the market it created. That idea was adapted to bike and scooter companies, but investors proved less willing to wait. Even Uber grew impatient, buying Jump Bikes for around $200 million in 2018 only to offload it to Lime this spring alongside an $85 million investment to keep Lime afloat. At the time, Uber’s CEO said it needed to get rid of its micromobility division to “preserve the strength of our balance sheet” because it was losing $60 million a quarter.

The losses should come as no surprise. Speaking to Vice journalist Aaron Gordon, former Jump employees described how the company changed after the Uber acquisition. It went from holding community meetings and working with regulators to dumping bicycles in as many new cities as possible, Vice reported, while the bikes’ sturdy locks were replaced with weaker ones that caused theft to soar. As they scaled up quickly, they lost sight of the original mission to make cities better with bicycles.

These were symptoms of a broader problem with the micromobility model. The companies relied on cheaply made vehicles that sometimes lasted only a few weeks, which meant spending frequently on replacements, plus high levels of material waste. They also failed to serve communities equitably, with surveys finding they mainly serve young, well-paid men. That could be because the services are relatively pricey, often more expensive than public transit and sometimes comparable to an Uber or Lyft ride. At those prices, the services could be useful as an occasional convenience, but it wouldn’t take regular users long to save money by buying a bike for themselves.

As the coronavirus crisis hit, the prospects for micromobility companies only went from bad to worse. The companies began laying people off and pulling out of cities, in a continuation of a pre-pandemic trend. Instead of moving their bicycles and scooters to new cities or donating them, many simply ended up in a landfill.

If the companies fail, it’s unlikely that cities will mourn them. Many already have their own public bike-share services and a great deal of control over designing and operating them to meet their mobility goals. That includes, crucially, the ability to ensure service to communities that have been ignored or avoided by providers in the private sector.

There’s already evidence that such control has been helpful during the coronavirus emergency. City Monitor’s Alexandra Kanick examined data from six US cities and found that some have fared better by adopting new policies like free passes for essential workers or by adding or expanding docking stations near essential businesses. Many of these systems also saw considerably less decline in ridership, compared with their local transit networks.

Several of these bike-share systems have even adapted to compete with the most appealing parts of their startup competitors. Portland and metro Los Angeles already allow bicycles to be locked to standard bike racks rather than docks, and Washington, DC, introduced e-bikes that can be locked to regular racks as well.

The fact is that cities already have options to transform mobility on their own terms. They’re seeing right now that people’s needs and attitudes can change and that their own bike-share systems can be agile to fill a critical need. What’s more, there are already strong models for encouraging individual bicycle ownership even further: Sweden has had huge success with subsidies to promote e-bike ownership, and now Italy, Madrid and others are following with subsidies of their own. France, in addition, offers a €50 ($59) rebate on bike repairs.

The pandemic has forced cities to rethink streets and public spaces with a new sense of urgency. After many reluctantly accepted a new wave of private companies that promised to deliver a future of active mobility, it’s clearer than ever that that vision can be achieved without them.

Paris Marx is a writer based in St. John’s, Canada.