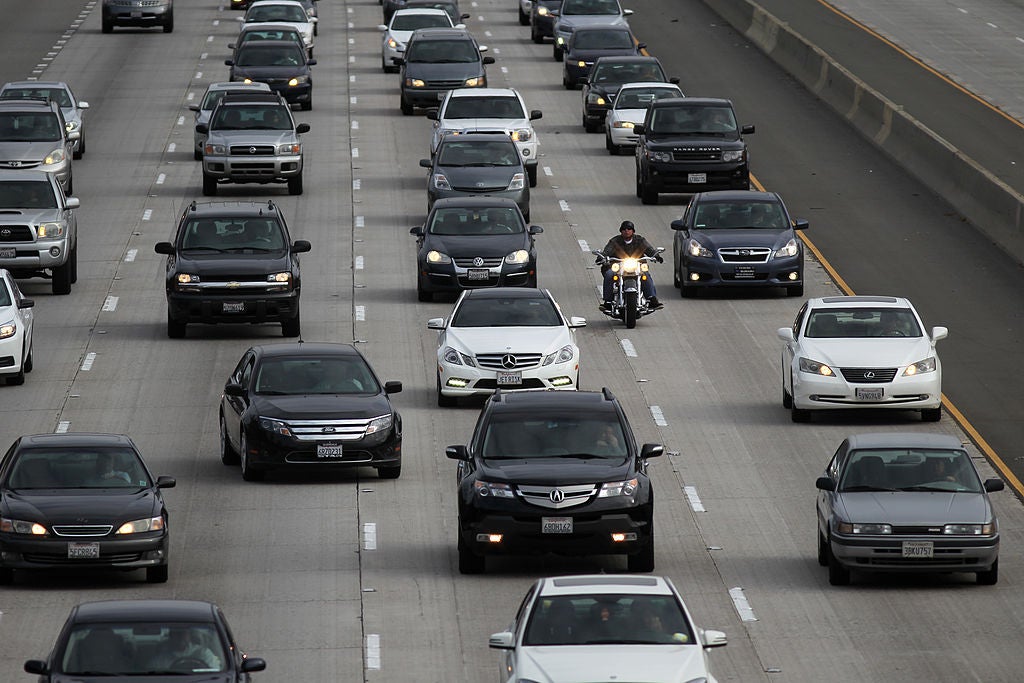 Level of service may not be a bad way to assess car traffic, but people and cities need more from their transportation networks than just an easy way to drive around. (Photo by David McNew/Getty Images)

When cities and transportation planners want to determine how well a roadway or transit line operates, they look to a standard called “level of service” (LOS). Developed in the post-war US specifically for highway travel, the LOS standard assesses the relationship between traffic speed, volume and density, putting a priority on how well vehicles flow through a space.

The approach aims to reflect a traveller’s experience with elements of a city’s transportation network. Routes are given letter grades (A through F, based on their performance) in an attempt to judge how pleasant or frustrating a commuter would find their journey. When projects are proposed for existing routes, they are judged and can even be shelved based on the impact they might have on these letter grades. A bike lane may be scrapped, for instance, if it’s deemed likely to increase car congestion and reduce traffic speeds.

But the mathematics of traffic congestion aren’t simple linear functions, and performance can vary dramatically with small shifts. If a congested highway sees a 5% drop in traffic volume during the end of rush hour, from 2,000 to 1,900 vehicles an hour, that can raise speeds by up to 30% – likely enough to significantly improve a traveller’s journey.

This isn’t a bad way to assess car traffic, but that’s the thing: it only assesses car traffic. And the influence LOS has over transportation planning has far-reaching consequences. Decision making based on these grades takes a myopic view of mobility, where the uninterrupted flow of individual vehicles takes precedence over other factors that could improve an area, like efforts to boost accessibility, safety and sustainability. With a growing awareness that restrictions on vehicle traffic (like congestion pricing) can play a transformative role in cities, it’s worth scrutinising a framework that caters so specifically to a driver’s satisfaction with the roadway.

LOS also runs into trouble when applied to buses and transit. It’s bad enough that it’s a car-centric mindset based on mid-century models of highway flow. What’s worse is that it often provides rationale to cancel routes that rate poorly even if they serve other goals: an imperfect bus route can still contribute to a more robust transit network and address equity, sustainability or land use needs.

In short, level of service follows a long tradition of considering the movement of motor vehicles to be the most important component in transportation planning. In fact, most liveable-streets activists blame LOS for damaging urban spaces and exacerbating traffic and CO2 emissions. As cities rightly reconsider what it means to have successful streets and transit networks, it’s time to revisit the ways we evaluate these factors, too. That means thinking more about the experience of people and less about the convenience of cars.

We can’t fix what we don’t measure. But level of service shows that we can also warp what we measure incorrectly.

For the purposes of congestion, an LOS assessment considers all vehicles equally: a single person in a car counts as much as 50 people in a bus, even though 50 people in a single vehicle contribute far less to congestion than 50 people in 50 vehicles. Measuring only the vehicles on a crowded roadway misses the fact that some of those vehicles are causing a real problem.

It’s also not clear that avoiding automobile congestion is the ideal result: the values of good urbanism, safe streets and successful city planning can be in direct conflict with what it takes to move cars through a space efficiently. A congested road that moves slowly can be much safer for drivers and pedestrians alike than a free-flowing road where drivers can move as they please. And the tenets of induced demand – supported by experiments to ban or restrict cars in busy urban areas – suggest that drivers will fill up excess road capacity where it exists and avoid areas that become too cumbersome to drive through.

If the goal is to build roadways to mitigate congestion, planners are pushed again and again towards creating more lanes and larger highways. Some of the most infamous examples include highway projects in Texas that approach 20-plus lanes, all of which, in the pursuit of faster vehicle flow, become congested almost as quickly as construction crews finish expansion projects. In Houston, the $2.8bn widening of the Katy Freeway actually led to increased transit time over 85% of the route that was “upgraded,” a classic example of the theory of induced demand.

A dense approach to dense areas

Say you’re analysing the impact of a housing development. If decisions about the roadways are evaluated using LOS, they will tend to favour large, sprawling, suburban-style planning with wide roads – an attempt to disperse traffic and keep the flow steady. But if decisions are made with an eye on reducing total vehicle miles travelled – a tally of ground covered by all cars and trucks – they’ll likely favour a dense, multimodal, multi-use, walkable-street layout because proximity to stores and services cuts down on car trips.

Relying so heavily on one car-centric metric distorts the layout of streets and transit routes and ultimately the shape of a city itself. It can also lead to the pursuit of unnecessary urban infrastructure, such as the urban-renewal-era highways that severed vibrant downtown neighbourhoods in the US so suburbanites could drive more quickly to the city centre. Or, to use a modern example, it fuels the fantasy of Hyperloop tracks and Elon Musk’s car tunnels – costly, unproven options that move a relatively small number of passengers but promise to do so with more comfort and convenience. 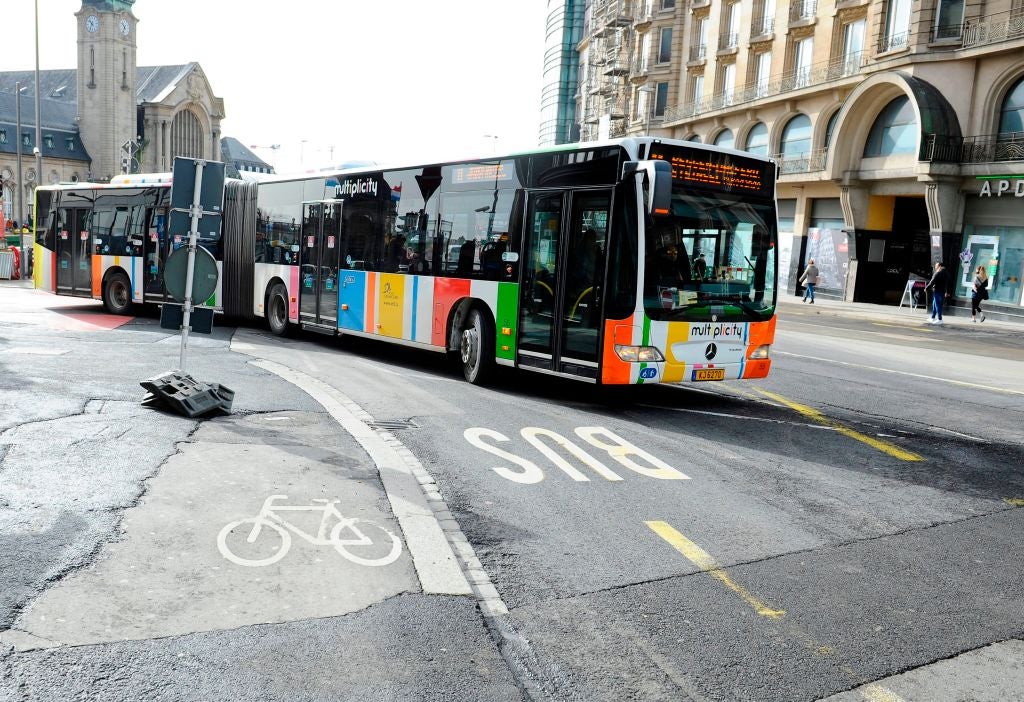 LOS evaluations focus on narrow goals of mass transit routes without considering how they contribute to the needs of their cities or networks. (Photo by Jean-Christophe Verhaegen/AFP via Getty Images)

When it comes to public transportation, level of service evaluates a route’s capacity and frequency, namely the time between pickups at a particular station or stop. Historically, using this approach for transit has focused on the performance of a particular line, as opposed to the conduct of the entire transit network. This often results in metrics that show poor performance in less dense areas that have fewer riders and more time between stops. It also hamstrings needed transit innovations and encourages a revenue-focused race to the bottom that ultimately degrades services and reinforces negative public opinions about buses and mass transit.

In many cases, transit policy focuses on trying to turn a profit while offering convenience. This often favours rush hour routes that serve commuters who work traditional business days in the urban core at the expense of networks that could connect entire regions and better serve people who don’t work 9 to 5.

Under this approach, when it’s time to cut costs, the so-called inefficient routes – the ones judged to have a poor level of service – tend to land in the cross hairs. When funding is slashed, these routes become even less useful for their passengers, which bleeds riders and further damages profitability. It can invite the beginning of a transit death spiral, focusing on limited routes instead of evaluating the overall experience of the vast crowd of commuters.

A 2011 European study of bus routes put it succinctly: “One of the greatest paradoxes of modern transport planning has been the excessive focus on very expensive projects of limited scope (although effective at their point of application), while ignoring the degraded conditions for the vast majority of public transport customers.” This also has an effect on overall economic opportunity. As one example, a World Resource Institute analysis of transit service in Johannesburg and Mexico City showed that the way buses were routed, less than a third of workers could reach 60% of job options within an hour’s ride.

Buses can be an ideal and popular mode of public transportation, though: witness tech workers in San Francisco who rely on fleets of company-operated buses from the city to their headquarters around the Bay Area. (Or at least they did pre-Covid). These buses still face traffic congestion and other inconveniences, but judging them by the standards used to evaluate cars is an unfair comparison. People readily consider the shortcomings of mass transit without factoring in the negative consequences of the cars that might replace them, such as pollution, sprawl and a dependency on highway infrastructure. A car-centric assessment that focuses on transit’s efficiency falls squarely into that same trap.

How different values can improve mobility

With roadways and transit alike, the best measures of effectiveness have everything to do with what’s expected of them – and those expectations can change.

For several decades, particularly in North America, the key goal was to help people drive around increasingly sprawling urban areas that had more people, more cars and more distance to travel. Those trends are changing now as more people realise the benefits of mass transit, car-free streets and cities, and different design philosophies like the 15-minute city.

A street can serve people better by accommodating more than just drivers in a hurry. Transit can serve people better by appreciating the far-reaching benefits of effective systems, not just efficient routes. Phoenix recognised this when it paired its light-rail system with new building regulations and increased bus service. Kansas City, Missouri, did too when it made buses free, aiming to “collect” fares from the increased economic gains more accessible transit brings.

Taken together at scale, that kind of change can have a more profound effect on the experiences of drivers and transit passengers alike than we typically see from corrections based on narrow, outdated assessments for roads or transit. The field of urban planning has, in many ways, expanded its expectations of roadways, transit and mobility in recent years. It’s time to shift to new methods of evaluations that better reflect that.