A drone flying in Helsinki. The Finnish capital city is increasingly seen as the world’s leading hub for unmanned aircraft systems. (Photo by Elisa)

In US cities, the effort to find common ground between citizens and developers of unmanned aircraft systems (UAS) lately has been going from bad to worse.

UAS are so challenging to navigate, explains Nicole DuPuis, director of technology and innovation with the American Public Transportation Association in Washington, “because you have a host of new potential issues like defining flight paths, noise levels, safety, locating airports, privacy concerns over data. Cities are just starting to wrap their minds around this.”

But outside the US, the obstacles to operating drones are being met and collaboratively overcome. Cities like Copenhagen and Stavanger, Norway, are hubs for drone activity, for example. But perhaps the most relevant place may be Helsinki, the Finnish capital, which is paving the way for the operation, regulation and acceptance of unmanned aerial vehicles (UAVs).

There’s so much drone activity taking place – under the radar, so to speak – that many US cities are already operating like airports; they just don’t know it. Shawn Bullard, Duetto Group

Helsinki hasn’t become a global UAS hub because its companies are more technologically advanced than in other hubs like Tel Aviv, although the small country has produced its share of cutting-edge technology. Nor is there a deep and local vein of venture capital financing here. With about 600,000 residents in the city (1.5 million in the metro area), the majority of whom walk to work, the city is even too small to offer much of a future market for air taxis.

What’s different here is that dialogue between the city and its residents isn’t seen as an obstacle. Rather, it’s regarded as vital for refining use cases and testing technology. And it’s not just city officials and national regulators who are involved in those discussions. Over the past several years, developers have been forced to engage constructively with groups as varied as national and European regulators, architectural preservationists, public space advocates, cyclists and groups representing the elderly.

“Here, drones are just one potential part of our mobility as a service solution. We recognise this technology is coming, and it’s important for cities to be proactive. We don’t want to wake up in five years and be overwhelmed with drones,” said Kalle Toivonen, a manager with the City of Helsinki. “We don’t want to regulate before a use case or solution has been tested. We want people to be familiar with a really big change before it is scaled.”

A blueprint for cities grappling with UAVs

The result of this openness has even been compiled into the world’s first guide for cities and UAVs. The result of months of dialogue and dozens of workshops with thousands of citizens, the book was developed in partnership with city officials and Robot Experts, a local firm that advises drone companies and, through its extensive civic engagements, has also assumed the mantle of UAV ambassador. So far, the guide is only in Finnish, but due to demand from Nasa, it is being translated into English for other cities to study. The book offers practical advice on everything from the width of landing pads on buildings, to distance to people when landing, to the thickness of windows to cancel the noise of drones and to prevent cracking. But what it mostly does is create a checklist of hundreds of questions that cities and their residents need to consider as they negotiate with UAS regulators and the private sector.

“Autonomous mobility is part of a holistic package on mobility as a service. It’s part of the soul of being the most functional city in the world,” said Renske Martijnse-Hartikka, manager of a project being conducted by Forum Virium, the city’s de facto office of innovation, to test deliveries of blood samples by drone. “The city isn’t doing this because it’s cool. We just really believe we need to involve citizens in order to be ready for when UAVs are the norm.”

This willingness to work through issues has helped the city’s drone industry, attracting numerous foreign companies and engineers, such as Google’s Wing project. In 2017, aerospace engineer Gokul Srinivasan was one of those newcomers; he arrived in Finland via Texas and India to work on UAV projects. Now the director of technology of Robot Experts in Helsinki, he learned about the importance of dialogue after his pilot programme for drone food delivery with a different drone company ran afoul of local birdwatchers.

For Srinivasan, the setting for testing food deliveries via drones had seemed perfect. Operating out of a bustling incubator for tech start-ups on Aalto University’s sprawling residential campus in Espoo, just ten minutes from Helsinki, demand was evident. Suburban Espoo’s supply of local restaurants was reasonable too, with fast-food joints in the newly built student centre less than a kilometre away from Srinivasan’s office. Persuading these businesses to load their food onto drones also proved a fairly easy sell.

Srinivasan and his team built the world’s first downloadable app designed specifically for airborne fast-food deliveries. At its busiest, his drone company was delivering about 25 orders per day. But for Srinivasan, the food delivery business was always intended as an excuse for testing the intricacies of flying commercial drones beyond their operators’ lines of sight. His larger goal was to design a system that would know where to fly and where to land if his drones detected potential collisions, like with power lines or people.

Initial food runs were positive. Then came an unforeseen obstacle: birds, specifically seagulls. They could smell the food, often circling and harassing the drones midair. Gliding at about 40m in height, the design team’s crafts also agitated nesting birds. Their simultaneous, cacophonous squawks were transforming the bucolic seaside forest-covered campus into something like a loud jungle. Residents were growing annoyed.

The drone activity had also caught the attention of a foe more powerful than well-financed business rivals and more dogged than regulators, and it was snooping around, asking unexpectedly tough questions. The fearsome lobbying group standing in the way of urban air mobility in greater Helsinki turned out to be local birdwatchers.

“Until that moment, I was a hardcore techie,” said Srinivasan. “But I realised that we hadn’t factored in how much time it would take to gain the confidence of the community. We couldn’t be successful without that.” 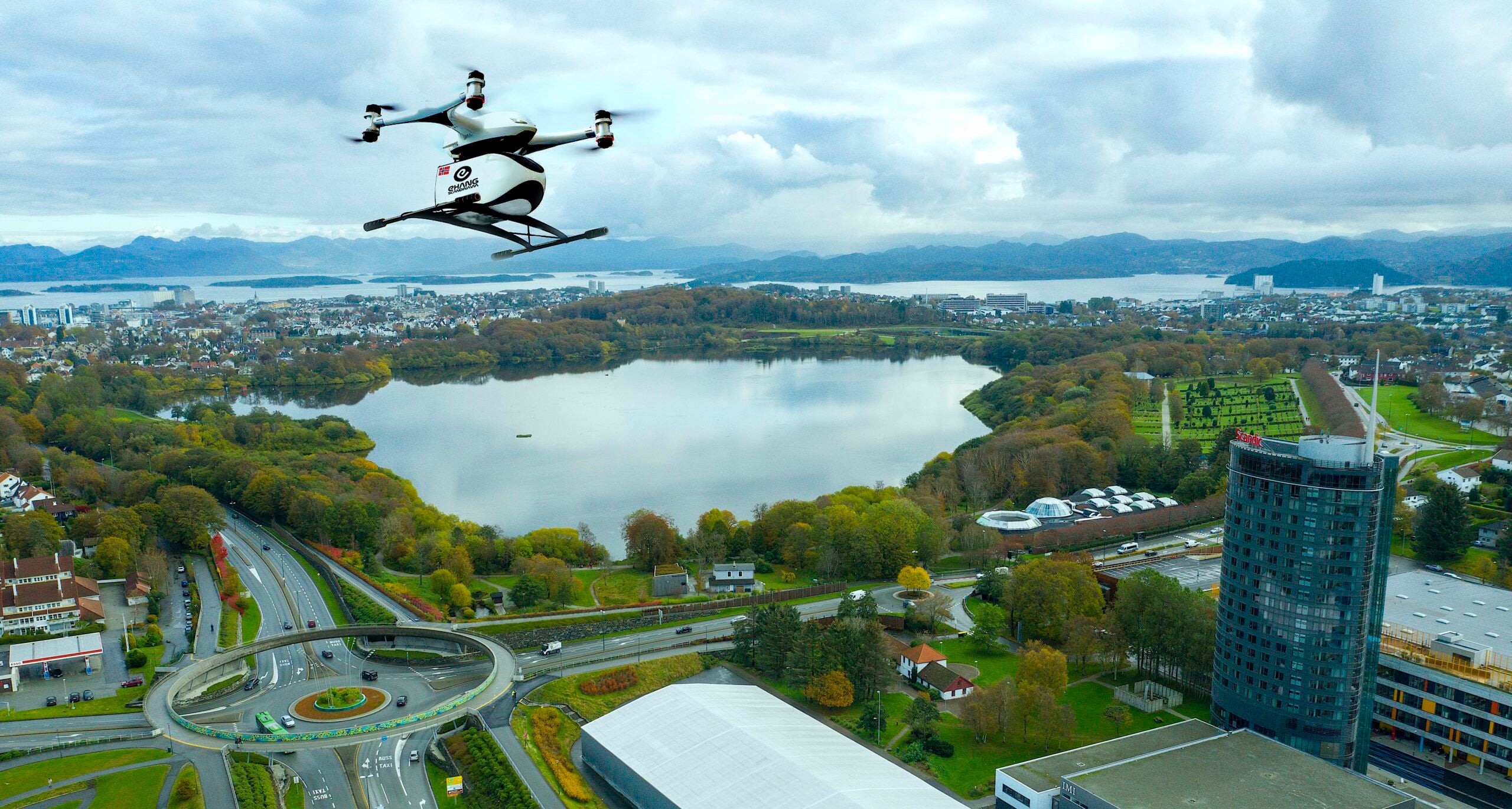 The Ehang Falcon B autonomous aerial vehicle shown above Stavanger, Norway. Proponents believe air mobility will be a safe, secure and more accessible form of transport and delivery. (Rendering by Ehang Scandinavia)

Industry veterans in the US and Canada say their drone companies spend less than 5% of their time focused on citizen feedback; the Helsinki norm is a more encompassing 80%. To appease the birdwatchers, Srinivasan agreed to fly his drones at 60m, a move that failed to placate them. Srinivasan considered lowering food deliveries using a winch and began working with birdwatcher groups on a study that would examine how drones affected aspects of bird life. For a time, regular community meetings were held, but ultimately his drone start-up pivoted to a different line of work, using the aircraft to fight forest fires.

Despite setbacks like this, Helsinki has managed to achieve an enviable number of UAS “firsts”.

The city stands as the first municipality to integrate drone delivery with a busy international airport while aircraft were flying and while being monitored by air traffic control. (For the sake of safety, a drone’s flight was monitored by an unmanned traffic management system while also holding an automatic dependent surveillance-broadcast flight tracker that made its movement visible to air traffic control.) There, the first cross-border drone delivery, between Tallinn, Estonia and Helsinki, was navigated between two 5G networks without a break in communication. Helsinki also pioneered an unmanned air taxi that landed in the airspace of a busy airport. Not least, in several months the city will also be the first to pilot a programme using unmanned air transport to deliver emergency medical services.

It makes sense to look to the example of other countries when tackling UAS operations in cities, says Shawn Bullard, CEO of the Duetto Group, a UAS consulting firm working closely with both UAS start-ups and cities. “There’s so much drone activity taking place – under the radar, so to speak – that many US cities are already operating like airports; they just don’t know it,” he explains.

The Federal Aviation Authority (FAA) has complete dominion over air space, he continues, “but they would be wise to thoughtfully engage city planners and engineers as partners before industry gets too far ahead of itself. There shouldn’t be this tension between the FAA, the drone companies and cities, as safety is a shared responsibility.”

Dorn Townsend is a freelance reporter and urban tech software designer based in Helsinki.
Websites in our network