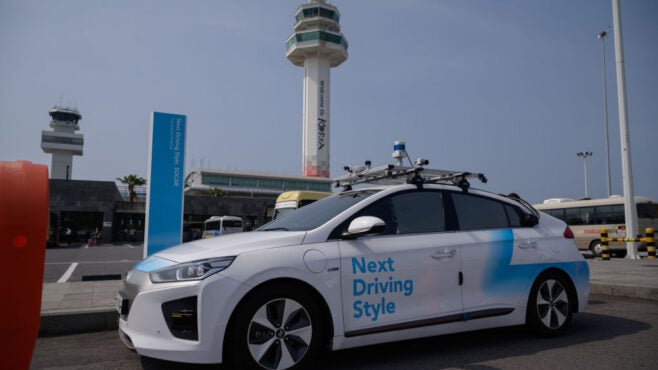 A Rideflux self-driving car in Jeju, South Korea. GlobalData research shows that Asian countries are generally more open to driverless vehicles than those in the West. (Photo by Ed Jones/AFP via Getty Images)

The Society of Automotive Engineers defines five levels of automation, as noted in the chart below.

Several carmakers, including Daimler, Ford, Honda, Toyota and Xpeng, will bring Level 3 models to market this year. This is a significant milestone for autonomous driving, according to Gartner analyst Pedro Pacheco, as it includes use cases that don’t require continuous human intervention. Added to which the UN has delivered regulatory clarity for automated lane-keeping systems co-signed by 60 countries that will clear the way for further development.

The Covid-19 crisis has caused short-term disruption by halting production and testing at many testing and manufacturing facilities. However, it has also prompted a reshuffling of priorities for carmakers, which Pacheco believes will mean a shift from long-term investment in full automation to areas providing quicker returns. “Focusing on electrification and the connected car instead will allow carmakers to recover their investment in a much shorter period than autonomous drive,” he says.

Carmakers and technology companies partner up

Technology is front and centre in realising the fully autonomous vehicle. “Car manufacturers are starting to accept the need to cooperate with technology companies in order to get there,” says Pacheco. For example, Daimler has just signed an agreement with Alphabet subsidiary Waymo to provide autonomy-level driving for its trucks as well as an agreement with chipmaker Nvidia to develop new vehicle architecture and some autonomous drive technology.

There are also a host of other strategic partnerships under way:

According to McKinsey’s Future of Mobility report for 2019/20, carmakers invested $120bn in autonomous drive between March 2017 and March 2019. The report estimates that any single company looking to sustain a competitive position across critical driverless technologies would have to invest an estimated $70bn through to 2030.

Focusing on electrification and the connected car will allow carmakers to recover their investment in a much shorter period than autonomous drive. Pedro Pacheco, Gartner

The requirement for technology outside the realm of traditional carmakers is outstripping available capital and delaying the roll-out of full automation. “Ultimately, they could get there on their own, but this would require a lot of time and money,” says Pacheco. The result is that companies are looking to acquire technology expertise rather than build it in-house, which is driving market consolidation.

The advent of the driverless car is in the hands of technology companies, not carmakers. Fully autonomous cars will see carmakers looking more like technology companies. “That is the ambition, but it requires a lot of transformation, particularly a cultural transformation. Established manufacturing will struggle tremendously with its legacy culture, which will need to change in the direction of disruption,” says Pacheco.

When full automation technology is market-ready, the challenge of customer adoption remains a hurdle. “These are big steps,” says Pacheco. “It is a long time before monetising the investment at scale, which is why carmakers will focus on more short-term paybacks and wait for the technology companies to become autonomous-ready before they invest more heavily.”

A high-profile collision between a Tesla car and a tractor in Florida in 2019 resulting in the death of the driver (who was reported to be on autopilot) has fuelled driver safety concerns. A survey by UK-based motoring association the AA in 2019 revealed that 65% of people liked driving too much to consider an autonomous car. The main concerns about driverless cars were an increase in accident rates, moral decisions being left to manufacturers, and difficulty in attributing responsibility for accidents.

Safety becomes a scalability issue, however, and Pacheco points to the fact that in some US cities such as Phoenix, ‘robo-taxis’ are already in operation within a 50km² area. However, a nationwide roll-out is still a long way off because the learned conditions cannot be safely replicated elsewhere. “The system needs to be so safe that there is zero chance of an accident,” he says.

In March 2018, Uber suspended its driverless vehicle testing on public roads in the US after a pedestrian was killed by one of its test cars in Arizona. This was the first pedestrian death associated with self-driving technology and highlights how public safety concerns could quickly derail a company from further development.

A project is currently under way by the Michigan Department of Transport and 3M to test the ability of autonomous vehicles to read changing road conditions, temporary lane changes and construction. It is the first vehicle-to-infrastructure-connected project in the US, the findings of which could underscore the need for collaboration with public sector infrastructure providers to overcome the technology’s safety hurdles and widen the discussion about accident liability. Volvo is the only company so far to accept liability for accidents involving autonomous drive. Questions remain around individual liability, both legally and for insurance purposes.

Expectations for the widespread roll-out of fully autonomous Level 5 vehicles need to be adjusted. Research company GlobalData predicts a market penetration of Level 5 driverless cars (autonomous light vehicles) of just 1.9% by 2035 in North America and 1.6% in western Europe, compared with 3.3% in China and 3.1% in South Korea, putting Asian countries well ahead in the goal of integrating driverless cars with mass transit systems and ride-sharing.

International regulatory agreements are key if companies are to invest further and eventually reach scalability, according to GlobalData. In September 2017, the US House of Representatives voted to adopt a single piece of federal legislation to replace state-level rules. Many hope the EU will follow suit in proposing a cohesive regulatory framework for its member states.

With full autonomous driving up and running in test conditions, the sector is tantalisingly close to market – and yet so far. While the industry is still in the experimental stages of technology and governments struggle to devise appropriate regulation, autonomous driving has a public confidence problem that will require a social sea change before people take their hands off the steering wheel. Until then, companies will continue to invest in the technology, albeit cautiously, but it will be a long road to full-scale adoption of this emergent technology.

Lara Williams is a senior reporter at Investment Monitor specialising in FDI in the tech and bio-pharma sectors. An experienced writer, Lara previously worked as deputy editor of the Financial Times’s fDi Magazine. Lara has a background in technology journalism writing for the UK’s Computing magazine and has spent much of the past decade living in Silicon Valley.
Websites in our network