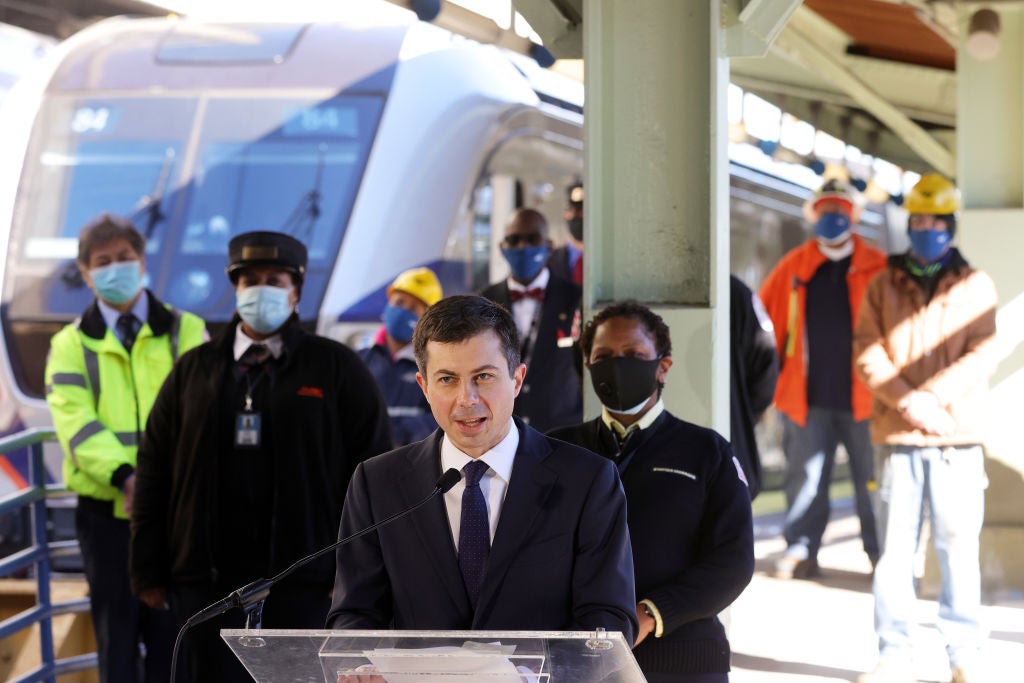 The new US secretary of transportation, Pete Buttigieg, speaks to Amtrak employees during a visit to Union Station in February in Washington, DC. His leadership signals a very different direction for the department. (Photo by Alex Wong/Getty Images)

The visual language of transportation tends towards the monumental. Bridges and tunnels are described as “crumbling”. Calls are made for the US to build “world-class” airports and train halls. But the actual transportation problems we face are systemic and literally experienced on the street: thousands of people are killed every year while walking, often for lack of simple streetlights and crosswalks. In nearly every US city, using public transit means being inconvenienced and underserved. Americans may feel trapped in cars, but policymakers offer them few alternatives.

How fitting, then, that the staff arriving at Biden’s Department of Transportation have the background to run it as a Department of Cities. Secretary Pete Buttigieg may be the best-known mayor in the country thanks to his 2020 presidential run; he has cited the need to redesign local streets and during his confirmation hearings promised to bring a “bottom-up perspective” to the job. Polly Trottenberg, the nominee for USDOT’s number two position, delivered new busways and more than 100 miles of protected bike lanes as the commissioner of New York City’s transportation department.

The difference in approach and philosophy from former presidents is immediately striking – but not just from Donald Trump but from Barack Obama. Consider the approach the Biden administration is taking towards economic relief funding. When the Obama administration moved to confront the Great Recession, its infrastructure stimulus focused on capital construction projects. The result: even as job-creating projects began across the country, transit service cuts made it harder for many people to keep their jobs. Biden’s relief proposal would direct $20bn to keep transit service running for essential workers as well as an infusion of cash into local and state governments.

A focus on municipal experience runs much deeper in the new department. So far, Biden has appointed or nominated nine senior officials with significant tenure in local government or non-profits that advise local officials, a clear contrast with past administrations. While Obama’s second transportation secretary, Anthony Foxx, was mayor of Charlotte, North Carolina, USDOT staff tended to have traditional backgrounds: congressional aides, state transportation commissioners, stints at other federal bureaucracies. Under Trump, the mix grew to include veterans of conservative think tanks and private-sector companies like Lyft and Phillip Morris.

What is notable is not simply that Biden’s appointees come from local government but how many spent their time there in pursuit of more equitable and sustainable transportation. At New York City’s Taxi and Limousine Commission, for example, Meera Joshi faced down Uber and Lyft, crafting first-of-their-kind regulations to provide minimum-earnings standards for app-based drivers. At the Federal Motor Carrier Safety Administration, she’ll have regulatory authority over trucking, an industry that was exploiting workers long before Uber’s Travis Kalanick put together a pitch deck.

Pedestrian deaths have skyrocketed over the past decade, a public health crisis that disproportionately kills indigenous, black and Hispanic people. Robin Hutcheson, who will focus on safety policy at USDOT, worked to tackle root causes when she ran the Minneapolis Public Works Department, most notably by lowering the citywide speed limit to 20 miles per hour.

What is notable is not simply that Biden’s appointees come from local government but how many spent their time there in pursuit of more equitable and sustainable transportation.

Both roads and transit have been built in ways that promote segregation, adding up to a transportation network that systematically excludes black people. While at Portland’s Bureau of Transportation, Irene Marion worked to change procedures and outcomes. She reworked mobility surveys that failed to capture black voices and expanded outreach in ways that changed project decisions. Marion firmly believes that planners should aim not just for equity but justice, producing policy that responds to past harms and reverses the damage. She’ll step into a role leading USDOT’s civil rights division, a job that will allow her to add teeth to regulations derived from Title VI of the 1964 Civil Rights Act that aim to stop discrimination in transportation decision making but nearly always fail to do so.

Though urban areas are the backdrop for most American life, the US’s federalist system structurally disadvantages them in favour of state governments. In his book The Nation City, former Chicago Mayor Rahm Emanuel writes: “Mayors are now running the world.” But in the real world, New York’s mayor doesn’t even run the city subway system. When NYC’s MTA decided to stop running trains overnight in the midst of the pandemic, the order came not from Bill de Blasio but from the state governor, Andrew Cuomo. The interference can be even worse in states run by anti-urban majorities. When Nashville sought to build a rapid bus line in 2014, Tennessee lawmakers legislated hurdle after hurdle into its path. Some Indiana representatives are now following suit.

Federal transportation funding traditionally goes to the states, resulting in spending that is biased towards suburban and rural areas. USDOT’s staff is likely to play a major role in persuading Congress to adopt the administration’s infrastructure priorities, many of which (such as transit relief and removing urban highways) could help rebalance the scales towards more equitable, resilient city transportation networks.

Enhancing the power of local governments

But even without congressional action, USDOT’s technical assistance and grant programmes can build muscle at local governments. During the Obama administration, USDOT partnered with the Environmental Protection Agency and Housing and Urban Development to fund affordable dwellings near transit, wrote software to help agencies forecast transit ridership and provided planning assistance to promote equitable economic development around transportation projects. As a vice-president at Smart Growth America, Christopher Coes helped deliver that assistance – and will bring that experience to the Biden administration as the principal deputy assistant secretary for policy.

A good place for this new team to start is on grants where USDOT can rewrite criteria. Currently, when federal administrators review applications for new public transportation projects, they place enormous weight on the amount of money local governments promise to contribute. This is one reason why rail projects are more likely to be built in whiter cities with better-funded local agencies. The Biden team could rebalance the criteria to prioritise project merits instead. Take the Build programme, a flexible “national infrastructure investments” initiative the Trump regime largely funnelled towards rural highways. It could be recast in support of equitable economic growth: bus lanes to speed trips for essential workers, sidewalks in disinvested areas, projects that lower household transportation costs.

Through its in-house research staff and ability to fund academic transportation research centres, USDOT could fill data gaps that make planning difficult for local leaders. Many cities do not know which streets have sidewalks, let alone what condition they’re in. Researchers could replace outdated tools that get in the way, like forecasting models that exaggerate future traffic growth and are often used to justify city-destroying highway projects while undermining alternatives.

The old adage that “all politics are local” may feel less apt in a world where debate is increasingly nationalised. But mayors and their appointees know well that the challenges confronting a nation often manifest as local concerns. Fixing a bus stop is one step towards addressing climate change. Creating a safe bicycle route to a school can be the same thing as securing public health. Including more people in a mobility survey can lead to a more inclusive mobility system. What Biden’s USDOT team may bring to Washington is an understanding that street-level changes, repeated at scale, can add up to a country that is greener and more just.

Steven Higashide is an urban planner, transportation researcher and author of Better Buses, Better Cities.
Websites in our network