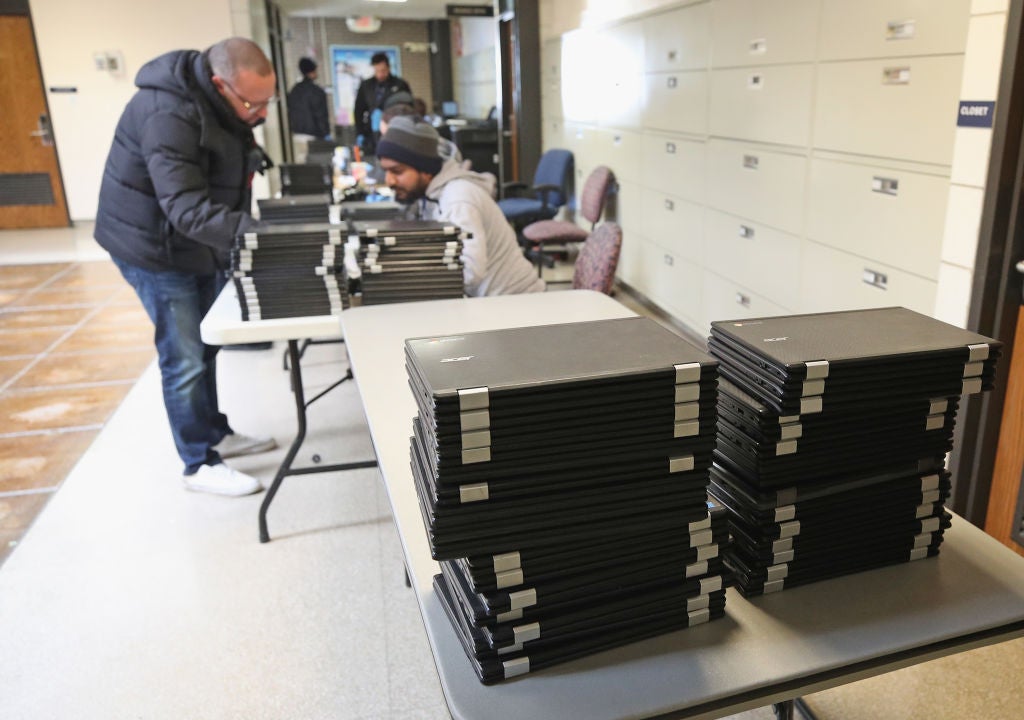 School districts across the US have provided students with computers to use at home while Covid-19 keeps classroom doors shuttered. But many dwellings lack sufficient internet access. (Photo by Bruce Bennett/Getty Images)

Joe Biden’s presidency is beginning with an unprecedented need for broadband internet infrastructure in the US.

Covid-19 has forced millions of people around the US to rely more than ever on an internet connection for work, school, healthcare and just about every other part of daily life. But the ten months since the pandemic began have been full of stories of the country’s digital divide.

BroadbandNow, an online database of broadband internet service providers (ISPs) and their offerings, estimates that nearly 42 million US residents do not have access to such technology. This figure lines up with findings from the Pew Research Center that 17% of US adults do not have that capability in their dwellings. The closure of public internet access sites such as libraries and cafés amplifies the divide between those with and those without broadband at home.

Biden campaigned with a plan to close the disparities that exist in the nation’s internet infrastructure. He spoke about expanding broadband capability to every household in the US, investing heavily in rural connectivity, backing municipal-run networks, encouraging more competition among ISPs, reforming subsidy programmes and providing funding for cities to do more on-the-ground work to get their residents plugged in.

Elements of Biden’s plan have featured heavily in internet advocacy circles for more than a decade, and now that Democrats control the executive and legislative branches, political leaders are looking at how broadband connectivity factors into economic stimulus packages and long-term investments in infrastructure.

How the digital divide perpetuates inequities

The digital divide refers to inequities in broadband-speed internet access across the US, where homes, communities or large areas can lack sufficient connectivity. The reasons are varied: some places don’t have internet providers that offer broadband, others feature services that are priced too high for residents to afford. But the lack of adequate internet capability has compounding effects on people’s lives and access to the economy, particularly during the pandemic.

“It is not just schoolwork that is affected by the lack of action on urban internet connectivity,” former Federal Communications Commission (FCC) Chairman Tom Wheeler recently wrote. “It is virtually impossible to get a job without an internet connection to both search and apply for that job.”

Attending to healthcare needs is also increasingly dependent on the ability to go online. ProPublica reported that residents without internet in the Memphis area missed out on first-round access to the Covid-19 vaccine. Without a connection to schooling, work and health-related resources, residents can fall further away from any definition of equity a city might have.  This reality has fuelled calls for governments to treat internet access like other basic utilities.

“We need a 100% policy. We need 100% of us connected to broadband – just like with electricity, just like with water. That’s because no individual, no household and no community will have a fair shot at success without it,” Jessica Rosenworcel, whom Biden has appointed acting FCC chairwoman, said at a September congressional hearing when she was a commissioner.

One major hurdle to bridging the digital divide comes from the federal government’s own maps and data of broadband service around the country.

The FCC maps are important because they are used to direct funding and resources for broadband expansion. They’re also used to understand competition and pricing among ISPs.

But the maps are widely considered to be inaccurate and misleading. While they purport to show internet services and speeds available at the Census block level, the reality within individual homes can be quite different. Census blocks can equal anywhere from a handful of dwellings on a single city block to hundreds of households across many rural miles.

This means the maps overstate coverage: if even one house in an area is capable of being connected to an ISP’s internet service, the provider can claim coverage for the entire area.  What’s more, the map doesn’t report the actual average speeds being delivered to those blocks. They merely list the maximum speeds available, regardless of cost and what the people living there are actually getting.

“The problem there is that you’re painting with quite a large brush in many of these areas,” says Tyler Cooper, editor-in-chief of BroadbandNow. “And providers have, in some cases, known this and been able to game it in their favour.”

There are other sources that shed light on internet speeds and the digital divide.

Ookla, an internet watchdog that provides global speed tests, recently released granular geographic data on average online quickness experienced by people who undergo their evaluation. Instead of industry-advertised maximums, Ookla looks at what kind of service people are actually getting, regardless of ISP.

City Monitor mapped the FCC’s advertised speeds beside Ookla’s observed speeds to get a clearer picture of how the federally managed data overstate broadband coverage. (We analysed Ookla’s data for fixed internet connections. This data does not include mobile speeds.) 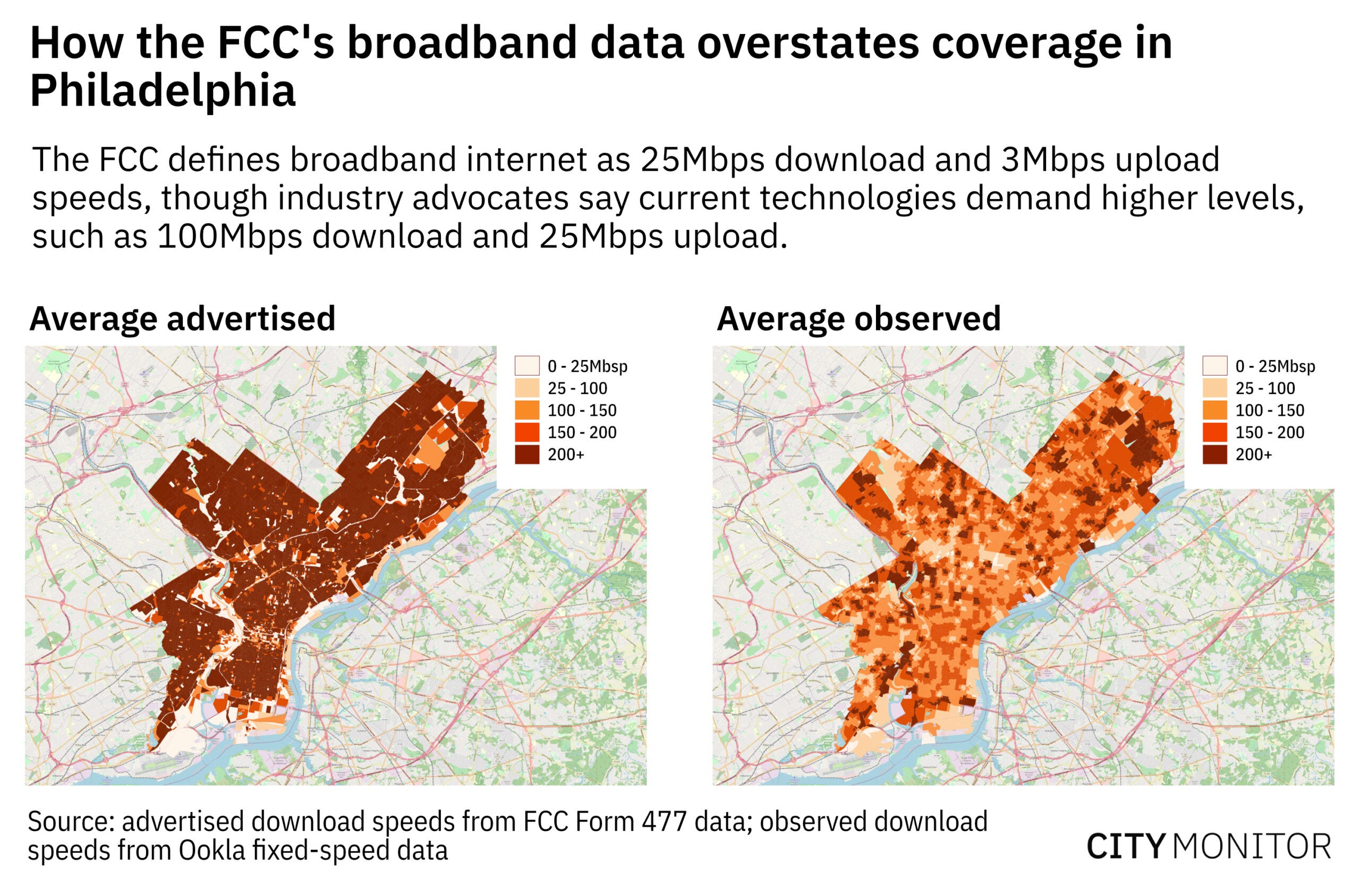 The map of Philadelphia on the left shows Census block-level data on average industry advertised speeds, what ISPs report to the FCC. This map shows very few areas that do not receive 200-plus megabyte-per-second (Mbps) internet coverage. The map on the right, however, shows many areas where the average speeds people experience are below what industry advocates say is necessary for current technologies like videoconferencing.

In addition to analysing individual cities, City Monitor matched millions of data points of Ookla-observed internet speeds with FCC block-level data on advertised speeds across the US and found that metros with populations over 250,000 experienced a larger-than-average difference in actual service versus what ISPs report to the FCC.

There could be many reasons for these differences. Cooper says one is insufficient coverage. He says BroadbandNow receives hundreds of emails each day from people who say they can’t get the internet service advertised in their area – service they know their neighbours are receiving.

Congress took steps last year to address some of the problems with the broadband maps, passing the Broadband Deployment Accuracy and Technological Availability (DATA) Act in March (and funding it with $98m in December). The act requires the FCC to collect more granular data on existing provider networks and their download and upload speeds, and turn this data into a more up-to-date map that can be consulted by federal agencies researching broadband expansion.

But lack of access is not the only reason for the differences between advertised and observed speeds. Affordability is also a major issue, especially in urban environments.

We compared maps of speed differences with tract-level poverty maps to show areas where the highest speeds advertised by ISPs are likely unaffordable to most of the residents. 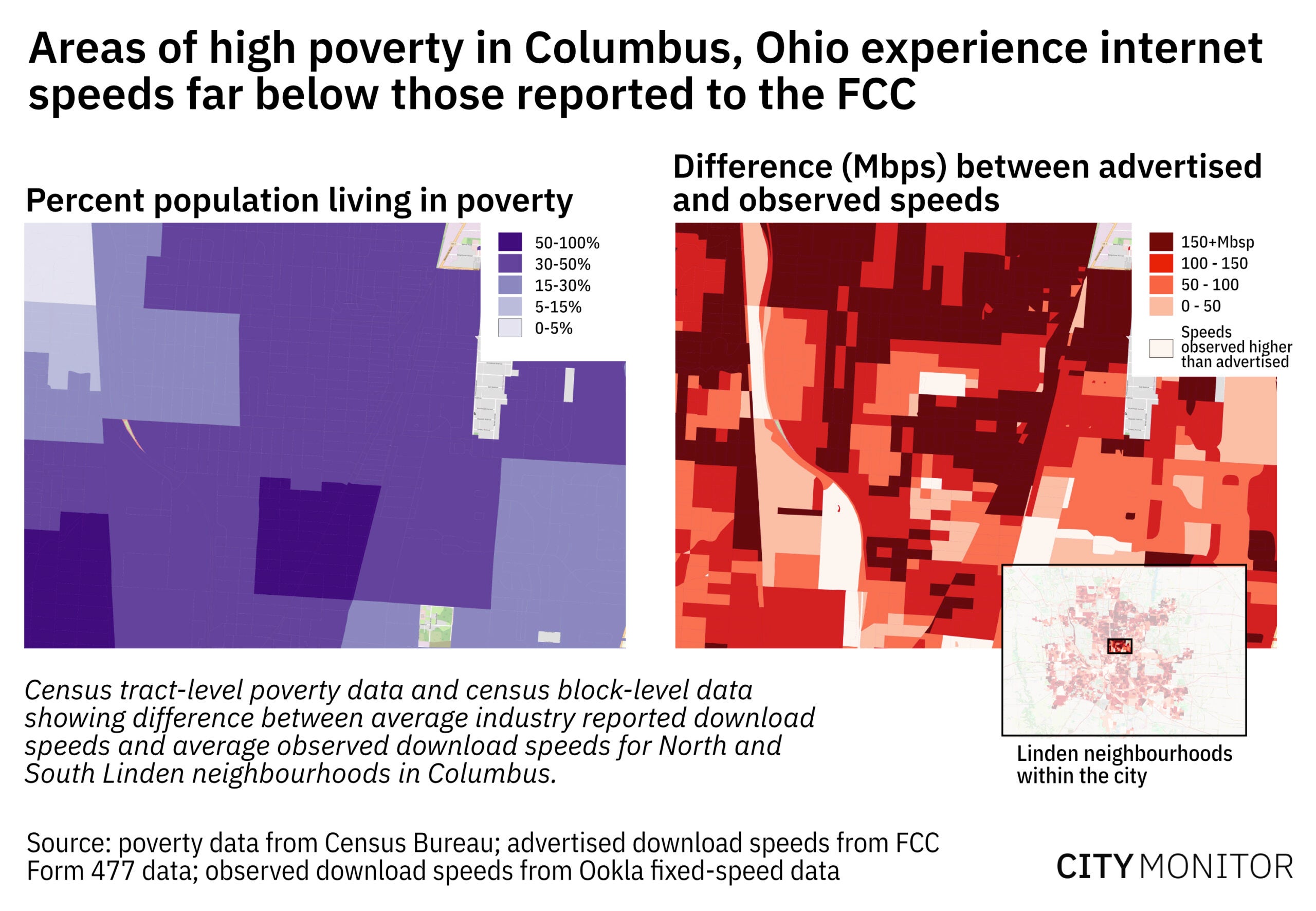 The maps above zoom in on Columbus, Ohio’s North and South Linden neighbourhoods. The locales have high rates of poverty as well as large disparities between industry-advertised download speeds and Ookla-observed download rapidity.

Another mandate of the DATA Act that will be especially important to local leaders is the ability to challenge the speed and coverage data shown on the broadband maps. The FCC is tasked with creating a simple way for local officials to speak up if they know that the broadband maps don’t reflect what’s available in reality in a specific area.

This provision calls on local leaders to know where ISPs are overstating their coverage. This is likely possible only by coordinating with district representatives and community leaders and getting the word out to residents that if they’re not receiving what they need, they need to say something.

In December, Congress provided $3.2bn for the Emergency Broadband Connectivity Fund, which will be administered by the FCC and offer a $50 monthly subsidy for low-income households or those that have experienced significant income loss during the Covid-19 pandemic.

The FCC during Biden’s administration will have to figure out the details of the programme, but like a similar subsidy for telephone service, the payment won’t go directly to the consumer. Instead, it goes to ISPs who pass the discount along to consumers – and it’s optional, so if a provider doesn’t want to accept the subsidy, households won’t benefit from it.

People who already receive the FCC’s Lifeline benefits for telephone service are also eligible for the internet subsidy, which should prove important in identifying those who might benefit most from the fund. Households that meet free and reduced school lunch eligibility also qualify, as do people who have applied for unemployment benefits.

Already, the FCC is anticipating a problem that’s common among new and complicated government assistance programmes: simply getting people to know about it can be a Herculean task. (Megan Stanley, executive director of the Pittsburgh Commission on Human Relations, discussed similar issues with City Monitor last year in relation to eviction mediation and rental assistance initiatives.)

Many questions remain, and the details are fuzzy. But it will be the Biden-era FCC that makes decisions on how the fund is administered. The nuances of how the programme rolls out will be important for local leaders to follow, as it will be beneficial to promote it among residents for a city to fully benefit from the initiative.

Don’t hold out much hope for municipal broadband

While Biden expressed support for fostering municipal broadband networks during his campaign, there may be little he or a Democratic-led FCC can do to bring about change.

Internet advocacy groups point to these city-run providers as effective tools for cities to connect residents in affordable and equitable ways. But the hurdles involved in creating the networks can be significant. According to a May 2020 report from BroadbandNow, 22 states have restrictions on municipal broadband networks. Experts interviewed by City Monitor say they don’t expect the Biden administration to wage the fight it would need to overturn these restrictions.

What’s more likely is that federally owned resources like land and towers will be opened up to local governments looking to provide broadband internet to their residents. Though the gains in this area are likely to be felt more in the rural regions of the country, more urban municipalities may benefit from the added infrastructure as well.