In November 1918, just weeks after the guns had gone quiet and Europe stumbled, bewildered and bloody, into the post-war era, David Lloyd George made a speech in Wolverhampton. Gazing out over a crowd of men, their narrow heads covered with top hats and flat caps, the prime minister proclaimed that the terrors of Ypres and the Somme would be overturned in the buoyant, egalitarian Britain of tomorrow. “What is our task?” the Welshman roared. “To make Britain a fit country for heroes to live in.” 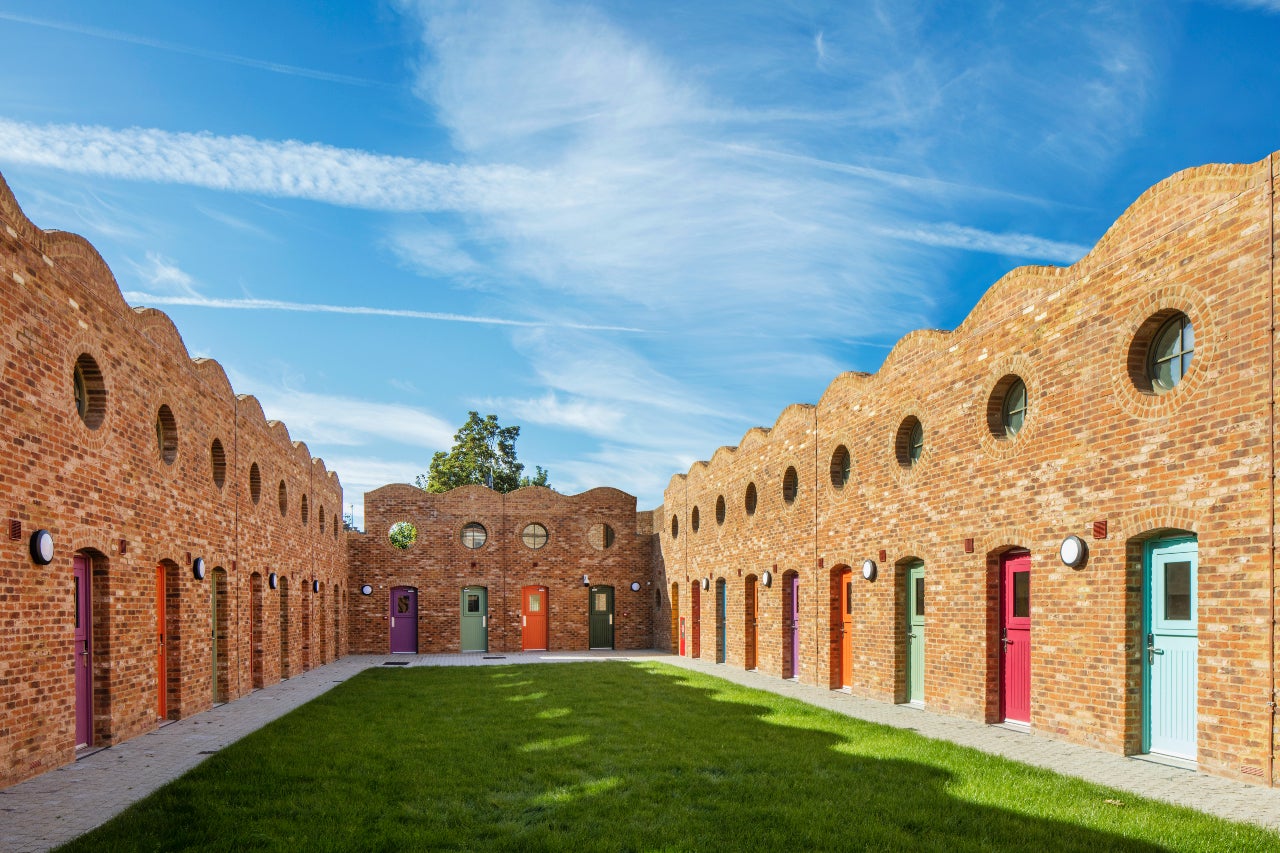 Funded by Camden Council to offer accommodation for the homeless, Holmes Road Cottages were completed by Peter Barber Architects in 2019. (Photo by Morley von Sternberg)

To make that dream a reality, Lloyd George unveiled an epic scheme of house building – half a million in all, with bedrooms and a living room and a scullery measuring exactly 80m². Britain has changed in ways inconceivable to the veterans who heard Lloyd George in the shabby, homogenous country of 1918. Yet for most of the 20th century, through war, economic calamity, and back again, council homes have occupied a hallowed place in Britain’s urban fabric.

By the 1970s, housing associations and local authorities were putting up over 300,000 a year, some blocky and semi-detached, but many others soaring with architectural enthusiasm. And whatever their aesthetics, they were places, proclaimed Nye Bevan, where “the working man, the doctor and the clergyman will live in close proximity to each other”. And live they did – on the eve of Margaret Thatcher’s election, 42% of the country’s population came home to houses built by the state.

Yet over the past 40 years, Britain’s stock of social accommodation has withered. Between the selling off of properties via Right to Buy, a decline in council funding for new projects, and broader attitudes about council estates as ugly and squalid, that 42% figure in 1979 has slumped to below 10%.

There is little architecture, as a profession, can do about those first two points. Yet on the third, from London to the Midlands, practitioners are proving their worth, dragging social housing design away from the clichés and failures that dominated the 20th century.

A partner at Fraser Brown Mackenna Architects, he’s old enough to recall when social housing was dynamic, exciting. Think of the Southgate Estate, near Liverpool, he says. Designed by James Stirling, and unveiled in 1977, it was a “masterpiece” of modernist architecture, all-round windows and multicoloured tiling.

Peter Barber, founder of Peter Barber Architects, makes a similar point. He highlights the work of people like Sydney Cook, council architect for the Borough of Camden in the 1960s, who took simple concrete and made it beautiful.

You can still see that ambition now, at places like Alexander and Ainsworth Estate on Rowley Way, with its ascending ziggurat terraces, red pavements and plants jumping up like between the doorways. Completed in 1978 by Neave Brown, it was the first council estate to be grade-II listed, described by then Heritage Secretary Peter Brooke as “one of the most distinguished groups of buildings in England since the Second World War”.

Not all post-war council housing has proved successful. Spurred on by the utopianism of theorists like Le Corbusier, some areas saw the construction of looming tower blocks, strong on floating passageways but light on practicality. The Southgate Estate is typical here. A stylistic marvel it may have been, but tenants weren’t interested in living in a place they dismissed as “Legoland”. The project was abandoned in 1990.

More to the point, similar problems still haunt parts of Britain today. “We have chosen to demolish one high-rise block due to its configuration and the fire risk involved,” notes Mark Lowe, Nottingham council’s head of regeneration and housing delivery.

Lowe and his team have also had to bulldoze several more blocks at Lenton, west of Nottingham’s centre, because they were built inefficiently, making upkeep too expensive. You get the sense, too, that failures like Southgate helped bring down the good name of social housing generally.

Beyond negative perceptions around council housing, however, its decline really began in 1980, with the Thatcher government’s ‘Right to Buy’ scheme. Now allowed to buy out their tenancy – and offered discounts of up to 70% for the privilege – countless families snapped up the deal of a lifetime.

By 1987, over one million council properties across the UK had been sold off. To make matters worse, councils didn’t even get the proceeds from the bonanza to build new houses, the money instead going straight to the Treasury. In a society where council housing was quickly disappearing, and where the stock that did remain was often tarred as inadequate, many architects unsurprisingly found their enthusiasm for new builds waning.

If you know where to look, you can find a little wedge of old England in the sweaty heart of modern London. You’ll find it on Holmes Road, in Camden, snug between a Catholic primary school and a Victorian townhouse. Step through the black gate by the pavement and they’re there – two rows of almshouses, prised gently from the tenth century, with the same porthole windows and the same rough brick walls.

The only sign, perhaps, that the Holmes Road development isn’t actually from a more sombre age are its doors. In red and blue and orange, they’d probably have been too bright for Alfred or Aethelstan.

Just as well. In their human proportions, fitting like a jigsaw piece into the cityscape beyond, the Holmes Road cottages are supremely contemporary. Funded by Camden Council to offer accommodation for the homeless, and completed by Peter Barber Architects in 2019, the project is just one example in a torrent of new social housing projects across the UK. Barber describes the avalanche as a movement – one that proclaims “a more dense, repacked, conventional form of urbanism”.

Spurred on by a supply crisis that’s launched house prices to the stratosphere, leaving millions of people stuck renting in the private sector, Barber’s revolution has plenty of followers. In the Buckinghamshire town of Aylesbury, for instance, Simon Fraser and his colleagues recently finished a row of miniature social houses. Known as Gatehouse Road, the development is built from a series of repurposed shipping containers.

Though they’re aesthetically distinct, both the Camden and Aylesbury projects in fact share much. First, there’s location. The London development squeezed 59 units into the back streets of Camden, even leaving space for a communal garden. Gatehouse Road, for its part, was built on a narrow patch of wasteland that once hosted garages.

Then there’s scale. Forced by necessity to abandon the vaulting ambition of Le Corbusier and his disciples, Barber and Fraser kept their gaze lower. One of the joys of projects like Holmes Road, he says, is that it forces him to wriggle out solutions – he says he sometimes feels like an “escapologist” – that fit elegantly into the existing urban landscape. Whether it’s broadening a square, or opening up a new thoroughfare behind houses, Barber adds that a public-spirited approach is vital, and most effective, in getting the community on board.

As this last comment implies, getting local people behind new council housing projects is vital to their success – especially in a country with such strict planning laws. Support from the powers-that-be is crucial too.

Yet it’s clear that even beyond Camden and Aylesbury, councils are again willing to back ambitious new social housing projects. A good example comes from Nottingham, where Mark Lowe, together with the council’s arms-length management organisation, has helped redevelop the site of Lenton’s benighted towers into something far more appealing. As Lowe puts it: “It was central to our vision to make this a great place to live that included private gardens and communal spaces.”

The similarities between Camden and Aylesbury don’t end there. Like Gatehouse Road, Lenton Gardens, as it’s known, refuses to be ghettoised, and is arranged to encourage pedestrians and cyclists. Like Holmes Road, it’s designed with a deep sense of history, the blue brick patterns adorning its family homes a 21st-century nod to the terracotta detailing of nearby Edwardian homes. Legoland, or anything like it, is nowhere to be found.

An Englishman’s home is his playground

Lenton Gardens has already secured 145 new council-owned homes for the people of Nottingham, while a nearby apartment block offers 57 more flats for older residents. Nor is the Midlands city alone. In the seven years since 2012, London councils have built over 2,000 social houses. In the seven years before 2012, they managed a mere 70. Camden Council, the erstwhile employer of Sydney Cook, has 3,000 new properties planned over the next 15 years.

More broadly, Fraser wonders whether this move to softer, more humane forms of domestic architecture could herald a broader shift in how the British think about their towns and cities. He describes his experiences of the Netherlands, where more relaxed attitudes towards privacy and personal space mean that streets are often scattered with people chatting and dining out.

It goes without saying that creating a similar atmosphere in Birmingham or Bristol is far easier when the places people live are right on the street, forcing interaction whether their isolationist sensibilities want it or not. “It’s more dynamic and lively,” Fraser summarises. All good news – yet the battle to build a new generation of council accommodation is far from over.

As Barber points out, a city like London is one of the richest the world has ever seen, yet hosts 7,000 street dwellers and 150,000 more in insecure accommodation. Much progress has been made, in other words, but Lloyd George’s pledge in that extinguished, sepia-toned world remains just that.

Topics in this article : Social housing

Andrea Valentino is a freelance journalist based in New York.
Websites in our network