There is little disagreement that building more housing at a regional level drives down prices for most residents.

At the hyperlocal level, however, there is consistent debate about the role that new housing construction has on costs for incumbent residents, especially low-income renters. One reason that tenant groups and Yimby advocates have clashed in some cities is that renter advocates have focused on the potential for renters to be displaced if a new luxury apartment building goes up next door. 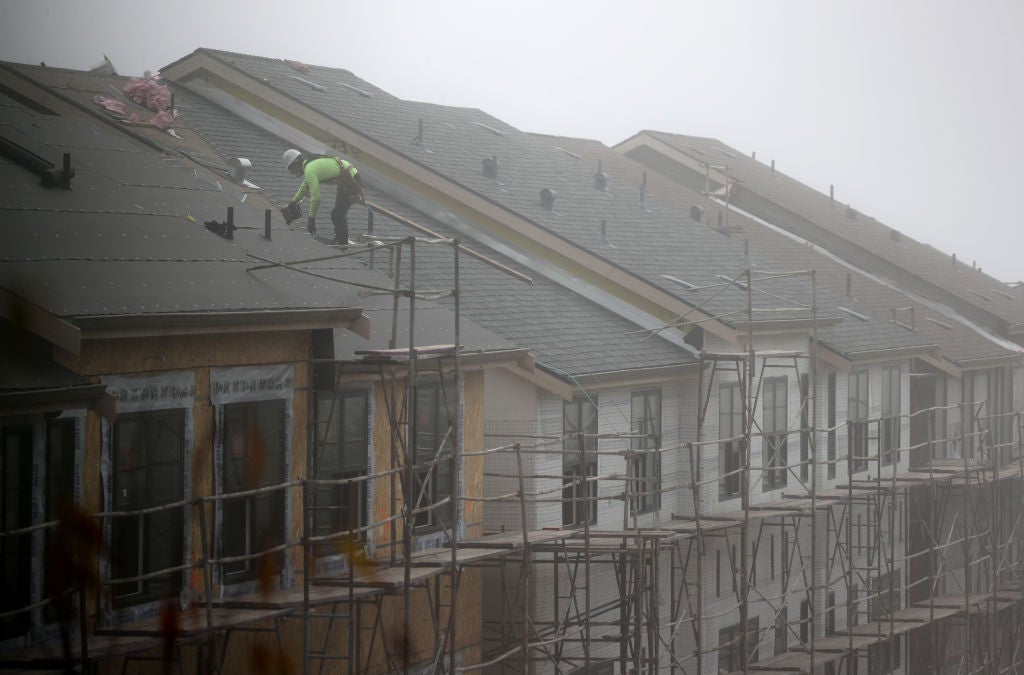 A worker stands on the roof of a new home under construction in South San Francisco. (Photo by Justin Sullivan/Getty Images)

Much of that activism has been fuelled by gut feeling and intuition rather than research – there simply haven’t been many studies that delve into the connection between new construction and rents in the immediate vicinity.

In recent years, however, that’s begun to change.

“Displacement and gentrification have been really acute issues for a long time, but it’s really difficult to get a causal handle on them,” says Kate Pennington, a PhD candidate at the UC Berkeley Department of Agricultural and Resource Economics.

Microdata on rents has historically been hard to come by, with many municipalities tracking home sale data but not rental costs. It’s also difficult to study individual people’s migration histories – where they wind up after a move and what motivated them.

“It’s only recently that researchers have been able to access the types of microdata needed in order to answer that type of question,” Pennington says.

There’s also the question of causation versus correlation when it comes to the effects of new construction on existing rents. After all, developers are likely to be building in areas that are already experiencing increased prices.

It doesn’t work to just look at a simple supply-and-demand graph, because housing is unique from other types of goods. Tony Damiano, University of Minnesota

Pennington hit upon an innovative way to get around this last limitation, analysing construction on parcels in San Francisco that recently suffered serious fires. This allowed her to study randomised lots of land across the city without looking merely at areas that were attracting fevered attention anyway.

She found that rents within 500m of a new project declined 1.2% to 2.3% and that the displacement risk – defined as moves to lower-income zip codes – was reduced by over 17%. Landlords of rent-regulated apartment buildings were a third less likely to issue eviction notices to tenants after new housing was built, though Pennington did not find that effect for residents of non-stabilised buildings.

Some of the beliefs of tenant groups were affirmed by her research. The areas she studied in San Francisco were likely to see a net increase in richer residents, which is how she defines gentrification. There was also a greater likelihood of building renovations and business turnover, signifying new amenities often aimed at higher-income residents, which fade to zero after 100m distance from a new project.

There has been a burst of similar research over the past couple of years. In 2019, researchers at the Upjohn Institute found that, based on Zillow listing data, rents in previously existing units in low-income neighbourhoods were 5% to 7% less than their nearby counterparts if they were within 250m of new construction. That same year, another Upjohn study found that new construction attracted wealthier residents from elsewhere in a city, often pulling them out of downmarket neighbourhoods where they then freed up homes that were more affordable.

But these studies do not delve into the question of housing market segmentation, a theory that argues there is no singular market for homes. Instead, it should be understood as a series of housing sub-markets wherein construction of new luxury units may do little for working-class or poor residents, whose landlords will presumably not be competing for tenants with an owner of a new luxury building.

“We often talk about units and housing as widgets, but I don’t think that’s right when you have such a diversity within the market,” says Tony Damiano, a PhD candidate at the Humphrey School of Public Affairs at the University of Minnesota. “We believe it doesn’t work to just look at a simple supply-and-demand graph, because housing is unique from other types of goods.”

Damiano and a co-author of a study analysed housing in Minneapolis between 2000 and 2018 using data purchased from CoStar Group, a commercial real estate analytics firm. In that context, they found that new buildings did not have a significant impact on rents when looking at the singular housing market. But after dividing into three sub-markets, they found that construction decreased rents by 3.2% at the highest third while increasing them by 6.6% at the lowest third (there was no effect in the middle).

But Damiano cautions that much of the building boom in Minneapolis really began in 2014 and 2015, meaning their paper largely cannot account for the medium to long-term effects of new construction. He explicitly does not cast doubt on the filtering process, by which more expensive homes become more affordable as they age, or the idea that more new housing in the region overall puts downward pressure on prices.

“You have to build enough housing for the people who want to live here; otherwise, prices are going to go up,” says Damiano. “Nothing in our research contradicts that fundamental assumption. We’re looking at things in very fine detail on small spatial scales and seeing that there are bumps in the road. Things don’t just work like you would expect in a textbook.” 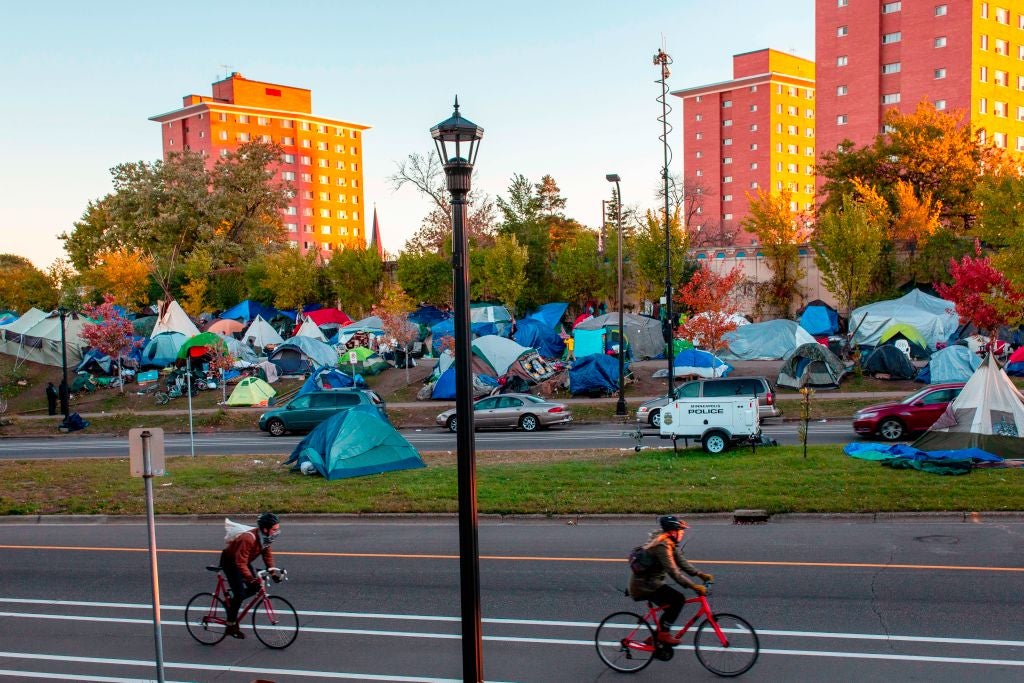 Cyclists pass a tent city near the Little Earth housing project in Minneapolis. (Photo by Kerem Yucel/AFP via Getty Images)

The only other recent study that definitively explores the segmented market is from the Furman Center, which used property tax data to measure how nascent New York City buildings over seven stories affected nearby rents from 2000 to 2017. She found an overall decline within 500ft of 1.6% but breaking the results into four sub-markets found that there the benefits were concentrated among the top three quartiles. There was no decrease outside the margin of error in rents for the lowest-income quartile. (It’s worth noting that all of these studies are working papers, which haven’t been peer-reviewed yet, so the exact numerical findings may change.) The Furman study also found an amenity effect, with new restaurants 9% more likely in the area around a new building.

Pennington also wonders if the findings in Damiano’s study, which is one of the only single-area research papers not to focus on a wealthy coastal city, could demonstrate that new housing construction has different effects in distinct kinds of cities.

“It re-emphasises a finding we’ve seen throughout the literature, which shows that if you put a shiny new building in a lower-income area, it could actually cause prices nearby to increase,” says Pennington. “But if you put a new building in an area where prices are already increasing, then it can help to bring them back down.”

Market-rate housing as part of the affordable-housing solution

Both authors argue that further protections and subsidies will be needed for lower-income residents. Damiano says that “just cause” renter protections could guard against the negative effects his study finds around new construction, making it more difficult to evict people for purely profit-seeking motives. Rent regulations should be studied as well, he says, although they are much more controversial.

Both just-cause protections and rent regulations have been subjects of increasing interest in US urban policy circles the past few years, while Joe Biden’s agenda includes more sustained attention to housing policy than has been true of any president in years. Included are several interventions that could address the vulnerability of lower-income renters, including making the housing voucher programme accessible to all who qualify, fully funding legal aid for eviction court and the creation of a $100bn Affordable Housing Fund. These could be especially important in tandem with proposals being considered to loosen zoning restrictions if renters are to be cushioned from potential rent increases in proximity to new construction.