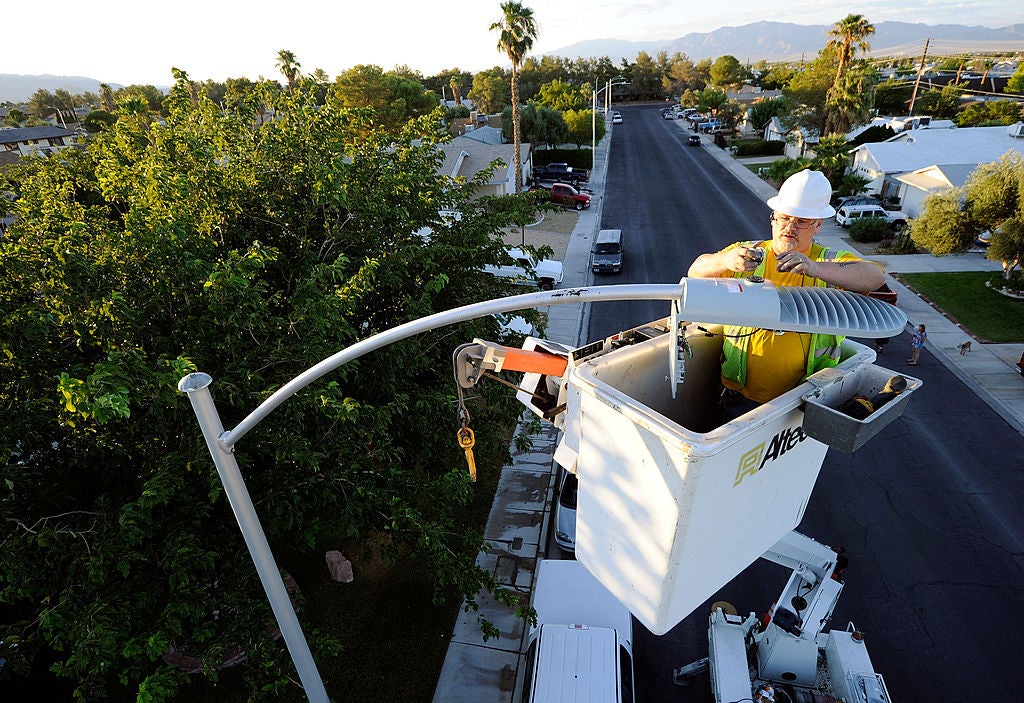 Smarter street lights are here to stay. Blind enthusiasm for smart-city technology across the board? Not so much. (Photo by Ethan Miller/Getty Images)

We’re not the first to argue that it may be time to retire the phrase “smart cities”, and the evidence of late suggests that the tech industry itself is waking up to the reality that it needs to rethink what and how it’s trying to sell to local governments.

Smart cities surfaced as a concept more than 20 years ago and served as an umbrella term to describe a large and varied set of emerging technologies that seemed destined to help metros operate more efficiently. The internet of things for municipalities has to date included everything from simple sensors that allow transportation engineers to track cycle lane usage to full-blown smart-city operations centres that brought to mind scenes from Minority Report.

By the middle of the past decade, it was common to see vast sums of grant funding made available to local governments that were keen to join the innovation bandwagon. Smart-city challenges spurred metros of all sizes to adopt new technologies, sometimes to the good but also, it now seems clear, for the sake of becoming a member of the growing global club of cutting-edge communities. Dozens if not hundreds of conferences, marketplaces and expos emerged to showcase the latest gee-whiz gadgets that cities could buy to transform themselves. To pursue a smart-city strategy was to be seen as relevant and forward-thinking, whether or not the problems a local government was aiming to solve would necessarily be best served by an expensive new monitoring system or software package.

Criticism of the culture of the smart city predates the coronavirus pandemic. Concerns around privacy, of who should own or control public data and to what extent technology is always the answer could be heard loud and clear at least a couple of years before Covid-19 changed the world. Backlash against the practices of companies like Amazon and Facebook helped spur the grassroots movement that ultimately contributed to the cancellation in May of a major Sidewalk Labs project in Toronto. That the urban-innovations unit embedded within Google’s parent company cited economic uncertainty amid the onset of the pandemic as its reason for changing course was almost beside the point – the Quayside plan had already been scaled down so significantly in the face of community pressure that its viability was no longer clear.

The pandemic took much of the remaining air out of the smart-cities bubble. Last summer, City Monitor reported that more smart-city project deployments would be delayed or scrapped in the face of budget and revenue uncertainty, and that city governments were in the midst of shifting their priorities towards economic recovery and digital equity. Since then, one of the industry’s biggest players, Cisco, announced it would pull the plug on its flagship smart-city software.

In 2021, the idea that the goal of every city should be to get smarter feels painfully out of touch.

“Obviously, a lot has changed. In this moment, the big vendors are in the midst of a pivot,” says Nigel Jacob, co-chair and co-founder of the Mayor’s Office of New Urban Mechanics, a civic-innovation incubator and R&D lab within Boston’s city hall. “They’ve all seen the challenges and the opportunities in this pandemic moment. We work very closely with some big companies, and I think they are still struggling and looking at their product portfolio and looking to see what value they can add. I do think the field has shifted.

“When I look at some of the products that are coming from the large vendors, they were all being developed in the context of normal operating procedures. And that just isn’t true anymore, and maybe never again?”

The pandemic’s effects on the smart-cities sector

A City Monitor analysis of global smart-city deployments makes it clear that the eruption of Covid-19 in 2020 did stall the sector’s momentum. The cumulative number of these projects initiated worldwide increased significantly between 2011 and 2019. By 2019, there were 379 fully deployed smart-city projects in 61 countries. In 2020, just 16 countries set in motion a total of 34.

The trend becomes even clearer when broken down by region. Europe has long led the way in terms of the quantity of smart-city deployments. Project commencements rose swiftly in Europe between 2011 and 2016, from only two to 43 initiated annually. Since 2016, Europe has added 149.

Meanwhile, the country with the most deployments to date is the US with 79. The larger North America region has 90.

Both Europe and North America saw significant dips in the number of smart-city deployments in 2020, while other regions remained a bit steadier.

Australia, Germany and Italy were the only countries that had more smart-city deployments in 2020 than they did in 2019. Australia had the most of any country in 2020 – seven – up from six in 2019. It’s notable here that Australia is one of the few countries that have been able to control the spread of Covid-19.

When examined through the lens of the major suppliers to government-funded smart-city projects, 2020 looks even more like a sea change.

Of the top five global suppliers of such undertakings, only one deployed any in 2020.

The case against the phrase

A further obstacle to the global movement towards smart cities may be the name itself. Even before the pandemic, it wasn’t a particularly descriptive term. What does it actually mean, which technologies count as “smart”, and why did this sector deserve so much attention? These questions were all present prior to 2020. In 2021, the idea that the goal of every city should be to get smarter feels painfully out of touch.

This isn’t to suggest that no useful or important smart technologies have been deployed over the past decade. Many are clearly here to stay. There’s a great deal of consensus at this point, for example, that intelligent street-lighting systems combined with LED bulbs – which enable cities to brighten or dim street lamps based on usage – are both cost-effective and vastly more sustainable. It’s also clear that no city will be able to meaningfully tackle its emissions goals without the widespread adoption of smart meters and digitised grids.

But as with so many other aspects of life on our planet over the past year, it is starting to feel like the end of an era.

“Part of it is that people are sick of talking about this term, ‘smart cities’,” says Story Bellows, a partner at the urban-change management consultancy Cityfi. “People are more focused now on creating outcomes in their communities, whether that’s using technology, whether that’s reinventing processes – kind of the layering of all of those various approaches to making meaningful change on key indicators, whether it’s on health or equity or whatever it is. I think there are still a lot of potential technology drivers and contributors in that, but creating a business model of smart cities just on its own, especially within some of these really big companies, it’s hard to really operationalise and execute.”

In Boston, Jacob notes that some of the companies he’s seen have more success selling technologies to local governments over the past year are in fact start-ups or smaller companies that are coming up with pinpointed solutions to very distinct, often urgent problems. These include products aimed at coordinating resources during the crisis, like volunteer management systems designed to help get food to the people who need it. Not all of these more specific pandemic-era efforts have been successful: the sheer number of failed contact-tracing apps and broken vaccine appointment-scheduling platforms is a testament to how easily newcomers to the cities sector can guess incorrectly about what’s needed. But what they had going for them was specificity and a sense of importance.

“With the exception of straight-on climate change issues, in general in smart cities, we’re not actually tackling the big issues,” Jacob says. “And the big issues have all been thrust out into the open now through the pandemic. Racism, inequality – that sort of thing. We’re just beginning to see people grapple with that. Planners are starting to wade into this, but I’ve not seen anyone dig into it and say, ‘These are anti-racism sensors.’”

Sensors aren’t going away, both Bellows and Jacob say, but companies seeking to sell tech to local governments will need a sharper sales pitch beyond just being “smart”. One sensor-based solution Jacob suspects would be quite welcome?