From the super-connected urban sprawl of Tokyo to the futuristic skyline of Dubai, digital acceleration had fast become an aspiration for many city authorities long before the Covid-19 crisis hit. The United Nations estimates that 68% of the world’s population will live in urban areas by 2050. The pandemic has highlighted the need for accelerated digital city planning and greater communication with citizens for such population levels to be sustainable. 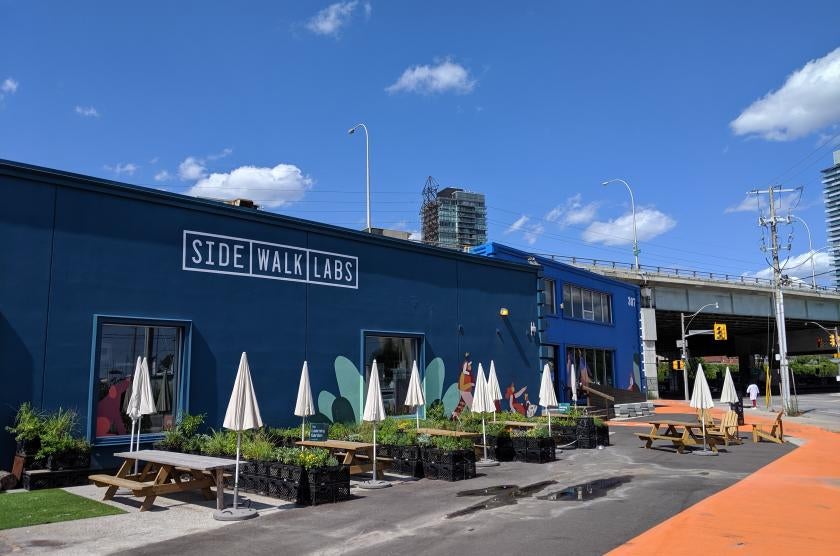 Sidewalk Labs abandoned its Waterfront Toronto project in May. (Photo by STR/AFP via Getty Images)

But Sidewalk Lab’s decision in May to abruptly end its Waterfront Toronto “smart city” project, citing economic pressures of the global pandemic, has prompted questions about whether other projects may follow suit – or whether city authorities will instead double down on digital investment to accommodate new ways of working and living as well as combating the post-pandemic economic fallout.

The mayor of London’s chief digital officer, Theo Blackwell, acknowledges public-sector budgets will need to be revaluated post-Covid-19. “Projects will need cast-iron business cases going forward,” he says. “On the other hand, increased concern around public health and the way smart projects can help with gathering data becomes equally important; it remains to be seen how that is funded.”

Instead of stalling projects in the wake of the Covid-19 crisis, London repurposed existing projects, including an air quality sensor network that pivoted mid-pandemic. Initially, the data provided a picture of observance to lockdown rules using image processing algorithms to assess vehicle, cyclist and pedestrian numbers. “Understanding the economic impact on the high street will give decision-makers better insights into future funding decisions to assist in the recovery, whether we need to intervene in one part of London compared with another,” Blackwell says.

Public- and private-sector goodwill during the pandemic from partners Microsoft and the Turing Institute mean that the project constitutes a sizable team, Blackwell adds. “This will be really important when we’re talking about things such as localised lockdowns, especially in a city the size and complexity of London,” he says.

In a talk given to the Public Sector Network in April, Leo de Sousa, Vancouver’s deputy chief information officer, said the crisis had forced city officials there to accelerate a smart-city project with remote working highest on the digitalisation agenda. “Our geographic information system transformation and enterprise data and analytics programmes were leveraged to provide critical support,” he added.

Vancouver’s four-year technology plan, with programmes for major investment, will go forward focusing on small pilots for innovation, according to de Sousa. He stated in the talk that the investments will provide significant cost savings in the post-Covid-19 economic downturn, including a smart-city LED lighting system and the shift to remote working, which de Sousa said has the potential to save significant sums on leased office spaces.

Councillor Sean Fielding, who oversees digitisation for Oldham Council in the northwest of England, says the pandemic has moved city digitisation up the agenda. “Other leaders around the table at the greater-Manchester council have become more attuned to the economic benefits of accelerated digitisation,” he says.

With so much uncertainty around budgets, Fielding says it remains unclear where digitisation lies in the budgetary hierarchy. “I think we’re going to have a really challenging time ahead if the government tries to recoup some of the finances spent on responding to Covid,” he adds. Nevertheless, Fielding says he will continue to make the case for digitisation projects, adding: “I think there’s a stronger case now than ever, but I can’t say that everybody’s going share that view.”

Clare Wildfire, global practice lead for cities at engineering, management and development consultancy Mott MacDonald, has seen a deeper understanding of the benefits of city digitisation over the past five years which she says is particularly pertinent during a pandemic. “Covid offers proof of the benefits of smart cities because cities with a digital platform in place, able to collect and analyse data, can more rapidly understand where adjustments need applying,” says Wildfire.

So what lessons will be learned from the pandemic? Andy Moulds, Mott MacDonald’s head of information advisory for smart infrastructure, says small pilots leading to scalable solutions with an organic approach are preferable to sweeping policy changes. “Local authorities and other infrastructure owners ­­­– unless they have major investment programmes – are typically doing small pilots that provide a better understanding of what works,” he says.

Smart-city development may see an investment shortfall in the near term, according to Gartner analyst Bettina Tratz-Ryan. “Everybody is hurting financially,” she says. “Some projects will be postponed or scaled down but will prevail and accelerate post-Covid. Smart cities are a way to dig ourselves out of the crisis by using data to look at operational efficiencies with data-driven solutions.”

Gartner predicts that by 2022, digitisation, or the internet of things, will save consumers and businesses $1 trillion a year in maintenance, services and consumables on a global level. With such a compelling business case, the main risk to projects such as Waterfront Toronto, which faced a public backlash against a perceived lack of consultation around data privacy, is a digital-citizen equity gap, according to Tratz-Ryan.

“Cities that have been elitist in terms of smart-city technology, that have failed to address data literacy and equity, are now feeling the heat because on the one hand we have these apps, tracking devices, registrations and everything to open business and conduct our daily lives,” she says. “But the failure of connecting the value of data solutions to the individual will hamper large-scale technology and data-driven deployments – equity and data privacy goes hand in hand in the aftermath of the pandemic.”

This point is echoed by the secretary general of the smart-city networking organisation Eurocities, Anna Lisa Boni. “The crisis has boosted the use and development of digital tools in cities, especially in public services,” she says. “At the same time, it made clear that digital is not just about IT infrastructure but also about organisational and civic maturity, transparent data usage and trust. And we have seen the discriminatory effects of the digital divide in terms of access to the internet and skills. Stretched city budgets will now focus both on smart-city investments and the fight for digital inclusion to make society more resilient.”

*This story has been updated to correct the spelling of the name of Vancouver’s deputy chief information officer, Leo de Sousa, as well as to clarify when and where his comments were made.