For the past week, millions of American citizens have been living under nightly curfews.

Last weekend, largely non-violent protests in the wake of the police killing of George Floyd in Minneapolis spilled over into more widespread unrest. From Los Angeles to Philadelphia, many major American cities experienced looting and violent upheaval. City leaders say they turned to curfews as a means to restore order and limit the capacity of crowds at night. 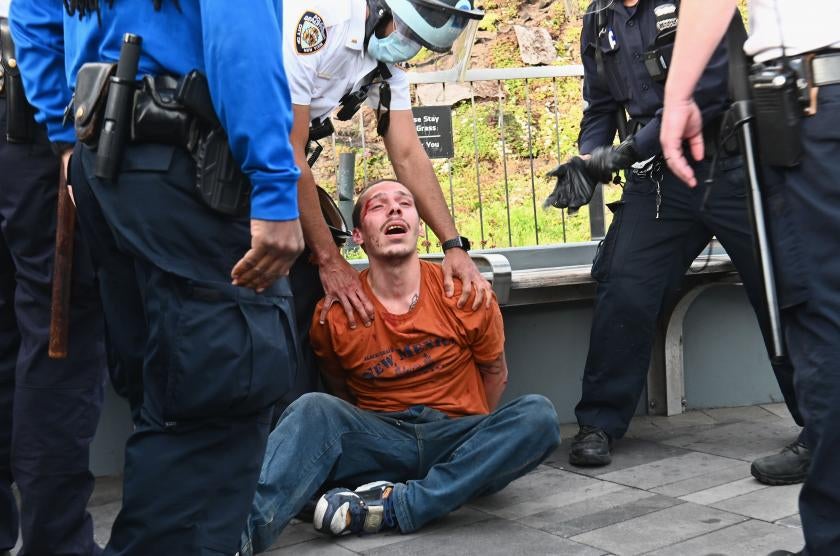 And they’ve kept on making that argument as the week wore on.

“In the context of crisis, in the context of curfew, there is a point where enough is enough,” New York City Mayor Bill de Blasio told reporters on Thursday. “If officers say now is the point we need you to go home, it’s time to go home.”

But experts on law enforcement and civil liberties say they have concerns about curfew policies, especially in the current environment of heightened tensions between police and the communities they are sworn to serve.

Political activists and city residents say that the curfews have proven to be oppressive, and selectively enforced in troubling ways. On the Upper West Side of Manhattan, the Broadway composer and singer Shaina Taub, along with her husband, reported being arrested for standing on the stoop of their apartment building and cheering on a passing protest. In Minneapolis, a family filmed their experience of being shot with paint canisters by law enforcement while standing on their porch.

In Philadelphia, an activist reported being arrested for being out after curfew near his home, briefly jailed miles away, and then forced to walk back in the middle of the night in fear of being re-arrested for breaking curfew. A journalist in the city was also arrested for violating the city’s policy, despite the “essential” status that exempts reporters and an array of other workers from the restrictions.

“If a city wants to create a curfew, it has to have a continued security-related justification for it,” says Jonathan Zimmerman, a professor of history at the University of Pennsylvania who has studied juvenile curfews. “If it didn’t, you could use that to squelch protest. Is this really a way to protect all of our citizens? Or as in the case of what’s happened in Kashmir, and in many other places, is it just a way to keep a certain population at bay or under surveillance?”

Such concerns have resulted in the easing of curfews in cities such as San Francisco and Seattle, where business owners joined activist groups in pressuring city leaders to eliminate the policy. But in New York, Chicago, and Philadelphia – three of America’s most populous cities – curfews continued through the weekend.

Advocates of curfews argue that they can be useful in emergency situations to maintain law and order. Their most common use in the United States is during or immediately after natural disasters, such as Hurricane Katrina. In these situations authorities often impose curfews because they want to keep residents indoors during dangerous weather and because they fear a surge in criminal activity during tragedies. In the aftermath of Hurricane Irma in 2017 the Palm Beach Post reported that  a curfew put in place in Palm Beach Country, Florida, appeared to be being unevenly enforced, with black residents bearing the brunt of the stops.

Allen Owen is the former mayor of Missouri City, Texas, and during Hurricane Harvey in 2017 he imposed a curfew on his city. Hundreds of houses suffered extensive flooding, and he recalls 1,300-foot-high water rescues of citizens under his jurisdiction. The National Guard was called in, and curfew instituted.

“You do that typically to protect your own citizens when you have situations where you have disasters and people leave their homes, that’s when burglaries go up,” says Owen, who is now retired. “It’s typically not people who live within your city, it’s people who want to travel into your city and take advantage of citizens not being at home. So, typically, you’ll give an evacuation order and ask people to leave their homes and then you put a curfew in place.”

Owen says he sees similar reasoning behind the current curfews across the US in the past week. The policy is needed to protect property owners and other residents, he says.

“It gives police officers the authority to regulate who comes and goes,” Owen says. “Unfortunately a lot of this is happening late at night and early in the morning. What are you doing on the street at 2 o’clock in the morning?”

There is little existing research on the effects of curfews during emergency situations in nations with traditionally strong democratic norms. (There are plenty of studies of juvenile-only curfews, which have almost universally been found to be devoid of value.) But in middle-income democracies such as India, Turkey and South Africa, researchers  have found curfews to be inequitably enforced, often targeting minority groups and political dissidents.

“The views of persons subjected to curfews, especially highly restrictive and prolonged curfews, have hardly ever—indeed perhaps never—been surveyed,” wrote Paul Brass, a professor at the University of Washington who studied collective violence before his retirement.

“Their effectiveness in achieving the stated goals of restoring quiet and calm has also not been assessed,” Brass wrote in 2006, in one of the few formal studies on the policy. “Least of all has it been noticed that curfews may be used as means of control, victimization, and outright violence against targeted groups rather than as devices to bring peace for the benefit of all.”

Although Brass’s paper mostly focuses on the experiences of Muslims in riot-prone Indian states, who are far more punitively policed under curfew, he also mentions the practice’s use in the United States as a means of social control of African Americans. A recent op-ed in the Washington Post by Christopher Petrella highlighted the pervasive use of curfews targeted at black people in America, from colonial times onwards. (He notes, for example, an early 1700s Boston ordinance banning “all Negro and Molatto Servants” from the streets after 9:00 at night.)

Brass specifically cites the 1960s uprisings, a favourite point of comparison today, as the last time curfews were imposed widely across the country.  More recently curfews were imposed in the wake of the Rodney King case in Los Angeles, the 2001 riots in reaction to police brutality in Cincinnati, and in Ferguson and Baltimore in 2015.

The turbulence of the past week could prompt new research into curfews as a policy of public safety and social control. But there are practical barriers to such research, which is perhaps why there aren’t more studies of them already.

“From a social science point of view, these are abrupt events that you’re not ready to run out into the field and start researching when they happen,” says Kenneth Adams, professor of criminal justice at the University of Central Florida. “Because their use dates way, way back in time and they’re considered on the face of it to be effective.”

The efficacy and constitutionality of the curfews is being increasingly questioned, however. In Washington, DC, 300 people were arrested for violating curfew on Monday night, most of them peacefully protesting. On Tuesday night, thousands of protesters were trapped on the Manhattan Bridge for hours by police because they were marching in violation of curfew. Police arrested 269 people for violating curfew in New York on Thursday night alone, amid an increasing chorus of political officials calling for the policy’s end. On Friday, the Pennsylvania ACLU demanded evidence that justified the maintenance of the Philadelphia curfew, which was extended again with no explanation, with 492 people arrested for violating the restrictions since Saturday.

The use of curfews in the midst of intense civil unrest can be a useful means of tamping down violence and looting, argues Stephen Downing, a retired deputy chief with the Los Angeles Police Department. He experienced the Watts uprising of 1965 as a young policeman and remembers the curfew as an act of desperation on the part of the authorities, who had not dealt with unrest on such a scale before.

“Finally, after they called in the National Guard, they realized that a curfew might serve a purpose,” remembers Downing. “When you announce a curfew, then you can go in with the curfew enforcement ability and you can really hammer down on the looters, the ones that are roaming, looking to smash and burn.”

But Downing says the contemporary curfews in many American cities seem less clear cut. A policy as sweeping as this should be carefully evaluated day-by-day, not just instituted for a week-long period. After all, the protests after the weekend have been almost entirely peaceful and even the worst of the violence did not compare to the destruction and death of the 1960s.

If such policies are going to be imposed, the reasoning for the curfew has to be explained clearly and succinctly, Downing says. In his home of Long Beach earlier in the week, he says that authorities pinged residents’ phones repeatedly with alerts for different curfew times. No explanation was given. The hours of many big-city curfews have been pushed back and forth as well, with little reasoning given.

“They’re always changing, but they never say why,” says Downing. “They’re not selling it to the people. So pretty soon, they’re not going to have the support of the people for their willy-nilly curfews and they’re going to have another uprising.”