Rick Perlstein is the doyen of modern American conservative history. Starting in 2001, he has chronicled the rise of the right-wing movements that have dominated American life since the 1980s, documenting their defeat of mid-century liberalism and clashes with other progressive groups (and each other). 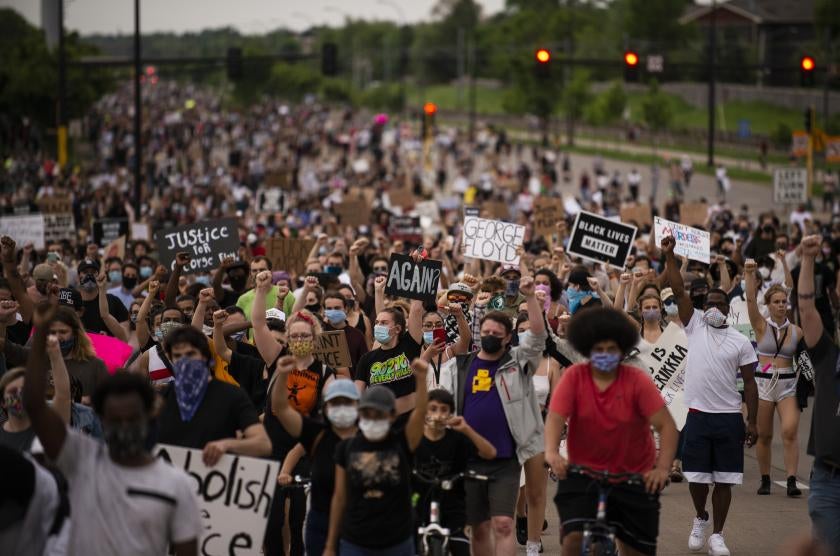 Protesters march in Minneapolis while decrying the killing of George Floyd. (Photo by Stephen Maturen/Getty Images)

In his 2009 book Nixonland, he describes the Republican Party’s successful law-and-order campaign in 1968 and assiduously combs through the urban uprisings of the 1960s, highlighting the bloody unrest in Newark and Detroit. The last chapter in his chronicle of conservatism, Reaganland: America’s Right Turn 1976-1980, will be published in August.

As America’s cities once again become arenas of protest and unrest, City Monitor spoke with Perlstein about whether there is value in comparing today’s situation to 1968, why leaders love to blame “outside agitators” during times of civil upheaval, and the limits of law-and-order politics. This conversation has been edited for length and clarity.

Let’s start with the obvious historical analogy everyone’s making to the big wave of protests and unrest that hit over 100 American cities after the assassination of Martin Luther King Jr.

After doing many interviews and writing an article that was assigned to me within minutes of the first uprising, I’ve been asking why this is the obvious comparison. I think people are really focused on presidential elections when it comes to thinking about history. And, of course, 1968 was a presidential year and Nixon made a law-and-order message central to his appeal to voters. Donald Trump has quite explicitly made the same language central to his appeal to voters in 2020. I wonder if this is another example where we’re chasing around after Donald Trump’s whims. He’s telling us to think of 1968.

I’ve also been thinking of a lot of other comparisons and finding it intellectually and politically telling that people think about some disturbances in American history and not others. We’re not thinking about the riots in San Francisco in 1979, when a former city council member assassinated Harvey Milk and the mayor, George Moscone. The next year he was convicted of a much more minor crime. Gay folks rioted, burned out 20 cars, including 12 police cars, at City Hall. Then when they went back to the Castro, the police followed them and started methodically beating people for two hours.

I haven’t heard that mentioned once. But when you’re talking about an uprising about not only police misconduct, but the kind of vigilante police rioting we’re seeing now, that one comes to mind too. When we talk about rioting in the 1960s and 1968, it was almost exclusively African Americans burning and looting and demonstrating in the impoverished neighbourhoods where they lived. Whereas now we’re seeing actions tending to center in [downtowns] and a multicultural movement that drafts off 10 years of organising, at least, since the police killing of Oscar Grant in Oakland. To me, that looks a lot more like the WTO protests in 1999 than anything we saw in 1968.

Absolutely. In Nixonland, I tell a story that was relayed to me by a friend of mine who was producing some of that street footage for NBC News in 1968. It showed cops, unprovoked, beating demonstrators who are sitting down in the street and then doing things like throwing them into police wagons, throwing tear gas canisters in, and closing the doors. Basically, torture. Then police attacking reporters systematically.

The story my friend tells, which is so revealing, is that he’s manning the switchboard at NBC headquarters in Chicago and he thought that what he had just witnessed was this kind of moral tableau that was a lot like Selma in 1965, Birmingham in 1963. He thought people would grasp that police were the malefactors. Instead people were calling him and attacking NBC for not reporting that the demonstrators must have been attacking the police.

Subsequent opinion polling overwhelmingly supported the conclusion that people blamed the demonstrators and trusted the police implicitly. But now we have polls [showing the opposite]. We’re seeing Lachlan Murdoch of Fox News imploring his reporters to show empathy to the anguish people are feeling about George Floyd. We see Los Angeles immediately responding by cutting $150 million out of the police budget. Now, there’s quite sympathetic coverage of the anger that people are feeling.

There’s been a lot of attention paid to this political science research out of Princeton on the effects of non-violent civil rights protests in the 1960s, which found that voters who were subject to crackdowns by the police broke for more liberal candidates. When voters were exposed more to violent protests, they moved toward conservative candidates. But in the past week, I don’t know how you would disaggregate all those things.

This is a caution I’ve been asking people to take into consideration. I’m really excited and happy that people are using history to try and better understand the present. But thinking about history can also be a way to evade the present and not look at what’s happening right in front of our nose. The fact of the matter is, we don’t have a good picture of any of this. What we need right now is journalism. We’ll have time to make these kinds of historical reflections later. We need to understand what motivates people. That’s what’s going to inform our political action going forward.

How do you think the bifurcated media environment of today plays into all this?  The ’60s was an era of huge media institutions that dominated their regions, and the nation in some cases – a real, actual mainstream media. Whereas now it’s a far more splintered media environment.

Back then you had a very top-down media. Three networks, two wires services and a couple of big metropolitan newspapers that set the agenda. In 1967, there were absolutely awful riots in Newark that were contained then, subsequent to their containment, people were massacred by the police. One of the martyrs was a beloved community figure named “Uncle Daddy” Harrison, a complete bystander, who was cut down by police. CBS News covered his funeral, which is this really moving, galvanising community event. But the executives wouldn’t let them show it because they didn’t want to portray rioters sympathetically.

[Today] we have a media that’s actually much more prepared to entertain the idea that the police have bad guys, that’s one change. We also have the citizen journalism of people documenting things on Twitter, like the family on their porch [being shot at by officers], which makes it a lot easier to kind of see the absolutely outrageous police rioting.

You mentioned the death toll in Newark and I have to say, when I read Nixonland that made a really big impression on me. I hadn’t realised that most of the people who died in the unrest in Newark or Detroit in the 1960s were black people who were gunned down shot by the police or the National Guard.

Right, because the National Guard [in the 1960s was] often these rural kids who are in the Guard because they don’t want to go to Vietnam and don’t really particularly appreciate being forced into harm’s way. They might be racist, or at least unfamiliar with the city, and terrified and poorly trained. They burned out the barrels of their guns, shooting at a muzzle flash that turned out to be another guardsman who they thought was a sniper. Actually, ironically enough, we’re talking about Donald Trump calling up the military. Well, the military actually saved lives in Detroit because they actually were trained and had discipline.

I want to talk about another difference, which is important for people to understand. Police cruelty, police vengeance, and police racism is quite similar, but police tactics have certainly improved. This is a time before they figured out that they could use non-lethal methods of crowd control. Garry Wills wrote a whole book called Arming for Armageddon, about all sides militarisation in 1967 and 1968, and he writes about police tacticians figuring out how to keep a riot contained in a certain neighbourhood. Chemical mace was a new invention, which is very ugly and very dangerous, but certainly beats a shotgun blast into a crowd of people. That’s one of the reasons why we don’t have something like the death toll of 71 people that happened in 1967.

Another point of comparison are all these claims about outside agitators. These claims were made by enemies of the civil rights movement, who blamed everything on outside agitators like communists for supposedly being behind Martin Luther King Jr. Those claims were also made about urban unrest in 1965 in Watts, Los Angeles, when of course, that was not the case at all.

Lyndon Johnson screamed at his CIA director Richard Helms when he came back with a report showing that communists were not behind the revolt. It’s a perennial. I’m researching all these riots and that’s the first thing public officials always say. Dianne Feinstein, who was the mayor of San Francisco, blamed the White Night riots in the Castro and at City Hall on outside agitators. That’s a pretty hard case to make. Where would these outside agitators be coming from, when San Francisco is obviously the epicenter of the gay world at that time?

In Watts, it was automatically presumed that these must be communist instigators. It’s part of that structural component of American political culture that America is always innocent. If anything untoward or violent or divisive happens it must somehow come from agents outside wherever the disturbance happens.

You have to interrogate the phrase. What is an outside agitator? We’re all Americans. Let’s say someone organises people to engage in civil disobedience in Baltimore, and they’re not from Baltimore. I mean, you have got to ask what’s wrong with that? Why is that illegitimate? This affects all of us, there’s no outsider to this crisis.

Some people have argued that looting or violent protests will benefit Trump. The president himself seems to be banking on that as he cos-plays as Richard Nixon. What do you think people are misunderstanding about law-and-order politics when they make that claim?

You can’t trade on people’s fear of disorder if the same voters hold you responsible for either creating or preserving disorder. As the survey evidence is revealing to us day by day, people are blaming Donald Trump, at least partially, for making this ugliness happen. It’s just not a credible argument to tell to voters that reelecting me will end the conditions that occurred following the last time you elected me.

Richard Nixon, of course, was challenging an incumbent party. It was a unique situation where there had been this new wave of social legislation intended to benefit minorities and poor people, which the Republican Party tried to convince people had caused more disorder instead of less. Whether that was correct or not, it was a credible argument to make to the electorate. It’s much harder to make that argument now. It might have been a one-time trick.

Your new book comes out this summer. Are you also planning a book on the Trump years or anything like that?

I’m not, actually. I write history in order to give people frames to more broadly understand the present. That really is what gives me pleasure. I’m actually thinking about going back to the early industrial-era to think about how markets, industrialism, and wage labour transformed the world. I’m going to leave Trumpland to the next generation to take on.