The police killing of George Floyd, and the protest movement that emerged from it, has reinvigorated a national conversation around reinventing criminal-justice policy in the US. 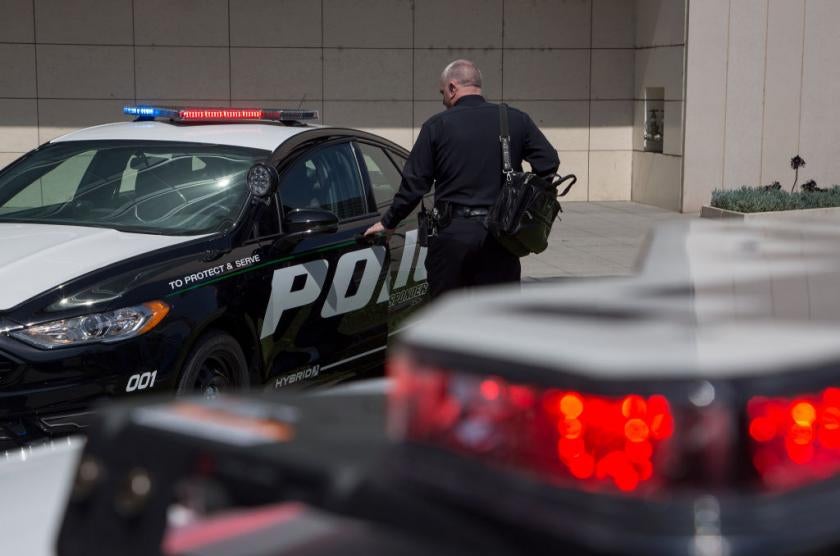 “I see an awareness that has developed in the black community in the last ten years or so about how deeply racist the criminal justice system has become,” James Forman Jr says. (Photo by David McNew/Getty Images)

At the same time, reports that violent crime is rising in many US cities have resurrected talk of the much-disputed “Ferguson effect”, a theory put forward by law enforcement professionals, and some researchers, who argued that police slowdowns in the wake of the first wave of Black Lives Matter protests resulted in elevated rates of violent crime. President Donald Trump is trying to weaponise this narrative, paired with images of federal officers clashing with protesters in the streets of Portland, to wage a 1968-style backlash election campaign.

“People who want to mobilise a lock-them-up style of either policing or prosecution have tried to weaponise those short-term increases,” says James Forman Jr, a professor of law at Yale Law School. “Criminologists will say you have to be very, very cautious about short-term movement [in crime statistics]. We don’t know whether or not what we’re seeing right now [with violent crime increasing] is going to sustain itself. But the fact is, it’s here and people are talking about it.”

In 2018, Forman won the Pulitzer Prize in nonfiction for his book Locking Up Our Own: Crime and Punishment in Black America. Drawing on his experience as a public defender in Washington, DC, he traced the emergence of anti-crime politics in late-20th-century black communities. Forman showed how newly empowered black politicians fought for policies they believed would protect and uplift black Americans but inadvertently contributed to mass incarceration.

City Monitor recently caught up with Forman to discuss crime trends, where he sees reason for hope in this moment and how the black political class’s attitude toward crime and punishment has shifted since the latter part of the 20th century.

This interview has been edited and condensed.

There is talk right now about a resurgence of crime and violence in American cities. We saw similar, more localised concerns after the initial 2015 Black Lives Matter protests in Ferguson and Baltimore. Do you fear this could reinvigorate the kind of politics you describe in your book among segments of the black community and political class?

James Forman Jr: I fear that it could be reinvigorated nationally and also in the black political class. Look at the political conversations that are happening in Atlanta right now, for example, a city that also has seen a short-term uptick in crime, as it is a site of a lot of protests about George Floyd and Breonna Taylor on the national level as well as Rayshard Brooks and Ahmaud Arbery more locally in Georgia.

I think that you can already see in some of the language of the local elected officials this idea that we have to be very careful about pulling back. [They are saying], “While the protesters may make some valid points, we can’t risk returning to the ’80s and ’90s.” Those decades really traumatised the US, and particularly traumatised black communities. There’s a deep fear about returning to the levels of the violence that we saw in the crack years.

You write a lot about class divides among black Americans, where middle-income and elite black people don’t suffer as much from extremely punitive policies. They also have closer ties to the politicians who are creating these policies. There are very specific groups of people, even in marginalised communities, whose voices are heard. As a result of these dynamics, you write about black politicians fighting for things like mandatory-minimum prison sentences or against decriminalising marijuana. Is there still that disconnect between those who suffer the most from criminal-justice policies and those who are actually heard in political discourse?

Let me just say a caveat, that when we talk about class divisions in the black community, it’s important to hold two truths in our head at the same time. Bruce Western and others have shown the way in which class, educational status, income can dramatically reduce the likelihood of being hardest hit by the criminal system – namely incarcerated. Middle-class and upper-middle-class black people get some measure of protection. It’s also true at the same time that black people of all classes are worse off relative to their class counterparts in the white community.

One area where class is least protective is policing and police stops. The police do not know how many degrees you have. They don’t know how much money you have in your bank account. I want to be very clear that in making this point about class, I’m not making the argument that race or racism don’t matter in this context.

In terms of how it plays out now, I see an awareness that has developed in the black community in the last ten years or so about how deeply racist the criminal justice system has become. Twenty or 30 years ago, they had a consciousness, but there’s levels of understanding. Many of the people I write about in the book wanted to promote the interests of the black community. They weren’t motivated by indifference or callousness. When presented with mounting evidence of how awful this system has been in black lives, they’re reconsidering and recalibrating.

The second thing that has affected the black political class has been the emerging movements, led by black people in particular and led by young people. They not only educated leaders but pressured them and made them understand that there is a political cost. If you’re not moved by the moral argument, then you’ll be moved by the political argument. You’ll be moved by the people protesting outside the office of District Attorney Jackie Lacey in Los Angeles, for example, where Black Lives Matter LA has held, I believe, a year of consecutive protests against a black district attorney who has had really some of the worst practices.

From what I can tell, she’s been pressured by the movement to change some of her positions on important issues like prosecution of low-level drug offenders, for example, and the aggressiveness with which she prosecutes police officers for acts of violence.

What do you make of the calls to defend or even abolish the police?

What I find so compelling about abolition, initially in the prison context and extended to the police as well, is that it shifts the conversation and forces us to go through experiments in which we imagine what it would take to build that world. I think that exercise is very important because it pushes us further than we are naturally inclined to go. Cultivating a broader imagination is an incredibly important part of this work, because as you know from my book, often it was a lack of imagination that caused people to fall back on [punitive policies].

That’s what caused DC Councilmember David Clarke to call the police rather than public-health experts when he was overwhelmed with letters about heroin addicts in public space. He was [part of the] anti-drug war, but he couldn’t imagine responding to a call for help with heroin addicts with anything other than police. That’s a very common move from even really good and progressive people.

People who are for defunding, for abolition, are absolutely right about reinvesting that money into alternative structures that support communities. But the reinvestment part doesn’t follow naturally from the terms. We might want to come up with a term that captures the new stuff we want to do. I think that’s particularly important because one of the reasons black communities have ended up supporting more police is that black communities have always wanted their fair share of the resources.

Then, the evidence suggests the US has too many police officers doing prophylactic, preventative or stop-and-frisk-style policing. The style of policing that leads to district-level harassment, pulling people over for no reason. But we have too little investment in the parts of police departments that investigate unsolved crimes. I’m talking about the investigator or the detective who comes to your house after there’s been a robbery, an assault, a rape or homicide.

As compared with European countries, in the US we actually underinvest in those parts of our police departments. Jill Leovy’s book Ghettoside shows this in dramatic detail. She describes an LAPD that’s stopping and frisking black drivers wantonly and yet the homicide detectives are still relying on a fax machine, and the fax machine is broken. They have to go with their own money to Staples to buy a printer. Meanwhile, other aspects of the department are kitted out in this ridiculous riot gear that makes them look like they’re in Fallujah.

That underinvestment is particularly damaging to black communities because we’re disproportionately victimised by crime. Because of racism and this allocation of resources, the police are less likely to respond in black communities. The kids I used to work with in the charter schools in DC, we talk about no snitching, but one of the reasons they would never call the police after they’d been victimised by crime is, they would say, “They’re not even going to come. You’re wasting time.”

I did a Q&A with Jill Leovy too, and her argument is one I’ve struggled to articulate in our present moment. She argues the state doesn’t have a monopoly on violence in low-income black neighbourhoods because investigations of violence are de-emphasised and crime victims or their loved ones often take retribution into their own hands. But right now, establishing or preserving the state’s monopoly on violence isn’t an appealing talking point.

Yes, this is another thing nobody’s talking about. Whatever we’re going to do instead of the police has to be accountable to the public. The best, most direct way to have accountability is to have the individuals be public employees. As long as we have 300 million guns in this country, at least some of those state employees are going to themselves be armed. It’s unreasonable to ask them to do the job without it. Not as many need to be armed as are armed now, but some of them need to be. But they can’t be hiding behind union contracts or civil-service protections, which make it impossible to remove even the worst-performing, most abusive officers.

We can not call them police if we want to. That’s semantic, but maybe symbolism matters. But those people have to be state employees. They can work with community-based nonprofits, but there are also communities that don’t have as robust of a nonprofit network, and they deserve protection too. These [community] groups have to be accountable to the state, and when they don’t exist, the state has to be there.

Progressives get all the points I just made when it’s applied to education. The notion that things be public and accountable to the state is understood when it comes to schools. It’s exactly why so many people on the left are opposed to charter schools, because they say they don’t have public accountability. They want these things to be a state function. But this point about the difficulty in removing this entirely from the hands of the state is, I think, one that liberals and progressives understand from other contexts.