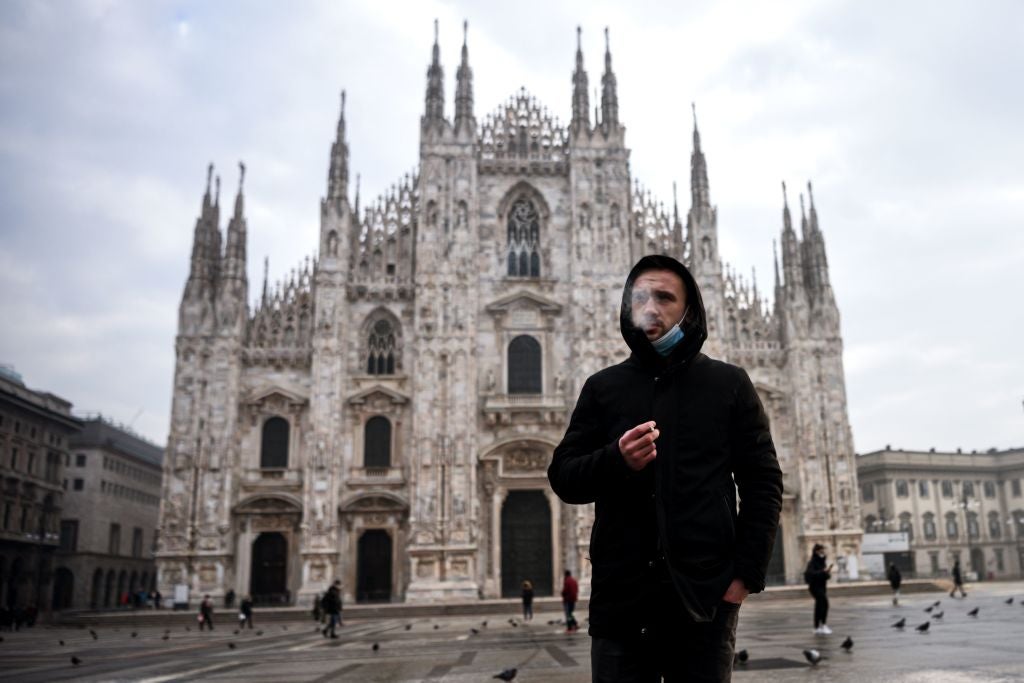 A man smokes a cigarette in the Piazza del Duomo in Milan in January 2021 as it became the first Italian city to introduce an outdoor smoking ban following air quality regulations approved by the Milan City Council. (Photo by Piero Cruciatti/AFP via Getty Images)

Tobacco kills over eight million people each year and accounts for 25% of all cancer deaths globally. In a post-pandemic world, the effect of tobacco on health has proved to be even more dangerous: a World Health Organisation (WHO) report from May 2020 revealed that the severity of Covid-19 infection is higher among smokers.

As with anti-smoking efforts, influencing behaviour has emerged as a key challenge for policymakers and public health professionals in the fight against Covid-19. Many initiatives to secure healthy cities have been steadily moving forward, supported by anti-smoking advocates.

In response to our growing understanding of the dangers posed by smoking (and second-hand smoke), an increasing number of cities have introduced smoke-free regulations in areas such as beaches, parks and playgrounds. More recently, in trying to limit the spread of Covid-19, social distancing has been the focus of the response. With the increasing ubiquity of face masks, authorities have been thinking about how to further limit exposure to second-hand smoke in overcrowded urban areas.

The pandemic has reminded us all how important and fragile our health is. Marco Granelli, Comune di Milano

Smoke-free restrictions are not new, of course. In the ’90s and early 2000s, interior spaces such as workplaces, public transport and public buildings were the initial target of such measures. These efforts followed the 2003 WHO Framework Convention on Tobacco Control (FCTC), which was aimed at setting common standards and goals to prevent and control the use of tobacco products. Just over a decade later, over 160 countries have agreed to commit to achieving a 30% reduction in smoking by 2025. Thus far, Australia, Sweden and New Zealand have been at the forefront of becoming smoke-free nations by that target date by dramatically reducing smoking prevalence and tobacco availability.

Though we hear a lot about second-hand smoke in bars, restaurants and other indoor spaces, the impact of that smoke on the air we breathe in public spaces has been shown to be dangerous as well. Cities are getting more proactive.

Milan is the latest municipality to introduce a smoking ban in public places. In January, the city council approved air quality regulations aimed at improving environmental standards. “The pandemic has reminded us all how important and fragile our health is,” said Marco Granelli, councillor for mobility and public works at Comune di Milano, who explains he would have moved forward with this measure even without Covid-19. “Milan already suffers from the accumulation of polluting dust. Within the air quality regulation, it was essential to identify and include all effective measures such as the smoking ban, as cigarette smoke is responsible for 7% to 8% of the total CO2 emissions [within the city].”

Introducing new anti-smoking areas can help transform the public realm, reversing the trend of installing designated smoking areas, popular in airports and in cities like Singapore, Shenyang and Tokyo, which made public smoking more acceptable. Whereas national governments can legislate at a broader level, the Covid crisis has shown that cities can also chart a new course for smoke-free public spaces.

“The health crisis has created a work overload for the services in charge of health issues. In this sense, the pandemic was not an ally,” says Yves Martinet, president of the French National Committee Against Smoking. Last November, the organisation put its support behind Cities Without Tobacco, a pilot project involving the towns of Joinville, Mulhouse and Thionville in France’s Grand Est region. “The city is the ideal size to implement certain measures to fight tobacco,” he continues.

England also saw rapid implementation of smoke-free policies throughout 2020. “Councils have not backed off from addressing smoking,” said Hazel Cheeseman, director of policy at Action on Smoking and Health (ASH). “In fact, they often reported stepping in to fill the gap left by the NHS as health services retreated to focus on the pandemic.” ASH’s latest report shows that 68% of the surveyed local authorities had implemented smoke-free public spaces in the past year.

Also in 2020, Bloomberg Philanthropies, the World Health Organisation, and Vital Strategies’ Partnership for Healthy Cities expanded its scope by providing assistance to enable cities across the globe to increase support for, and enforcement of, smoke-free regulations. In Kuala Lumpur, Malaysia, for example, smoke-free signage went up at over 30 mosques, while in Kampala, Uganda, a broad-reaching communications campaign raised greater awareness of rules against smoking in public spaces.

Regional responses relating to specific smoking products have been put in place as well: since the start of the pandemic, the ban of water pipe use in all public places was adopted by 17 out of the 22 countries in the eastern Mediterranean region. In Iran, Behzad Valizadeh from Iran’s Ministry of Health reports that a five-year plan for tobacco-free cities and villages has been implemented in 63 cities and 63 villages.

Aside from reducing the harmful exposure to second-hand tobacco smoke, smoking bans offer both economic and environmental benefits to municipalities. Cigarette butts are a dominant source of pollution at urban sites; smoke-free outdoor areas can reduce such litter. In the past years, municipalities have adopted measures for collections by introducing trash bins designed exclusively for cigarettes or changing the design of existing bins to allow them to collect ash. This has led to the emergence of a new waste stream where tobacco litter abatement costs in cities are estimated from $27m in Chicago to nearly $80m in New York. In Europe, a study by the German Association of Municipal Companies determined this cost for all cities and municipalities to be around €700m ($851m) each year.

Ultimately, the aim of smoke-free spaces is to help citizens live a life without the negative impacts of tobacco. The benefit of setting bans can help smokers, as well – studies have shown that smokers are more likely to give up the habit if they live near green spaces. For cities like Paris that have introduced policies mandating smoke-free parks, the expansion of green spaces would have a collateral effect of extending the smoke-free perimeter within cities.

Gaining momentum on the temporary bans initiated during lockdown, the fight against smoking could help cities and countries reflect on their current strategies – and adjust their policies to help achieve 2025 targets: “The opportunity presented by Covid-19 must be used to boost and scale up commitment for tobacco control and meet the obligations of the FCTC,” said Dr Vinayak Prasad, head of the WHO’s Tobacco Free Initiative.

Little by little, the cities of the future will next need to look beyond tobacco. Places such as Cape Town and Christchurch are broadening their scope to include other tobacco products like e-cigarettes. Developing mindful policies that prevent and reduce tobacco consumption and exposure to tobacco smoke needs to go hand in hand with citizens’ compliance and authorities’ enforcement. These remain the most difficult aspects to track.

Based in Brussels, Daniela De Lorenzo is an Italian journalist who writes on cities, tech and sustainability.
Websites in our network