“Social distancing” is a strong contender for the phrase of the year, but listen carefully to public health experts and you’ll probably hear them recommending something else.

What the World Health Organization and others encourage instead is physical distancing, a small difference that makes a big point: social connection is still good for us, even when being together is not. 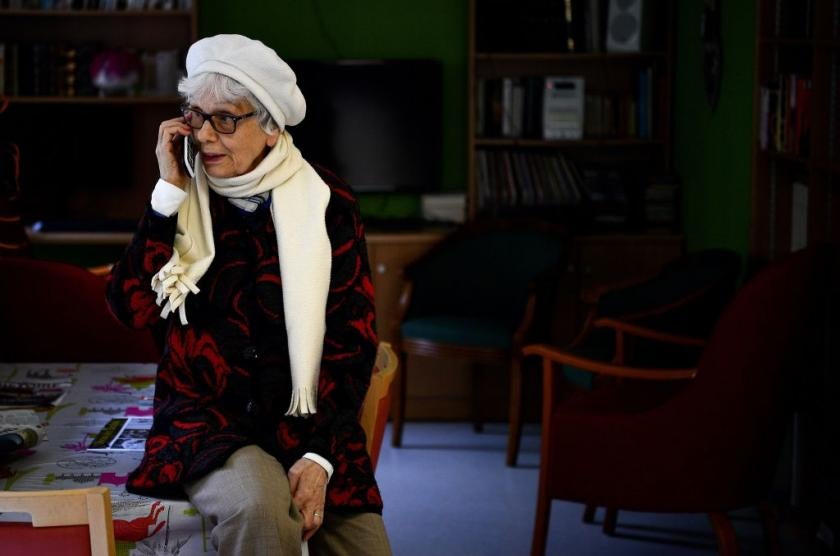 A 2017 report found that more than one third of Britons over 75 experienced feelings of loneliness that were out of their control. (Photo by Christophe Archambault/AFP via Getty Images)

That message matters especially to people battling another scourge of public health: loneliness. In 2017, the UK’s Jo Cox Commission on Loneliness identified chronic loneliness as “a day-to-day reality which, over time, can grind us down, affecting our health and wellbeing and damaging our ability to connect with others”. It’s a condition that’s considered to be widespread and have severe effects on individual and public health, akin to smoking, diabetes, or heart disease.

That’s particularly true for older people, who may have fewer opportunities to connect with others, and who may have health issues that are compounded by the effects of chronic loneliness. The Cox Commission found that more than one third of Britons over 75 experienced feelings of loneliness that were out of their control.

It’s important to know that an age of physical distancing does not inevitably lead to an age of loneliness, says Kate Shurety, executive director of the Campaign to End Loneliness. While much about daily life has changed for the foreseeable future, there are still many ways for friends, neighbours, and local officials to foster social connections for the health of their communities.

City Monitor spoke with Shurety about the social challenges of a prolonged lockdown and the public health response to loneliness. This conversation has been edited for length and clarity.

What should people understand about loneliness right now?

A lot of people are coming into this with a lot of anxiety about loneliness, so it’s quite important to try and take some of that anxiety out. Social isolation and physical isolation are not the same thing. Physical isolation doesn’t mean you will automatically become socially isolated, and even for people who are socially isolated, loneliness isn’t inevitable. They do exacerbate, and they can complicate and they can trigger loneliness, but in and of themselves, they needn’t be the result.

We all experience loneliness. We shouldn’t necessarily be scared of it in its own right, because it is a useful prompt. When we feel lonely, it is a reminder that we need human connection and that we need to reach out to people around us.

It becomes problematic and it has a public health impact when people are lonely for a long time and there’s no obvious way out of it. It can become a sort of self-fulfilling cycle in that sense, and that chronic loneliness happens more in later life. People’s sense of identity is very caught up in how connected they might feel with other people, so cultivating a sense of community is really important.

Public health networks are dealing with a flood of issues right now. What should they know about how loneliness factors into all of it?

If people are isolated and feel lonely for a prolonged period of time, you should try to put interventions in place alongside a whole range of other public health issues surrounding the infection. If there are interventions that can mitigate against that, it’s worth thinking those through now, because prevention is always better than cure.

As one example: there was a pilot project last year that the Royal Mail was doing about understanding who is living on their own and what role the mail can play, or what role gas engineers can play, in helping those people feel connected. Those workers are often out and about, and they’re often in and out of people’s houses. It’s worth understanding who in this great infrastructure out there is making contact with people, and who could identify people who are at risk of feeling lonely or disconnected for a prolonged period of time. Think about how you can build connections into those regular interactions.

People who are feeling very lonely or chronically lonely often talk about feeling invisible or not feeling heard. So just being open to recognising another human being’s presence is really, really helpful. It’s very hard to take action at that stage, so a lot of our messaging is around other people who might interact, including public service workers who can be able to recognise that somebody might be feeling lonely.

How do neighbours fit into this discussion?

We talk a lot about being aware of who’s living around you, and who’s on their own. In my area, we all made sure we had each other’s phone numbers as soon as it looked like we were heading towards a lockdown situation. And we all touch base every now and then as a group of neighbours, just to see if anybody needs anything. That’s hopefully a valuable lesson that we take from this period, so that we do keep an eye on people and have that sense of being a neighbour and knowing who might need a bit of extra support.

What should a person do if they want to help someone in their neighbourhood who’s alone right now? How should you get in touch without getting close?

There will be various advice on this, but you could drop a note through the door or knock on the door and chat from a distance and say, “Just to let you know, I’m here. This is my phone number. I appreciate that you might well have everything you need, but if at any point you don’t, or you just want to chat, you can give me a call.”

But don’t make assumptions: Just because someone’s on their own, they might not be lonely. Some will be quite happy, but equally, people’s relationship with this experience is going to change. Someone who’s fine now might not be fine in two or three weeks time. So have those conversations early so you’ve built a bit of a relationship and people feel they can lean on you if they need to.

We’re also trying to encourage people to use the phone because it’s much better than just a text message or a message on social media. Hearing a voice is as close as we’ve got to being physically present with each other at the moment. It’s particularly important for people who can’t access other digital technology, whether it’s because they don’t have the resources or the skills, or they’re just of a different generation. Hopefully the phone is something that’s still pretty accessible for most people.

There has been a conversation in recent years about social media as a driver of loneliness. Does that still apply today?

There are some real positives there, but there are some real limitations, too. Technology’s never going to be able to create that warmth or compassion that comes with actually being physically present with somebody. You can’t be quiet on social media in the way that you can be quiet in someone’s presence. That can be quite an intimate thing.

There has been, especially amongst younger populations, a tendency for social media to exacerbate a sense of isolation and potentially being on your own, because you’re constantly looking at what else there is to keep up with, and that can be quite alienating if you’re always looking at everybody else’s perfectly curated life. You’re not actually connecting with a person, you’re connecting with a persona, and that’s where technology can have a more negative impact on people’s experience of loneliness.

Somewhat counterintuitively, I’ve felt more connected with a lot of people in recent weeks, and I’ve heard that from others, too. Do you think that’s true for a lot of people right now? What might be behind that?

I think that is the case. Suddenly everyone’s got a little bit more time, and a little bit of loss. Another thing I would say as my own personal anecdote, I usually work in central London, but I’m in my neighbourhood all the time now. I am talking to my neighbours – at an appropriate distance, I hasten to add – in a way that I normally wouldn’t. Normally I just come in tired and go in the house, whereas now I’m much more in tune with what’s actually going on on my doorstep, and that feels really good. Those are the relationships I’ve not fostered or cultivated, particularly, but that’s something I’m changing now.