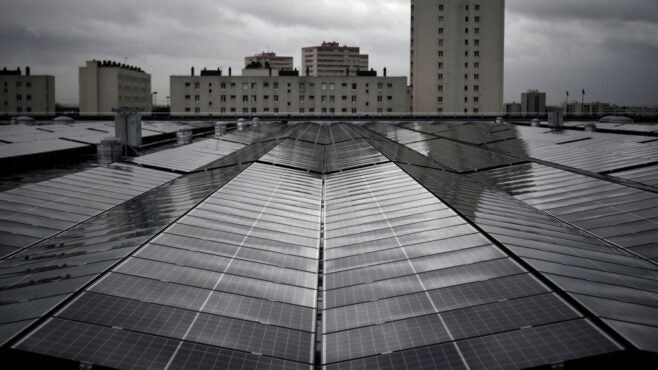 The pandemic has dealt mixed fortunes to the portions of city budgets allocated towards fighting climate change. Across the board, however, city-level commitments to the green transition are rising.

More than anywhere else, the battle against global warming will be won or lost in cities. Home to more than half of the world’s 7.8 billion people, urban areas are responsible for a whopping three-quarters of the planet’s total carbon emissions, according to the Coalition for Urban Transitions.

Although many cities announced their own Green New Deals over the past year, Covid-19 may slow the already-lagging green transition. With the global economy heading for the worst recession since the Second World War, some municipal programmes aimed at climate action have been, or will be, postponed or cut.

“Cities are dealing with a health emergency amidst a climate and social breakdown. You cannot solve one crisis at the expense of another, so cities are in a bit of a bind,” says Claire Roumet, head of strategic partnerships at Energy Cities, a European association of local authorities in energy transition.

The financial fallout from Covid-19 has been nothing short of immense, especially for cities.

In early October, London Mayor Sadiq Khan said the capital’s mass transit system needed a £5.7bn ($7.4bn) bailout. Without it, London could quite literally come to a grinding halt.

For many urban centres – even those within highly developed economies – the pandemic has utterly disrupted 2020 budgets.

“We have less money for everything, not just green issues,” says Ada Amon, chief adviser to the mayor of Budapest on climate affairs. “The Hungarian government is taking money out of municipalities for recovery purposes. They’re redirecting our income sources into the state budget to provide funding for the Covid situation.”

Across many European cities, the deeper impact of Covid-19 on renewable-energy-source (RES) investment remains unclear, according to SolarPower Europe, a member-led association representing the solar industry.

Many RES programmes for 2020 have been postponed, and the group expects graver consequences. “We could see the [complete] cancellation of RES support schemes due to the allocation of budgets for recovery measures, as in the Czech Republic – or cancellations due to lower revenues from fuel taxes in countries where RES budgets are directly or indirectly financed from these taxes, as in France,” says Naomi Chevillard, a senior policy adviser at SolarPower.

The impact on London’s finances remains hazy. Although the city’s Green New Deal –  announced before lockdown ­– was recently adopted into the city’s official recovery strategy, the budget is still being formulated.

“Uncertainty” is also the central word in Dundee. “There are huge financial challenges for local authorities, and we’re not yet in a position where we have clarity on that. For one, we’re not over this crisis,” says John Alexander, leader of the Dundee City Council.

On the one hand, the pandemic has cost the city £32m in additional expenditures, according to Alexander. On the other, new money has been made available by the Scottish government since the pandemic began, such as the £100m Clean Job Fund.

If the situation is difficult for Dundee, imagine how much worse it is in less developed countries, says Alexander. “We’re in a rich nation. [Elsewhere] the priority is feeding the population,” he says. “Expecting them to invest as we do is ridiculous. So we can’t stand aside, not least since the green transition actually represents an economic and social opportunity.”

Spain’s València tells a similar story of hardship amid privilege. Public and private financing in the city is expected to drop due to lower incomes and the economic crisis more generally, and public-private formulas are being sought to maintain the energy transition, says Alejandro Gómez Gil, energy innovation officer at the City Council of València.

“Work is also being done to align city strategies in this area with European financing lines, with the aim of accessing them and taking advantage of available economic resources,” he adds.

Casting a shadow on the green transition

The impact of Covid-19 on cities’ renewable-energy transition efforts can be inferred from the overall health of clean-energy markets such as solar.

In Europe, for example, the effect of the pandemic on photovoltaic (PV) installation rates varies according to location, largely depending on how severely each country suffered from Covid-19 and the manner in which governments responded, according to SolarPower Europe. Globally, the organisation estimates that installed PV capacity will decrease by 4% to 112GW in 2020.

For the solar industry, 2020 will be somewhat of a lost year, says Raffaele Rossi, a policy analyst at SolarPower Europe.

“With many countries in Europe hit very hard by the virus, the continent is expected to see a deep dive in demand this year, putting a clear brake on the very positive momentum of the past two years. There are a few exceptions in places less affected that did not implement hard lockdowns, like Germany,” he adds. SolarPower anticipates that Europe’s solar additions will fall by 29% this year.

It is not just the solar market that saw positive momentum struck down by the pandemic. Globally, renewable-energy capacity increased year-on-year between 2015 and 2019, and with aplomb, according to Investment Monitor. On the plus side, there was only a modest decline in renewable-energy project announcements in the first half of 2020, thereby highlighting a resilience in investment appetite despite Covid-19.

In other good news, the next four years are expected to add even more solar than was expected last year, says Rossi. The actual growth level will depend, among other things, on the extent to which various economic-stimulus programmes support the solar market.

“Both at a global and European level, we do not expect the virus to pose a big risk in the medium term for utility-scale solar, while the commerce and industry and residential sectors might see negative impacts for some time, as businesses and consumers will not necessarily invest in solar if they are struggling from a longer economic downturn,” adds Rossi.

This is where economic-stimulus packages will play a very important role, indirectly by boosting national economies and the business environment and directly by offering financial incentives for solar investments – something that some countries and regions have already announced. 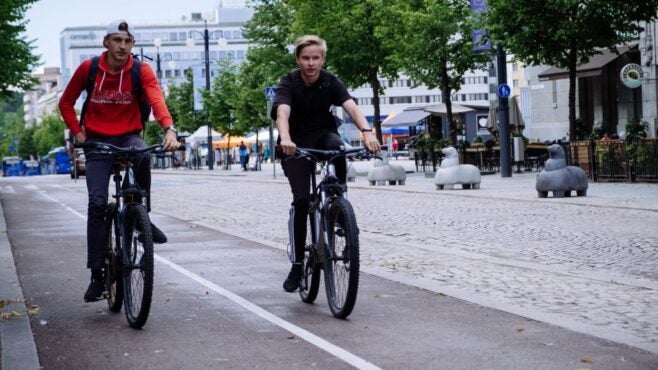 The EU-funded CitiCap pilot programme in Lahti, Finland, allows individuals to track their carbon emissions. This project has been able to proceed this year despite the pandemic. (Photo by Alessandro Rampasso/AFP via Getty Images)

The good news for climate action

Not all cities have seen their green budgets hit.

In Montréal, for example, financing dedicated to climate, green projects and environmental protection have remained steady, according to the mayor’s office.

In New Orleans, the pandemic has not decreased climate action funding since many of the city’s projects are either grant-funded or incentive-funded, says Camille Pollan, programme manager at the city’s Office of Resilience and Sustainability.

“So, fortunately, our major initiatives like green infrastructure installations or energy efficiency upgrades are able to move forward. In fact, a lot of these programmes will save the taxpayer dollars, either in reduced municipal energy costs or lower risk of flood damage,” she adds.

Some cities have in fact seen their green budgets boosted by Covid-19 recovery plans. Seoul’s Greenhouse Gas Reduction Plan, announced in July, aims to spend more of the city’s budget on climate action, especially with regard to improving buildings’ energy efficiency and increasing the share of environmentally friendly vehicles in Seoul.

The city will inject a total of $2.2bn by 2022 in new green policies, says Subin Lee, a spokesperson for the Seoul Metropolitan Government. “The city’s climate action projects have not been put on hold or suspended due to the pandemic. Rather, the [municipal] government plans to implement more projects in accordance with the Greenhouse Gas Reduction Plan,” Lee says.

The outlook for ongoing city-level projects in Europe is also fairly positive. While the situation varies from location to location, Covid-19 has not had a big impact on green projects across hundreds of European cities, particularly in community energy, energy efficiency and electrification, according to Energy Cities. There are a couple of reasons for this.

“On one hand, cities are in the midst of an energy transition. That’s not something you can switch on and off – it’s an ongoing and accelerating process driven by citizens. And quite pragmatically, where specific budget lines for projects are involved, it is likely to be as expensive to stop as it is to keep going,” says Energy Cities’ Roumet.

“Once complete, those projects often save money. So in the longer term, it would be much more costly to try and stall or delay the plans that are already in place than to proceed with them”

Green recovery is still a focus

That energy transition policies are cost-effective in the medium to long term can make them even more attractive during times of economic crisis.

Spending at the disposal of all cities is always limited, says Mario Vanni, chief of Milan’s mayoral cabinet. “The economic crisis generated by the pandemic certainly makes it more difficult to kick-start some initiatives, so cities must apply a lot of common sense as well as creativity. In Milan, we’re creating light cycle lanes, without curbs, both to reduce costs and to offer a swift green alternative for our citizens to move around the city,” he adds.

Milan was one of many cities that used lockdown to roll out kilometres of new cycle lanes, while also increasing pedestrian walkways, green spaces, transit extensions and consumer incentives for the purchase of less polluting forms of transport.

“We strongly believe that there can be no real recovery unless it is green and just. Those will be the main drivers of the post-Covid recovery of Milan,” says Vanni. “We need more-sustainable jobs, more investments in the green sectors and in transport, and adequate building requalification programmes,” he adds.

With the right investments in climate action, cities can not only reduce 90% of emissions but also create 87 million jobs by 2030 and produce a return of $24trn by 2050 in cost savings alone, according to the Coalition for Urban Transitions.

In short, Covid-19 has acted as a wake-up call. The mayor of Leuven, Mohamed Ridouani, summarises the sentiment well: “It has never been so clear how important it is to invest in qualitative and sustainable public services for everyone.” For citizens, too, lockdown highlighted the beauty of less polluted, more community-oriented cities.

Like in Milan, the mayor of Montréal makes the bottom line on recovery very clear: the health crisis and the environmental crisis go hand in hand. Both cities are members of C40, an association of 96 cities working together to fight climate change.

This is why it is so important that cities have a seat at the table in designing national recovery plans, says Roumet.

“The EU has just issued guidance on what should be in those plans, but aside from a few mentions, it really failed to understand the long-term risks to cities and why they need to be at the table as a full partner discussing how and where money can be best spent tackling the Covid crisis and the climate crisis,” she adds.

This has reinvigorated calls for the European Commission to provide green funding directly to cities, as opposed to national governments as is currently the case, says Budapest’s Amon.

The coming months will be crucial as national and supranational governments assess the ongoing damage caused by Covid-19 and formalise their recovery plans and budgets. The stakes are existential.