Around the globe, in spheres of government, business, and civil society, a burgeoning consensus affirms that societal recovery from impacts of the coronavirus must occur in ways that are pro-environment and pro-equity. 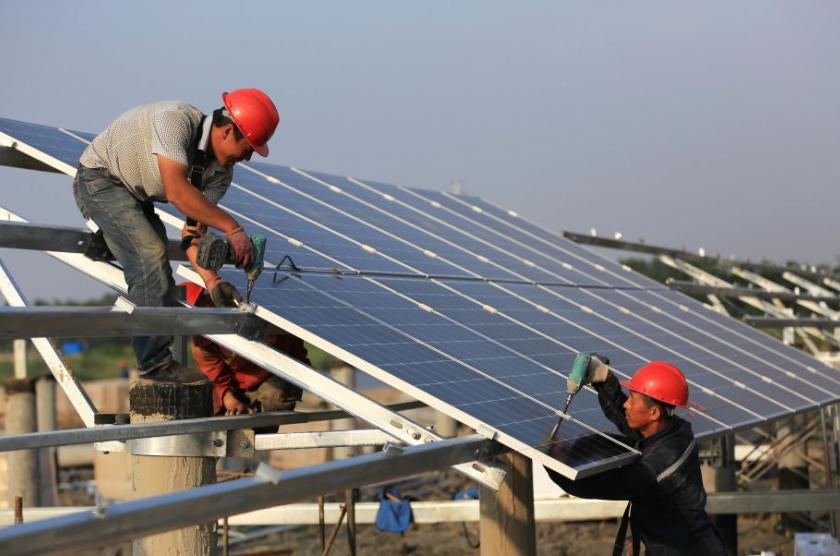 There’s evidence that the pandemic is speeding economic conversions towards the goals of “green deals”. (Photo by VCG via Getty Images)

A newly released report from the C40 Cities network aims to point out specific examples of this kind of recovery taking place, encouraging mayors to learn from one another as they implement policies that address residents’ short- and long-term needs while the pandemic continues. The group says solutions are available that also address two of humanity’s older, but no less urgent, crises: climate change and people’s inequitable access to the resources needed for a decent standard of life. Cities are a natural place to focus efforts\ because they are home to more than half the world’s population, 90% of reported coronavirus cases and “are where the future happens first”, according to the report.

“To build the future we want, the process of recovery must bring about meaningful change in the way we think about our societies and our economies. We must forge a new normal,” reads the “Mayors’ Agenda for a Green and Just Recovery”, published by C40’s Global Mayors Covid-19 Recovery Task Force. “A return to ‘business as usual’ would not just be a monumental failure of imagination, but lock in the inequities laid bare by the pandemic and the inevitability of more devastating crises due to climate breakdown.” The task force is chaired by Milan Mayor Giuseppe Sala, and its recovery principles have been endorsed by over 40 mayors, representing cities on every continent.

By highlighting new, post-Covid governing practices in areas from mass transit to job creation to feeding the hungry, the task force hopes to demonstrate broad-based urban action against the backdrop of widespread calls to “build back better”. Whether it’s the United Nations asserting on Earth Day that “fiscal firepower must drive a shift from the grey to green economy”, or the Carbon Neutral Cities Alliance writing an open letter to global financial leaders saying the same, or the rising profile of doughnut economics and the degrowth movement, the drive for a “green and just recovery” appears to have become conventional wisdom in many circles. The environmentalist and former US Vice President Al Gore, who chairs a $20bn investment firm, now says that the “sustainability revolution” is “the biggest investing opportunity in the history of the world and the biggest business opportunity in the history of the world”.

Just a year and a half after Congresswoman Alexandria Ocasio-Cortez introduced the concept of a Green New Deal in the US – meeting both scorn and acclaim – green deals are found all over. In April of 2019, both New York and Los Angeles unveiled their own Green New Deals. In December, before the pandemic, a continent-wide European Green Deal was announced. This June, Seoul made its version public. And there’s evidence that the pandemic is speeding the economic conversions these plans envision. (There’s also plenty of evidence that among the untold billions being spent on recovery are massive grants to fossil fuel industries in the UK ,the US and elsewhere.)

Former mayor of Toronto David Miller thinks mayor-led actions can and must gain momentum. “The cities represented in the task force, and C40 Cities generally, have taken real action against greenhouse gas emissions that has proven effective, and a way to address inequality and create jobs. What the world needs is to take these excellent examples and do more, quickly,” says Miller, C40’s director of international diplomacy. “The actions of C40 mayors to reduce emissions, through actions to clean electricity generation, lower emissions from buildings, clean transportation and waste management, show what is possible and have resulted in real emission reductions. Last year in Copenhagen, 34 cities announced their emissions had peaked. They have showed what is possible, and this should give hope.”

Leaders in New Orleans share that drive. The city, located alongside the Mississippi River Delta and the Gulf of Mexico, is one of the places in the world that is most quickly losing land to water. Mayor LaToya Cantrell is a member of the Covid-19 Recovery Task Force, heading the committee focused on equity. While tourism dollars and jobs have been essential to the local economy, the recent tourism drought is driving the city to act on its pre-existing Climate Action Equity Report and create more green jobs, aimed at de-carbonizing infrastructure, and blue jobs, which have to do with water management.

“We’ve been looking at ways we can really turbocharge these programs and inject more cash, more infrastructure, more trainees – to create essentially a Civilian Conservation Corps that is part of the post-Covid labour force,” says Camille Pollan, project director in the city’s Office of Resilience and Sustainability. It’s not yet clear whether any of the estimated $6trn in US federal stimulus money allocated thus far can be used towards such projects, says Pollan, so state and philanthropic funding is also being sought.

A place of unique vitality, New Orleans is also a place of inequality, which has been highlighted by the coronavirus’s impact. According to 2018 figures from the American Community Survey, the city’s population of 389,648 is 59% Black and 31% white, but today Black people account for 75% of the city’s deaths from the coronavirus, and white people 22%.

“Covid was really an opportunity to re-examine” the goals of the equity report, says Pollan, “and to say, these are really relevant to the inequities we’re trying to address.” When data began showing that Covid was disproportionately affecting Black and low-income residents, those with less health insurance and respiratory issues, she says, “in some ways, it was not surprising but also a wake-up call that all these underlying issues need to be addressed.”

“We have one opportunity to get this right. We have the possibility to help all residents, versus just going back to business pre-Covid,” Pollan says. “We can seize the moment to develop transformational change.

“We know what we have to do to slow, stop or reverse global warming. The economic engines can be moved to support that effort today, but not five years from now,” she says.

Topics in this article: Covid-19, Mayors