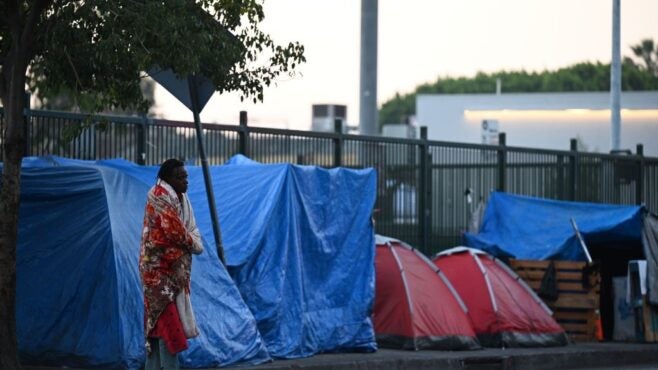 A homeless man stands outside tents on Skid Row in Los Angeles. (Photo by Robyn Beck/AFP via Getty Images)

Even after the coronavirus pandemic ends, job losses in recent months will cast a long shadow into the future unless there is intervention at all levels of the US government.

This is the finding of a new report on pandemic unemployment from the Economic Roundtable, a Los Angeles research non-profit. Using current unemployment figures and projections based on data from the 2008 recession, researchers found that the US could see a dramatic increase in its homeless population over the next few years – as many as 603,000 people without housing by 2023.

As low-wage workers continue to lose their income, which was already insufficient before the pandemic, researchers expect to see a slow slide into homelessness, most often in the form of couch surfing or other informal housing arrangements. Much of this is expected to play out in cities. Los Angeles’s homeless population alone is projected to grow by more than than 52,000.

City Monitor spoke with Anthony Orlando, a real estate professor at California State Polytechnic University, Pomona and co-author of the report, about his findings and what city leaders can do now to prevent a worsened crisis.

The estimated figure of 603,000 more people experiencing homelessness over the next few years is staggering. Are there any mitigating factors that could prevent such an explosion?

One of the important things to recognise about that number is that it’s what could happen if we don’t do anything about it. One of the problems with homelessness growing in a lot of cities over the last decade is that we were late to address it. After the last recession, a lot of cities did not take strong proactive measures until eight to ten years after the recession was over.

The report identified a group of people at the margins of the labour market who are the most vulnerable to homelessness. What does this population look like? What kinds of jobs are the most at risk? Could they come back once the pandemic is over?

I think it would surprise a lot of people to learn that almost half of the homeless population has worked in the last year. There’s an impression out there that most homeless people just don’t work. And that’s not true. They work; they’re just not getting paid enough. So when we say the margin, we’re really talking about the folks who don’t have a stable income and a high-enough income to deal with a crisis when it happens. It’s not only the fact that they’re not getting paid a very high wage, it’s also that they’re not getting enough hours. And when their company is in financial trouble, they’re the ones who get sent home for a few weeks.

In a crisis, we actually can create a lot of housing for the homeless; it just has to be a priority.

Those jobs tend to be predominantly in service sectors nowadays: restaurants, bars, educational institutions. So it just so happens that the types of industries that are affected the most by the pandemic are also full of these workers at the margin, who can easily be cut out.

After recessions, consumer spending usually bounces back pretty quickly, business investment bounces back pretty quickly, but the labour market is usually a couple of years behind. Once businesses go through the recession and they figure out how to do their work with fewer workers, they become leaner, meaner, more efficient. They realise they might not need to hire back as many people as they had. So just a little bit of improvement in the economy isn’t going to do it.

And this in turn leads to the lag before a homelessness spike.

Exactly. The longer people are without a job, the more likely they are to run out of resources.

At the beginning of the pandemic, there was a fear that there would be massive evictions and people wouldn’t pay their rent, and that didn’t happen. Most people paid their rent. Even when it seems like their rent is going to take up an astronomical portion of their income, they still figure out a way to do it. They rely on savings, they rely on family and friends, they file for unemployment insurance, they take that stimulus check, they get creative about every possible way that they can pay for it.

But the longer someone remains unemployed, the more they’re going to run out of those things. So it’s not until unemployment has been elevated for a while that you start to see something as bad as someone losing their home and not being able to get another one. That’s when they have been completely tapped out.

At this point, the US is also facing an eviction crisis on top of an existing housing affordability crisis. How do you see the relationship between work, housing and homelessness?

The challenge with homelessness is that it really only happens when a combination of factors collide. People find themselves in a situation where they don’t have sufficient income, the housing costs are high enough and they don’t have either the support that they need to ride out the storm or they’re not equipped with the tools to do it themselves.

So one of the things that a lot of urban experts have been trying to do over the last few years is to come up with better predictive models to understand who in the population is most likely to become homeless, then we can try to prevent it. We’ve been doing that at the Economic Roundtable, and it helped to inform our analysis.

One thing we have good data on is job loss. So it’s not the case that job loss automatically triggers homelessness, it’s just that we know that when there’s this many job losses in the economy, there are enough people out there who don’t have the resources or the skills to deal with the job loss. And that’s the percentage of those folks who are going to wind up in some sort of housing insecurity.

In terms of housing, one thing that we recommend in the report is giving financial incentives to landlords and lenders to forgive some of the payments that are owed to them. The eviction moratoriums may have been very valuable for a while. But for a lot of these landlords and lenders, what they’re doing is just postponing the payments; they’re not forgiving. So we want to be careful that we’re not just pushing the losses from one group that can’t handle it to another group that can’t handle it. It would make better sense for the economy, and probably for fairness’s sake, to have the government direct some funds to them for relief. And if landlords get that relief from the government, then they can pass along that relief to their tenants or to their borrowers.

The other side is to just give money directly to the tenants, and in some ways we’ve done that. That’s what stimulus payments are. That’s what unemployment insurance benefits are. But unfortunately, our analysis shows those come up way short.

Many of the solutions you’ve proposed would require sweeping federal policy, but what are some lessons to be learned at the local level? What can cities do now and into the next few years to prevent these delayed effects? What tools are at a city’s disposal?

Cities don’t have the resources that the federal government does. The first thing is that federal governments should just do a better job of helping to pay for these kinds of programmes. There should be a sharing of burden going on.

But if you’re sitting in the mayor’s office or the city council, one strategy is to think of smaller, more cost-effective programmes. As an example, there have been a couple of cities that have adopted insurance programmes to cover security deposits. For a lot of people who are living on the margins, a security deposit is a very large chunk of change all at once. When you have an insurance programme where you can charge a premium each month, all you’re doing is breaking up that security deposit into instalments. It becomes a lot more affordable for people who have what economists would call liquidity constraints. That’s a problem that policy really should be able to help with.

And the other thing that I think the recession has made clear to us is that in a crisis, we actually can create a lot of housing for the homeless; it just has to be a priority.  In California, we’ve had a programme called Project Roomkey, where the state went to vacant and distressed hotel properties and tried to turn them into affordable housing for the homeless. If these hotel rooms are empty, why not help people get off the street and have a safe place to stay where they’re less likely to get infected during the pandemic? What we need to do is to turn that into a permanent programme. We can identify what properties are out there throughout the United States that are vacant or distressed, that the current landlords would be happy to get rid of for a reasonable price, and converting them into affordable housing would cost less than to build brand new units.

Some of the data from this report focuses on Los Angeles specifically and is extrapolated for the whole country. But do you expect other US cities to experience surges in homelessness too?

It’s going to vary significantly across cities. But the bottom line is that when inequality goes up, homelessness goes up. And that’s a pretty important finding because there are large differences across cities, and one of the big differences is inequality.

In a more unequal area, you have a really unfortunate dynamic where there are enough wealthy people to drive up housing prices but enough people further down on the pay scale to not be able to afford it. In a place like Los Angeles, where we have such a diverse population – which I think is one of our strengths – the downside is that a large percentage of our population are a part of vulnerable minorities, who are historically discriminated against and face even more risk factors that make them even more likely to fall into homelessness than white Americans.

It was very sobering to read in the report that across income levels, Latinx Americans were twice as likely, and African Americans three times as likely, as white Americans to fall into homelessness.

The disparities that already existed between the races is going to unfortunately increase in the wake of this recession. And there is historical evidence from previous pandemics going back hundreds of years that shows that pandemics tend to increase inequality to begin with.

One of the things that hopefully this crisis is opening our eyes to is just how many people are living at the margins. And the next time a crisis comes – who knows what it’ll be – we can’t predict the next crisis, but we can prepare for it. At a time when the news is universally terrible, I would focus on: what can we do? I would want people to see a report like this not as something to depress you but rather to steel your nerves and give you the fire you need to go out there and demand better policies for the future.