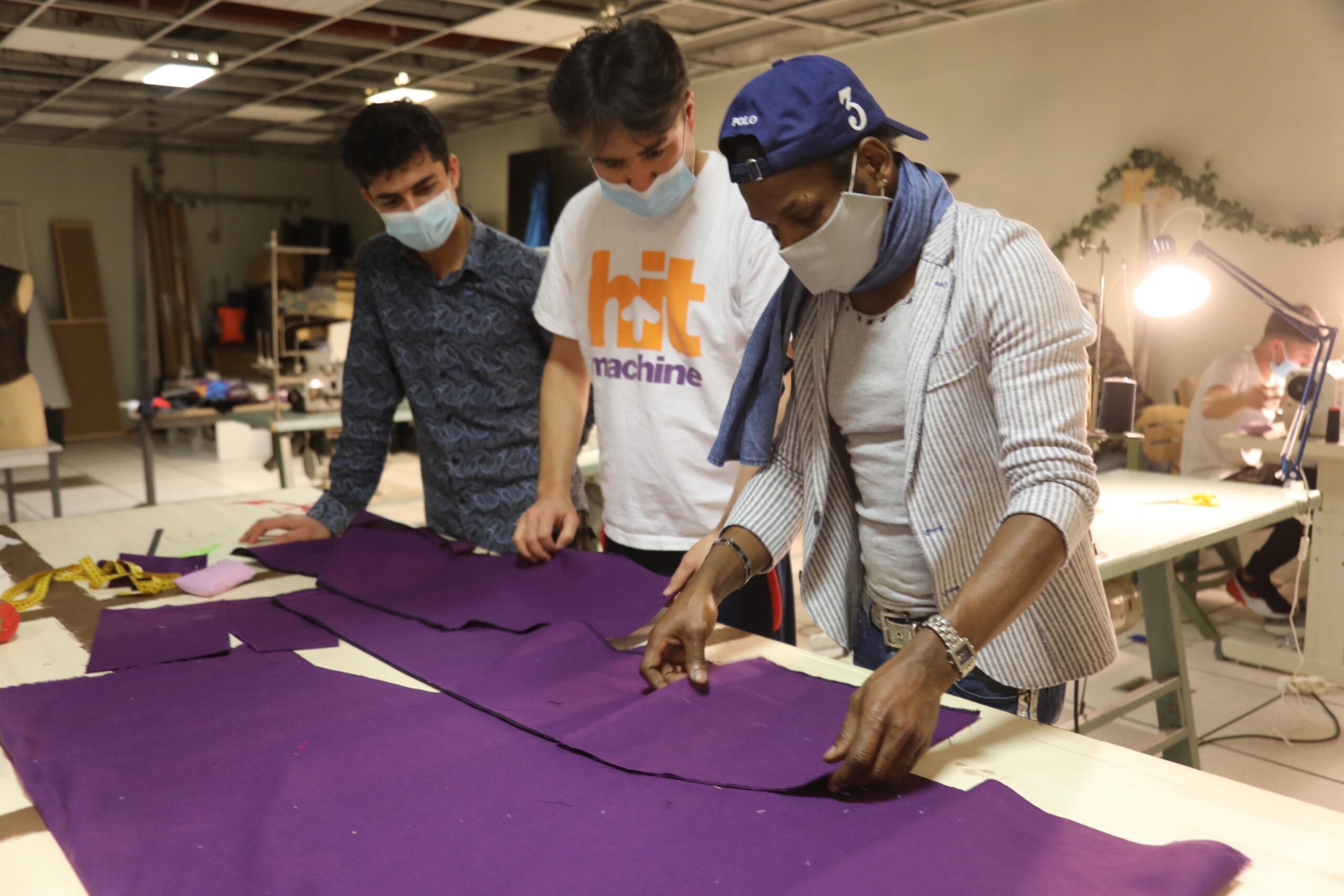 Thierry de Rivot teaches his students the finer points of pattern cutting as part of Espero, a project designed to support refugees by training them to work in fashion design. (Photo courtesy of Espero)

Clad in a sparkling belt, torn jeans and light blue scarf, Thierry de Rivot is going about his workshop teaching refugees in France the art and craft of clothes design in the fashion capital of the world. But the veteran Parisian stylist, who was taught at the renowned École Supérieure des Arts et Techniques de la Mode, remains unflinching when it comes to maintaining his high standards.

“I’m strict and demanding, but I always stay professional,” he says. “That’s how I was taught, and it served me well. That is the recipe for success.”

Since 30 November, de Rivot has been working in a studio at an 18,000m² warehouse in Antony in the south of Paris as part of an effort to weave refugees into the social fabric of France through fashion design. The project – known as Atelier Fildavenir, or Studio Future Thread – is run by the charity Espero, which is currently training nine refugees from Afghanistan, Tibet and Morocco to become tailors.

Each refugee receives ten hours of expert training split over two days per week, honing skills such as designing, pattern reading, fabric cutting and montage, with language lessons provided by the municipality taking up the remaining three days as well as integration support from a social worker over a period of 18 months.

“They’re really hungry to learn,” says Maya Persaud, a former model who became the co-founder and director of Espero, which was set up in November 2016. “These refugees are hugely talented and skilled – often they come with experience of the trade back in their home countries. But Atelier Fildavenir will give them the means to be independent and have their first job in France.” 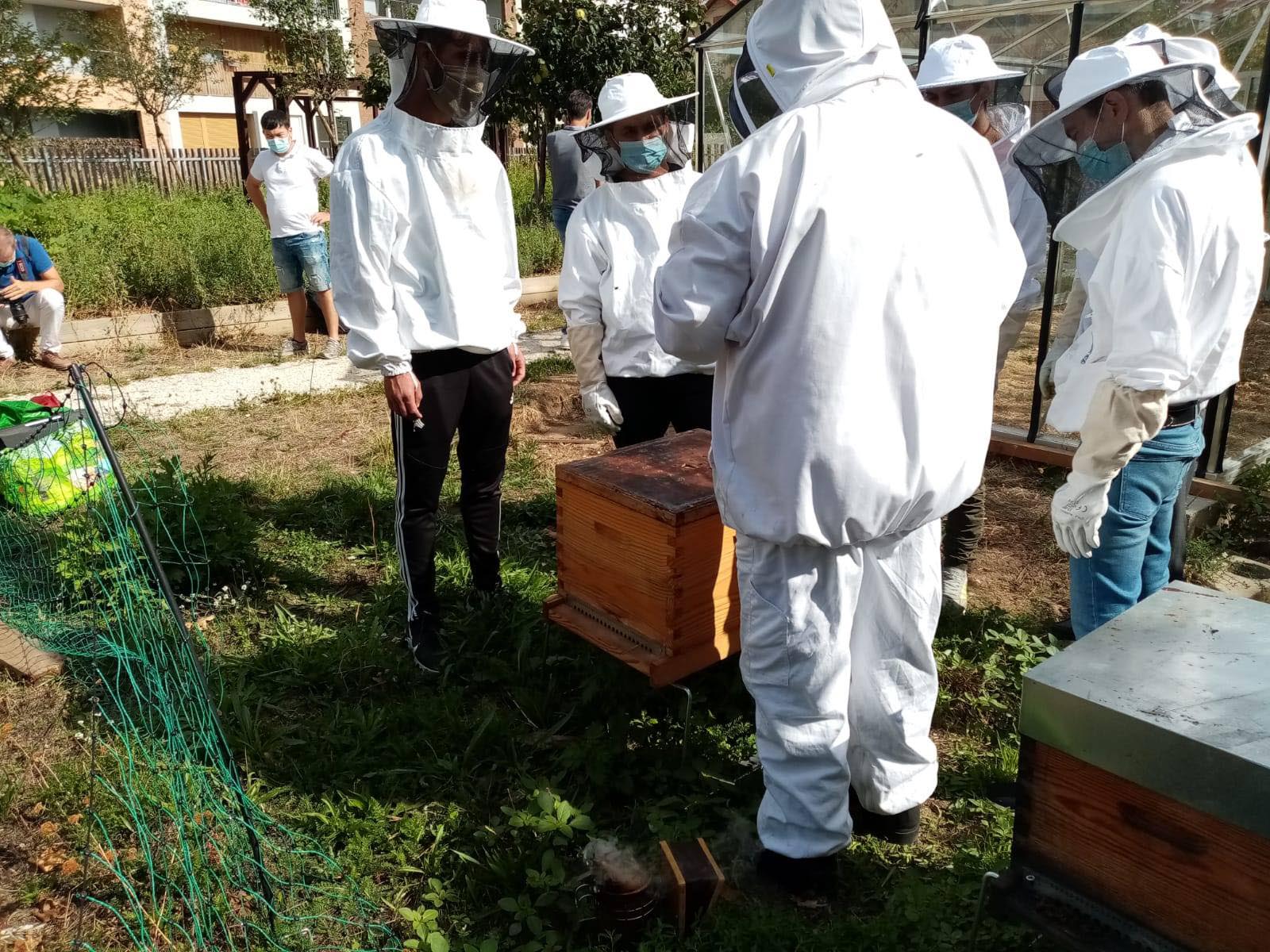 In addition to fashion design, Espero has launched refugee integration schemes around Paris including beekeeping in Bobigny (above) and permaculture in Saint-Denis. (Photo courtesy of Espero)

Espero, whose founders were inspired to act after spending time in the ramshackle Calais “Jungle” in northern France during the peak of Europe’s refugee crisis in 2014 and 2015, has in recent years launched similar refugee integration schemes around Paris – including a beekeeping project in Bobigny and a permaculture farm in Saint-Denis.

In my country, you just work hard; there is no time to learn anything new. I’m really happy with the project, and I want to become a tailor. Reza Rahimi, scheme participant

But given the interest in Atelier Fildavenir, Persaud believes a new level of success can be reached. Major French brands have already offered materials for the refugees to use (for example, luxury fashion house Balmain sent a truckload full of enough fabrics to last four seasons), and special collections are being developed with the industry, including a jumper-recycling initiative being done in collaboration with students from the French Institute of Fashion in Paris.

“The stars are aligned,” says Persaud, who hopes the first class of refugees will be able to start working independently within six months. “Sustainability in fashion is a big issue now, so we have big hopes from the project.”

Help for those who need it most

For refugees, who are found and selected by Espero from nearby temporary housing, structures known as Shelter and Social Rehabilitation Centres, the programme means an opportunity for an independent new life.

Reza Rahimi, a 21-year-old who arrived in France from Afghanistan in 2019, says the first few months of the scheme have proved to be a success. “I’ve learned a lot of things, new methods,” he says. “In my country, you just work hard; there is no time to learn anything new. I’m really happy with the project, and I want to become a tailor.”

More broadly, the project is part of the First Hours Device (DPH), a municipal scheme launched in Paris aimed at changing the fortunes of those who are on the margins of society. It was set up in 2013 and, after two years of experimenting, became part of the city’s official “lutte contre la grande exclusion“ (translated as “fight against great exclusion”) – applying not only to refugees but other marginalised groups such as the unhoused and drug addicts.

In DPH’s first two years, 638 people benefitted from more than 90,000 hours of paid work. Now the Paris scheme supports around 400 people per year, providing up to 72 hours of work per month for activities such as gardening, guided walks, forestry work and catering. Among those who left the DPH in 2019, 36% found employment and 4% had further training, so the rate of “positive” exits as defined by the municipality was 40%. But authorities stress that for others, who may have solved health, housing or addiction problems, it is not necessarily a failure.

Virginie Darmon, an adviser to the deputy mayor of Paris in charge of business and employment and economic development, believes the scheme has become even more important because of the pandemic. “It’s a serious problem that has been around for years,” she says. “But many Parisians have lost jobs because of the health crisis. It will help the people furthest away from employment.”

Plans to expand throughout France

Marion Levesque, project leader for Association Espaces, which runs the DPH in Hauts-de-Seine, where Atelier Fildavenir is based, agrees that the scheme is of growing importance – but outlines two targets for improvement.

“Most of the people we help are already housed in shelters,” she says. “While they are definitely in a precarious situation, we would like to reach out to more people still living on the streets. At the same time, we would like to increase the number of women that we are supporting. We need to support the most marginalised.”

But Robert Larruina, a lecturer at the Refugee Academy of Vrije Universiteit Amsterdam who is studying a similar refugee integration scheme in the Netherlands, says the DPH must be adapted on a case-by-case basis and take into account the needs of refugees. “I’m cautiously optimistic,” he says. “These kinds of initiatives can be successful only if they bring in the refugee voice and way of thinking.”

For the refugees at Atelier Fildavenir, working among a rainbow of bright patterns and threads, that experience rings true. “At least in France, you can be sure that when you leave work, you will arrive home in one piece,” says Sultani, a 30-year-old Afghan. “Even though I worked in an office before, I’m very happy with this job, and I want to become a professional here.”