The largest urban rooftop farm in Europe opened its doors to the public at the beginning of July – two months behind schedule. Stretching the length of two football fields, Nature Urbaine sits on top of a convention centre in the south-west corner of Paris. The farm began growing herbs, fruit and vegetables just weeks before Covid-19 hit Europe. 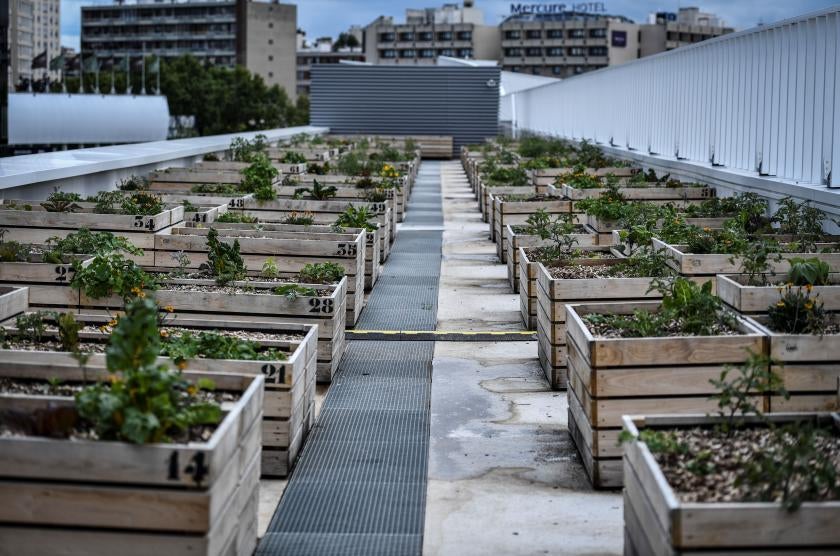 The largest urban farm in Europe, Nature Urbaine, had to pivot its model due to the coronavirus pandemic. (Photo by Stephane de Sakutin/AFP via Getty Images)

Nature Urbaine’s initial plan was to sell produce to restaurants and local businesses in the surrounding area. When France imposed stay-at-home orders, those restaurants and cafés closed overnight. But lettuce and tomatoes don’t stop growing during a global pandemic.

“We had to rethink our entire model just as we were having our first harvest,” says Sophie Hardy, the farm’s site manager.

The farm instead began to sell directly to consumers. The small team of farmers were the only people allowed on the rooftop during the lockdown, and every morning they would harvest fruit and vegetables grown from seeds sown in March. They sold the resulting food baskets to residents in front of the 15th Arrondissement’s town hall the same day.

“The crisis marked a moment when people living in the city wanted to opt for healthy, quality products found locally,” she explains. “There was a boom in producers’ selling their produce directly and a new awareness that local producers were in danger – and, in echo of that, that France’s own position as a leader in the food industry was in danger.”

This fact did not go unnoticed by the French government. President Emmanuel Macron said in a speech on 12 March that delegating the nation’s food supply to other countries was “madness” and called to “take back control”.

As Covid-19 spread across Europe that month, European countries re-erected invisible internal borders, slowing down or even halting entirely cross-border food supply chains. Storage vehicles piled up at borders, and seasonal farm workers, hunkered down in lockdown, couldn’t get to fruit-picking jobs. Some lorry drivers refused to drive across a continent in the grip of a pandemic.

Fearing seeing fruit and vegetables rot in the fields, the government told businesses and consumers to focus on stocking and buying French food products.

In Paris, where residents weren’t allowed to go further than 1km from their homes, some local producers thrived.

The city’s Socialist mayor, Anne Hidalgo, has long championed urban agriculture. In 2016, Paris’s city hall unveiled Parisculteurs, a call for ecological and agricultural projects that would receive start-up money. Since then, the platform has funded 38 new urban farms, which produce 800t of fruit and vegetables every year.

One of Hidalgo’s principle ideas in her recent, successful re-election campaign was the idea of the “15-minute city”, a way to rethink urban proximity. The concept aims to turn one of Paris’s drawbacks, its density, into its strength: residents should be able to access every conceivable service within 15 minutes of their homes, from health centres to bars, restaurants and schools. The city wants to make everything more accessible – including locally grown produce.

La Caverne is one local producer that saw a financial benefit from the lockdown. On the other side of the city from Nature Urbaine and 10m underground, mushrooms and endives flourish in a former car park that has been transformed into an urban farm.

“For the first time, people realised the value of local agriculture,” explains La Caverne’s co-founder Jean-Noël Gertz. “Local producers were able to sell their products at a fair price. They didn’t have a problem finding places that would sell their products, nor did they have to compete with tomatoes from Morocco.”

Although the Covid-19 crisis didn’t entirely rupture traditional supply chains, urban agriculture professionals are hoping that the last few months have proved the importance of a diversified local food supply.

“Urban farms are an essential way of rethinking the cities of tomorrow,” says Anouck Barcat, president of the French Association of Professional Urban Agriculture. “It’s one of the tools to make a city more resilient. They have so many benefits – we don’t make mono-functional farms.”

There are a number of environmental advantages to urban farms, not least of all their carbon footprint. An urban farm can sell fresh strawberries just metres from where they were grown, rather than having them travel hundreds of miles in a refrigerated container.

Another advantage of urban agriculture is its flexibility: it can slot into the negative spaces of the city, like abandoned railways, empty metro stations and even up the sides of buildings.

“We don’t need to be Haussman,” Barcat jokes, referencing Paris’s most notorious urban planner, who sliced up the city in the 19th century to create its wide avenues and tree-lined boulevards. “We’re not cutting through the city to make way for farms. They can go wherever there’s space: on roofs, in polluted areas, in car parks. We already have the solution for these spaces.”

One criticism leveled at urban farms is that the small yields don’t justify their expense. But both Barcat and Hardy are keen to insist that urban farms should not compete with, nor try to replace, traditional rural agriculture but exist in parallel with it.

“We can’t cultivate every type of crop, and anyway, we’re not able to produce enough to feed the entire city. But the crisis has shown that urban agriculture has its place in the city and that this model works,” says Hardy.

France began to ease its lockdown on 11 May. Paris’s restaurants and cafés have reopened, and the city’s open-air street markets are once again selling peaches from Portugal and strawberries from Belgium. The farmers at Nature Urbaine now only have to walk a few metres to deliver their produce to Le Perchoir, the chic cocktail bar and restaurant sharing the same rooftop.

Barcat is philosophical about the slow rise of urban farms but says that France’s capital has already seen a shift in thinking.

“Of course, some people will go back to their old habits. But others won’t. [The pandemic] has opened up new possibilities. My hope is that the ordinary Parisian will start to introduce more food grown locally in their consumption habits. We’re not going back to zero.”

Catherine Bennett is a journalist based in Paris.

Topics in this article : Covid-19 , Hospitality